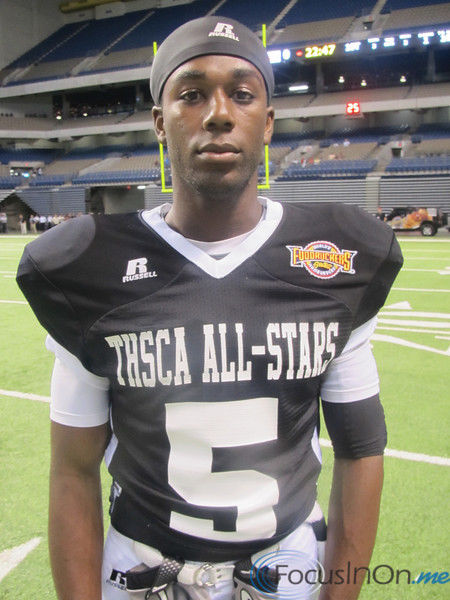 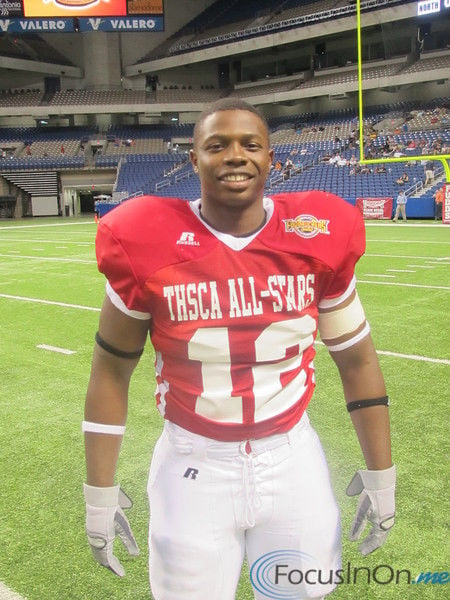 Frankston's Treston Coleman poses before the THSCA All-Star football game on Tuesday in San Antonio. Coleman, who played for the South, will play for UT San Antonio in the fall. (Phil Hicks | ETFinalScore.com)

Frankston's Treston Coleman poses before the THSCA All-Star football game on Tuesday in San Antonio. Coleman, who played for the South, will play for UT San Antonio in the fall. (Phil Hicks | ETFinalScore.com)

SAN ANTONIO — A number of East Texans and area junior college signees got a chance to play one more time as prep stars on Tuesday.

The North broke out to an early lead and scored a 30-16 win over the South in the 78th Annual Texas High School Coaches Association All-Star Football Game at the Alamodome.

“It was a lot of fun,” Henderson cornerback LaMarcus Brown said. “I want to thank God for giving me a chance to play in the game; and to my coaches for nominating me; and, of course, my teammates.”

Brown, who will report to Stephen F. Austin on Thursday, had five tackles from his cornerback position.

Other East Texans on the victorious North were Longview’s Eric Hawkins, who had three catches for 37 yards; and linebacker Blake Ward of Eustace, who had two tackles. Hawkins must report to Arkansas today, while Ward heads to the Air Force Academy.

For the South, Treston Coleman of Frankston and Reginald Davis of Tenaha played well in defeat.

Coleman rushed for 18 yards while Davis had three rushes for 11 yards and five catches for 55 yards. Davis scored on a 25-yard TD catch on the final play of the game and a two-point conversion pass.

“What a great experience,” said Coleman, who signed with UT San Antonio and has spent the summer in the Alamo City. “It was an honor to play.”

Davis added: “It was fun. I wish we could have played better. It was awesome getting to play with and against players from all over Texas.

North linebacker Lance Duran of Austin Westlake was the defensive MVP with 2.5 tackles and a fumble recovery. He will attend Blinn College. North running back Aiavion Edwards of Stephenville was offensive MVP. Edwards, who will attend Baylor, had 74 yards on nine carries.