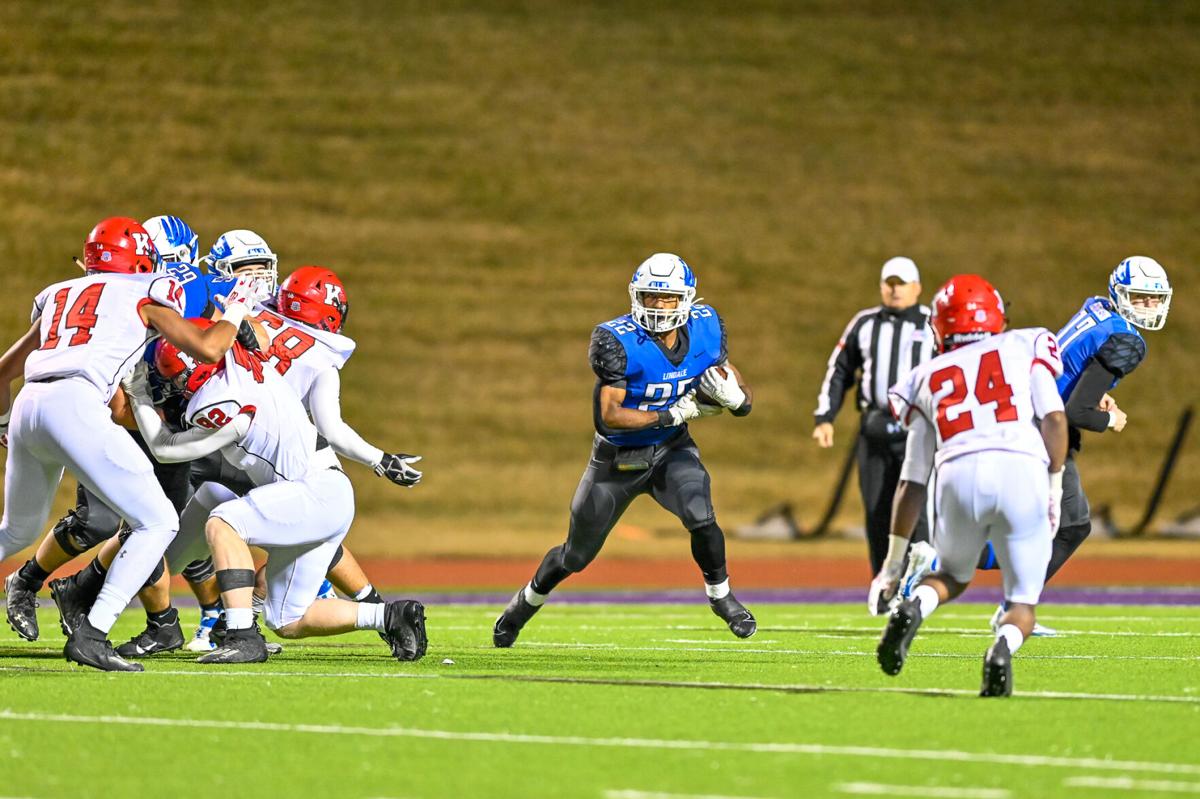 Lindale’s Jordan Jenkins (22) runs to the left side against Kilgore in the second quarter Friday night at Homer Bryce Stadium in Nacogdoches. 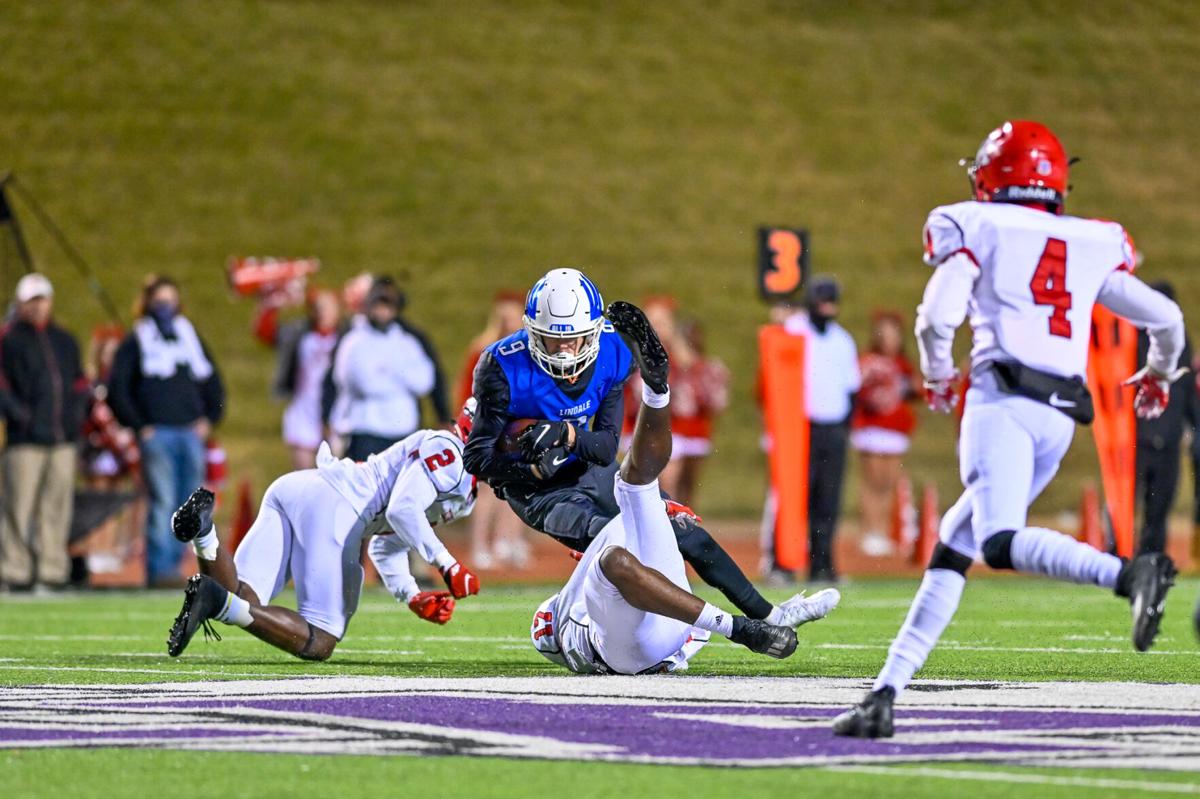 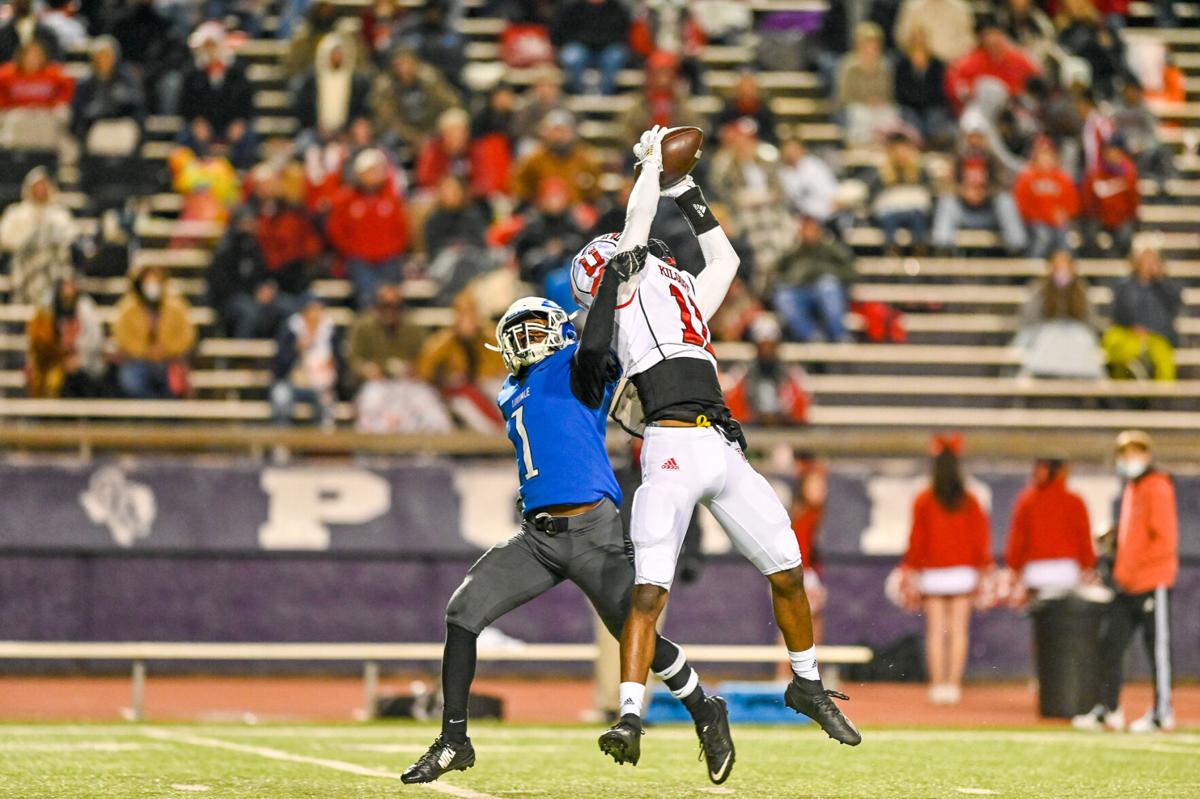 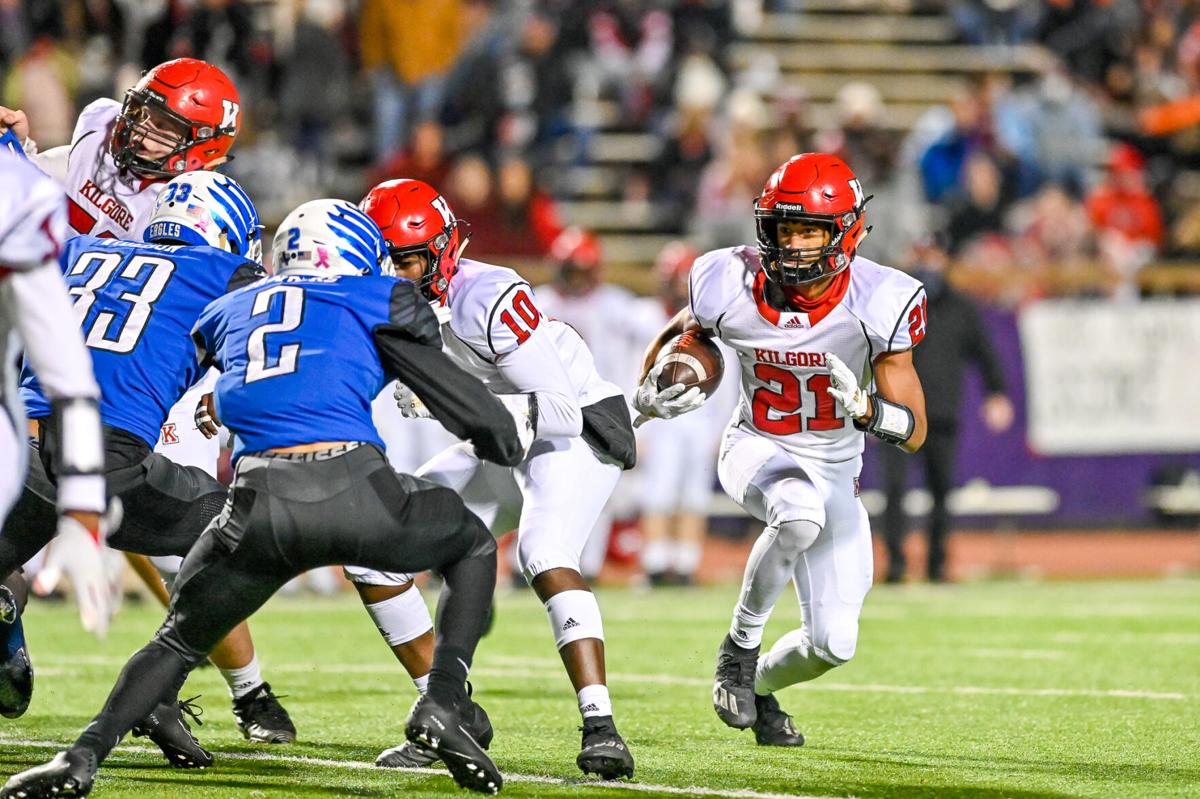 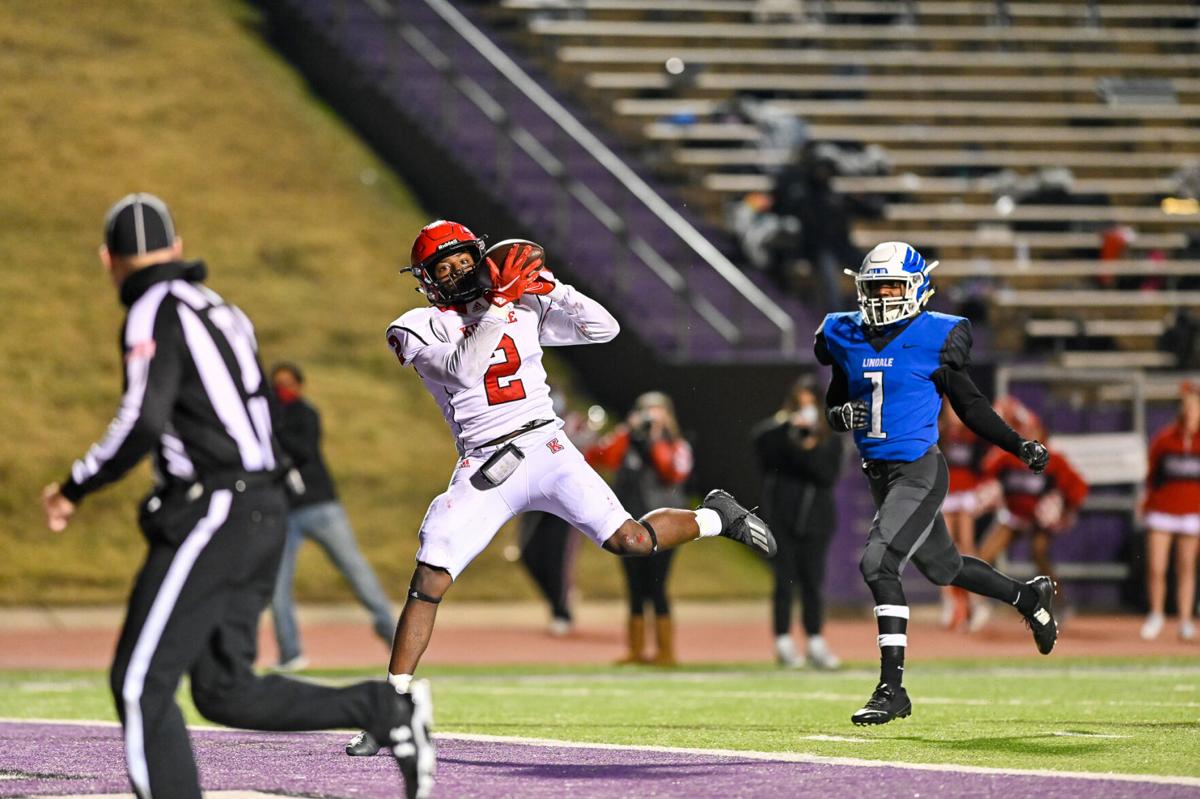 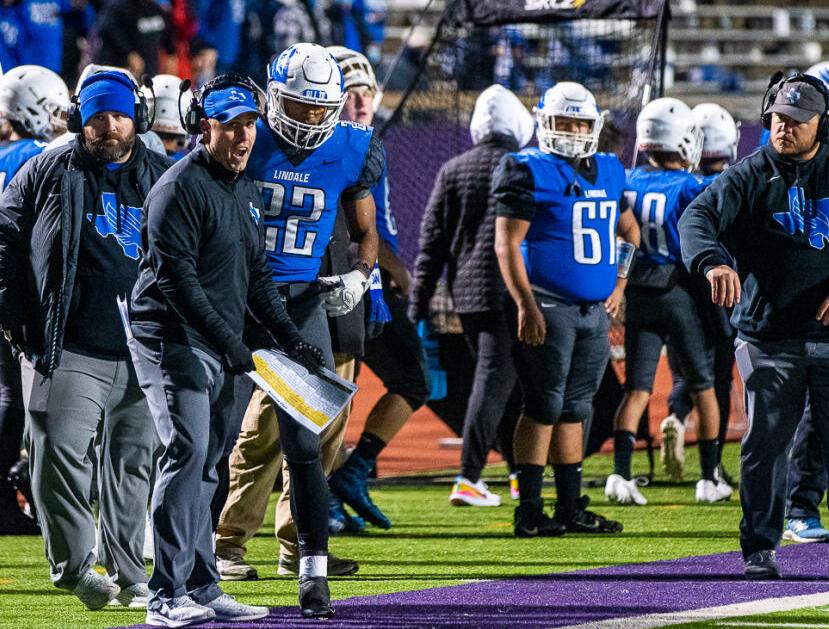 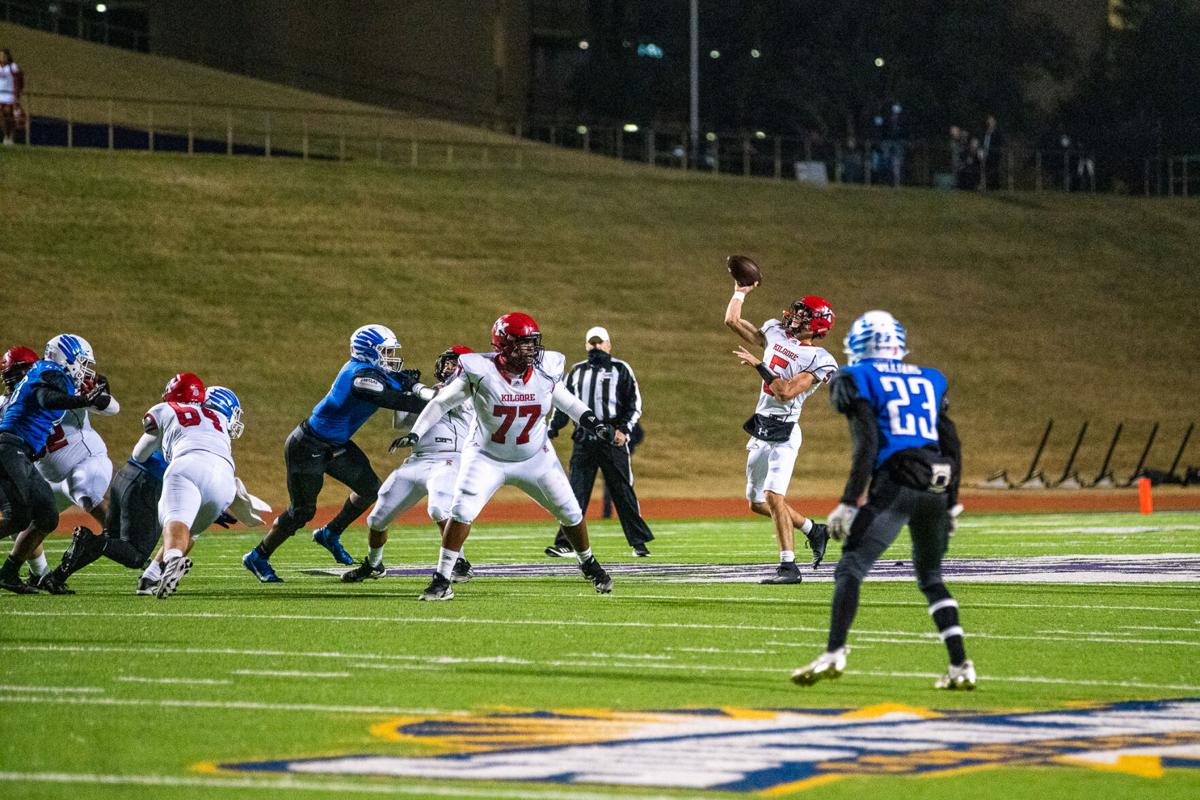 Lindale’s Jordan Jenkins (22) runs to the left side against Kilgore in the second quarter Friday night at Homer Bryce Stadium in Nacogdoches.

NACOGDOCHES — Friday’s state quarterfinal showdown between Lindale and Kilgore — a rematch from the regular season finale — lived up to the billing.

And Lindale four-star running back Jordan Jenkins continued to add to his résumé.

Jenkins rushed for 257 yards on 39 carries and found the end zone seven times to give Lindale a 56-42 victory at SFA’s Homer Bryce Stadium, sending the Eagles to the state semifinals for the first time in program history.

“It’s special,” Lindale head coach Chris Cochran said. “It means so much ... to the dudes who were on this field doing it. They worked extremely hard. They believed they could do it. They aren’t surprised by this. That’s why I’m proud of them. It means a lot to our school and to our community. We’ve got a lot of people following us and are excited about us. I’m just glad we get to continue to keep playing. It’s a special deal.”

Lindale will meet either Corpus Christi Miller or Austin LBJ in the state semifinals for the right to play in the Class 4A Division I state championship on Dec. 18 at AT&T Stadium in Arlington. CC Miller and LBJ are scheduled to play at 2:30 p.m. Saturday in San Antonio.

In the first meeting between Lindale and Kilgore, Jenkins ran for 321 yards and six touchdowns in a 47-40 Eagles win.

Kilgore actually kept Jenkins in check through the first 24 minutes, holding him to 58 yards on 12 carries. He did find the end zone twice, though.

But in the second half, Jenkins made sure his Eagles weren’t done playing, carrying the ball 27 times for 199 yards and five touchdowns.

Jenkins’ first touchdown of the night came with 6:59 left in the second quarter on a 2-yard run to put Lindale up 6-0 after the extra point was no good.

Kilgore got all the way down to the 2-yard line on the next drive. DJ Walton and Levi Thornton knocked Trayveon Epps back for a 7-yard loss on third down, and the fourth down pass was incomplete.

After converting a fourth down on a fake punt, Lindale completed a 91-yard drive with a 13-yard touchdown pass from Sam Peterson to Jaymond Jackson to make the score 13-0 with 51 seconds left in the first quarter.

Kilgore finally got on the scoreboard with 7:18 left in the second quarter as Dalton McElyea found Donovan Adkins for a 37-yard touchdown.

The Eagles came right back less than two minutes later with a 6-yard touchdown run by Jenkins to push the score to 20-7.

McElyea and Adkins were at it again as Kilgore needed just four plays to go 72 yards, capped by a 31-yard pass from McElyea to Adkins with 2:36 left in the half.

After a Lindale punt, McElyea went to the air again and threw a 13-yard touchdown pass to Brian Brown with 43 seconds left in the half to take a 21-20 lead.

Lindale got the ball first in the second half and a strong kickoff return by Jacob Seekford set the Eagles up near midfield. That allowed Jenkins to carry the ball four times and finish the drive with a 1-yard touchdown to put Lindale back in front.

With Kilgore backed up to its own end zone, the Eagles got pressure on McElyea and nearly got a safety. However, the ball was fumbled and recovered by Cody Swaim at the 2-yard line. Jenkins ran it into the end zone on the next play and ran in the 2-point conversion to make the score 35-21 with 7:35 to play in the third quarter.

Kilgore started mounting a comeback as McElyea connected with Jermaine Roney for a 60-yard touchdown with 1:10 left in the quarter. With 8:48 remaining in the game, Trayveon Epps scored a 7-yard touchdown to cut the score to 42-35.

Jenkins added touchdown runs of 4 and 31 yards with 5:43 and 3:33 remaining to put the Eagles back up by 21. McElyea threw one final touchdown pass to Cade Pippen with 2:32 left.

Kilgore attempted an onside kick that was recovered by Lindale, and Jenkins and the Eagles were able to pick up enough first downs to run out the clock.

Christian King and Jackson were among the defensive standouts for the Eagles.