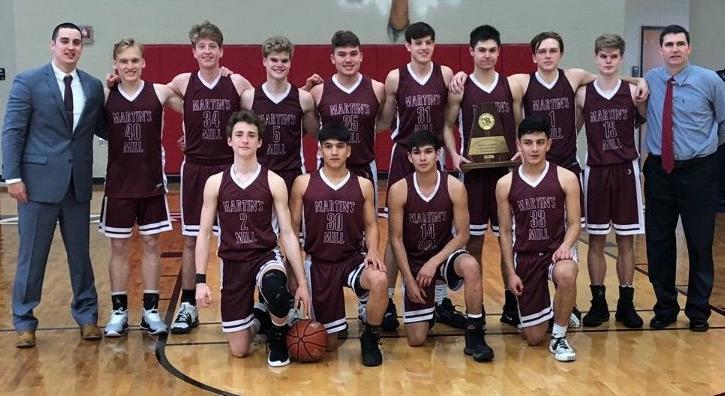 “They feed off each other’s energy,” Bell said from San Antonio. “They play defense together; they don’t care who gets credit. They are truly One Unit Strong.”

Thus far the Mustangs have been perfect on the court, compiling a record of 39-0 and earning a berth to the UIL state basketball tournament for the second straight year.

The experience of last year should help the Mustangs in 2020.

Martin’s Mill will meet San Saba (21-8), appearing in the state tournament for the first time since 1928, in the Class 2A semifinals on Friday. Tipoff is scheduled for 8:30 a.m. at the Alamodome in San Antonio. The other 2A semifinal follows and has Shelbyville (36-3) meeting Gruver (30-5) at 10 a.m.

The championship game is scheduled for 1:30 p.m. Saturday.

“They get along on and off the court. They are such a great group,” Bell said of his Mustangs. “We always talk about that no one remembers the number of points someone scored or individual stats. Everyone looks at the number of banners in the gym.”

Last year, the Mustangs lost to Gruver 55-42 in the state semifinals.

NOTES: San Saba is the Armadillos. The school is located about 87 miles northwest of Austin. In 1855 ranchers and cotton growers first settled the banks of the San Saba River, from which the settlement took its name according to The Handbook of Texas online. San Saba calls itself the “Pecan Capital of the World.” ... Bell won his 200th career game earlier this season when the Mustangs defeated Sulphur Springs North Hopkins on Feb. 17.