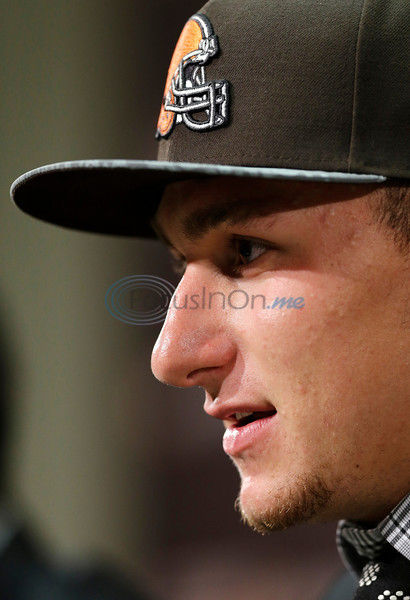 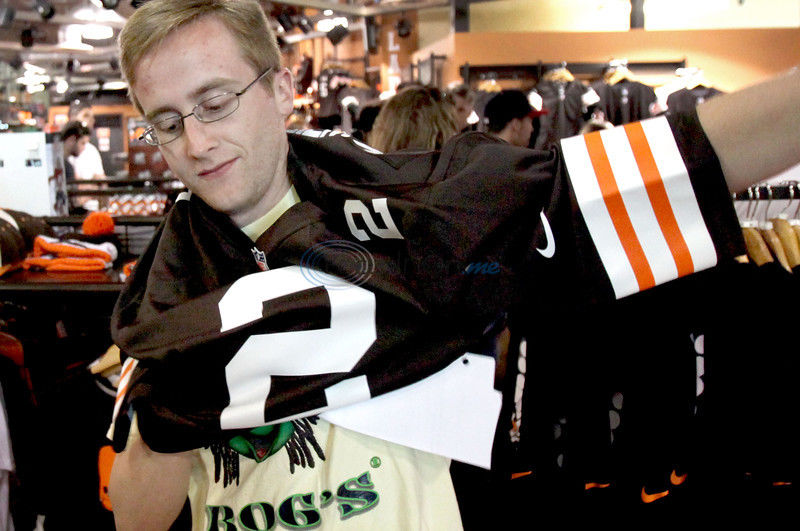 Football fan Ryan Pfefferle tries on a Cleveland Browns' Johnny Manziel jersey from the Browns team shop at FirstEnergy Stadium in Cleveland, Friday, May 9, 2014. The Browns selected the Texas A&M quarterback with the 22nd overall pick in the first round of the NFL Draft. (AP Photo/The Plain Dealer, Marvin Fong) MANDATORY CREDIT; NO SALES

Football fan Ryan Pfefferle tries on a Cleveland Browns' Johnny Manziel jersey from the Browns team shop at FirstEnergy Stadium in Cleveland, Friday, May 9, 2014. The Browns selected the Texas A&M quarterback with the 22nd overall pick in the first round of the NFL Draft. (AP Photo/The Plain Dealer, Marvin Fong) MANDATORY CREDIT; NO SALES

BEREA, Ohio — Johnny Manziel held up his new brown No. 2 jersey and flashed a smile that beamed to Texas. With whirring cameras providing the soundtrack, he was welcomed to his NFL home.

Cleveland may never be the same.

Humble, confident and charmingly comfortable in handling any question, Manziel was introduced Friday by the Browns, who positioned themselves perfectly in the first round of the draft to select the polarizing Texas A&M quarterback with equal amounts of skill and swag.

Sitting alongside fellow first-round pick Justin Gilbert, a cornerback from Oklahoma State taken 14 picks ahead of him, Manziel said he's stepping into a life he believes will be even crazier than his college days.

"I'm going into it expecting madness," he said.

Manzelmania hit Cleveland like a spring thunderstorm Friday. As of 6 p.m., the Browns had sold 2,300 season tickets — renewals and new purchases — since the start of Thursday's first round. In the hours after Manziel was chosen with the No. 22 overall pick, the team's sales staff struggled to keep up with phones that barely stopped ringing.

At the team's gift shot in FirstEnergy Stadium, fans waited in long lines to buy Manziel jerseys at $150 a pop.

The 2012 Heisman Trophy winner took all the attention in stride. He's used to it, having had his every move on and off the field chronicled since the first time he scrambled out of the pocket and made a magical play for the Aggies.

"It means a lot to me, obviously," Manziel said about Cleveland's hyped reaction. "I've gotten a lot of support already, but there's work that needs to be done."

Manziel said he doesn't carry the burden of being Johnny Football, the kid who turns giant stadiums into his personal playground and the one who occasionally hangs out with rap stars and LeBron James.

"I'm Johnny Manziel," he said. "Johnny Football is what I am in the media and what is out there. I accept it and I'm very accepting of it. At the same time, I know who I am. I'm Johnny Manziel from Kerrville, Texas. I don't let that get to me too much or let all that weigh me down or ever make me lose sleep at night."

As he spoke, Gilbert quietly took it all in as he sat next to his famous teammate. Gilbert confessed to getting caught up in Manziel's selection while he was in New York.

"I was on my way back to the hotel and I think my mom or somebody told me that we had Johnny Manziel so I let down the (car) window and started screaming, ‘Cleveland Browns, Cleveland Browns we're here,'" he said. "I'm excited he's here. I expect nothing but the best from him."

The Browns have been waiting for someone, anyone like Manziel for years.

The team has started 20 quarterbacks since 1999, a roll call that begins with Ty Detmer and includes first-round busts like Tim Couch, Brady Quinn and Brandon Weeden. Manziel's well aware of the Browns' failings and hopes to be the one to solidify things.

"I have goals for myself, expectations," he said. "But I feel like if I put in the time necessary and I do what I'm supposed to do and really open myself up to these coaches and let them teach me and mold me into being a good football player and continue to build on what I did the past couple years as far as getting better year by year, piece by piece, then I'll have some success. I'll believe that."

Manziel knows there are those who feel his size will limit his success. He's the first QB under six feet to be taken in the first round since 1953.

"You can measure height," he said. "You can't really measure heart."

Manziel will compete with Brian Hoyer to open next season behind center. Hoyer started two games before sustaining a season-ending knee injury in 2013, but is the incumbent. When he was told by general manager Ray Farmer that the team was drafting Manziel, Hoyer said, "bring it on."

"I wouldn't expect anything less," he said. "He's a competitive guy. I feel like that's exactly what I want in a teammate."

Manziel has spent most of the past two years in a fishbowl, so it was no surprise that photos of his post-draft celebration in New York with family and friends, including Drake and Cavaliers All-Star guard Kyrie Irving, quickly circulated through social media. One photo showed Manziel swigging from a magnum of champagne.

Asked about his late-night actions, Manziel offered a quick defense.

Manziel intends to shelve the party-boy antics as he strives to live up to his game-changing reputation and show the Browns they made the right move in drafting him. He's not looking for any special treatment and intends to earn the trust and faith of teammates.

"I'm low guy on the totem pole," he said. "I know my place. More than anything I need to show these guys with actions, other than words or anything I can say, to earn their respect. It really is all about earning these guys' respect. I'm going to do all that I can to try and make these guys comfortable with me every day and know that I want what's best for this team.

"I'm going to come in and work extremely hard."