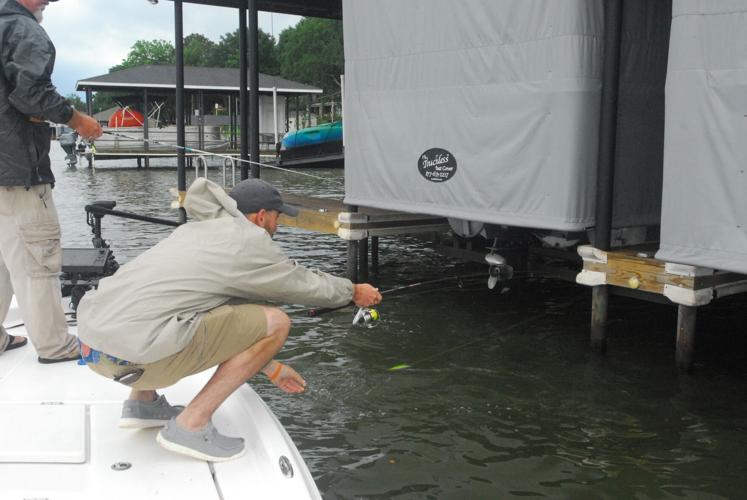 Crappie fishing is not just drowning minnows or sinking jigs anymore. Sometimes it takes shooting jigs to find fish hiding under boathouses to fill out a limit. 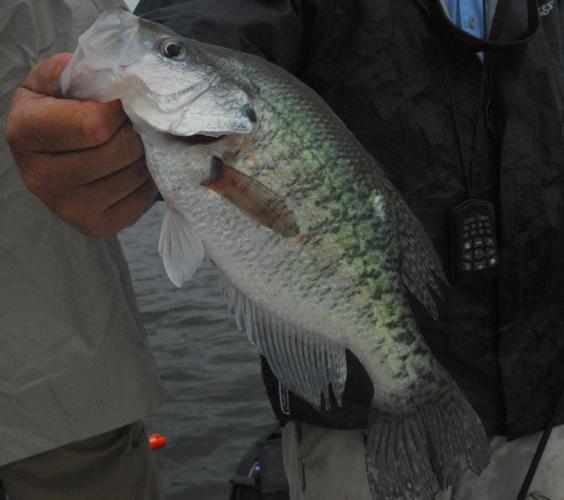 Crappie fishing is not just drowning minnows or sinking jigs anymore. Sometimes it takes shooting jigs to find fish hiding under boathouses to fill out a limit.

SEVEN POINTS — Cedar Creek Lake and Lake Palestine at some points sit within the same county, but when it comes to fishing they are worlds apart.

The 32,000-acre Cedar Creek Lake, situated in western Henderson County, has always been known more as a recreational lake for skiers, but it is also a good fishing lake for white bass, catfish and crappie.

The western portion of the 25,000-acre Lake Palestine also sits in Henderson County, but it is better known for its largemouth bass, crappie and catfish. White bass are a relative newcomer in the lake, but still thrive. You ski at your own risk in much of the lake.

R.D. Myers has been guiding crappie fishermen on Cedar Creek for eight years, and like a lot of guides has learned the value of LiveScope fish finding technology on a lake where most structure comes in the form of fishermen-sunk brush and mansion-like boathouses that serve mansion-like lake homes.

Fishing with my son, Thomas, we were like fish-out-of-water not knowing what to expect as Myers eased his big center-console boat up over the first brush pile, one of about 2,000 waypoints he has marked on the lake. Getting the trip started had been an iffy proposition because it came during East Texas’ recent monsoon season, and just hours before we were to leave the ramp another storm blew through the area churning the lake into an even darker chocolate.

“Our best months are April to October. We started off good this year, but it has slowed down,” Myers, one of a handful of full-time guides on the lake, said. Cedar Creek seems to be experiencing the results of February’s cold, a brief early warm-up, and then an unusually cool and wet spring for Texas.

“Not all of the crappie have spawned. I am still finding eggs in them,” Myers added.

As Myers hovered over the first brush pile, Thomas and I sunk jigs while he went with a minnow on an exploratory mission. The spot only produced one small fish, but the view from the LiveScope showed what fishermen on Cedar Creek had to work with.

The main difference compared to Lake Palestine is how the two were built. Developed by the Tarrant County Water District, Cedar Creek was cleared for the most part of all timber during construction except the far upper end. What structure is available is man-made, and while fishermen have sunk plenty of brush piles over the years some have deteriorated.

While Myers said under normal conditions 50-fish, two-man limits are easily attainable on Cedar Creek during the spring and summer, so far this year it has meant being creative. After trying more piles and boating a few fish, Myers suggested shooting boathouses. With the water temp in the low 70s and the water off-color, conditions were not perfect, but he had had some success with it this year.

Shooting is a technique where the fishermen takes the jig in one hand with about half a rod’s worth of line, bends the rod almost double and then shoots the jig up under the boathouse.

“Not every boathouse has fish, but if you can find a large one just off a point, it usually has them,” Myers said.

His theory is that the crappie hide in ambush in the shade of the boathouse where they can see better. When the baitfish swim under, they attack.

His technique is to close the bail as soon as the jig hits the water, let the bait sink to the bottom before ripping it three or four turns, then letting it sink again and fishing to the outside of the boathouse. Fishing from a center-console boat helped make fishing the technique easier than it looks.

It seemed to be the ticket on this day at least with the bulk of our fish coming from three or four boathouses scattered around the lake. The majority of the rest came off a log laying in 14 feet of water. While I remained with the jig, Thomas joined Myers in fishing minnows. With a weight rigged about 8 inches above the hook, Myers suggested hooking the minnow forward through the head so it appeared it was swimming more naturally. It too worked, and while Cedar Creek is better known as a black crappie lake, we ended the afternoon trip with a mixed bag.

Like guides on other lakes around Northeast Texas, Myers stayed busy as fishermen came out looking for something to do during the pandemic lockdown. Many were newcomers looking for a style of fishing that could pick up and would allow them to take home meat. Like the weather, business has started brisk again this year.

“The Lord is not slow in keeping his promise, as some understand slowness. Instead he is patient with you, not wanting anyone to perish, but everyone to come to repentance.”