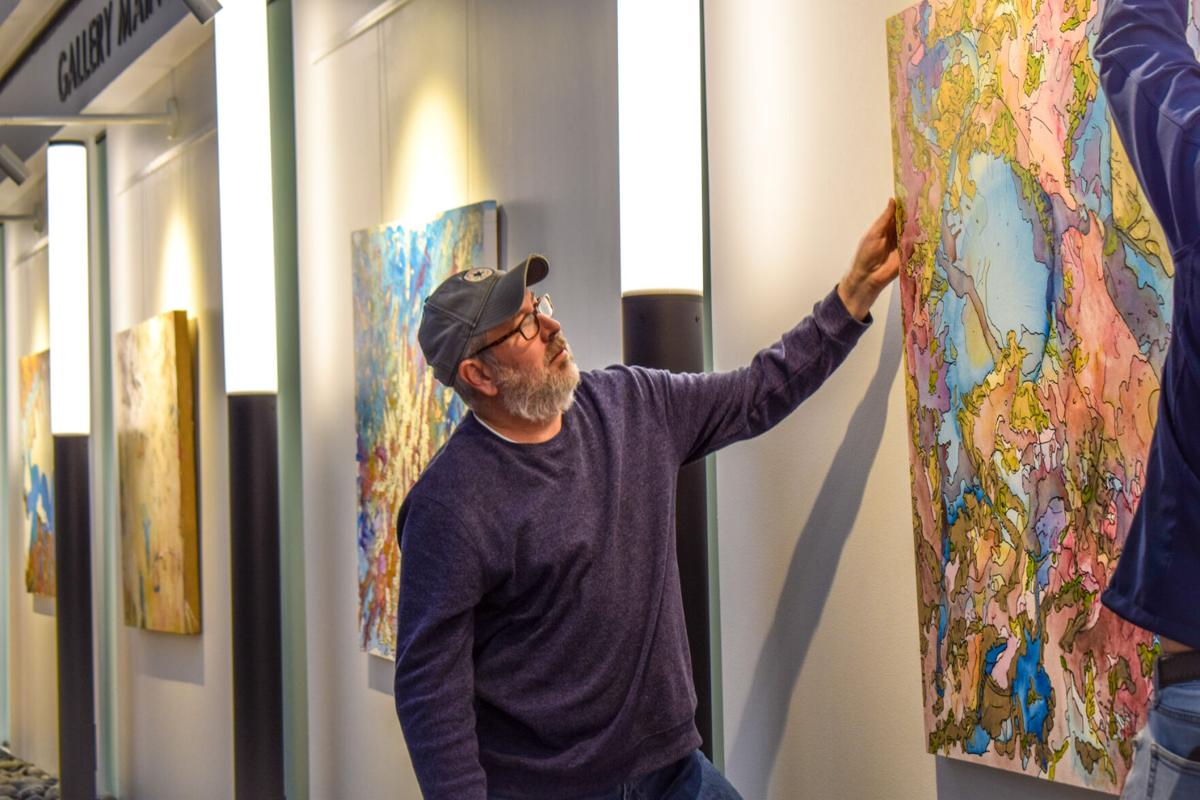 Derrick White, TJC professor and artist, is the first featured artist of 2022 at Gallery Main Street in Downtown Tyler. 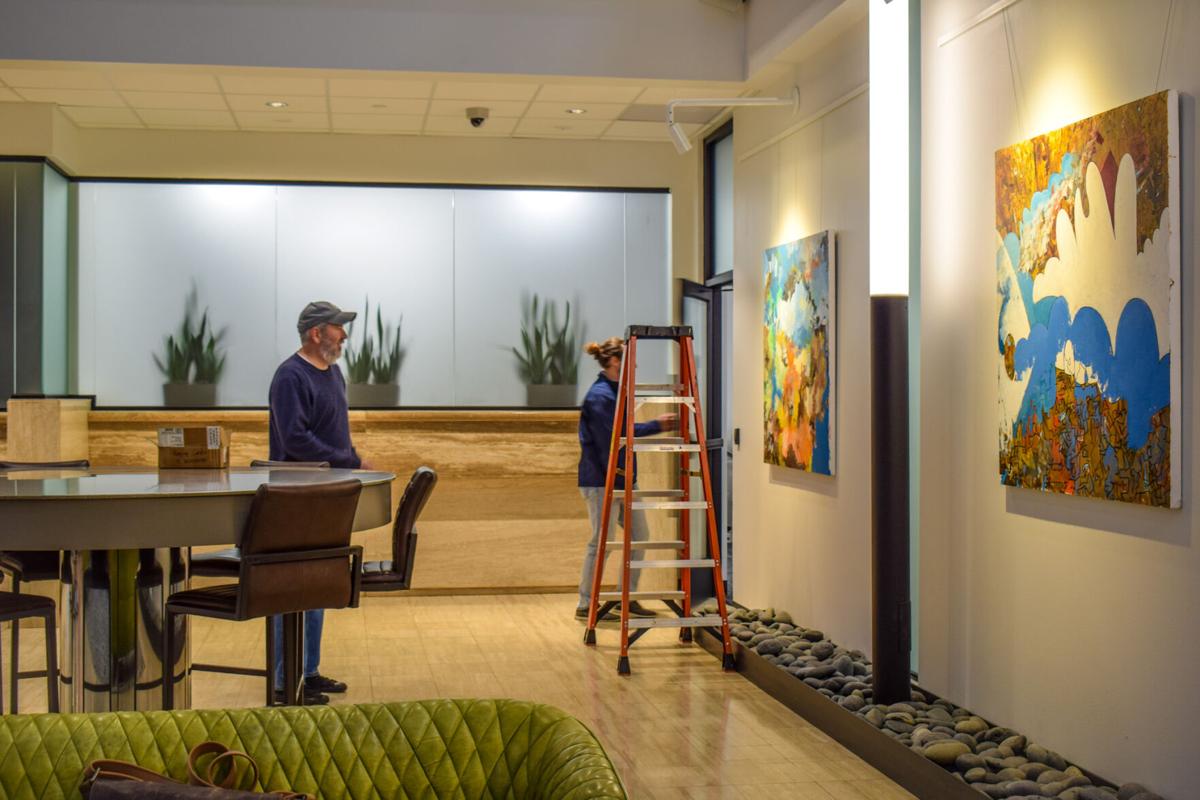 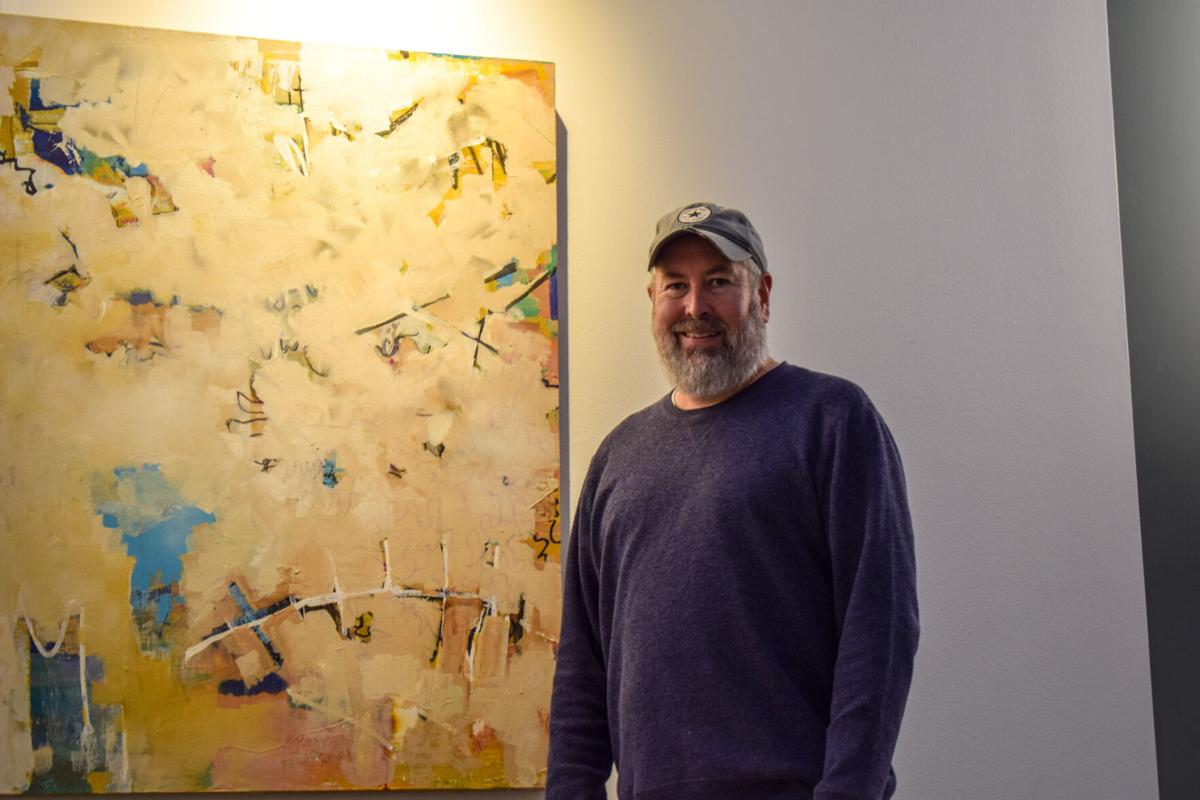 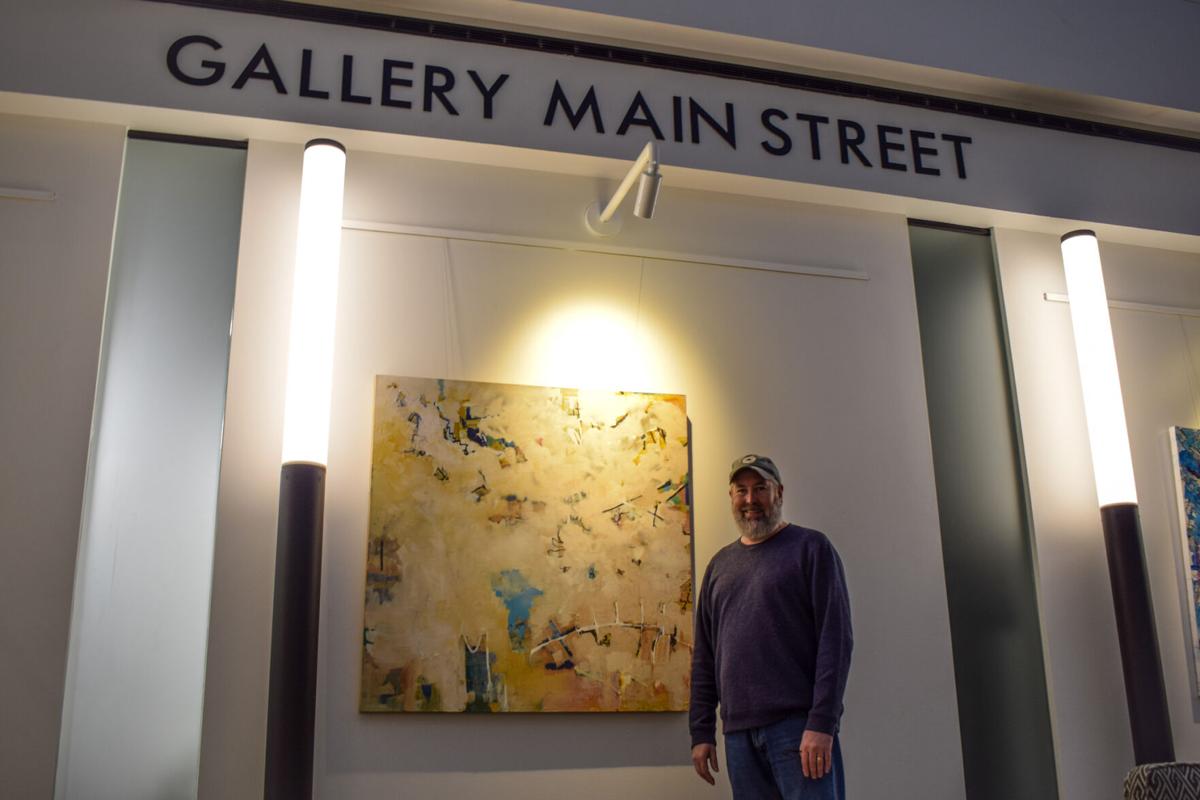 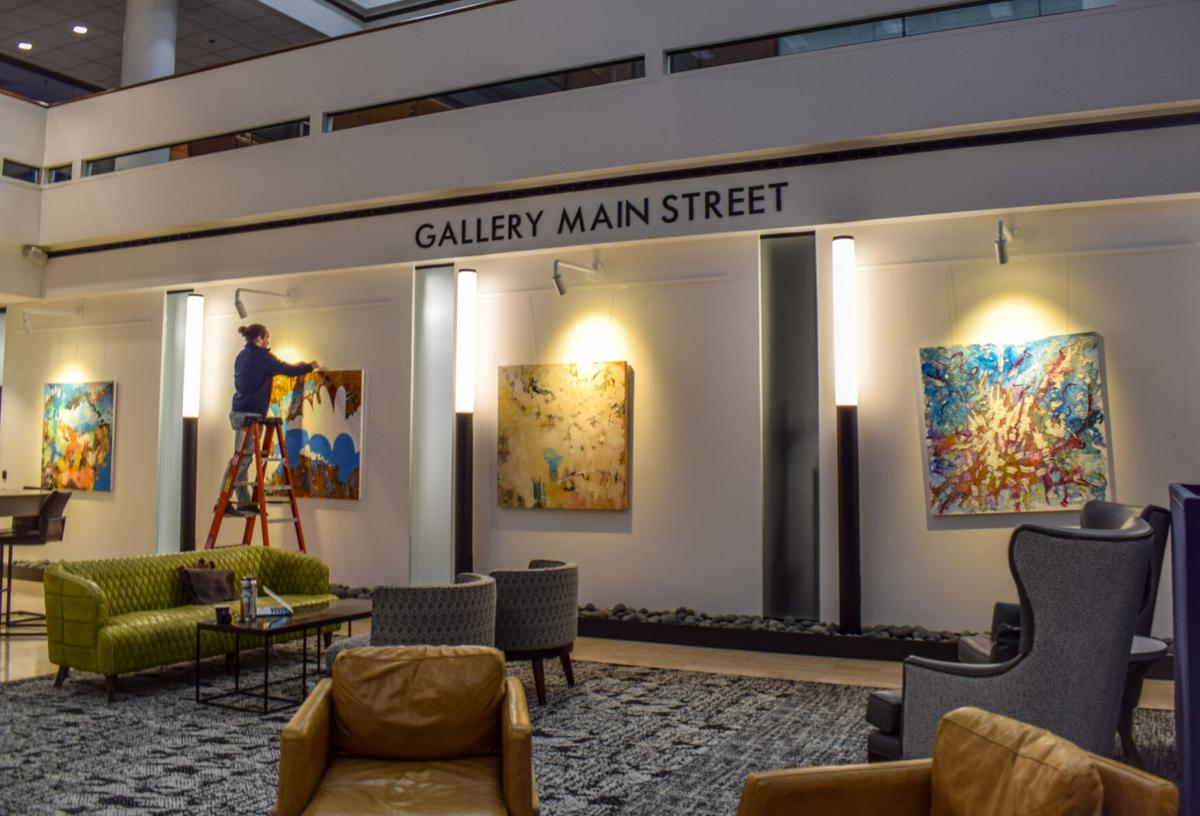 A downtown specialist for the City of Tyler assists White in putting up his artwork at the Plaza Tower. 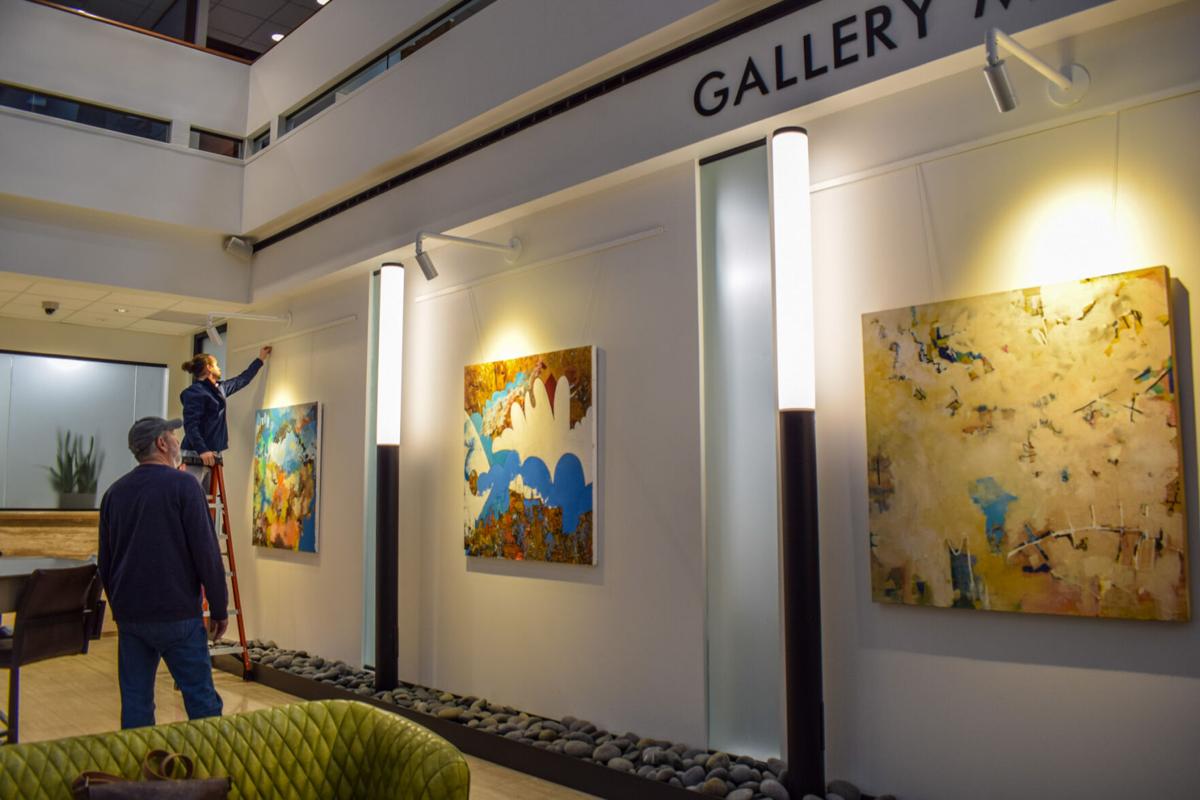 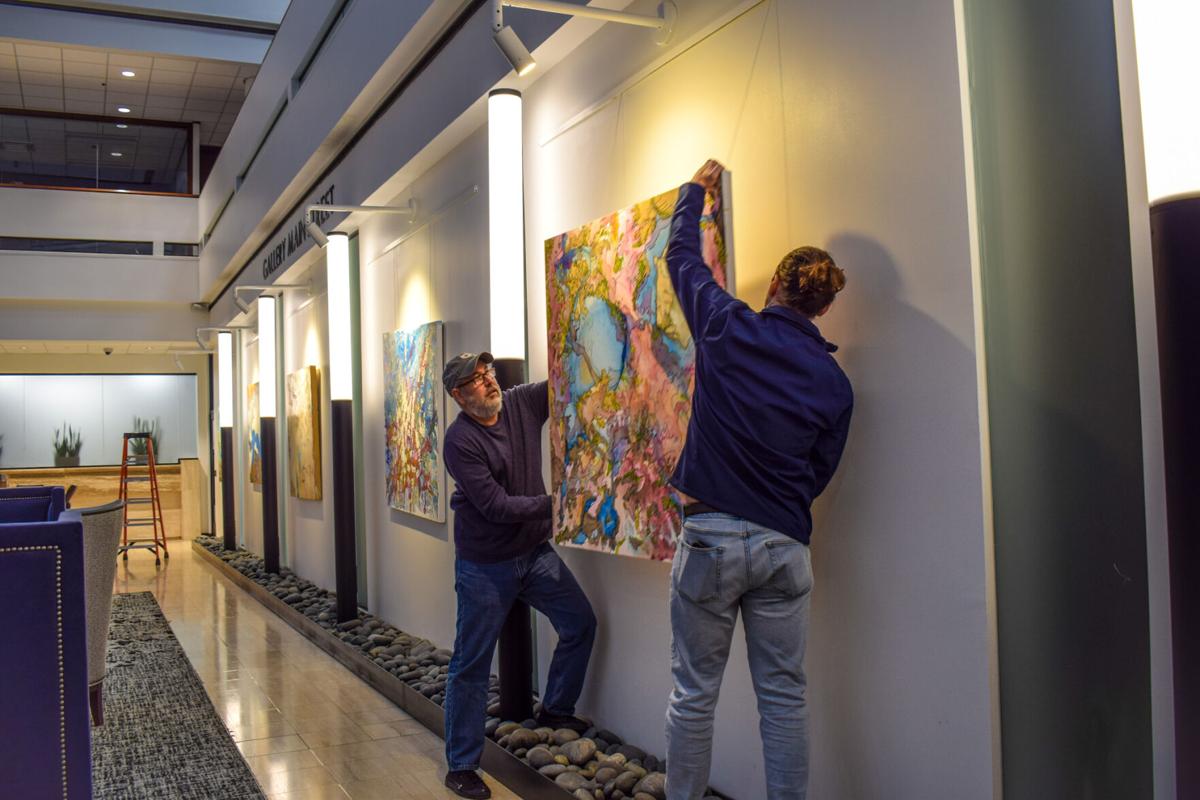 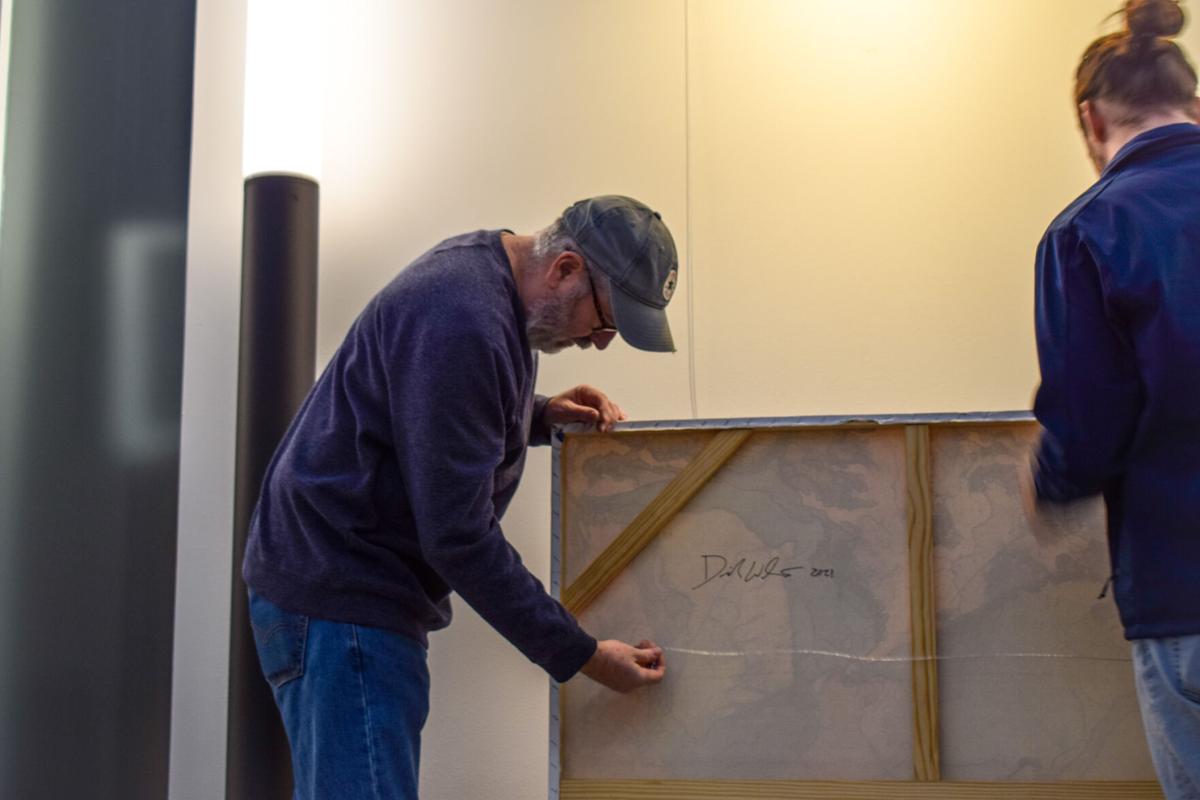 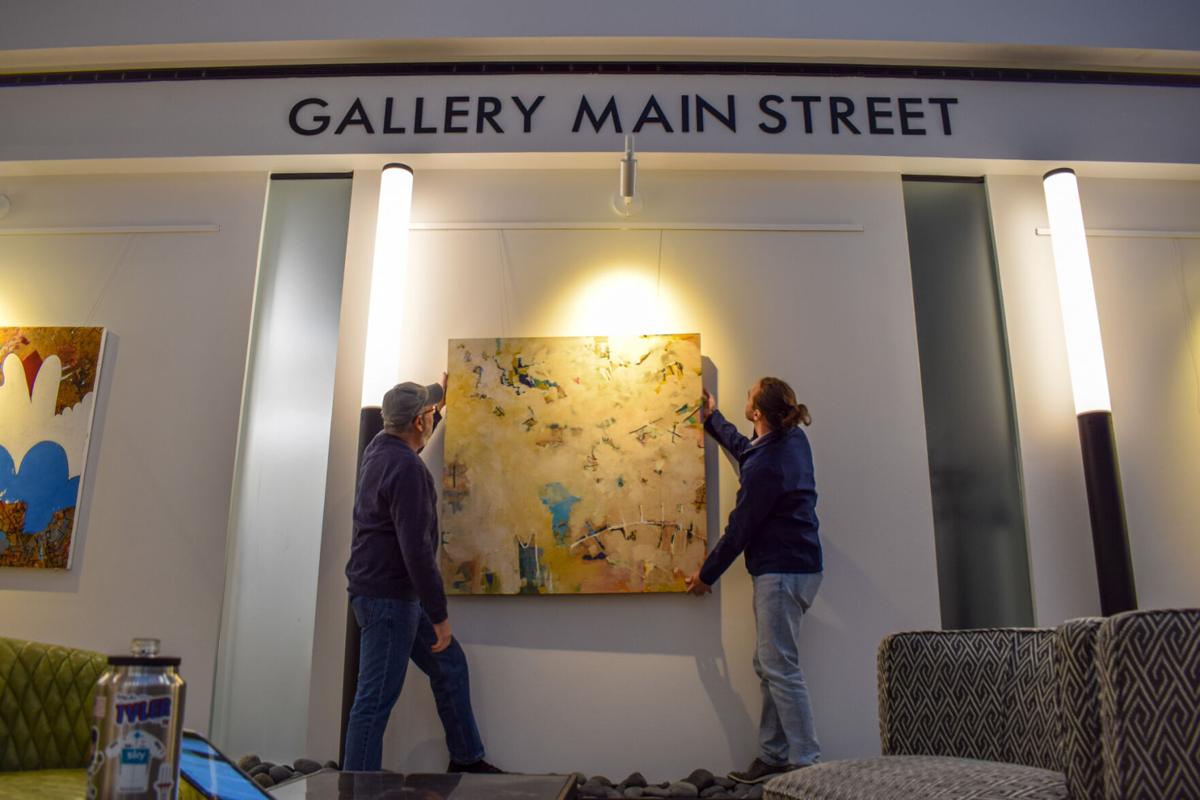 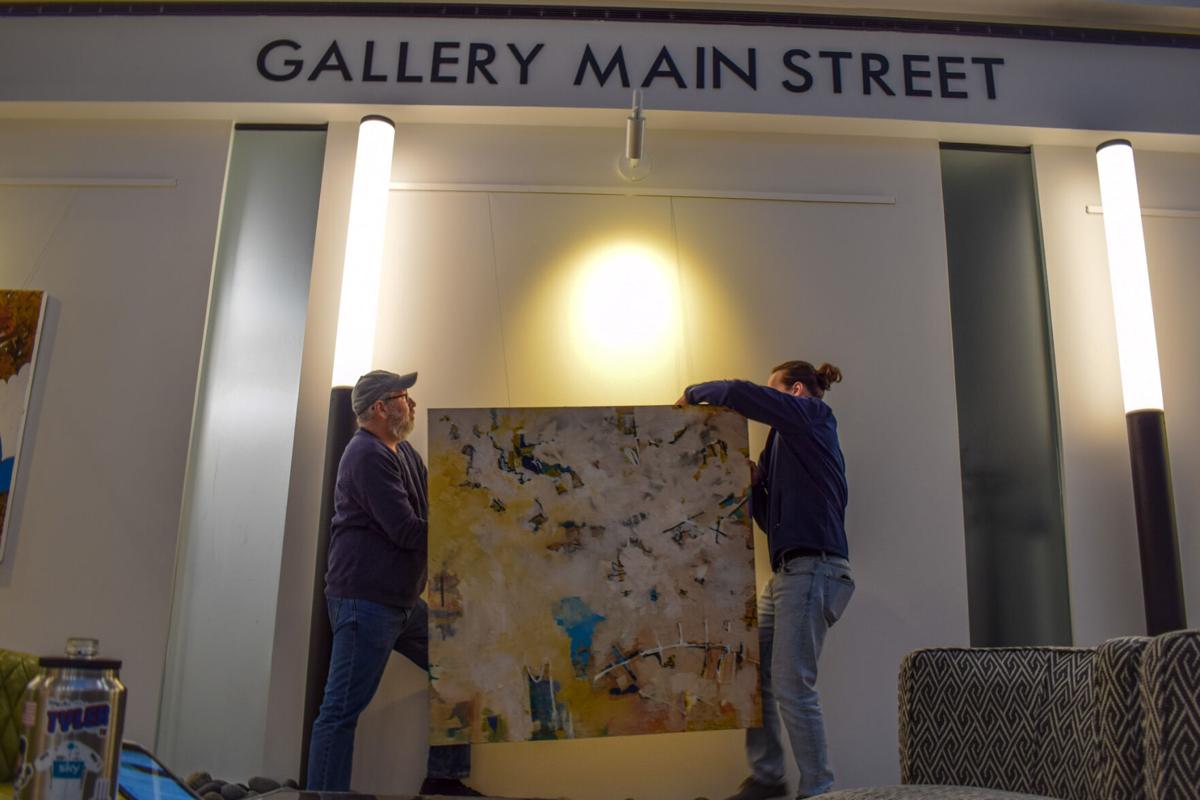 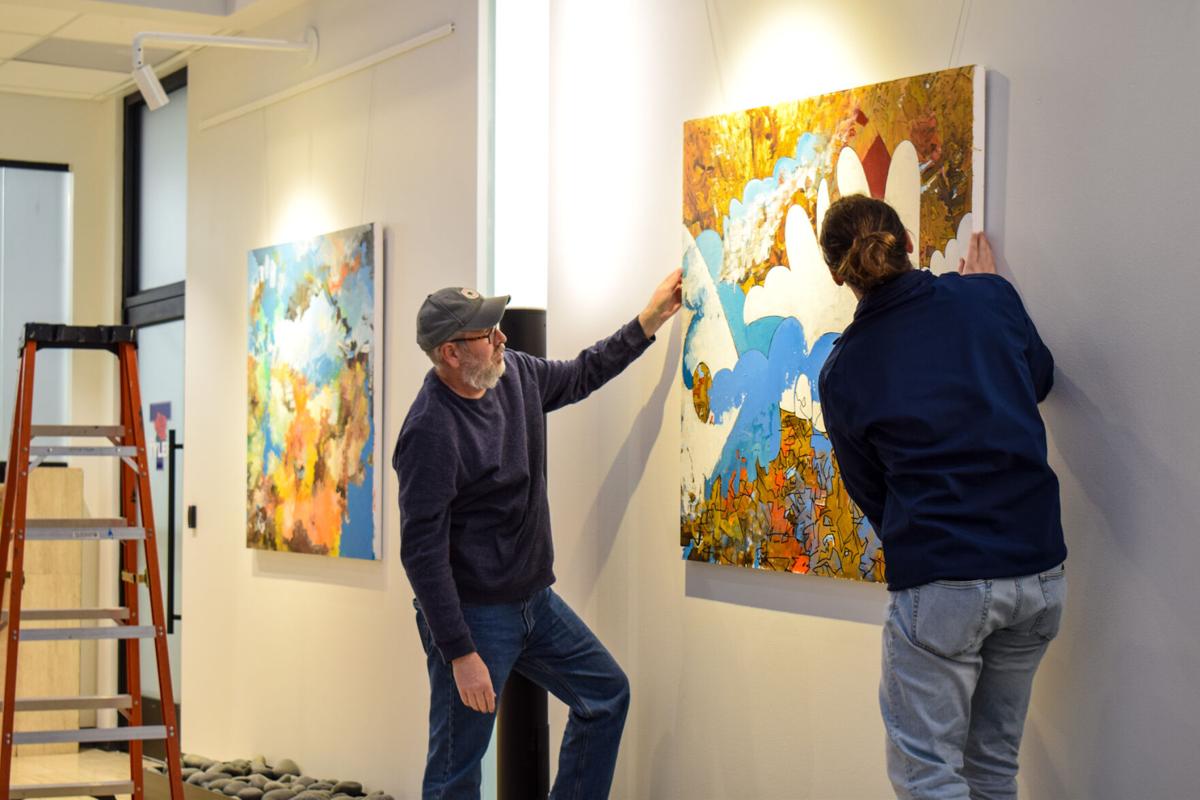 Derrick White, TJC professor and artist, is the first featured artist of 2022 at Gallery Main Street in Downtown Tyler.

A downtown specialist for the City of Tyler assists White in putting up his artwork at the Plaza Tower.

A Tyler artist and Tyler Junior College art professor who has gone through the journey of learning who he is, creating from self-expression and teaching his students to do the same is the first featured artist of 2022 at Gallery Main Street in downtown Tyler.

Derrick White is premiering his exhibit, “The Rivers of My Memory,” which he described as a connection of past and present that flows like a river, such as the color blue across each piece. The collection is made of four new works of art created by White, and an immersive piece, which was created eight years ago.

The four new pieces, two located on the left side of the gallery and two more on the right side, and the middle piece from 2014, show a flow of consistency and a visual vocabulary that fits into body of the work.

His work, mostly made with water-based acrylics and mixed media, which he describes as “organized chaos-ism,” is spontaneous. White said his creative process involves the act of painting into the dance of creating the work. When he begins the piece, he doesn’t have a preconceived notion of what the finished piece has to look like. He called the process “act and react.”

“I’ll start with a blank canvas, having no idea what the finished piece is going to be, but I’ll put some paint down, I’ll move it around, maybe with my hand or a brush, or maybe I’ll just get it really wet… and then I look at that reaction, of how the paint reacted with the canvas and the colors, and then I’ll look for things to draw out of that,” White said.

Chaos and accidents are involved, he added. In fact, all four new pieces started as live art before his students at TJC as a demonstration. He would begin the process, walk away from it to let layers dry, and return to the piece. He said this was different from the rest of his art, as he usually doesn’t walk away from his artwork to let it dry.

The experienced artist and art department chair has artwork across East Texas, including in the Tyler Museum of Art and the Longview and the Longview Museum of Fine Arts. He called the process of his artwork therapy and an easier way to get through life.

“Creativity in a human existence is important. One of the things I try to instill in my students is, ‘You’re the only you that exists on the planet. You’re not your brother or sister, you’re not your mom or dad, you’re not your kids, you’re not your cousin or boyfriend, you’re you. No one else is you but you.’ If you don’t express what it is to be you and share your worldview and your essence with the rest of us, there’s no way we can really know.

“It doesn’t have to be a pursuit of fine arts, you can do it with cooking, you can do it with the way you manicure your lawn. You can do it with the expression of the car you drive or the bumper sticker you put on it or the clothes you wear. I encourage people to have some creative activity, no matter what you major in or what their life pursuit is. It can be as simple as getting an aquarium and picking out the color of fish and the rocks,” White said.

Singing in the shower or writing a poem are ways of creating something, and White said that is the philosophy he believes in. In a pandemic world, White said painting, for him, is the way he processes thoughts and emotions.

“I can’t even imagine how much of a mess I would be if I didn’t have painting as a release valve,” he said.

In his early interest in art, White said in efforts to tie art into a paycheck to make a living, he went into advertising art. He called his interest in advertising art “miserable” and said it was a wake up call and ultimately, taught him perseverance. He switched to major in fine arts and learned what it truly was to express himself and leave the fear-based mentality behind.

White began his collegiate career at Cedar Valley Community College and eventually received his bachelor’s degree from the University of North Texas-Denton in 1992 and his master’s in 1996. He emphasized that community college got him through university and was essential in the foundation to get his education.

At community college, White was heavily inspired by professors who, to this day, he tries to emulate in his teaching career. It was there he got the encouragement and confidence to go into visual arts.

Randy Brodnax, Robert Jessup and Vince Falsetta are the main inspirations White met throughout his educational journey at CVCC and UNT.

“Encouraging students to find out who they are and discover their own voice and personality, that’s what I try to do with my students. A lot of people have an interest in art and want to pursue it, they just need to be given the permission to do so. A lot of what I do in my job as a professor at TJC is just allow students, give them permission and encouragement as a cheerleader, to say ‘you can explore this. You can express yourself however you choose to express yourself,’” White said.

White said he’s excited about his exhibit and said Tyler is growing opportunities to showcase art in the community.

“There’s an art movement here in Tyler that there hasn’t been in the last 20 years. It’s really built some momentum in the last few years. I’m sure, like everything, it took a hit due to the pandemic, but it’s coming back with some great momentum. There’s a lot of talented people here and I’m just proud and honored to be involved and be a part of it,” White said.