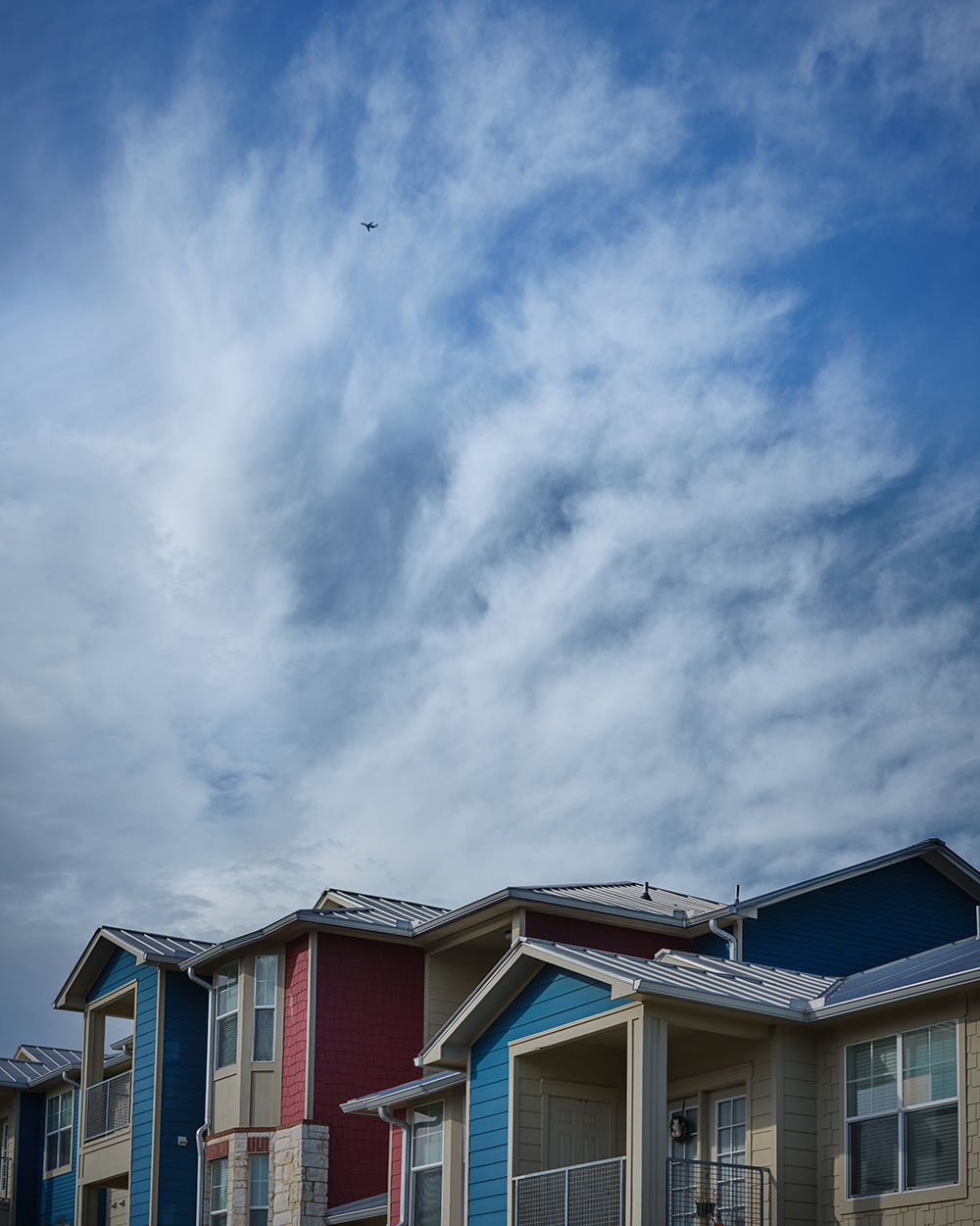 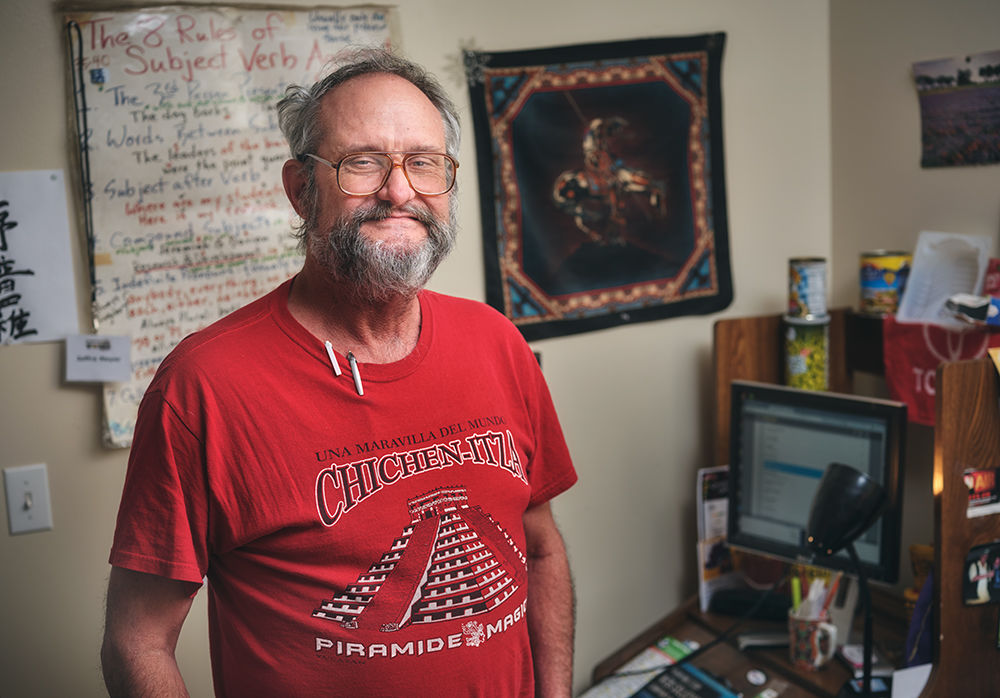 in Tyler. He has lived there since February 2018. With assistance from a housing voucher, he pays $135 a month for a one bedroom with a balcony, dishwasher and ceiling fan.

in Tyler. He has lived there since February 2018. With assistance from a housing voucher, he pays $135 a month for a one bedroom with a balcony, dishwasher and ceiling fan.

On a September morning, Chris Morgan showed up to Tyler City Hall to address the City Council.

Morgan wore a military-style hat, a button-down shirt and shorts. Glasses hung around his neck, and his gray beard covered his face.

He recounted ways in which he’d tried to get into stable housing, including an attempt to receive vouchers for monthly rent assistance through the city that is funded by the U.S. Department of Housing and Urban Development, or HUD.

“You know, I called your family Neighborhood Services (Department),” Morgan told his local elected representatives. “You know what they told me about HUD projects? ‘We don’t take applications. We got too many.’

Two weeks earlier, at a luncheon at Willow Brook Country Club, an economist told a crowd of government officials and real estate developers to mind the gap between local incomes and the cost of homes they build.

“Our incomes are lower in Texas than the national levels,” economist James Gaines said. “House prices relative to those incomes is getting higher, and the further that spread gets … then the more and more (important) the affordability issue becomes.”

Finding affordable, safe and sanitary housing is a struggle for many in Tyler and Smith County. The issue affects people across income brackets, but is hardest for people with the lowest incomes. There are some success stories for making it through the struggle, but they don’t often involve going it alone.

“We ended up purchasing a home because we were staying in an apartment and our rent just kept going up,” said Tasha Henderson, 33, a transportation professional who is originally from College Station. “It was like to the point where we’re paying a mortgage.”

Henderson said it was hard to pay about $800 a month in rent on a two-bedroom apartment, and she experienced several car burglaries at the complex. But she notes that she has it easier than many because she is able to share expenses with her husband, who also has an income.

J.D. Meyer, who suffers from chronic obstructive pulmonary disease, has lived in housing subsidized through the U.S. Department of Housing and Urban Development for many years. He prefers to be somewhere near the hospital in case his health acts up.

He has lived in the Park at Shiloh since February 2018. With assistance from a housing voucher, he pays $135 a month for a one bedroom with a balcony, dishwasher and ceiling fan. That’s less than he paid at another complex he described as “far rattier,” where mold and German roaches impacted his lung disease.

Greg Grubb, the executive director of the poverty organization PATH, said even though there are a lot of real-estate developers in Tyler, not many of them are interested in building housing aimed at lower-income renters. He estimated that there are three or four in Tyler, and they do it more out of a sense of duty than a desire for profit.

“The problem didn’t come up overnight, and isn’t going to be solved overnight,” Grubb said. “I’m hopeful we’re still of the size that we can make some headway here — increase affordable housing stock but also increase the capacity of our families to afford what our market rates are.”

What is affordable housing?

Most experts say your rent and utilities shouldn’t eat up more than 30 percent of your household income each month. That’s how the U.S Department of Housing and Urban Development, or HUD, defines “affordable.”

In many cities and towns across the country, there is a shortage of safe, quality housing priced within reach for lower- and middle-income residents. The term “affordable housing” often refers to programs and incentives aimed at fixing that. For example, many U.S. cities directly own real estate offered at lower rental prices to very low-income people. (Tyler isn’t one of them.) The federal government also funds a national voucher program to help some people afford their monthly rent.

You can use our chart online to estimate how much you or your family should be budgeting per month for rent and utilities.

Who needs affordable housing in Tyler?

Tylerites in need of affordable housing come from all walks of life, including retirees, people with disabilities, people who work at local businesses, and people struggling through crises like medical debt and job loss.

It’s important to understand that many people working full-time jobs in Tyler cannot afford the median gross rent in Smith County of $873 a month, according to the U.S. Census Bureau. The number includes paying for the home plus utilities and fuels. To afford that much in rent, you’d have to make $34,920 a year. The minimum wage for a groundskeeper in the city of Tyler’s Parks and Recreation Department is $12 an hour, or under $25,000 a year for full-time work. Many classroom aides working for the Tyler Independent School District made under $15,000 in 2018.

Some people qualify for additional income sources, like Social Security or disability, that can go toward housing costs. The average Social Security retirement benefit in 2019 comes to about $18,000 per year, and the individual Supplemental Security Income allowance for people who are blind, aged or disabled is about $9,000 per year.

Is there a lot of need for affordable housing in Tyler?

The U.S. Census Bureau reports that, in 2018, there were about 21,000 people living in poverty in Tyler, or nearly 20 percent of the city’s total population, and nearly 36,000 living in poverty in Smith County. The Census Bureau defines poverty by using money income thresholds that vary by family size and composition. For example, the income threshold for a one-person household with an adult under age 65 is $13,064 per year. The income threshold for a four-person household with two children under 18 is $25,465.

In 2018 as well, an annual survey counted 334 homeless residents in Tyler, including 78 children. Many low-income Smith County residents would need to work overtime (twice as many hours as their regular jobs, in some cases), hold multiple jobs, share rental expenses with other families, or receive some kind of assistance in order to afford rent in the traditional real-estate market.

For example, if you’re part of the 3 percent of Texans getting paid $7.25 per hour minimum wage or below, it would take you 79 hours of work per week to afford a studio or one-bedroom apartment at fair-market rent in Smith County, according to a 2019 national study. You would have to work 96 hours to rent a typical two-bedroom apartment.

The National Low Income Housing Coalition reports that there is a shortage of affordable homes across the country. Extremely low-income households — defined in the Tyler area as one person making $21,270 a year — face the largest shortage. They make up around 15 percent of the area’s population.

Do our city and county governments provide affordable housing?

Neither the city of Tyler nor the Smith County government owns or controls real estate that is rented out directly to residents who need affordable housing. The city’s primary method of providing affordable housing is through federally funded Housing Choice Vouchers (formerly known as Section 8).

Nationwide, Housing Choice Vouchers are the primary way that the federal government helps supply affordable housing to low-income people. Those who qualify for the voucher are responsible for finding a landlord who will participate in the program.

There were about three dozen homes listed on the website GoSection8.com this month, although those could be from fewer landlords, and that list isn’t necessarily comprehensive.

Money from the voucher is paid directly to the landlord. If the voucher does not cover the full cost of the rental unit, the renter pays the difference. In some cases, vouchers can be used to purchase homes.

The City of Tyler’s Neighborhood Services Department manages these vouchers for residents countywide. They are available to people in and around Smith County, including in unincorporated areas and other cities, such as Lindale.

Currently, there are about 1,000 vouchers in use through the City of Tyler’s Neighborhood Services Department, according to Prentice Butler, the program’s local housing manager. That number has held steady over the past several years.

There is often a very long waitlist of people applying for Housing Choice Vouchers in Smith County, and the county adds new people to the list only every few years. In 2014, that list was around 500 people. Last month, Butler said that the waitlist is now down to zero. He said Neighborhood Services staffers went through the list, person by person, to determine eligibility and other circumstances.

The waitlist will open up again sometime before Jan. 1, 2020, according to Butler.

Not all landlords accept Housing Choice Vouchers, and in Texas, they don’t have to.

While many states and cities have passed laws requiring landlords to accept the vouchers, saying it would be discriminatory not to, Gov. Greg Abbott signed a law in 2015 banning Texas cities from passing those types of laws.

The 2015 Texas law includes an exception that protects veterans; landlords must accept renters who have Veterans Affairs Supportive Housing Vouchers.

What other kinds of affordable housing exist in Tyler?

Six “multifamily” apartment complexes in Tyler charge residents no more than 30 percent of their monthly household income for rent and utilities, according to the U.S. Department of Housing and Urban Development.

There also are 12 housing complexes in Smith County that benefit from a federal program called the Low-Income Housing Tax Credit. This program encourages private investors and real estate developers to build affordable housing by paying for some of the costs.

In return for the tax credits, these units must charge rent that is affordable for a family making the local median income, and there are algorithms for how to calculate the appropriate rent based on how many people should ideally live in the apartment.

Are the multifamily properties safe to live in?

HUD inspects housing units on a regular basis. The most recent information available shows all six multifamily housing complexes in Tyler passed inspections between 2015 and 2017, according to a database provided by the investigative reporting center ProPublica.

To pass the inspections, the complexes must demonstrate to HUD that they are decent, safe and sanitary places to live, according to ProPublica. The scores range from 0 to 100, like grades in school, and 60 is passing.

How do you find affordable housing in Tyler?

The city of Tyler’s Neighborhood Services Department, at 900 West Gentry Parkway, is the public agency for housing in Smith County. The department plans to reopen its waiting list for Housing Choice Vouchers before the end of the year.

HUD offers a resource locator at https://resources.hud.gov, where people can find the addresses and phone numbers for HUD-designated multifamily housing and tax-credit-funded units. However, there are not always vacancies.

Voucher-holders can search GoSection8.com to find suitable units in their desired city that will accept their vouchers. Landlords seeking to participate in the program can sign up to list their affordable rentals.

The East Texas Human Needs Network offers a website, 903help.org, that lists community resources across the region. This has helpful information for not just housing but many different needs, such as health insurance, addiction treatment and employment assistance.

PATH, which stands for People Attempting to Help, offers transitional housing but not permanent housing, and can help people afford prescriptions, get their teeth cleaned, and obtain healthy food, among other services.