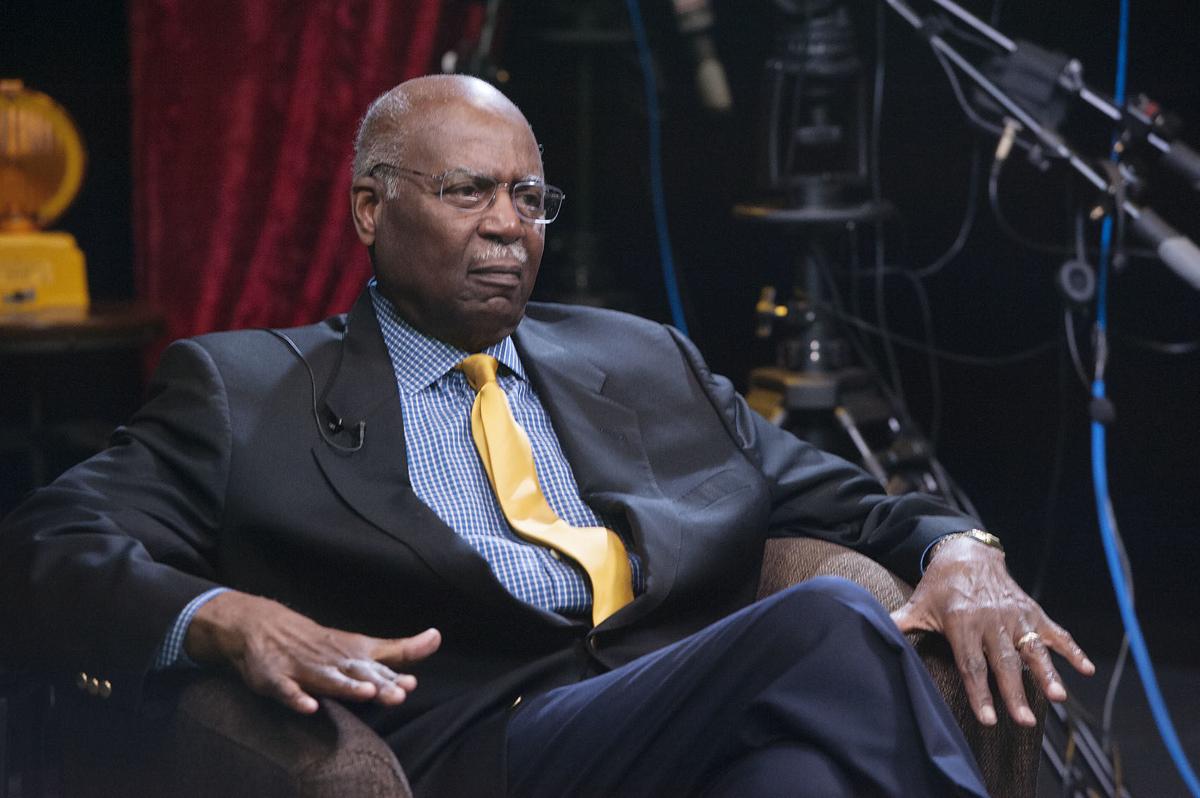 Dr. Samuel Houston is interviewed on video for the city of Tyler’s Black History Month production on Feb. 1, 2018. 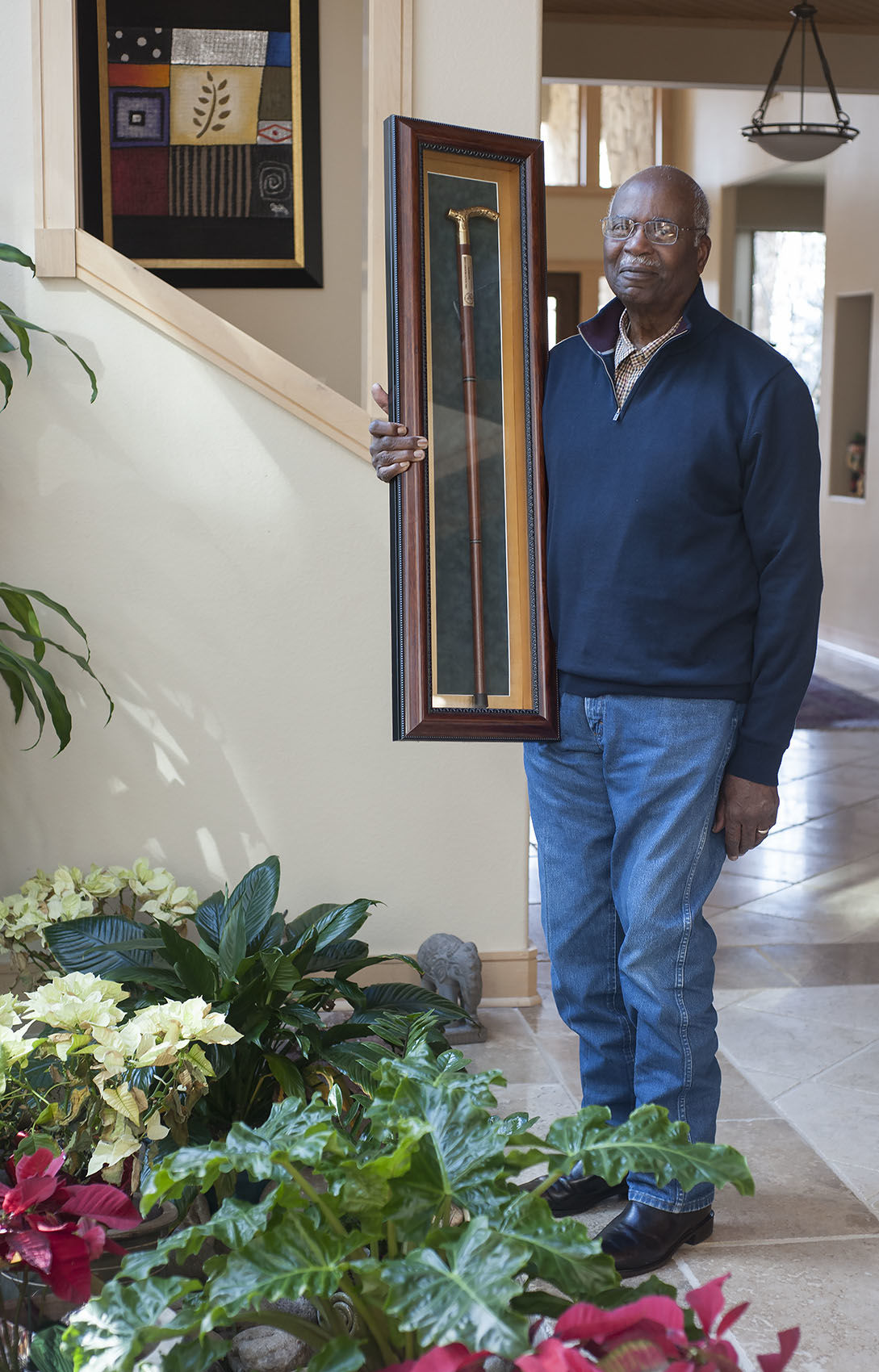 Dr. Samuel Houston, 81, is pictured at his home in 2018 with his 1994 Gold-Headed Cane award from the Smith County Medical Society. Dr. Houston worked as a surgeon at East Texas Medical Center. 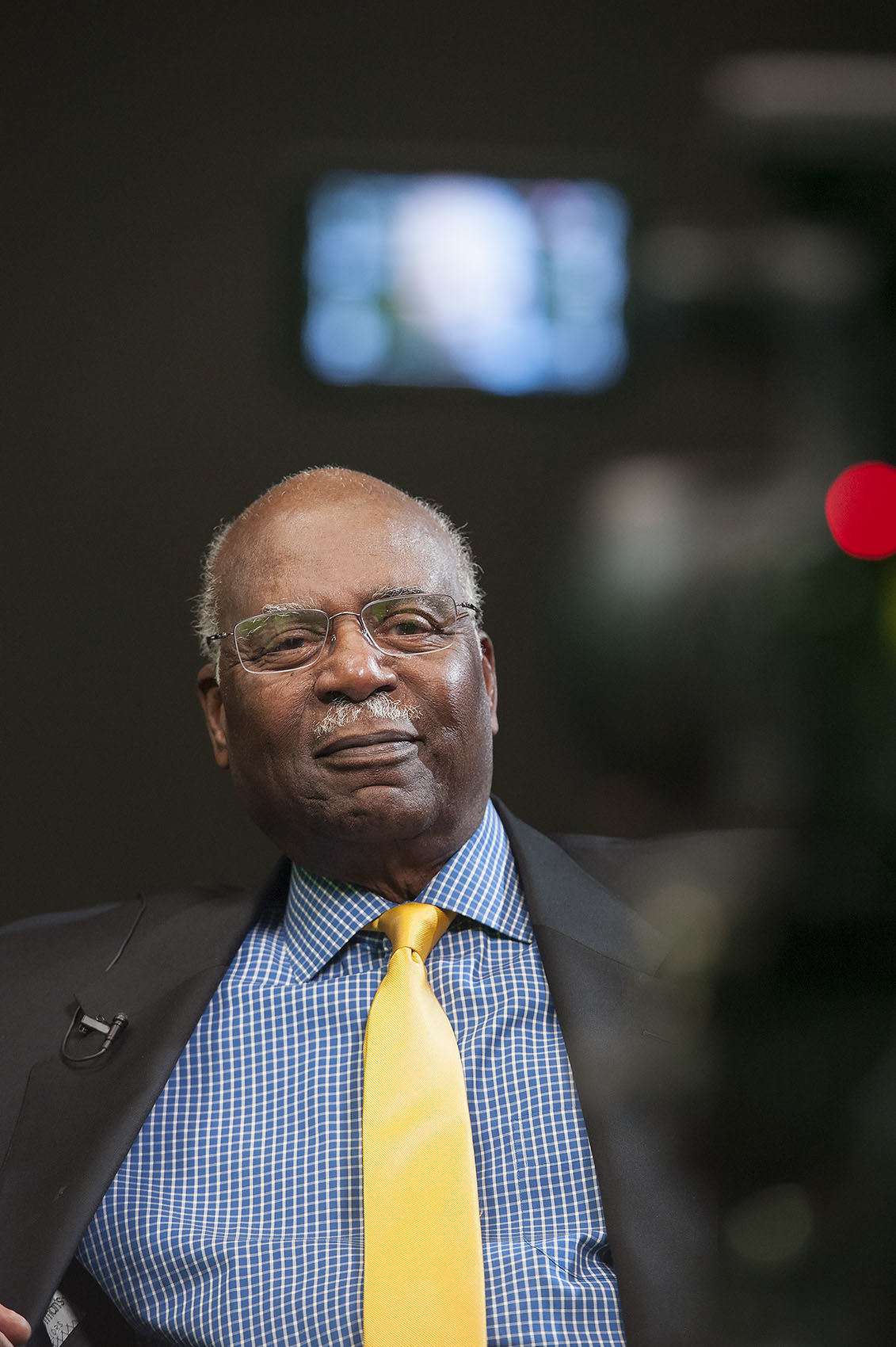 Dr. Samuel Houston is interviewed on video for the City of Tyler’s Black History Month production on Feb. 1, 2018. 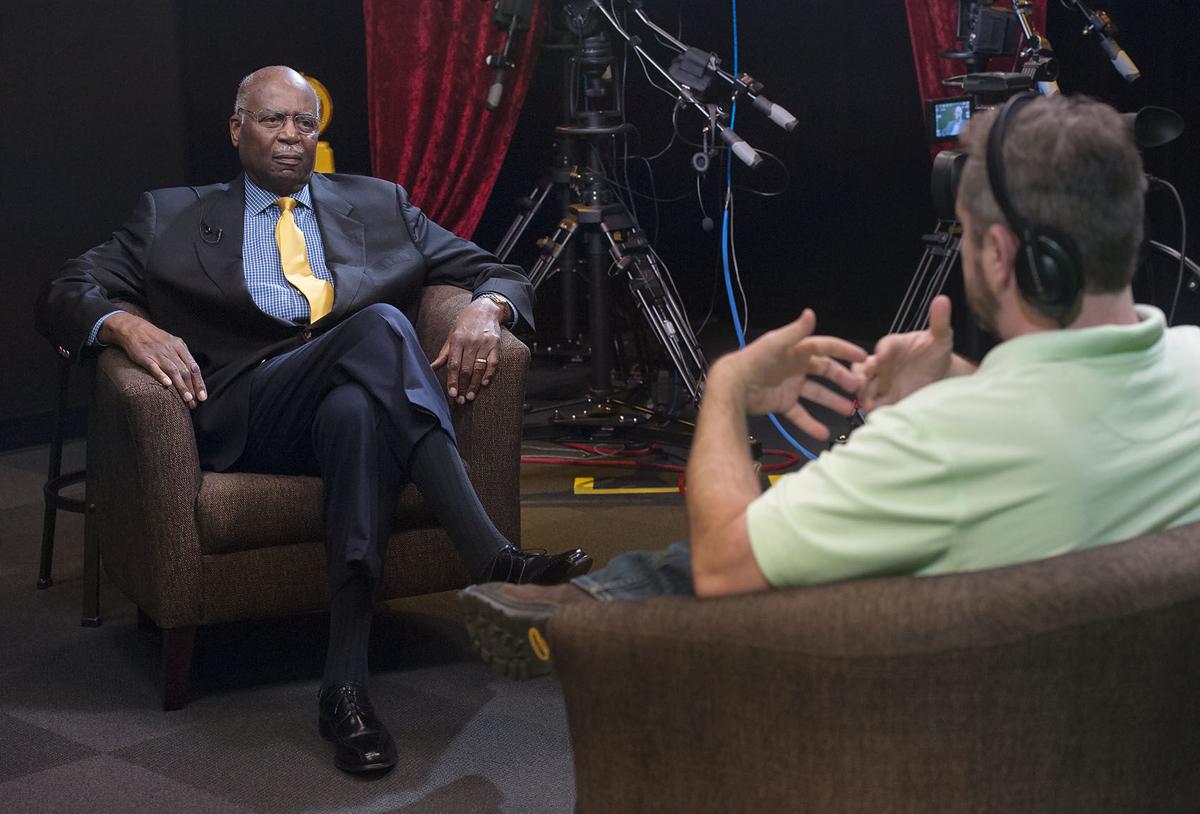 Dr. Samuel Houston is interviewed on video by multimedia specialist Bob Mauldin for the City of Tyler’s Black History Month production on Feb. 1, 2018.

Dr. Samuel Houston is interviewed on video for the city of Tyler’s Black History Month production on Feb. 1, 2018.

Dr. Samuel Houston, 81, is pictured at his home in 2018 with his 1994 Gold-Headed Cane award from the Smith County Medical Society. Dr. Houston worked as a surgeon at East Texas Medical Center.

Dr. Samuel Houston is interviewed on video for the City of Tyler’s Black History Month production on Feb. 1, 2018.

Dr. Samuel Houston is interviewed on video by multimedia specialist Bob Mauldin for the City of Tyler’s Black History Month production on Feb. 1, 2018.

Samuel DeLoyd Houston grew up in Tyler when segregation was commonplace in the South. Growing up in north Tyler, he never let the injustices associated with racial discrimination block his determination to strive for excellence in every arena of life.

Family members, neighbors, as well as fellow doctors and surgeons, convened at College Hill Baptist Church on Monday to celebrate the life and legacy of Houston, who practiced general surgery for 29 years at Mother Frances Hospital and East Texas Medical Center. He served as chairman of the Department of Surgery at ETMC from 1993 to 1995.

Bishop David R. Houston, of the Texas Northeast Second Ecclesiastical Jurisdiction of the Church of God in Christ, officiated the memorial service for his cousin, Dr. Houston.

“Our grandfathers were brothers. We were both born at the end of the Great Depression,” Bishop Houston said. “I am one month older than Sam. We grew up together, three blocks from each other.

According to many who were known as “colored” during the 1950s and lived in Tyler, children were aware of the segregation, but they were challenged to “rise above” the obstacles and achieve greatness no matter what.

In attendance at the memorial was Rev. Larry Wade, who, as a boy, lived next door to Dr. Houston and his parents.

“His mother was a teacher, and so was mine. They instilled pride in us. They always encouraged us to grow up and be somebody and be successful,” Wade said. “We grew up in an atmosphere where parents looked out for all of the children in the neighborhood. Dr. Houston is an example of what happens when the village works together to help our children succeed.”

Dr. Houston knew that he had prepared himself to stand and flourish in life as a qualified surgeon. After graduating from medical school, he became a flight surgeon in the U.S. Army, serving at Ft. Hood and in the Vietnam War.

With the love of his life, Dr. Edna Houston by his side, Dr. Houston returned to Tyler in 1971 and opened his own practice in the heart of the medical district. His wife was a thriving and successful anesthesiologist in Tyler, sometimes working in the same operating room.

“When Sam arrived in Tyler as a surgeon, I told him, ‘I promise you, you will be accepted.’ He was fully accepted by other surgeons,” Dr. Joseph Prud’homme, a longtime general surgeon in Tyler.

Sharing humorous experiences he enjoyed with his surgery colleague that caused the audience to chuckle, Prud’homme treasured the special relationship he had with Dr. Houston.

“Sam was a dear friend and he was very much respected,” Dr. Prud’homme said. “He was never an abusive surgeon in the operating room. Scrub nurses and other workers appreciated working in his operation room.”

A longtime member of the board of trustees of Tyler Junior College, Prud’homme said he appreciated giving back to the community along with Dr. Houston, who was elected to the board in 1992.

“One thing I learned from Sam is that you do not need to speak loud to be heard,” Dr. Prud’homme said, as he took his seat.

Dr. Carl Westbrook, the first Black obstetrician-gynecologist in Tyler, said he knew Dr. Houston as a mentor, colleague and friend over a period of 43 years.

“Sam was a well-trained, experienced surgeon who chose to return to Tyler. He knew the legacy of Smith County and how colored people and poor whites were marginalized with delayed care,” Westbrook said. “It did not deter him.”

Westbrook said that Dr. Houston worked to create an “alliance,” which became a network that allowed patients to afford health care.

At the height of his career as a surgeon, Dr. Houston was awarded the Gold-Headed Cane, which honors a physician who symbolizes the pursuit of the highest standards of scientific excellence and integrity.

Dr. Houston worked with pioneering doctors in Tyler, such as Dr. Theodore J. Taliaferro, who arrived in Tyler in 1939 to work with Black patients, and also Dr. James M. Hilliard and Dr. Martin L. Edwards, Jr., who worked for many years as a physician in Tyler, and was elected as the first Black person to serve on the Tyler ISD board of trustees.

“Those doctors respected him, his expertise and professionalism,” Westbrook said. “They referred patients to him very easily.”

Another neighbor, Janelle Merritt, spoke kindly about how Drs. Samuel and Edna Houston responded when they realized they had moved next door to a couple with a house full of young children.

“My husband, Brad, and I told our kids to tone it down. Once Sam and Edna learned that we were telling the kids to keep the noise down, they told us to not do that,” Merritt said. “They wanted the children to act naturally like children would.”

Dr. Houston had a regular habit of patting each child’s hand when he saw them, she said.

“They became like grandparents to our kids,” Merritt said. “They never complained about our kids and said they were always available if needed. They actually saved us from going to the ER a couple of times.”

Representing the family, Dr. Houston’s only daughter, Cheryl Houston, said her father never wanted to be “fussed over,” during his lifetime, but he would have appreciated all of the nice things that had been expressed during the memorial celebration.

She emphasized how she and her two brothers, Stuart and Michael, were blessed to have a father who loved being with his family and who spent quality time with his children.

“He was a very patient teacher. He taught us to make homemade kites from paper bags and twigs,” Cheryl Houston said. “It was amazing to see those homemade kites soar across the blue sky with the perfect breeze.”

Married for 59 years, Drs. Samuel and Edna Houston shared a love for medicine, family and community. Their three children are all successful professionals. Stuart D. Houston, the firstborn, specializes in IT (Information Technology), Michael S. Houston is a medical doctor and Cheryl Houston is a physician assistant.

Following his retirement from general surgery, Dr. Houston donated his time as a medical provider at Bethesda Health Clinic in Tyler and the ETMC Wound Care Clinic. He was an active member of several Emmett J. Scott All-School Reunion steering committees throughout the years and served on the advisory board for the University of Texas at Tyler.

More than anyone else, Dr. Edna Houston knew her husband best and will miss him most.

“I married my friend. We were always friends,” she said. “We had the same hopes and perspectives about what marriage should be. Children were the focus of everything we did and everything we hoped for.”

What Edna Houston appreciated most about her husband is also what she will miss the most.

“I appreciated his intellect and wisdom,” she said. “He would always give you sound judgment. I loved how he directed the children, and of course, his friendship.”

His wife and partner in life believes her husband’s special qualities stood the test of time.

“He was a gentleman who possessed integrity and honesty,” Edna Houston said.

Qualities that lasted a lifetime.

Quantalane R. Henry is a professional journalist, longtime educator, motivational speaker and evangelist. Her most recent published article in the Tyler Morning Telegraph was “Uniting the Country Requires Hard Work, But It Can Be Done,” on Feb. 2, 2021. She can be reached at henryquantalane@gmail.com.