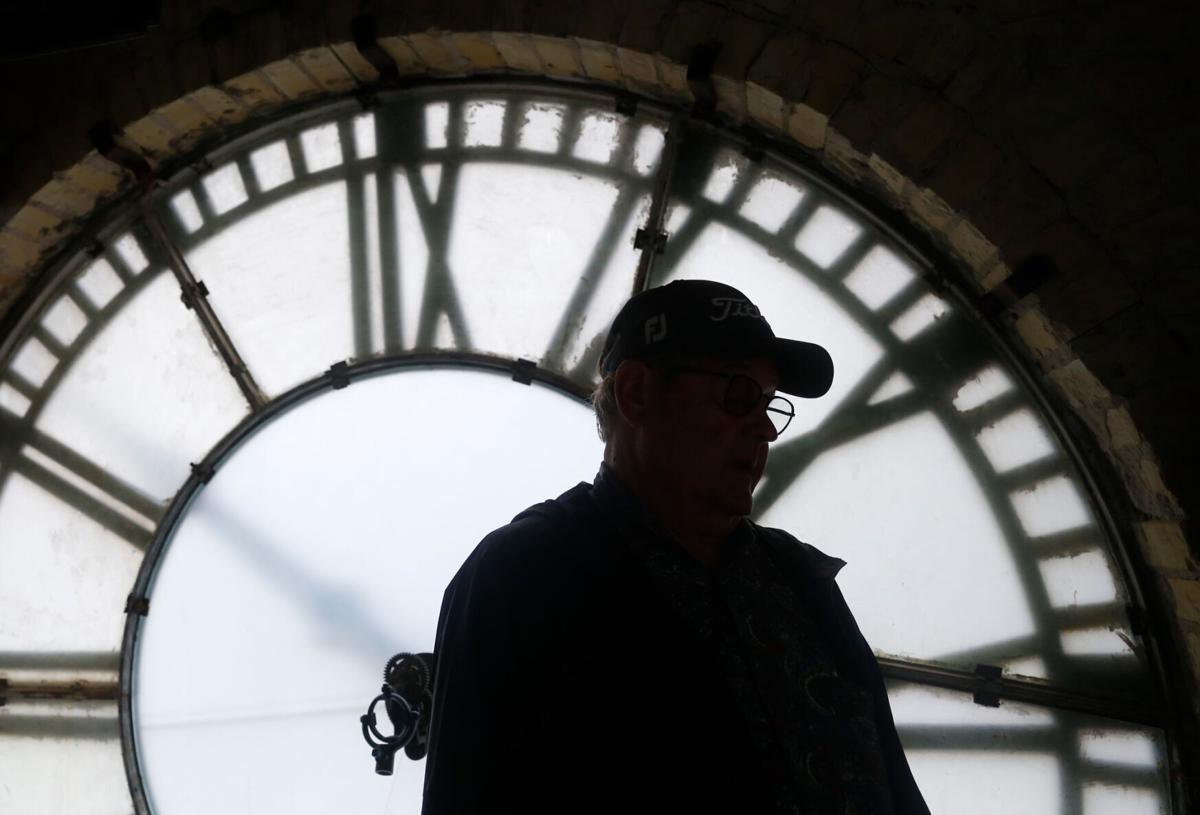 James Steffek is silhouetted against one of the clock dials inside of the tower. 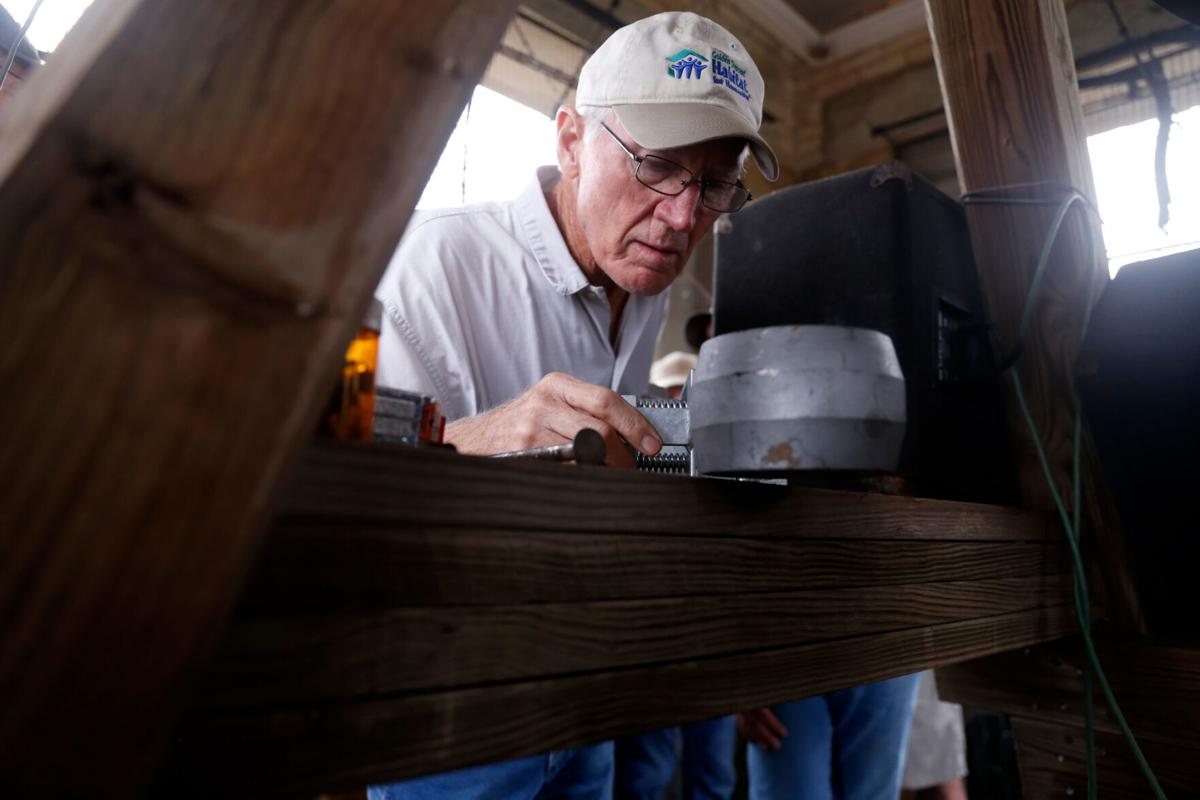 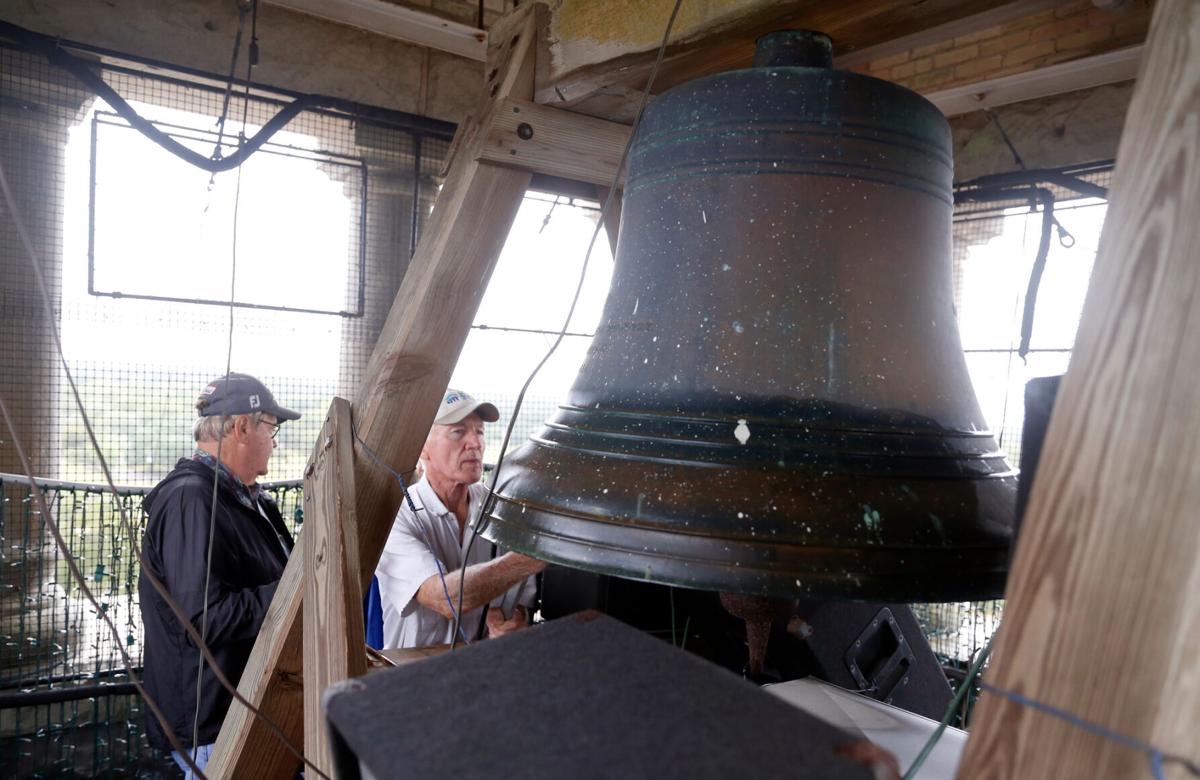 Clyde Svetlik inspects the bell on top of the clock tower. 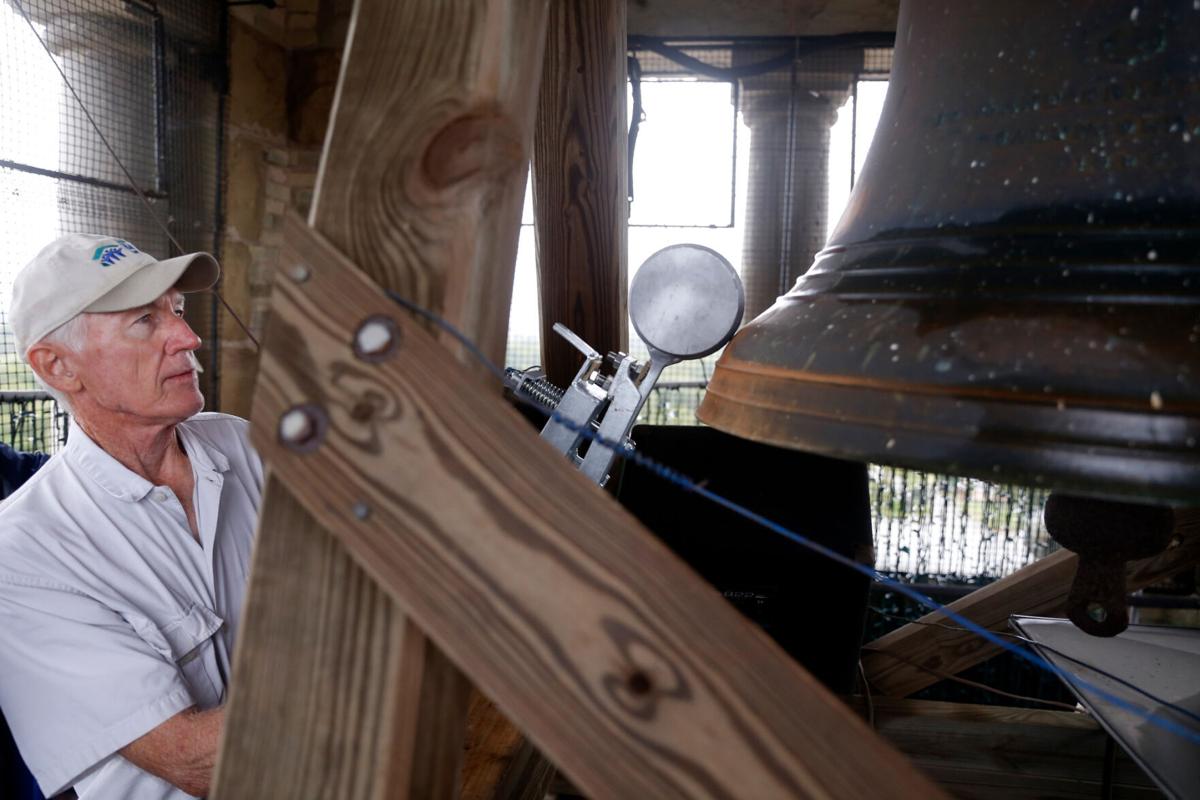 Clyde Svetlik tests the new hammer against the bell inside the Lavaca County Courthouse in Hallettsville. 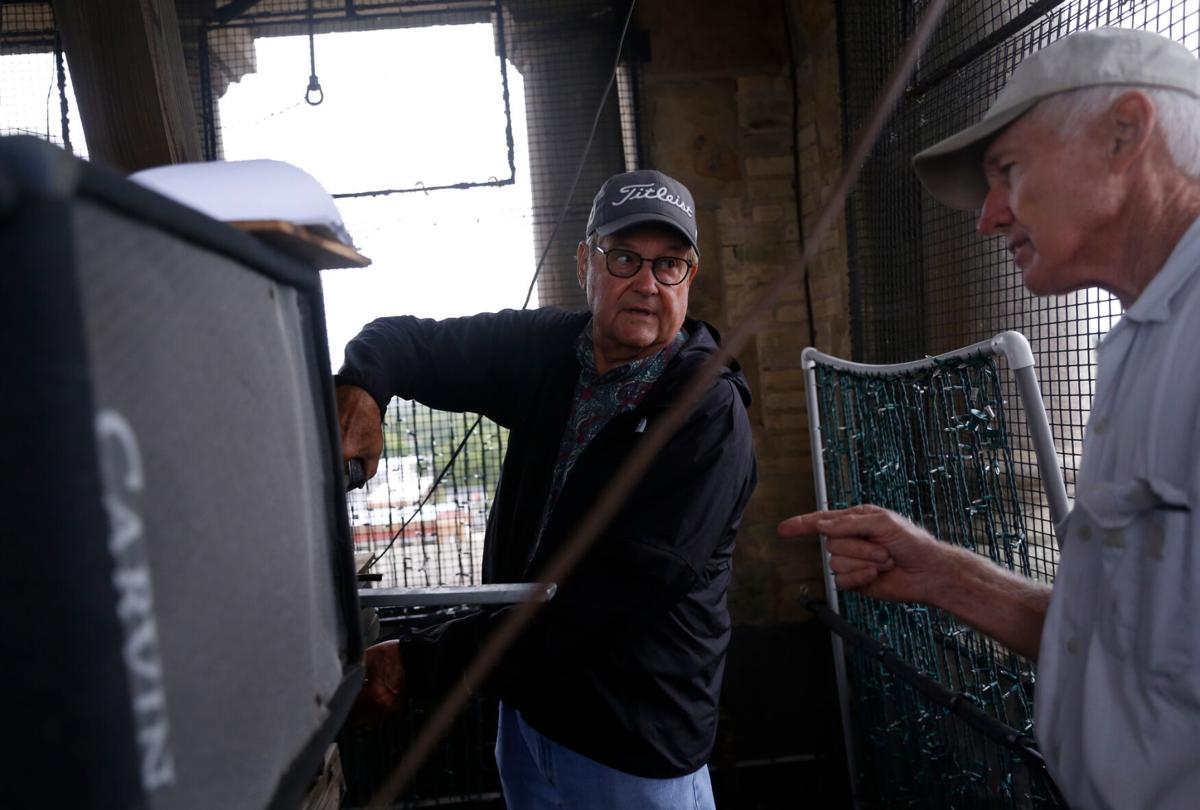 James Steffek, left, talks with Clyde Svetlik about the logistics of installing a new hammer for the bell inside of the clock tower. 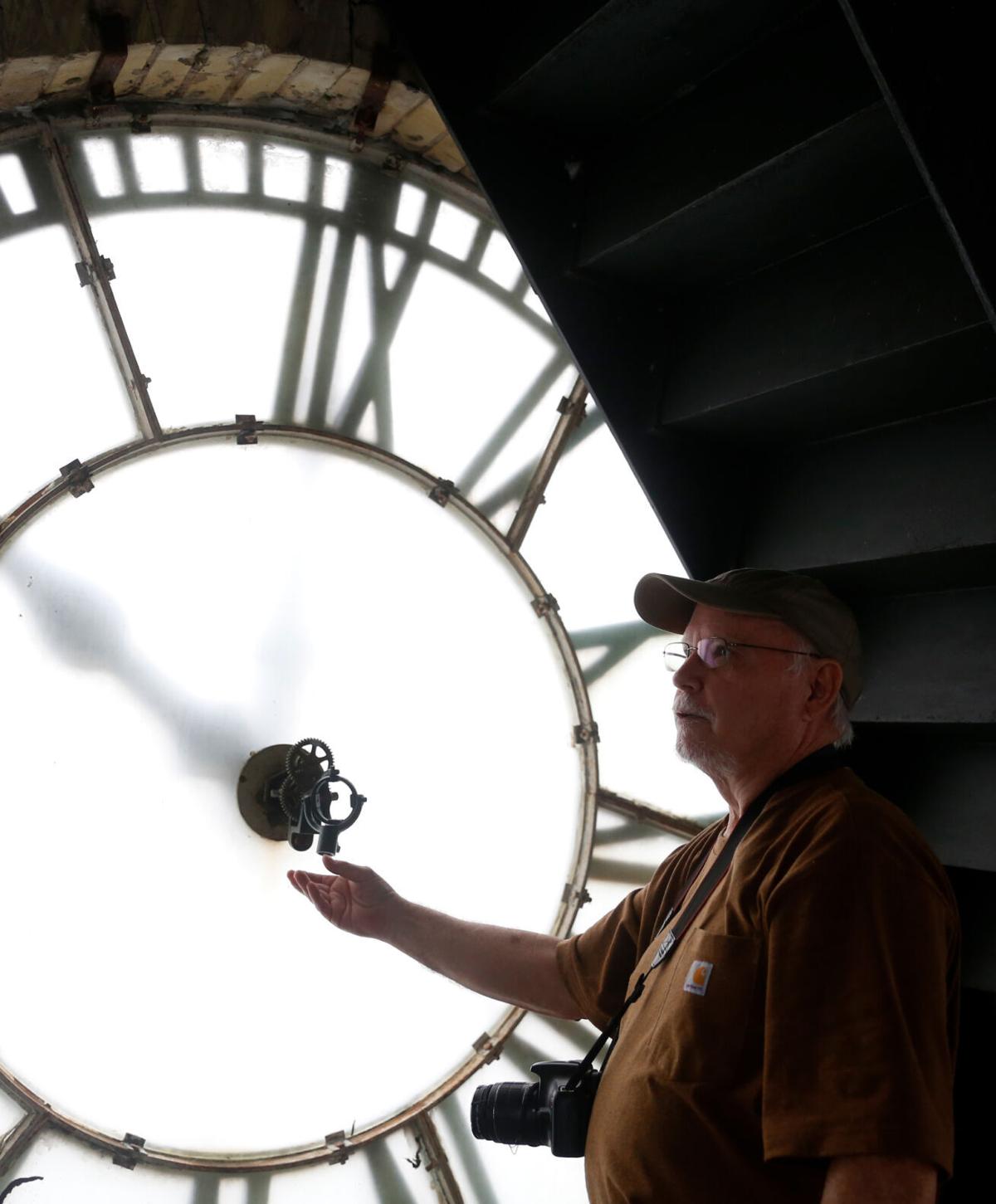 Doug Kubicek inspects a gear on one of the clock faces in the clock tower. 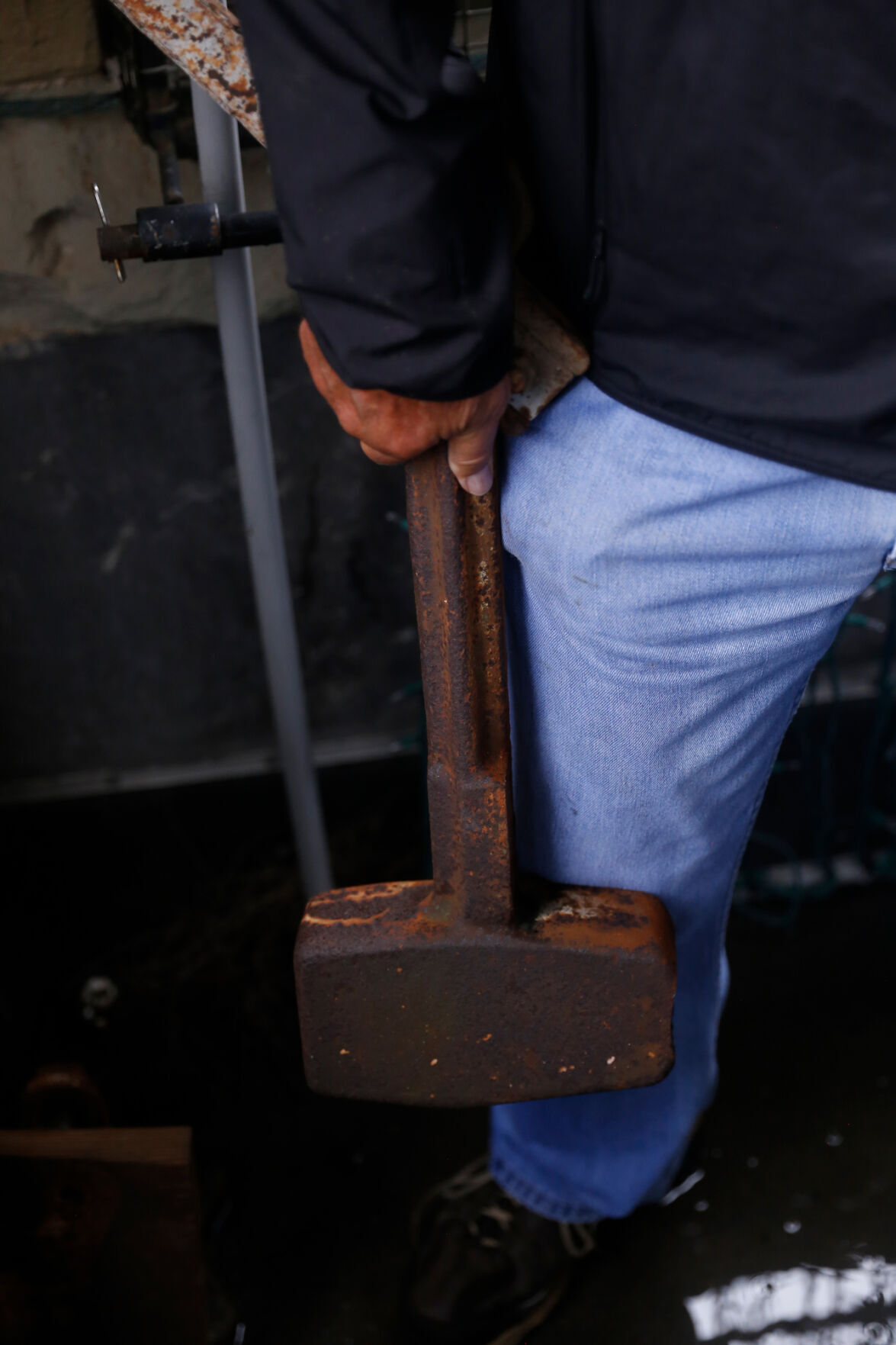 James Steffek holds the old hammer belonging to the bell. 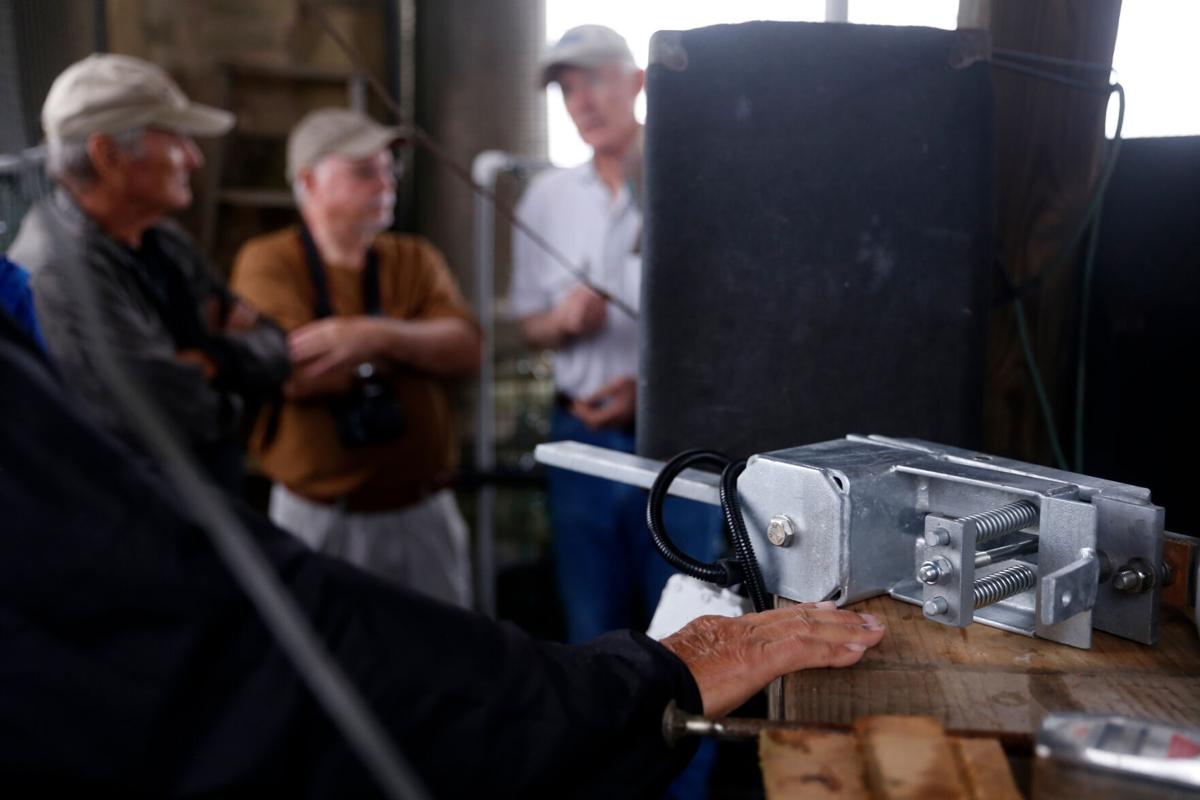 The new hammer sits near the bell.

James Steffek is silhouetted against one of the clock dials inside of the tower.

Clyde Svetlik inspects the bell on top of the clock tower.

Clyde Svetlik tests the new hammer against the bell inside the Lavaca County Courthouse in Hallettsville.

James Steffek, left, talks with Clyde Svetlik about the logistics of installing a new hammer for the bell inside of the clock tower.

Doug Kubicek inspects a gear on one of the clock faces in the clock tower.

James Steffek holds the old hammer belonging to the bell.

The new hammer sits near the bell.

HALLETTSVILLE — This spring, James Steffek was having a cup of coffee at a local bakery when he ran into County Judge Mark Myers, who mentioned that the clock tower in the county’s 122-year-old courthouse was not working properly.

County officials had been working to restore the old clock tower, which had been out of commission for about four years, in time for the county’s 175th anniversary celebration in early April, but the industrial motor they’d installed was not up to the job.

“It was running very fast, in fact. It had the correct time right every 48 hours,” Myers said. “I was disappointed. We didn’t have a lot of money in it, but I thought we’d found a deal.”

After talking with Myers, Steffek, who has a decades-long background in engineering and electrical manufacturing, agreed to take a look. He soon assembled a team of a half-dozen volunteers who spent more than four months trying to restore the clock tower to its former glory.

“These folks are all local community folks that have been in industry all their lives — very knowledgeable people,” Steffek said up in the clock tower on a misty October morning. “We’re basically upgrading the system with something that will last the next 100 years.”

Repairing the clock tower, which still holds the original bell, manufactured at a Baltimore foundry in 1899, required all the ingenuity the team could muster. The volunteers had to overcome a number of obstacles, including waiting on couplings that were lost by FedEx en route from Belgium and gaining approval for the whole project from the Texas Historical Commission.

“It has been a real blessing to have these guys on board,” Myers said.

Now that the couplings have finally arrived, the clock tower could be restored to working order as soon as this week, though Myers said county officials are considering waiting to unveil the clock until the Festival of Lights in November.

Aside from the old bell, the gears, the round, translucent clock faces with cast-iron roman numerals around the perimeter, which are all original, much of the clock tower’s inner workings are barely recognizable from when the courthouse was built in 1899.

Originally, the courthouse’s clock and bell were powered by two sets of weights, which required a volunteer to manually crank them up at least once a week.

Sometime around the 1940s, that pendulum system was replaced by an electrical motor that powered the gear system for the clock hands and made the bell toll, said Doug Kubicek, a local historian and former teacher who has been heavily involved in the project. That motor powered the clock tower until recently, but it eventually gave out, requiring frequent repairs in its last decade of operation.

By the time the clock stopped working for good, it was nearly impossible to find the parts needed to get the motor and gear box working again.

“We couldn’t readily find anyone to rebuild the parts,” Steffek said. “We couldn’t find a new gear box of that type. So we embarked on looking at a way to go with a different system to upgrade the clock that would require a lot less maintenance and keep good time.”

After considering their options, the volunteers placed their faith in a step motor roughly the size of a toaster oven that now sits in the attic, just feet away from two of its much larger predecessors.

The new motor sends a pulse once a minute along the couplings to the gears at each clock face in order to turn the minute and hour hands and operate the bell. The motor is calibrated by a computer chip, which sets the time and adjusts the time forward and backward when daylight saving time begins and ends.

“It’s really going to take it into the 21st century,” Kubicek said. “It doesn’t require but once a month to go up and look at it.”

Acquiring all the parts for the new clock system involved some headaches. Transportation delays set the volunteers back several times, Steffek said. Making matters worse, FedEx lost a set of couplings while they were en route from Belgium to Missouri.

But the old bell, despite having sustained a small crack, still rings like it used to.

Growing up in Shiner, Kubicek grew accustomed to hearing the noontime whistle blow at Spoetzl Brewery, a daily occurrence that he said helped put the whole town in sync. Now, he will be able to hear the new bell at the courthouse from his current home, as will others who live and work around the downtown square in Hallettsville.

All told, the parts for the new clock and bell system cost under $10,000, Myers said, well under previous estimates. With all of the labor done by volunteers, costs were kept low — and Steffek said he even had to turn away others who wanted to lend a hand.

“That’s what this community is like,” he said. “If you need help with something, ask them. Chances are they’re going to pitch in.”

Mark Rosenberg reports on local, regional and breaking news for the Victoria Advocate as a Report for America corps member. He can be reached at mrosenberg@vicad.com or 361-574-1264 or on Twitter at @markrosenberg32. To support local journalism at the Advocate through Report for America, go to VictoriaAdvocate.com/report{span}.{/span}