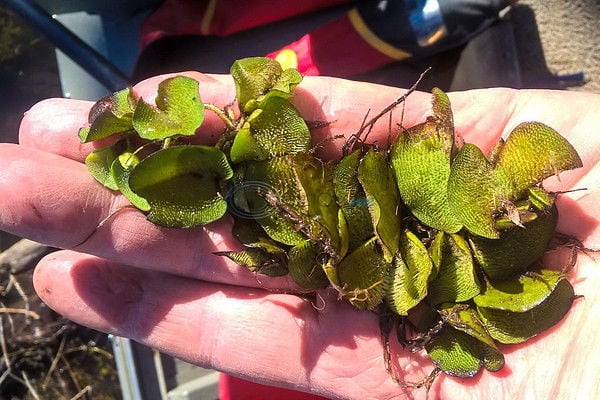 TPWD/COURTESY Texas Parks and Wildlife Department and the Sabine River Authority are treating giant salvinia found in two areas of the lake. The two agencies are also searching the lake for more of the plant. 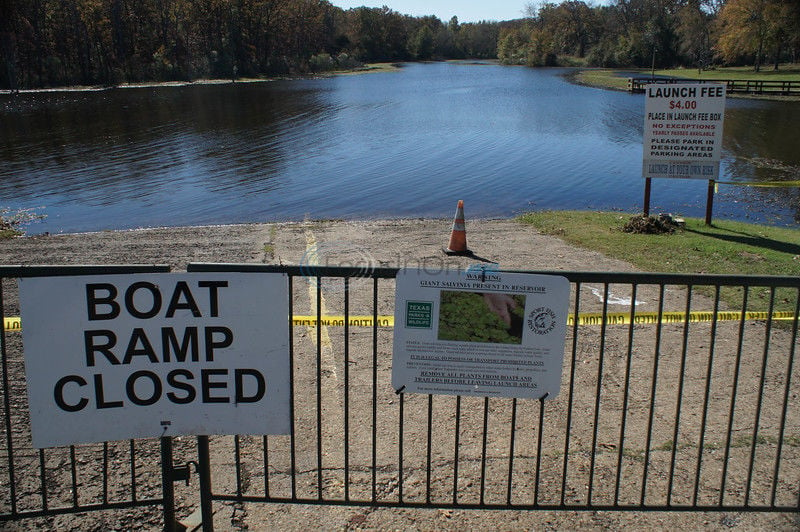 Sabine River Authority closed two ramps on Lake Fork last week after the discovery of giant salvinia in Chaney Branch and another small cove. Giant salvinia is an invasive species of vegetation that mats and reduce water oxygen levels. It grows can double in mass about every two weeks.

TPWD/COURTESY Texas Parks and Wildlife Department and the Sabine River Authority are treating giant salvinia found in two areas of the lake. The two agencies are also searching the lake for more of the plant.

Sabine River Authority closed two ramps on Lake Fork last week after the discovery of giant salvinia in Chaney Branch and another small cove. Giant salvinia is an invasive species of vegetation that mats and reduce water oxygen levels. It grows can double in mass about every two weeks.

Texas Parks and Wildlife Department continued its efforts to control an outbreak of giant salvinia on Lake Fork Tuesday by spraying the chemical herbicide glyphosate in two areas where it was discovered.

The plant, an invasive species native to Brazil, was discovered last week in Chaney Branch and another small cove by fishermen and reported to the department's Inland Fisheries division. Working in conjunction with the Sabine River Authority, the operating agency for the 25,000-acre reservoir, TPWD immediately placed a 1,100-foot boom across the mouth of Chaney Branch, and two ramps, Chaney Point and Secret Haven, were closed to prevent further spread of the plant.

Initially it is believe the plant was covering just over three acres of water. Already existing on about 20 lakes across the state, giant salvinia has the potential to double in mass every two weeks.

Officials are uncertain how the plant found its way onto Fork, but it most likely came attached to a boat or trailer that had not been cleaned after leaving another lake already infested with the plant.

Kevin Storey, TPWD Inland Fisheries district biologist, said it appears the giant salvinia has been on the lake for some time, and it is already established making control more difficult.

"Even if the boom we have succeeds in keeping it in the cove, it is one of those issues that will take years of treatment. I don't know if we are ever going to eradicate it. It has gotten a hold," Storey said.

He added that department and SRA employees have been pulling the plant out by hand prior to the spraying. Storey said he expects the spray treatment to control much of the plant, but not all because some of it is covered by other plants or impossible to get to by boat and too small to pick up by hand. Experts say it only takes two leaves and a tiny piece of stem for the plant to survive and grow.

Sabine River Authority officials say the existence of the plant on Fork should not be an issue to Dallas' pump station operations or impact water quality. The concern is that it can impact both hunting and fishing on the lake that provides an estimated $60 million economic impact to the area.

Storey said giant salvinia grows in floating mats. When it completely covers an area it can prevent sunlight from reaching the water, resulting in a lack of oxygen for other vegetation growth and fish under it.

The plant is not expected to expand into the deeper portions of the lake. While it can grow in deep water, wave action prevents the formation of large mats. In contrast, last summer giant salvinia covered approximately 2,800 acres of Caddo Lake, a much shallower lake than Fork. At its worst, the plant covered 6,000 acres on the Texas side of Caddo.

Along with chemical treatments, cold weather also helps control salvinia going into the next growth cycle. High water levels also can help flush it out of a lake.

Storey said, because the plant was established before it was found, annual surveys of the lake in search for it will become commonplace.

Anyone who locates any additional patches of giant salvinia are asked to call TPWD at 903-593-5077 or 903-570-5745. Boaters also are reminded to drain, clean and dry their boats and trailers before moving from one lake to another.