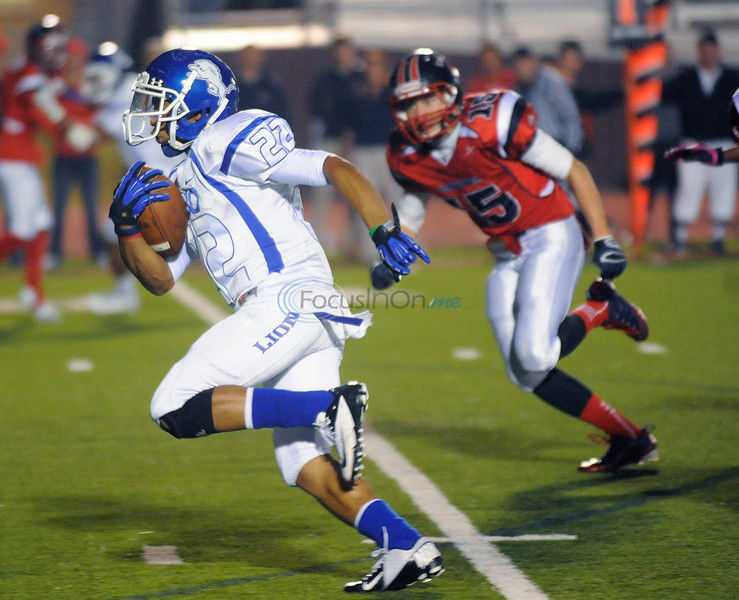 JT's Reggie Gipson runs up the middle from the 14 for a TD against Frisco Centennkal Friday at Ennis. (Herb Nygren Jr. | Tyler Morning Telegraph) 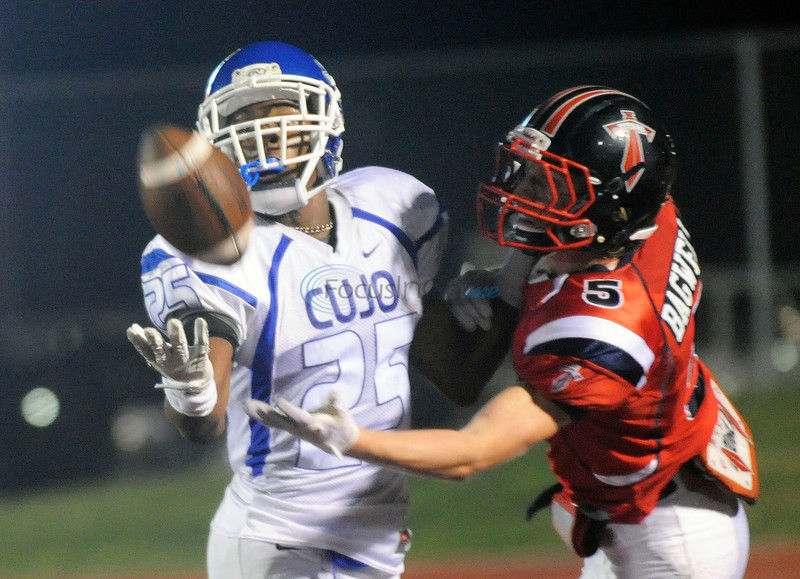 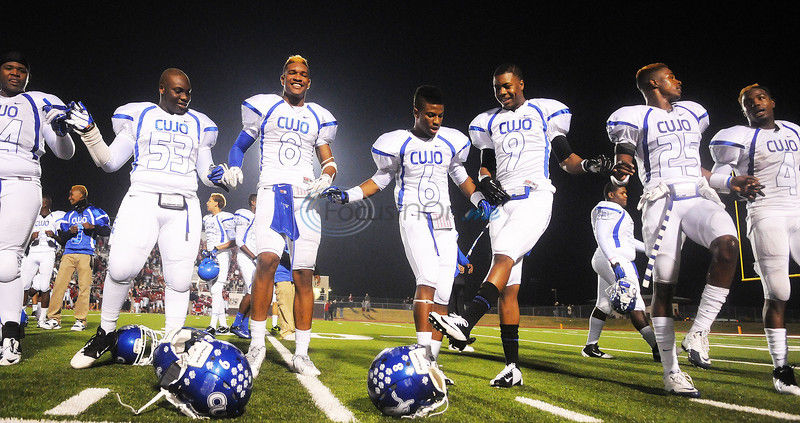 JT's Reggie Gipson runs up the middle from the 14 for a TD against Frisco Centennkal Friday at Ennis. (Herb Nygren Jr. | Tyler Morning Telegraph)

ENNIS — John Tyler kept its championship poise, and moved one step away from playing for a Class 4A Division I state football title.

Thanks to a big night from all-state senior receiver Fred Ross, John Tyler controlled the second half and rolled into the state semifinals with a 38-24 win over Frisco Centennial in the Region II title game Friday at Lion Memorial Stadium.

The Lions (13-1) advance to the final four at 7:30 p.m. next Friday against either Denton Guyer (in Midlothian) or North Richland Hills Birdville (at Waco ISD Stadium). Guyer and Birdville meet today for Region I supremacy.

Centennial (12-2) wrapped up its most successful season in the nine-year history of the program after leading briefly in the third quarter.

JT's 2011 campaign ended in the state semifinals, serving as motivation for the Lions all season. The Lions lost three starters to injury during the game, but overcame it with another solid effort from the offense (475 total yards, 26 first downs) and a big-play defense that forced four turnovers.

"That just lets you know we have some quality backup guys, being able to play through injuries, and guys filling in and getting the job done," JT head coach Ricklan Holmes said. "We're back to where we need to be."

Ross reeled in 13 catches for 172 yards and three TDs. Ross caught his final TD grab from backup Tyus Bowser on a fade pattern to the back of the end zone for a 35-24 lead early in the fourth quarter. The Oklahoma State commit produced his biggest reception day yet, doing so while matched up most of the game with Centennial cornerback Ranthony Texada, a TCU pledge.

"I wasn't looking at the one-on-one matchup," Ross said. "I was just looking for our team to win and I'm glad we did. We're finally back."

JT held Centennial to one TD in the second half, coming up with two interceptions in the process. Traven Johnson showcased his agility and footwork for a pick in the end zone — just inbounds — to ruin Centennial's comeback attempt with less than five minutes left.

Andrew Clark caught another interception to finish off the victory. Richard Gipson picked off another pass for JT before injuring his hand.

Centennial claimed a brief lead (17-14) early in the second half after a 42-yard field goal by Austin Shoemake. JT responded in 70 seconds to take the lead for good on Greg Ward's 46-yard scoring pass to Ross.

Ward zipped his way to a 40-yard run later in the quarter for a 28-17 advantage. Ward left the game twice shaken up, not before compiling a stellar night with 396 yards of offense and three TDs. Ward connected on 25 of 33 passes for 308 yards and two TDs, and rushed 13 times for 88 yards and a score.

"We're going back to where we were last year," said Ward, who predicted he would play in the state semifinals. "Now the job is to finish out."

JT never trailed, or exhaled in the first half.

Centennial pulled even on Kamari Burnett's 3-yard run early in the second to cap an eight-play, 72-yard drive.

JT answered right back in less than three minutes with a 75-yard go-ahead drive. Reggie Gipson gave JT back the lead with a 14-yard burst up the middle.

The Lions thwarted a promising Titans drive when DeQuante Woods recovered a fumble at the JT 21 after Centennial returned a kickoff 75 yards. JT failed to capitalize, however, after an injury to center Chris Starling interrupted a drive near midfield.

Centennial caught a break with a pass-interference penalty on JT, and evened the game moments later on Lamar Jordan's 12-yard pass to D.J. Jackson late in the second half.

The JT offense remained a constant, totaling more than 200 yards in both halves, and hitting the 35-point plateau for the ninth straight time.

"We had some injuries but the guys fought and played hard," JT offensive coordinator and assistant head coach Antoine Bush said. "We told them in the second half it would come down to execution. We made plays when we had to and the defense made stops. It was a collective effort."

The JT defense adjusted to Centennial's passing attack in the second half after the Titans converted 75 percent of their attempts through two quarters. Centennial completed just 8 of 28 passes over the final two quarters.

"We did some great things in the first half. We just didn't capitalize on all the things we needed to do," Holmes said. "In the second half we got it under control and we were able to pull it out."

Class 4A Division I State Quarterfinal