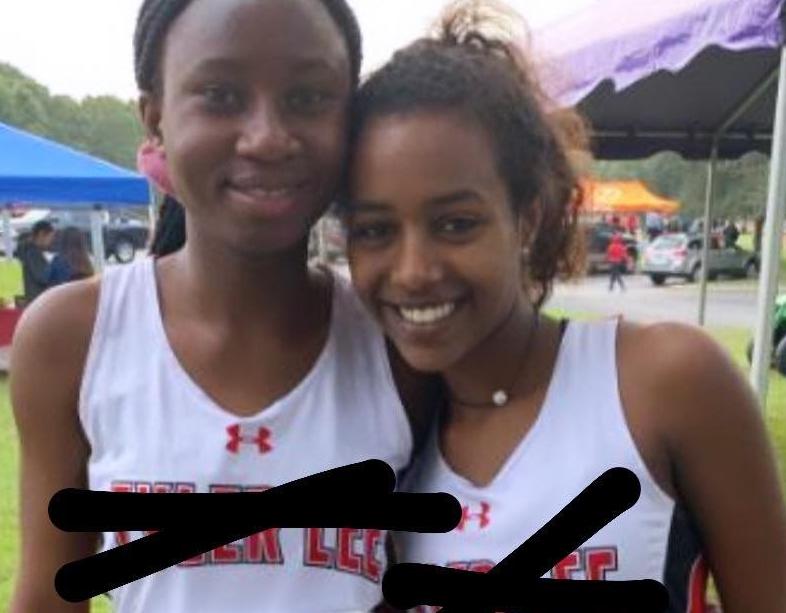 Trude Lamb and Hewan Knight pose for a photo together after a cross country meet. They altered the photo. 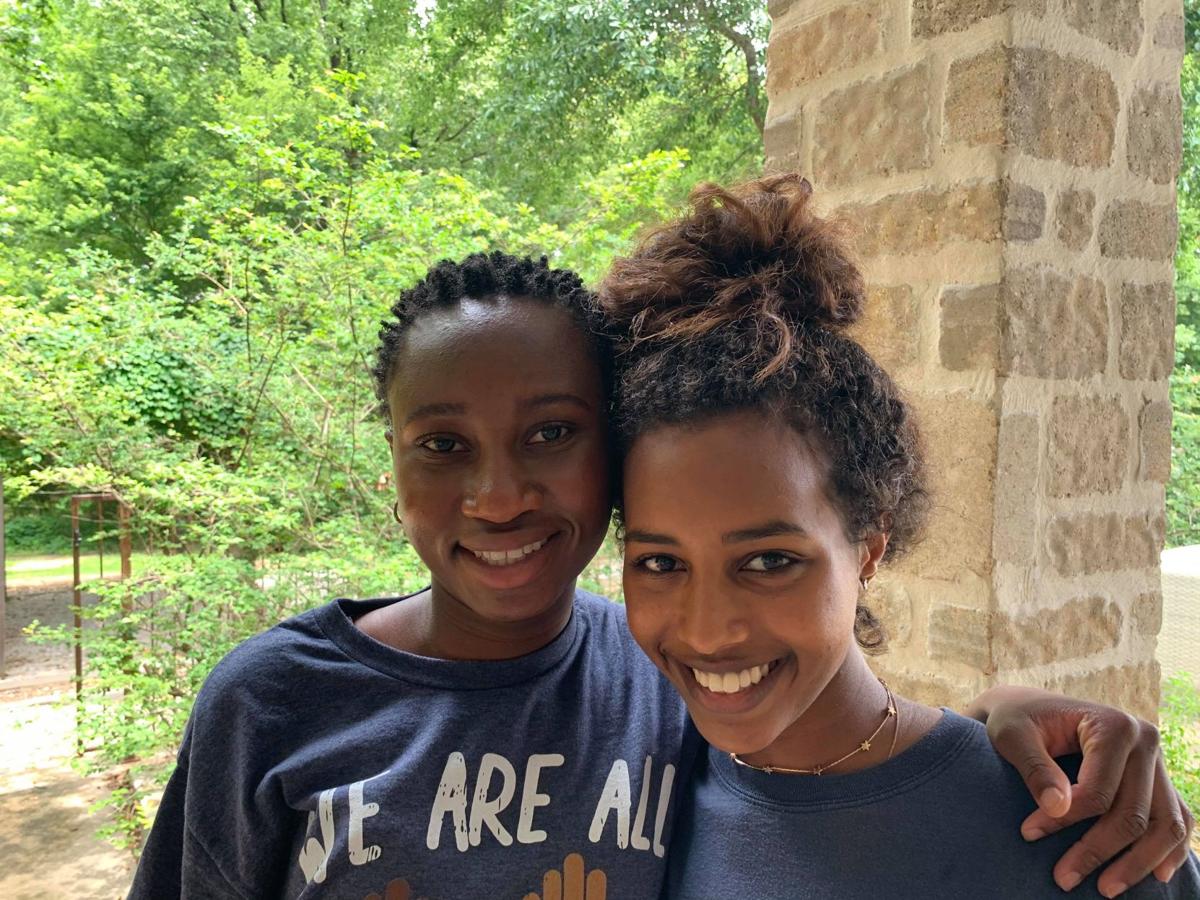 Trude Lamb and Hewan Knight pose for a photo together. (Courtesy)

Trude Lamb and Hewan Knight pose for a photo together after a cross country meet. They altered the photo.

Trude Lamb and Hewan Knight pose for a photo together. (Courtesy)

The national spotlight is on the Tyler Independent School District board of trustees after a student athlete announced she would not compete for the school under the name Robert E. Lee.

Sophomore Trude Lamb was quickly joined by other students, athletes and alumni saying they will no longer represent the name. Her friend and cross country teammate Hewan Knight is standing beside her.

In the summer of 2017 Knight’s older brother Haftu spoke before the school board about the pain he felt having his name associated with the confederate general.

Three years later, Lamb and Hewan find themselves speaking to the board and feel they aren’t listening.

Lamb said that after discussing with Knight ways to garner support for the name change, they settled on writing the board. After Lamb’s mother, Laura Owens, asked if she could share it on Facebook. What happened then was so much more than they could have imagined. Within days Lamb was being contacted by media outlets all over the United States and even over seas. Earlier this week her story appeared on CNN, Newsweek, the United Kingdom’s Daily Mail, People and more.

“It was crazy. I was freaking out,” Lamb said. “I didn’t even know what to do, I was so nervous.”

Even though she was caught off guard by all the attention she pushed past the nerves because she said the message was too important.

“This has bothered me for a long time,” she said. “Because Robert E. Lee was for slavery and he was terrible to Black people. It made me feel like disgusted. Why would I want to support a person who didn’t support me or Black people?”

In her letter to the board, Lamb addresses the school’s alma mater song, which directs students to praise Lee.

“Robert E. Lee we raise our voice in praise of your name. May honor and glory e’er guide you to fame.”

Lamb and Knight said this conversation did not start three years ago, students and community members have been fighting the confederate imagery associated with the school since at least the 1970s.

As part of the federal desegregation order forcing Tyler ISD to integrate in 1970, the school also was ordered to remove confederate imagery, which was heavily tied to the school’s identity. Yearbooks show students waving the confederate flag, wearing confederate uniforms, participating in antebellum recreations, students wearing black face and even a student at a pep rally wearing a Ku Klux Klan robe in a “skit” purported to portray the “opposite of the Selma march of Dr. Martin Luther King Jr.”

One speaker at the June board of trustees, one speaker said the board was continuing to take away their history.

“Y’all took our flag away at the school, then you took our mascot away, now you want to take away the name Robert E. Lee,” Ron Purdue said as he addressed the board.

That night hundreds of protesters gathered to demonstrate outside the board meeting, pushing for a change. Purdue was among only three speakers in opposition, out of the 41 who signed up to speak.

“I think that if I’m willing to go as far as it takes for the name to be changed,” Lamb said. “Generations later, it’s been going on for so many years. The time is now, we need to change it now.”

Knight agreed and said not wearing the name Robert E. Lee on their jersey was a small price to pay, because they were ashamed to wear it to begin with. They can still run unattached, but with at least three of the school’s fastest students on board, the Lee will not get the points they earn.

They said students already are planning other ways to demonstrate, that will have a material impact on the district because they feel their voices aren’t being heard.

Options could include actions such as sit-ins or student walk outs during the school year.

“Most of the people that I’ve talked to that have not supported me throughout this are like ‘that’s my history, my heritage,’” Lamb said. “What about the Black community? What about my heritage?”

She pointed out that Tyler ISD and Robert E. Lee High School’s demographics are majority Black and Hispanic.

“Our history matters, and our culture matters,” Knight said. “It shows that the board members don’t care, that the Black community does not matter to them.”

Lamb said their coach has been supportive, and board vice president Aaron Martinez has responded to the letter thoughtfully, but the rest of the board has not. She also said her principal Dr. Dan Crawford had been supportive of her.

“People have been asking for this since 1971,” Lamb said. “I’m hoping it will be a name we can all be proud of. They can call a special meeting if they wanted to. No, they just keep making excuses.”

They said the argument that the cost was too prohibitive is frustrating, because the board chose not to act during the construction of the facility.

“Two years ago we asked, 2017 and 2018, we asked for the name to be changed, but now they’re saying it’s already up and already a problem,” Knight said. “How can you put a cost on ethics?”

Owens said that as a parent her role is just to support her daughter, and is proud that this continues to be a student-led movement.

“I would like to take just a moment as a parent, and making sure these children are safe, to call on (Board) President (Wade) Washmon to call a special meeting, he can do that and give 72 hours notice,” Owens said. “Don’t hide behind vacations, don’t punt the ball. Stand on the right side of history, call a meeting, call a vote. These students are not going to compromise with Tyler Lee.”

Owens also said she would like two board members to address photos circulating on social media, one showing what she feels is a confederacy-themed wedding and another about a trustee’s family allegedly donating a confederate battle flag once used at the school.

“As a parent, a tax payer and a business owner here in the community, we love our community and I want to be as proud of Tyler ISD as we are of these students,” Owens said.

Lamb and Knight said they also want to see the names change at other schools with ties to the confederacy, but they are starting with Lee because his image has been so glorified.

Lamb said the image of Lee doesn’t match the historical accounts of his treatment of slaves or the way he wrote about Black people.

“I feel like they don’t include everything in the history classes. They make Robert E. Lee sound like he was a hero,” she said. “The history of slavery is not (written about) as brutal, it’s almost glorified … their history books have essentially been whitewashed.”

She said their history books talk about the achievements of the south and slave owners, but not the terrible things slaves were subjected to.

Lamb said that as an immigrant from Ghana, where slavery began, she has seen firsthand the atrocities Africans were subjected to.

“I am from Ghana, Africa, where slavery first began. I came to America in 2014. I have stood in the dungeons of the slave castle and seen the three foot urine and feces stains on the walls where my brothers and sisters were kept,” she wrote in her letter. “I’ve seen the tiny hole at the top of the ceiling where they would throw food in to the captured souls. I’ve walked through the ‘Gate of No Return’ where over 12 million of my brothers and sisters were kidnapped never to return back to their home. I have worked the very fields and fetched water for my family from the very places my people were kidnapped.”

She hopes that this time, the board will listen to the students impacted by the name Robert E. Lee and the message his name sends.

I am one of you true African and 1st generation African American students at REL. I am from Ghana, Africa where slavery first began. I came to America in 2014. I have stood in the dungeons of the slave castle and seen the three foot urine and feces stains on the walls where my brothers and sisters were kept. I’ve seen the tiny hole at the top of the ceiling where they would throw food in to the captured souls. I’ve walked through the “Gate of No Return” where over 12 million of my brothers and sisters were kidnapped never to return back to their home. I have worked the very fields and fetched water for my family from the very places my people were kidnapped.

I love and enjoy the sports I play at REL. I can’t be playing sports, supporting, and going to a school that was named after a person who was against my people right here in the United States. He owned slaves and didn’t believe people like me were 100% human let alone ever go to my very high school. I cannot bear and will no longer wear his name on my race jersey. I’m currently the fastest girl on your varsity cross country team. I held that place my 9th grade year and plan to do the same my 10th grade year.

I don’t see a future of remembering a person who did nothing for our country and who didn’t care for me or my people. He continues to bring our city down.

As one of your black students, I’m respectfully asking you to take up the REL name change issue. Please vote to change the name, not to “Tyler LEE” but after someone who we can all be proud of. Using the excuse that it would be too expensive, is not okay. This town was built on the backs of my enslaved brothers and sisters. Do it in their memory and honor the future of their ancestors that are at REL.

I hope you understand where I am coming from.