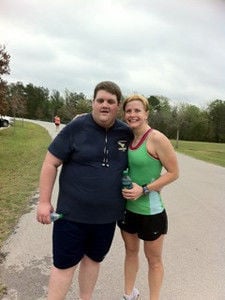 Courtesy Patrick Bowman finished his first 5K just weeks before his death in 2012.

Courtesy Patrick Bowman finished his first 5K just weeks before his death in 2012.

On Oct. 26, family and friends of Patrick Bowman hope many people will gather at Faulkner Park to not only get fit but also to remember Bowman's legacy. The 27-year-old struggled with his weight most of his life, but weeks before his untimely death, he finished a 5K race — a huge accomplishment for him.

"He'd been going to the gym and trying to stay in shape for the last several years," said Wes Hanover, a close friend of Bowman. "He'd been doing some jogging and the next thing I knew he'd run a 5K. I may be what it looks to be in good shape, but I couldn't have done it. I was pretty impressed."

Danny Saenz, general manager at Woodcreek Athletic Club, trained Bowman on and off since he was in middle school. He was impressed by his drive.

"He never stopped to walk," Saenz said of Bowman's 5K Challenge. "He ran the whole thing. He was always eager to push. He was determined to get this running stuff down."

Hanover's fiancé, Kristin Zimmerer, came up with the idea to host a 5K to honor Bowman and to benefit The Patrick Bowman Eagle Scout Scholarship of East Texas. He joined the Boy Scouts in second grade and was a big supporter of the organization.

Bowman quickly became sick with what seemed like pneumonia in both lungs last year. He was placed in a medically induced coma before being flown to a Dallas hospital, where he died 15 days later on April 28, 2012.

Months after his passing, Bowman's family learned that an extremely rare lung disease caused his death. That illness also made it difficult for him to lose weight, despite his best efforts.

Nonetheless, his mother, Patti Bowman, said he was the epitome of fitness.

"When we talk about fitness, one often thinks only of physical fitness," she said. "However, true fitness is, in my opinion, your whole being. Your body — yes, it's very important, but equally, your mind and your spirit and your personal relationships. If that's the definition of fitness, Patrick was one of the most fit people I've ever known."

Mrs. Bowman said her son was conscious of what he ate, was active and had no signs of illness until the weeks before his death.

Bowman's weight and his illness made his mother think differently about obesity. She said too often, obese people are judged and humiliated.

"It has made me look at people through different eyes," she said. "Sometimes the battles people fight against their weight and health stem from issues through no fault of their own. I believe we all need to take care of ourselves, but what may be reasonable for one person might be impossible for the next."

Although Bowman's weight loss was challenging at times, he remained encouraged.

"One thing I've watched is people who struggle and work as hard as they could to get minimal results because there's something there that they aren't aware of," Saenz said. "There's emotional pressure from that, but it didn't affect Patrick."

When it came to garnering relationships, Bowman was a "rock star," his mother said.

He valued friendships, including a close one with his maternal grandfather. He also enjoyed serving others.

"From an early age we found out that even though he had the build and the frame for athletics, he didn't have the heart for it," Mrs. Bowman said, noting that he stood 6-foot-5. "His heart was more of a Boy Scout — serving his community and helping other people."

She recalled when he bought toys for children of families displaced by Hurricane Katrina and when he sat with hospice patients.

Hanover, who lives in Flower Mound, met Patrick in the first grade and they were in Scouts together.

"I think, not only me, but a lot of people would say that he could make lifelong friends with strangers," he said.

Ms. Zimmerer added, "It was an important part of who Patrick was. When he passed away, you heard a lot of people say, ‘He was my best friend.' That really says something about a person."

Mrs. Bowman said he had a way of charming people, even when he didn't try. While at the Dallas hospital, the medical staff adored him.

"We laughed up there because we say, ‘You know he must have a big personality when people can fall in love with you and you're in a coma,'" Mrs. Bowman said.

She and her son's friends said they want participants to be inspired by Bowman's quest to be fit and the courage to face the most difficult challenges.

"I'm hoping the community doesn't forget Patrick; that they remember him and his great spirit," Ms. Zimmerer said. "I really hope (the 5K) is a great way to remember him. I don't think he will ever be forgotten."

INFORMATION: For donations or to volunteer send an email to info@patricks5K.ptweb.com. Visit www.patricks5k.vpweb.com for more information.

*Children 12 and younger may wear Halloween costumes at the race.