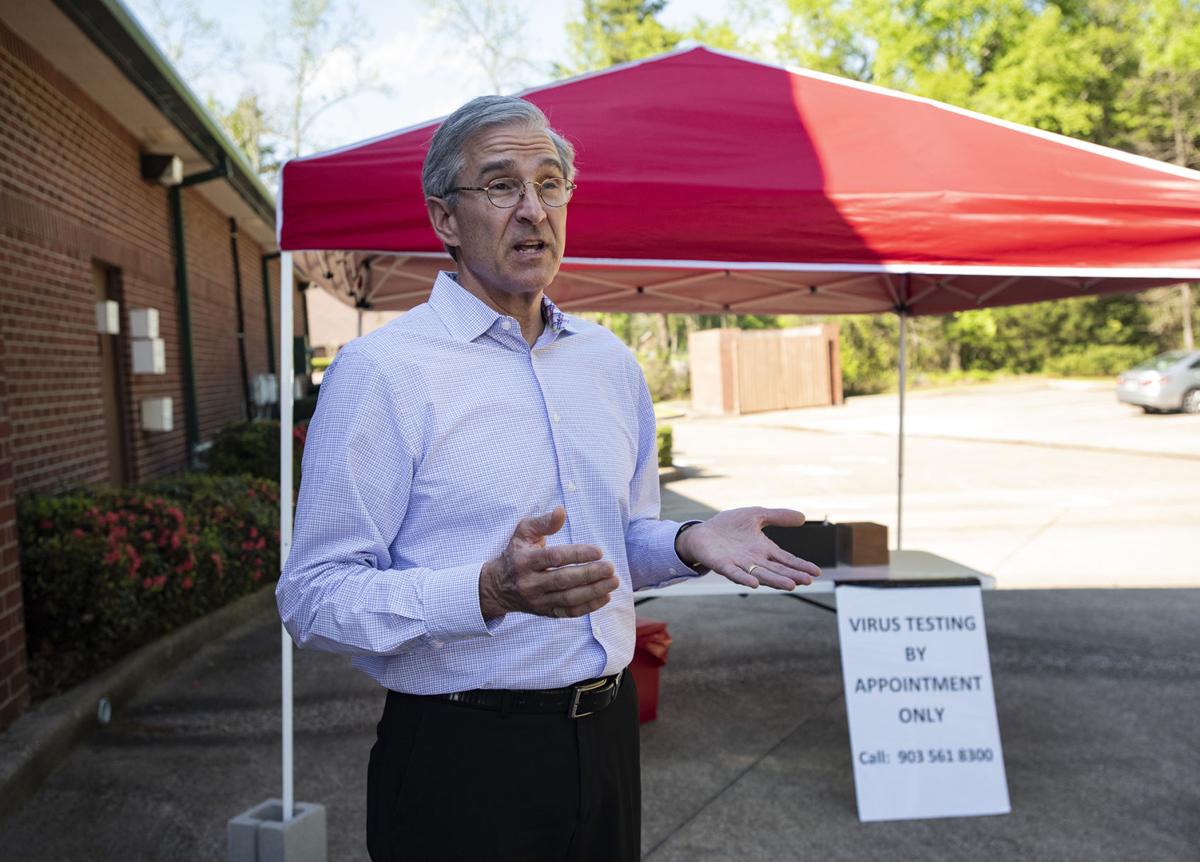 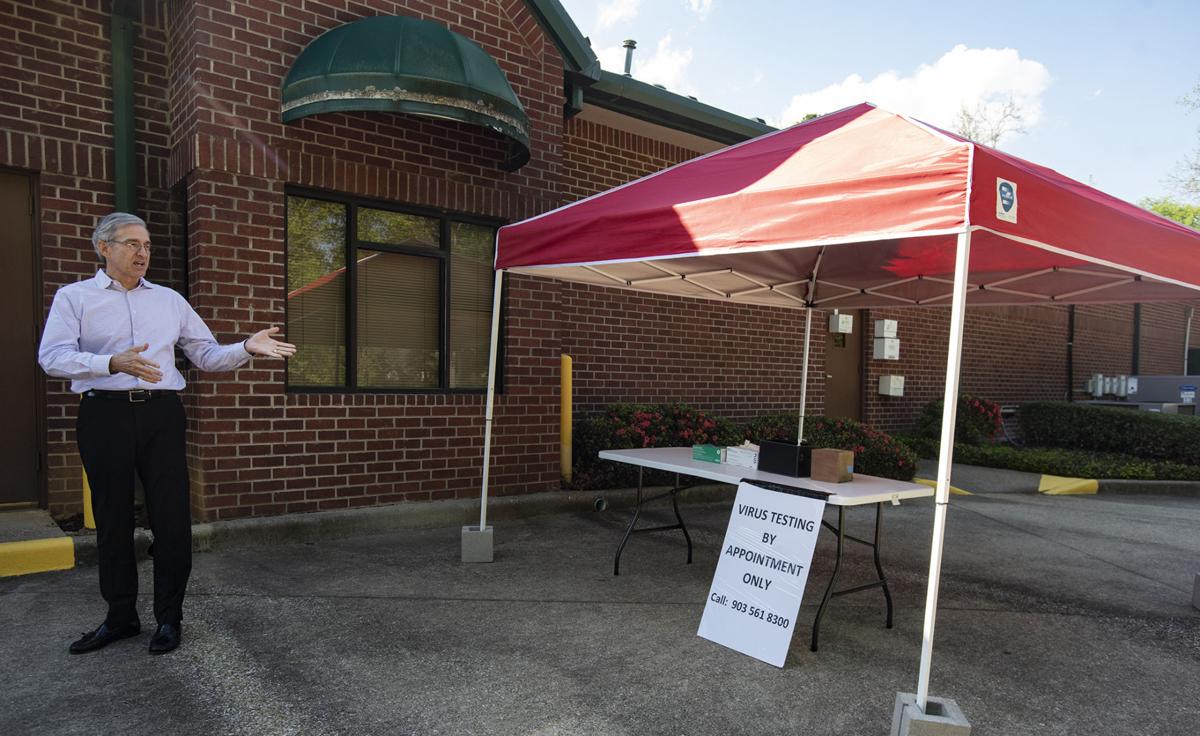 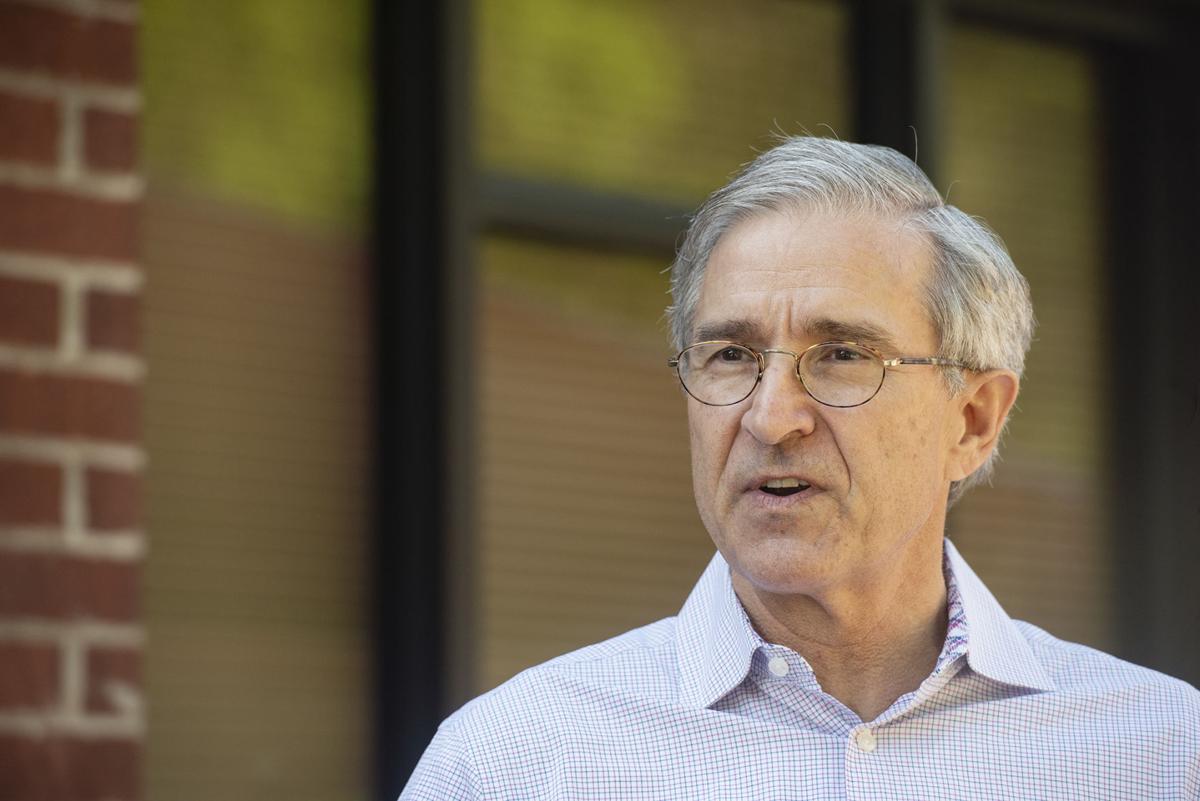 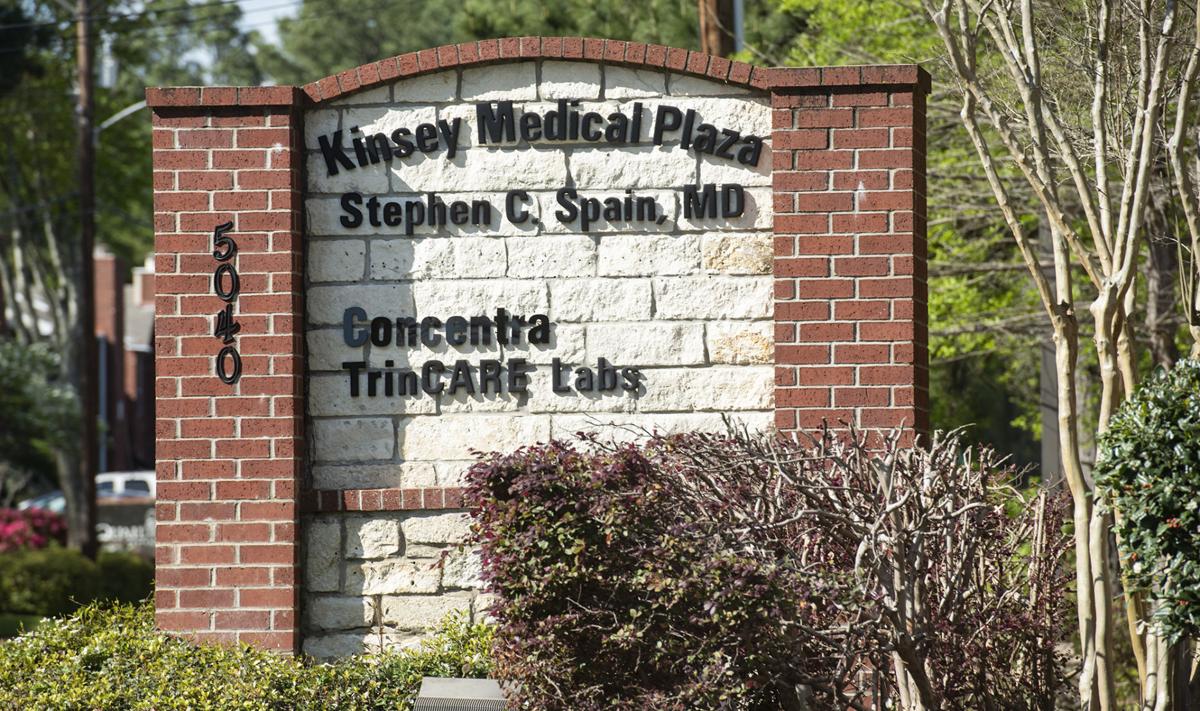 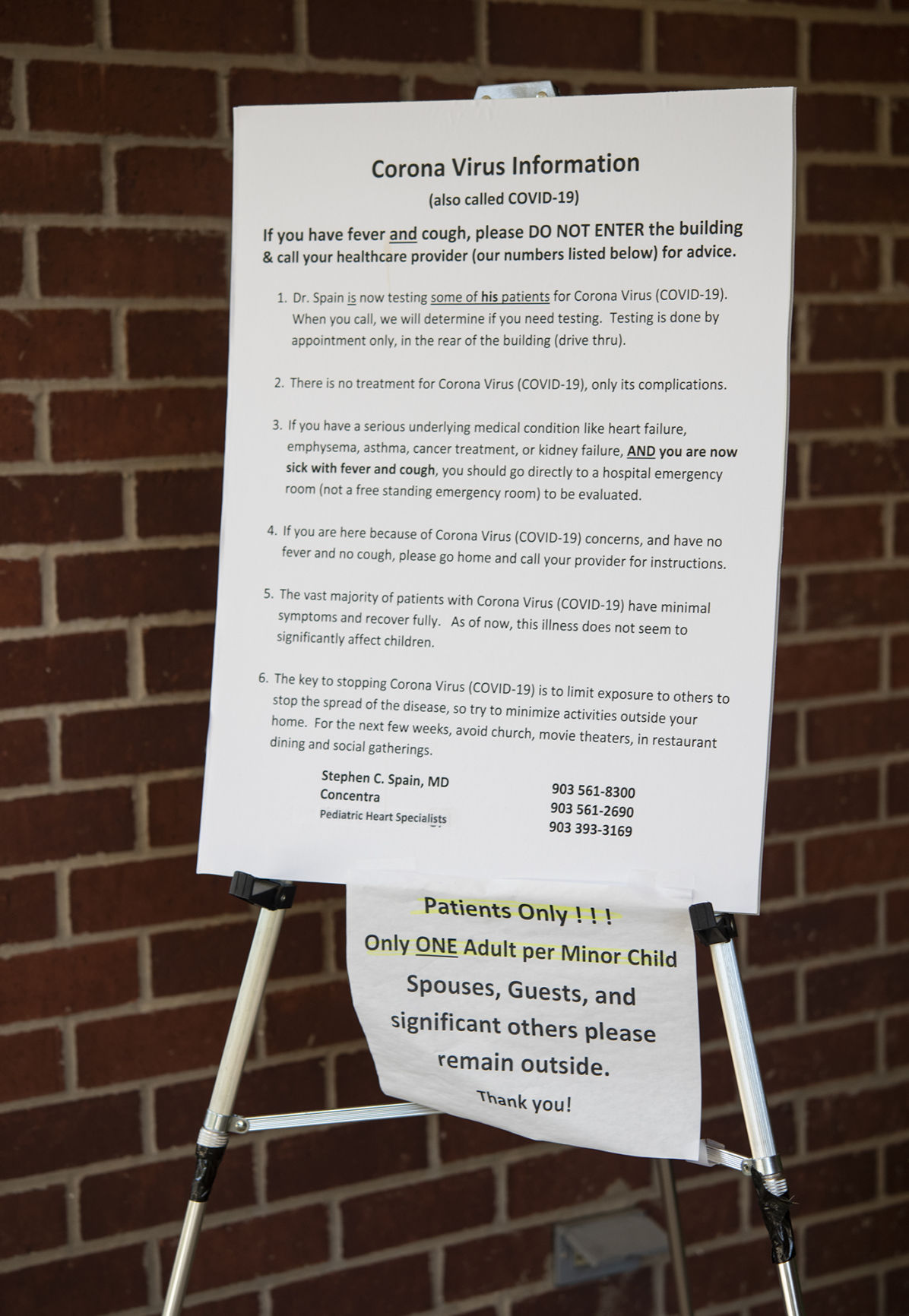 A sign with corona virus information is posted outside of the front door at the family practice office of Dr. Stephen C. Spain, MD, pictured here on Tuesday, March 24, 2020. Spain has opened an appointment-only drive-thru corona virus testing center in the parking lot of the office. Spain completed two tests today. Overall he's completed over 20 tests with three positive cases. 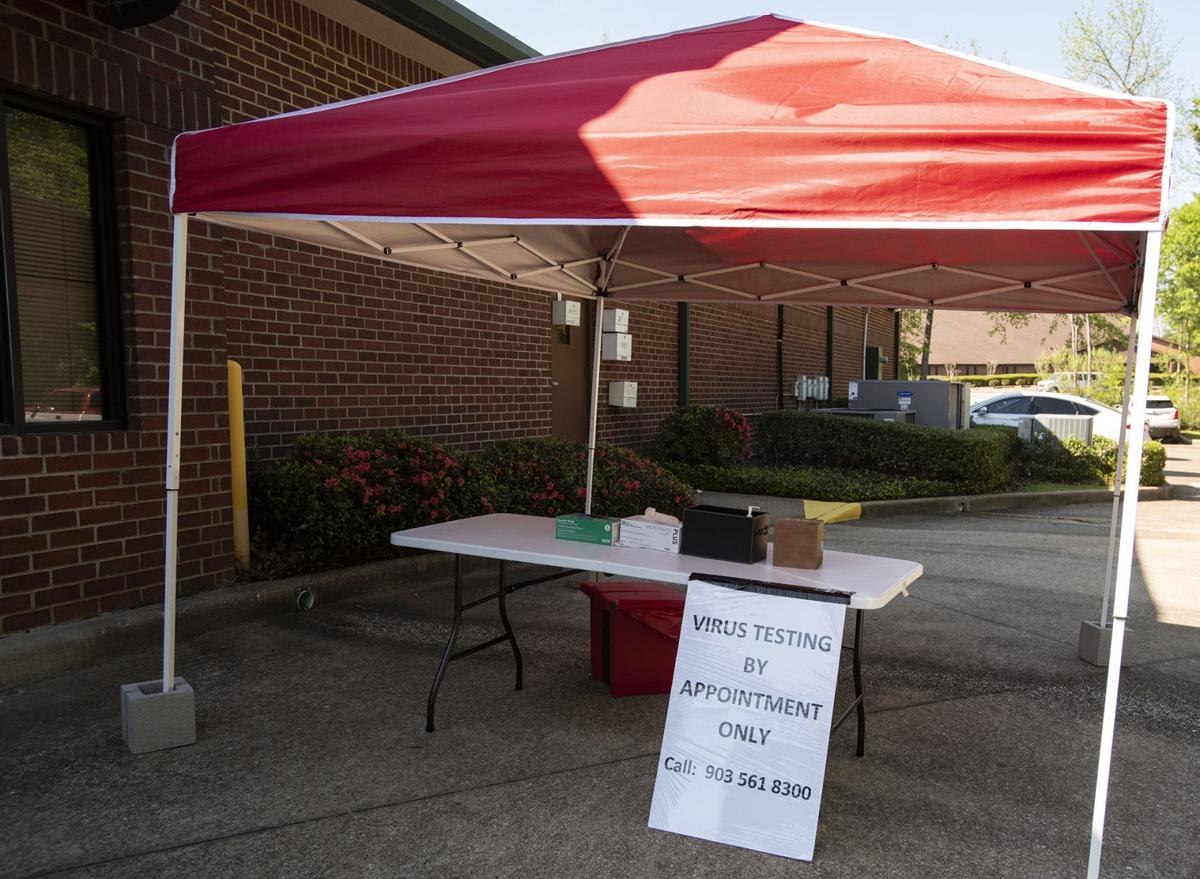 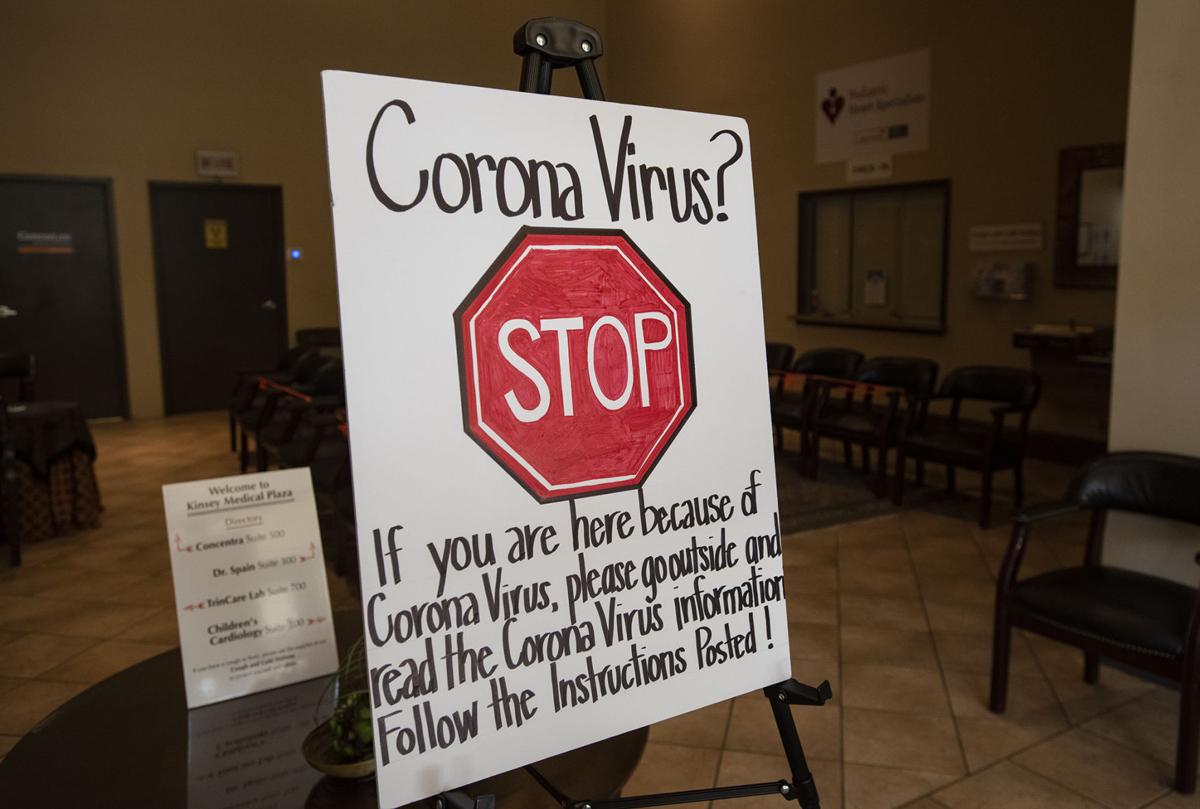 A sign with corona virus information is posted outside of the front door at the family practice office of Dr. Stephen C. Spain, MD. 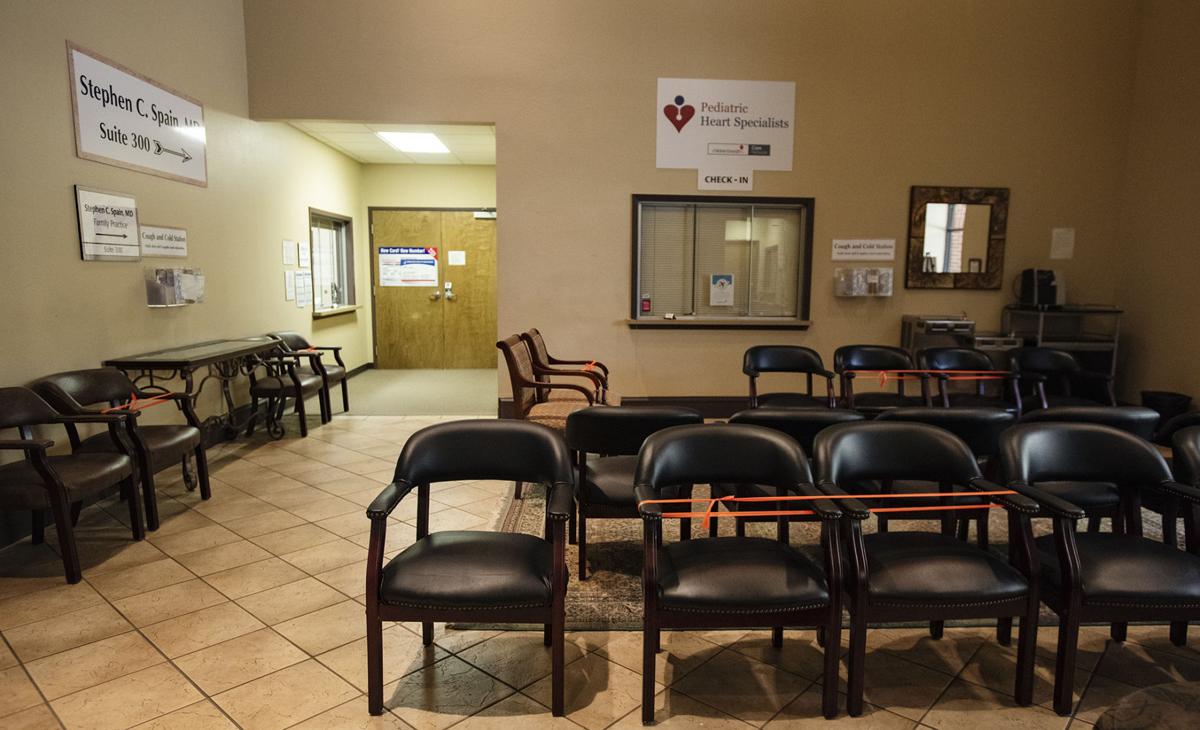 A sign with corona virus information is posted outside of the front door at the family practice office of Dr. Stephen C. Spain, MD, pictured here on Tuesday, March 24, 2020. Spain has opened an appointment-only drive-thru corona virus testing center in the parking lot of the office. Spain completed two tests today. Overall he's completed over 20 tests with three positive cases.

A sign with corona virus information is posted outside of the front door at the family practice office of Dr. Stephen C. Spain, MD.

Dr. Stephen Spain, who runs a family practice clinic in Tyler, has identified at least 3 of the 14 coronavirus cases in Smith County.

Spain said he happened to start contracting with a new laboratory recently, which led to access for COVID-19 testing for his patients. Spain said the lab has been in business for less than a year, but had the ability to test for 22 pathogens for respiratory viruses, including four other strains from the coronavirus family.

“When this one became an issue I contacted them to figure out if their test would pick up COVID-19, at which time it did not because it is genetically different from all the other strains of coronavirus,” Spain said. “They were checking into that. At the time they thought it would be weeks before they could utilize their tests.”

On March 13, Spain received word from the lab that federal red tape with FDA regulations regarding testing had been eased and the lab would soon be ready to take samples.

Spain said he worked with staff that weekend to setup procedures to limit exposure for staff and other patients. Several signs catch the attention of visitors as they walk in, letting them know not to proceed if they are coming for testing. Behind the facility a popup tent is set up with materials so patients who have been scheduled can come by for a swab in a drive-thru type setting. Patients stay in their care and a staffer in head to toe protective gear takes a sample before they’re back on their way.

Out of the first 15 tests ran by the lab, three returned positive. Spain said that in addition to the difficulty of getting tests, the paperwork physicians have to file with the CDC is also incredibly time consuming. A sample of the form shows dozens of questions about symptoms and other information ranging from travel history to contact with others and results of more than 10 other respiratory illnesses.

“It sounded scary when I had 15 tests. 20 percent sounded scary. Two of those had exposure, so we kind of anticipated they might be positive,” he said. “One we don’t know quite where they got it. I don’t think 20% of people walking around Tyler are positive, probably not even 1%. The point is it’s definitely out there and we need to be careful.”

Spain said that in his four decades in medicine he has never seen anything like COVID-19 or the response to it.

“This has been a game changer for all of us. In some respects we’ve done a great job with it, and obviously there are some areas where we could have done better and a been a lot more prepared,” he said. “I think it’s going to be a great learning experience for medicine and government in how to respond to a public health crisis.”

The danger with COVID-19 is how contagious it is. Spain said that while the virus is more contagious, it isn’t as harsh on younger, healthier people as the flu and many may not even know they’ve contracted it.

“I would say it’s much more contagious than the flu. Fortunately for young people that get it, it’s not as serious as flu is. This does not create a lot of symptoms in younger, healthier people, but this is much more contagious than flu,” Spain said. “I’ve been in practice for almost 40 years, and I’ve never had the flu and I’ve been around it every season. People can have (COVID-19) almost through casual contact, walk through a room where people have coughed or sneezed and easily contract the disease. That’s the scary thing about it.”

Spain said it’s important for people to follow social distancing guidelines and good hygiene. He also would encourage anyone with a fever and respiratory illness, especially if they have contact or travel history, to proceed as if they have COVID-19 until after they have received a negative test result or self isolated for 14 days.

“One of the biggest problems we’ve had is trying to get people who have been tested to stay in, when they feel fine about going about within the community,” he said. “If you’ve been tested, or you need to be tested, stay in and self isolate.”

Spain believes that the current nationwide social distancing can help, but it won’t mean the end of the virus. Rather this period will allow healthcare professionals and government officials to get a handle on response.

“This virus is going to be with us, I think, for several years. Each successive wave of it will probably be less, and we can hopefully mitigate it with a vaccine soon, but we’re going to be dealing with COVID for probably a couple of years,” Spain said. “This one is going to be a pretty great fire drill for the next bad one that comes along. We’ll know how to handle it better, particularly in the testing arena.”

He believes there is some merit to the argument that the virus could die down in the summer months.

“I’d say there’s experience for that sort of thing with viral infections, they do come in waves. Typically with flu it was thought that because in the winter time we all crowd indoors,” he said. “Maybe if we all get outside and enjoy the great weather like this, and distance ourselves, it will peter out.”

Spain is currently able to just test within his own group of patients, but said people should not rush out to get tests if they don’t have symptoms. He said using caution, and exercising good judgment on when to test patients likely to have the virus is the best approach.

“I don’t like the idea of testing everyone because then you’re creating a panic,” he said.