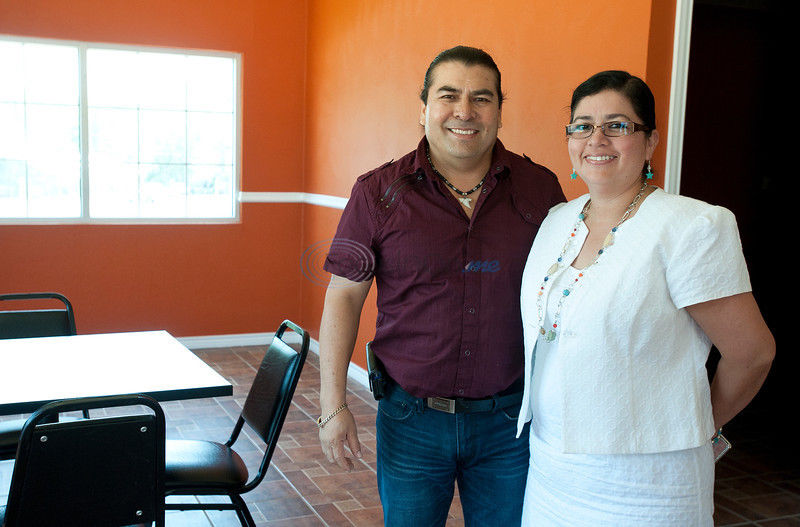 photo by Sarah A. Miller/Tyler Morning Telegraph Jorge and Sonia Limas of Tyler are the owners of the new Plaza Victoria shopping center at 2268 Montgomery Gardens off U.S. Highway 271 in Tyler. The shopping center features four Mexican businesses and a soon-to-open Mexican restaurant. 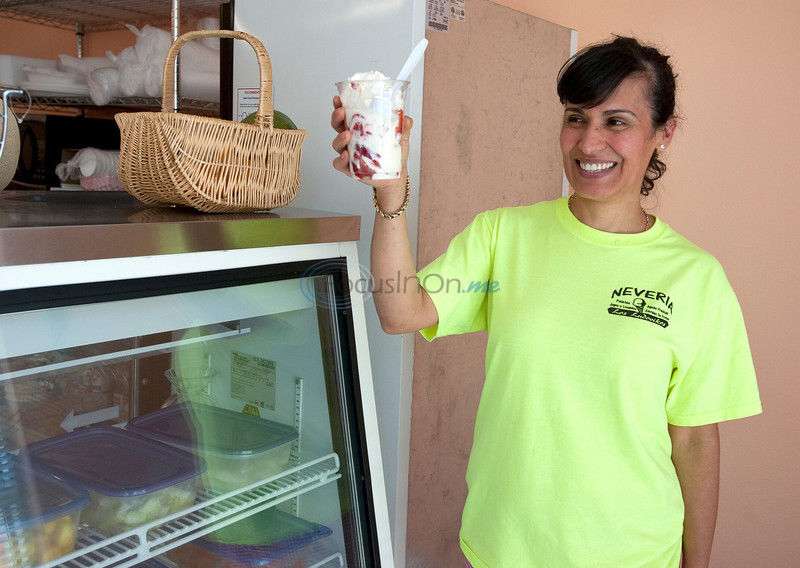 photo by Sarah A. Miller/Tyler Morning Telegraph Lorena Velazquez holds up a strawberries and cream dessert at her shop Los Ludoviko's at the new Plaza Victoria shopping center at 2268 Montgomery Gardens off of U.S. 271 in Tyler. The shopping center features four Mexican businesses and a soon-to-open Mexican restaurant. 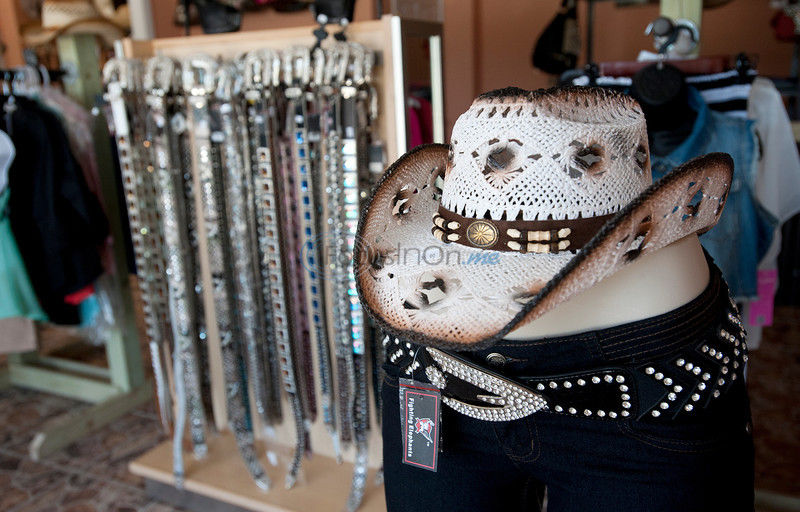 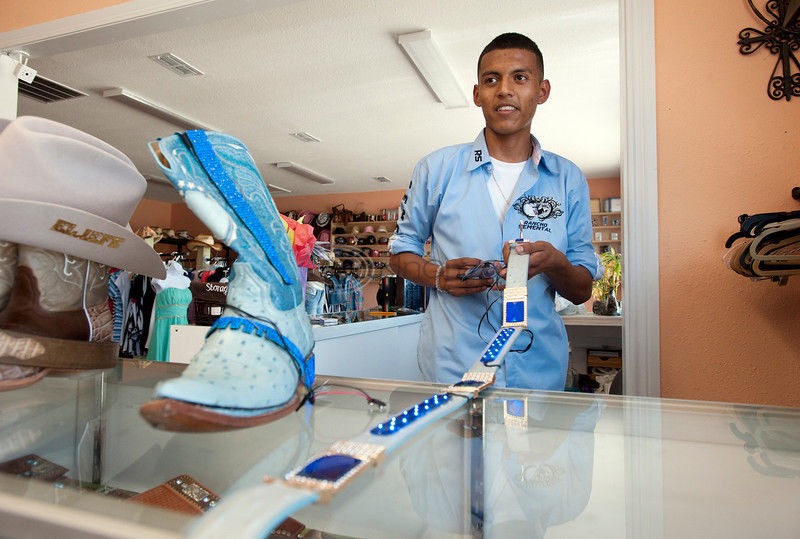 photo by Sarah A. Miller/Tyler Morning Telegraph Jorge and Sonia Limas of Tyler are the owners of the new Plaza Victoria shopping center at 2268 Montgomery Gardens off U.S. Highway 271 in Tyler. The shopping center features four Mexican businesses and a soon-to-open Mexican restaurant.

photo by Sarah A. Miller/Tyler Morning Telegraph Lorena Velazquez holds up a strawberries and cream dessert at her shop Los Ludoviko's at the new Plaza Victoria shopping center at 2268 Montgomery Gardens off of U.S. 271 in Tyler. The shopping center features four Mexican businesses and a soon-to-open Mexican restaurant.

At 17, Elder Higuer already knows he wants to own a business one day.

While he prepares for his senior year at John Tyler High School, he is spending his summer days working at his aunt’s Western wear store, Las Texanas.

Sandra Arroyo opened the shop in January at the new Plaza Victoria retail center, off U.S. Highway 271 North. She already has expanded the business into two lease spaces and also owns a restaurant on Gentry Parkway.

She is part of the ever-growing Hispanic business population in Smith County.

From January through May, 78 new Hispanic businesses opened in Smith County, according to new sales tax permits received by Hispanic Business Alliance Director Price Arredondo. That is an 85.71 percent increase from the 42 Hispanic-owned start-ups during the same time frame in 2012. There were 111 new Hispanic-owned businesses that opened in the county for all of 2012, Arredondo reported.

“What we’re seeing is (an average of 15 to 16) Hispanic-owned businesses starting up in Smith County every month,” he said. “It’s probably about 25 percent more than last year if we were to compare on a month-to-month basis.”

He said it is hard to pinpoint the reason for the substantial increase.

“I think people are feeling a little bit more confident,” he said.

Arredondo said they track new Hispanic-owned businesses by sales tax permits, as well as “dba,” or doing business as, records with the county.

On average, the Hispanic Business Alliance counsels about 15 individuals each month, Arredondo said. About 75 percent of those are looking to start a business while the others need some type of assistance with their business, such as help with advertising or a microloan.

Higuer enjoys taking engineering and design classes at John Tyler and has turned his hobby into his work. While managing Las Texanas for his aunt, he takes a part belts, boots and other merchandise to add his own flare to them before selling them.

“I want to make my own business too, and keep designing stuff,” he said, adding that he wants to become a designer some day.

Higuer recently showed off a blue leather belt that he cut up, added large blue jewels and matching buckle and battery operated lights. The belt matches boots he had added lighting to. He taught himself how to do it and has been working to add lights and other designs to boots, hats, belts, shirts and other merchandise for about six months, he said.

“I like to design basically everything. It’s pretty cool,” he said. “I like to mess with electric stuff — lights, electronics, things that run with batteries. I enjoy doing it.”

Lorena Velazquez 44, grew up in Mexico and moved to Tyler 13 years ago. Through a translator, she said, she was working in housekeeping for a hotel, but it always was a dream of hers to own a business.

In May, she opened Los Ludoviko’s, where she serves up ice cream, fruit cocktails, snow cones, milk shakes and other desserts and snacks in the Plaza Victoria shopping center.

After years of planning and dreaming, Jorge and Sonia Limas opened Plaza Victoria in December, and the center already is filled with tenants. Only one space remains available — reserved for the center’s owners, who plan to open a Mexican restaurant there this month.

After working as a trucker and a teacher for years, Limas and Mrs. Limas, who both moved to the U.S. from Mexico, hope becoming business owners will give their children a chance at a better life.

Mrs. Limas, 43, said her husband dreamed of owning a business for years.

“I guess it’s everybody’s dream to become something,” Limas said.

When Limas started his business, he had no experience, so he went to Arredondo for some friendly advice. If Arredondo didn’t know the answer, he knew someone who did, Limas said.

Based on his last six years of heading the Hispanic Business Alliance, he said “there is a great desire in the Hispanic community to be an entrepreneur.”

In general, people like to own businesses, but Arredondo feels there is an extra desire and motivation in the Hispanic community.

“I think that’s why we’ll continue to see growth,” he said.

If a snapshot of the business community was taken, it would show that most of the Hispanic-owned businesses popping up across town are service-oriented, Arredondo said.

The three highest categories are restaurants; construction trades and other businesses that support the trades, such as landscaping and cleaning companies; and auto-repair-type businesses.

“The market is still not as mature as we would like it,” he said, adding that he would like to see more value-based businesses, such as technology, open by Hispanic entrepreneurs in Tyler.

“One of the areas we’re looking at is how to attract those types of businesses,” he said, as well as how to identify businesses that would want to expand to Tyler.

He said the Hispanic Business Alliance is starting on a small scale this year but will put more emphasis on it next year. They are looking at major markets, such as Houston, Dallas, Austin and San Antonio, for companies of all kinds, including in the medical and education fields that are interested in locating here.

“We’re looking at companies that have opportunities to expand to East Texas and of course create jobs,” he said.