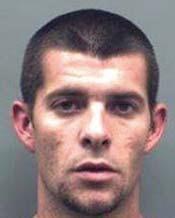 A TRAILER was stolen from an Arp construction company on Tuesday.

A TRAILER was stolen from an Arp construction company on Tuesday.

The Smith County Sheriff's Office is asking for the public's help locating a Whitehouse man believed to have made threats to buy high-powered rifles and kill anyone who stands between him and his ex-girlfriend.

Austin Ray Bowers, 26, is wanted for aggravated kidnapping and endangering a child.

Bowers also stated that he is going to be racking up felonies before he goes back to prison, according to the sheriff's office.

Bowers' legal history in Smith County dates back to 2009 and includes several drug and robbery charges, according to Smith County judicial records.

The Arp Police Department is asking for the public's help to find the person or people responsible for stealing a trailer from a job site.

A 16-foot-long trailer with a wooden floor was reported stolen from 7H Construction about 7 a.m. Tuesday.

The vehicle involved in the theft is described as a newer model white Ford extended cab utility truck. The truck was last seen leaving the worksite with the trailer.

The trailer is described as brown with rust and damages to both fenders.

Contact the Arp Police Department at 903-859-2465 with information about the trailer or person responsible for the theft.