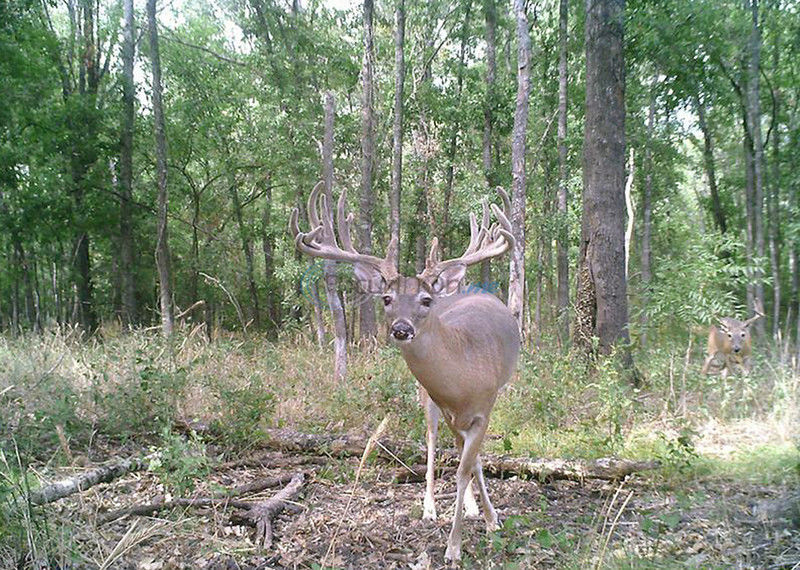 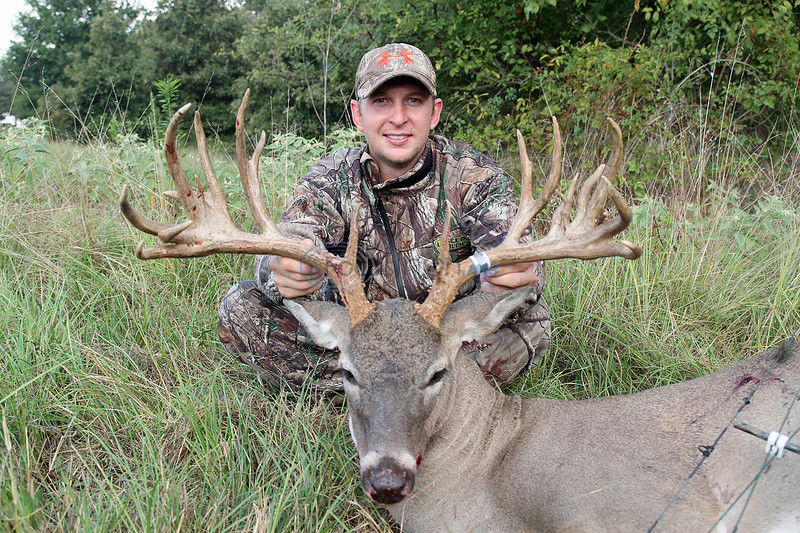 When talking about trophies coming from Rains County, typically the conversation is about big bass and Lake Fork.

Emory hunter Cody Beaver might have changed that perception some early in the archery season when he took a 20-point, non-typical brute of a whitetail scoring 187 7/8 gross.

Beaver is in his second year of hunting a 200-acre tract in the county. It is really a backup spot to his main lease in Kansas, and not some place he ever expected to come across a trophy. Rains County doesn't have a tradition of big bucks, and on this lease Beaver doesn't even have a corn feeder running.

But in his quest to find a stand locations, he was periodically throwing out corn by hand where he had put out a game camera in one spot to see what was showing up.

"The first time it showed up was the end of August, the 26th or 27th, somewhere in there. I probably checked my camera around Sept. 4 and I almost slipped out of my chair when I saw it," Beaver recalled.

Having shot bucks scoring in the 140s and 150s with his bow while hunting in Texas, Oklahoma and Kansas, he knew this was the biggest buck he had ever had a chance at. The hunter hurried and hung a stand based on the predominant south wind that blows during archery season and continued to throw out corn periodically hoping to keep the buck in the neighborhood.

"I was getting pictures of him into September, and then he disappeared for two weeks. I don't know if it was me going in there or he broke off of his summer pattern. Then he back about seven days before the season and again about six days later," said Beaver, a loan officer at Emory's First National Bank.

With the Kansas archery season already open and the Texas archery season fast approaching Beaver had to make a decision. He opted to call off a scheduled trip north to hunt the local buck opening weekend.

"On Saturday morning I hunted, but it was pretty warm. I saw one little buck," Beaver said.

The next morning the wind was expected swing to the north, so he took a backup stand and hung it in a location where the wind would be in his face.

"On Sunday I had a long walk. I got there and it was still dark when I saw the first two deer. One of them was him. He was at 40 yards. I had corn on the ground, but the wind swirled and they put their heads up and turned and walked away before I could get a shot," the hunter said.

He said when he first saw the buck he wasn't certain it was him because the cover in the area is so thick. When the deer started walking away and he could see its antler mass, he knew he had just missed a chance at the trophy.

"When he was walking away there was no mistake that was the one I was after. I left bummed out. I had an encounter with the buck, and thought I may never see it again."

Concerned he might be putting too much pressure on the spot, Beaver stayed out of the woods the next two days. Wednesday morning he was back in the first stand he had hunted because of a southeast wind. It wasn't the best stand location, but the better of the two options.

"I thought he might come in from the right where the wind was blowing," Beaver said. But shortly after 7 a.m. he heard a deer coming up a defined trail behind him. It was the 8-point buck the bigger deer had been traveling with.

"I heard steps and looked to my left and saw the 8 (point) eight to 10 yards away on the trail," Beaver said.

The bigger deer followed, but at some point became spooked by Beaver or something else in the area.

"He jumped. Something scared him. I think he winded me. It was 72 degrees and I knew I was sweating," the hunter said.

Instead of bolting, the buck took a minute to survey the situation. Knowing it was alert, Beaver wasn't in position to raise up for the shot.

"He ran 20 yards and stopped. He was trying to figure out what happened, where the scent had come from," Beaver said.

Now ready for the shot, Beaver found himself at the mercy of the deer. If it went anyway but one direction he had no shot. Fortunately the bigger buck followed the 8-point that walked right into the hunters shooting lane.

"I heard him crash about 80 yards away in the woods. I waited in the stand for 30 minutes. When I got down from the stand I had a group of hogs come in. I decided to shoot one of them, and he runs off in the direction the deer had run. I said in my mind that wasn't a good idea," Beaver said.

When he picked up the arrow he had used on the deer, Beaver could see one of the pigs rooting about 70 yards back in the woods. After following the blood trail to the deer, he found the pig had been rooting on one of the deer's hind quarters.

He also discovered that with this deer there was no ground shrinkage. The 4 ½-year-old buck had a 23-inch inside spread and main beams stretching about 19 inches each, but it was the palmated main beams that made it stand out so.

"I have not seen anything crazy-horned or so non-typical as this," Beaver said of the other deer from Rains County he had to compare it to.

"I put in what I considered a lot of hard work. It was not that many man-hours hunting, but from the end of September I worked on where to put stands, how to walk in there. It was a big accomplishment," Beaver said.

Although a trophy, Beaver's deer isn't the best known from Rains County. That would be a 211 3/8 bow kill taken by Tommy Couch in 1988.