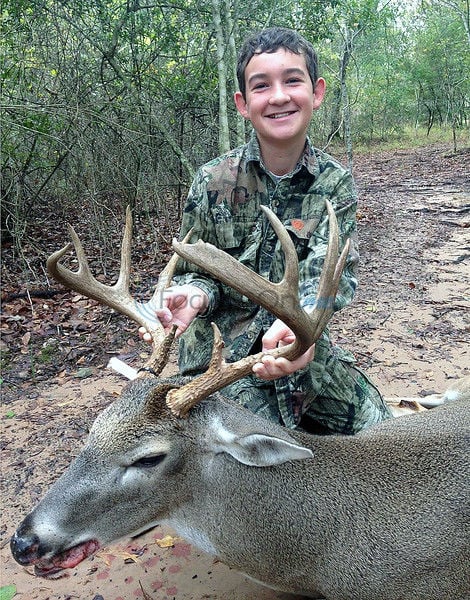 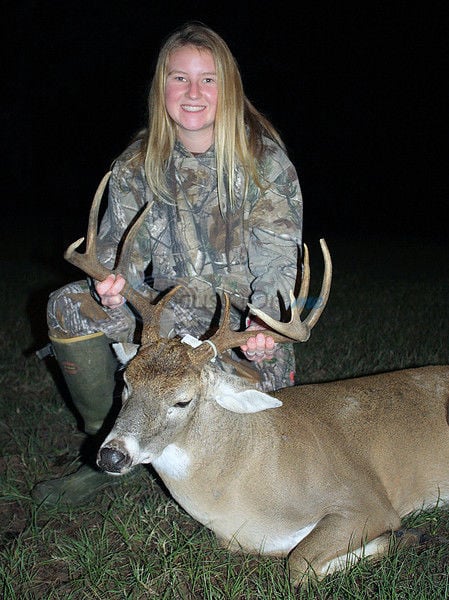 Former Tyler resident Dean Parker provided an early indication of just how good this year's deer season could be when he brought his son and daughter back to East Texas to hunt.

Sawyer Parker, 12, was hunting on the youth weekend when he took a 9-point buck initially scored at 134 1/8. The Mansfield youth was hunting in Anderson County when he took the 4ﾽ-year-old buck with an 18-inch spread.

"I had planned all week that I would hunt Halloween morning and get a big buck so that I could go back home and trick-or-treat. My plan worked," said Sawyer Parker.

Hunting with his dad, they got into their stand at daylight on a cool, rainy morning during the youth-only season.

They saw several small bucks, then a larger buck about 100 yards away. They watched the biggest deer jump a fence and cross a creek as it came to their feeder.

"I was shaking with excitement because I knew it was my big buck. I watched him to make sure he was the big buck. I had to wait for him to turn broad side so that I could get a good shot. After what seemed like an hour, I shot him with my .243 rifle," the young hunter recalled.

"It had rained all night long and didn't stop until about lunchtime. Even though we had seen many deer already, I knew that since the rain had stopped more deer would be moving around and I was hoping that a big one would come out," she said.

Most of the deer they were seeing were too far until just before sunset when a doe walked in with a buck following a short distance behind.

"They both came all the way to the feeder which was about 75 yards away. I knew the buck was legal, but I wasn't sure if I wanted to shoot him or not. After about five minutes of my dad and I both watching him under the feeder, we decided that he was a good buck and I should shoot him," Taylor said.

She calmed enough to get the crosshairs on the buck's shoulder and dropped it in its tracks.

Both hunters are registered in the Tyler Paper's 36th Annual Big Buck Contest, Sawyer as a youth and Taylor in the Adult Women's division. Whether they are in the running for one of the contest's prizes will be determined after the season at a buck scoring day scheduled Jan. 23 at The Nature Center, 11942 F.M. 848.

The scoring day is being held in conjunction with the Texas Parks and Wildlife Department, and will include scoring for both the Big Buck Contest and the 2015-16 Texas Big Game Awards program. TPWD Wildlife biologists who are certified Boone & Crockett and TBGA scorers will be available throughout the day to score any Texas buck taken during the 2015-16.

To participate in the Big Buck Contest hunters will still have to pre-register in advance of taking their deer.

There is no registration for having a deer scored for the Texas Big Game Awards program.

Deer for both may be taken throughout Texas, however, those entered in the Big Buck Contest may not be taken from behind a high fence.

In the two youth divisions, one for boys and one for girls 16 and under, first through third place winners will receive gift certificates.

Contest hunters who kill a good deer during the season can still get their story and picture in the Tyler Paper by sending information to outdoor@tylerpaper.com.

Those that are not used for feature stories will be used in the paper's Focus on the Outdoors photo section or could find their way onto Tyler Paper's new outdoor web page, Texasalloutdoors.com.