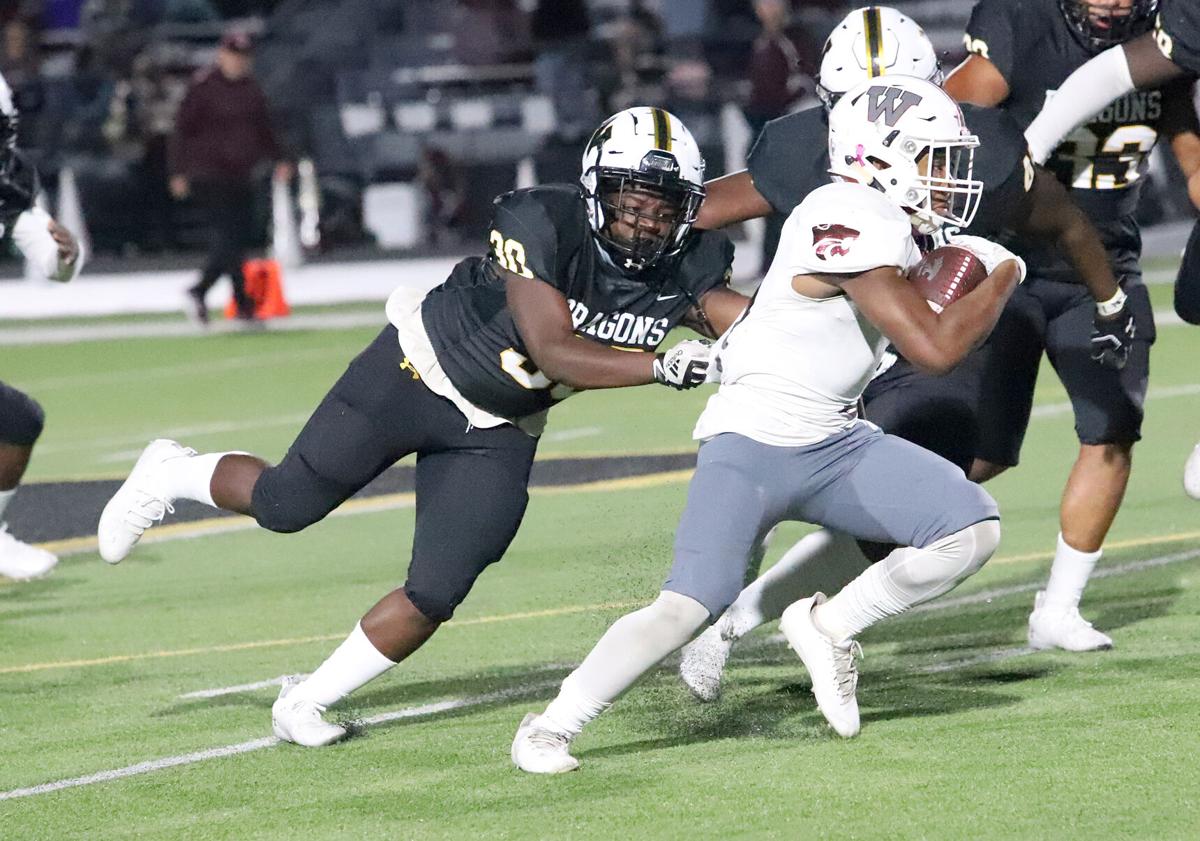 Whitehouse running back Mikevic Hall tries to escape the grasp of Nacogdoches linebacker William Whitaker (30) during Friday night’s District 9-5A DII opener at Dragon Stadium. The Wildcats won the game, 35-17. 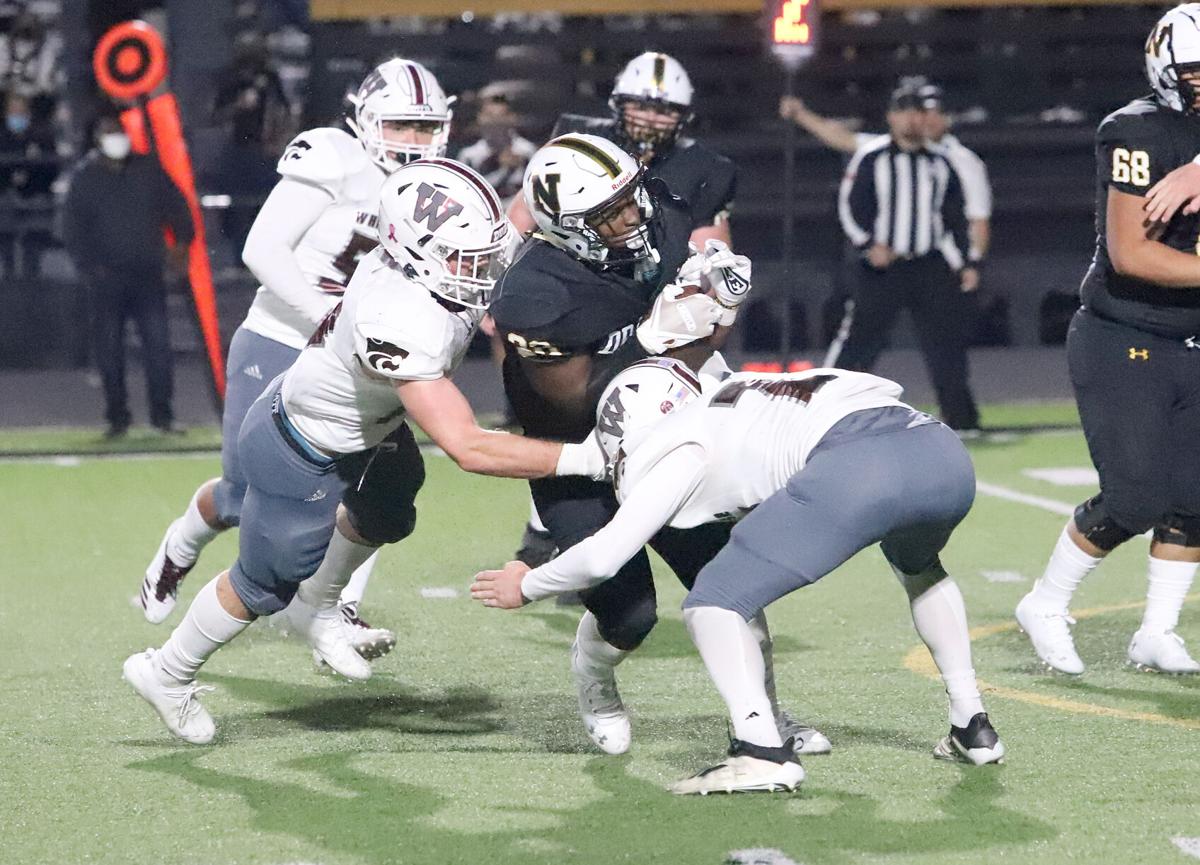 Whitehouse defenders Jack Clark (left) and Eric Brody (right) team up to take down Nacogdoches running back Glenn Young during the first half of Friday night’s District 9-5A DII opener at Dragon Stadium.

Whitehouse running back Mikevic Hall tries to escape the grasp of Nacogdoches linebacker William Whitaker (30) during Friday night’s District 9-5A DII opener at Dragon Stadium. The Wildcats won the game, 35-17.

Whitehouse defenders Jack Clark (left) and Eric Brody (right) team up to take down Nacogdoches running back Glenn Young during the first half of Friday night’s District 9-5A DII opener at Dragon Stadium.

NACOGDOCHES — A little craziness always happens when Whitehouse and Nacogdoches get together on the football field.

Friday night was no different, but this time, they didn’t wait until the fourth quarter.

There were three turnovers in the first 1:12 of the contest and a safety midway through the opening frame.

Nacogdoches led 17-14 heading into the fourth quarter, but the Wildcats scored 18 points in the final 9:50 to come away with the 35-17 victory at Dragon Stadium.

“It wasn’t pretty, but that’s why we concentrate all week,” Whitehouse head coach Marcus Gold said. “We’ve got to play well on offense, defense and especially special teams, and special teams has helped us out for four straight weeks now. Those guys get after it.”

The last three meetings between the two programs have all come down to the final quarter.

Last year, Whitehouse had a 51-yard touchdown pass on a fake punt in the fourth quarter to take a 19-14 win.

In 2018, Whitehouse trailed 31-13 in the fourth quarter and scored 22 points in the final nine minutes to take a 35-31 victory in Nacogdoches.

On Friday, Whitehouse led 14-10 at halftime.

The Dragons fumbled the opening kickoff, and it was recovered by Eric Brody. Two plays later, Joey Conflitti found Trevor Theiring in the end zone for a 20-yard touchdown. Whitehouse went for two but didn’t get into the end zone to make the score 6-0 39 seconds into the contest.

On the next drive, Nacogdoches fumble again. Jayden Brandon forced the fumble, and Marshall Johnson recovered.

However, Nacogdoches got the ball right back on the next play as Dillion Williams came up with the interception. The Dragons turned that into an 11-yard touchdown pass from Reid Boyett to Ka’Mazjay Deckard to take a 7-6 lead with 8:36 left in the first half.

After a Whitehouse punt gave Nacogdoches the ball at its own 23, a bad snap rolled into the end zone, and Boyett quickly tossed the ball behind is back before getting sacked. Whitehouse nearly intercepted the pass at the 2-yard line, but the Wildcats were instead rewarded a safety to take an 8-7 lead with 5:50 left in the first half.

Ben Harris connected on a 28-yard field goal with 3:03 left in the quarter to give the Wildcats an 11-7 lead.

Early in the second quarter, Jesus Ibarra answered with a 30-yard field goal to cut the score to 11-10.

Harris added a 29-yard field goal with 46 seconds left in the half to give Whitehouse the 14-10 advantage at the break.

Neither team could get much going in the third quarter. The Dragons lined up for a 31-yard field goal with just more than three minutes on the clock, but the attempt was blocked by Ryan Sanders.

The Dragons took the lead on their next drive as Boyett connected with Tyrell Gardner for a 28-yard touchdown pass to give Nacogdoches a 17-14 lead with 38 seconds on the clock.

Whitehouse regained the lead for good with 9:50 remaining in the contest when Conflitti connected with a wide-open Theiring near the opposing 25-yard line, and Theiring weaved through traffic to get into the end zone to make the score 20-17.

Whitehouse pooched the ensuing kickoff and came up with the football.

“That kick right there. Ben Harris came up big,” Gold said. “He was doing it all week in practice. I don’t know how he can do it on turf where he can kick the ball and it just dies like that. Our other kids did a great job of just getting to it.”

That led to a 1-yard touchdown run by Iven Washington with 8:03 on the clock.

Matthew Gooden scored from 10 yards out with 2:34 to play to put the finishing touches on the victory.

“The offensive line, much praise to them because they helped me out a lot,” Gooden said.”

“Our offensive line has been great all year long, led by a group of seniors,” Gold said. “They get after it. They’re the leaders of our team. And then on the flip side, the defensive line does a great job of stopping the run, and I think that’s essential in our district and the way our district shapes up. Being able to stop the run and being able to run the football can keep you in a lot of games.”

Theiring made eight grabs for 100 yards and two scores.

The Dragons intercepted three of Conflitti’s pass attempts — two by Williams and one by Eddie Cross.

Boyett threw for 158 yards and two touchdowns for the Dragons.

Nacogdoches was penalized 18 times for 123 yards.