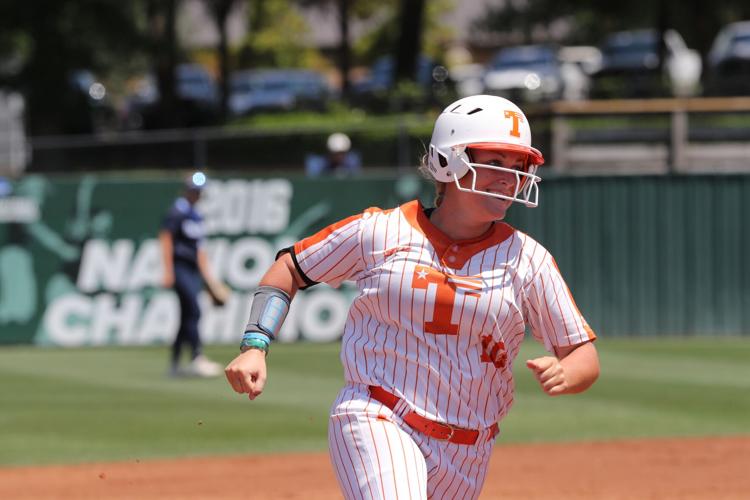 UT Tyler’s Tatum Goff rounds third after hitting a three-run home run in the bottom of the first inning against Colorado Christian Thursday at Suddelink Field. 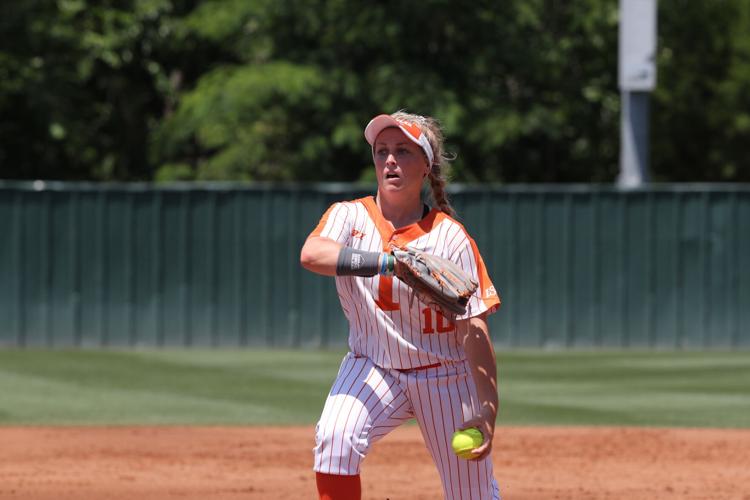 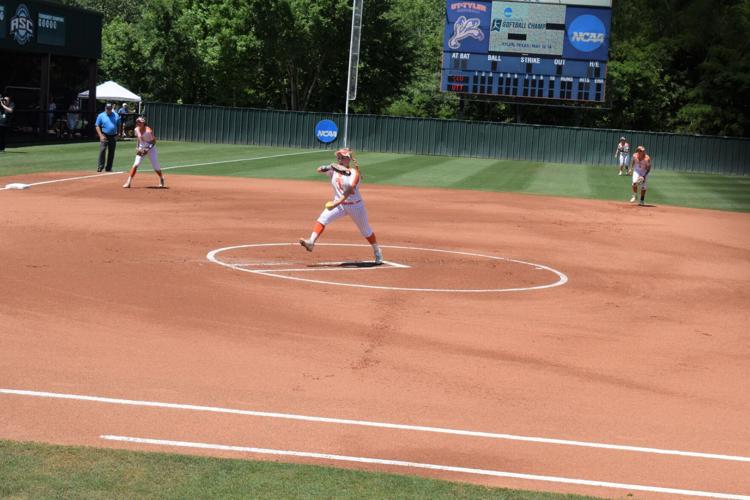 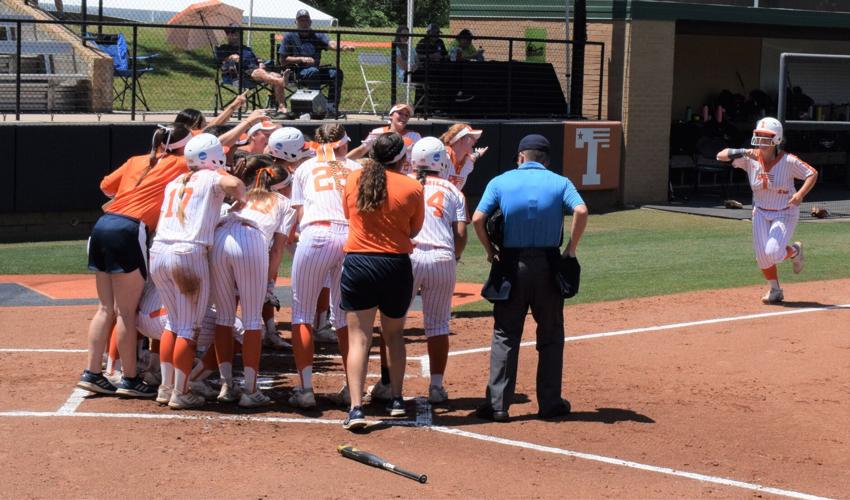 UT Tyler's Tatum Goff comes home after hitting a three-run home run in the bottom of the first inning against Colorado Christian Thursday at Suddelink Field. 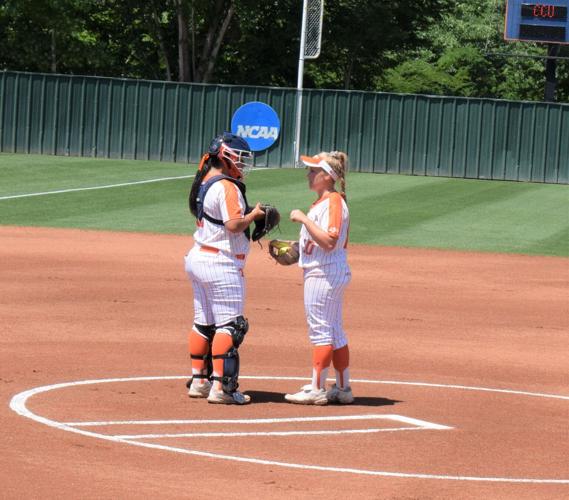 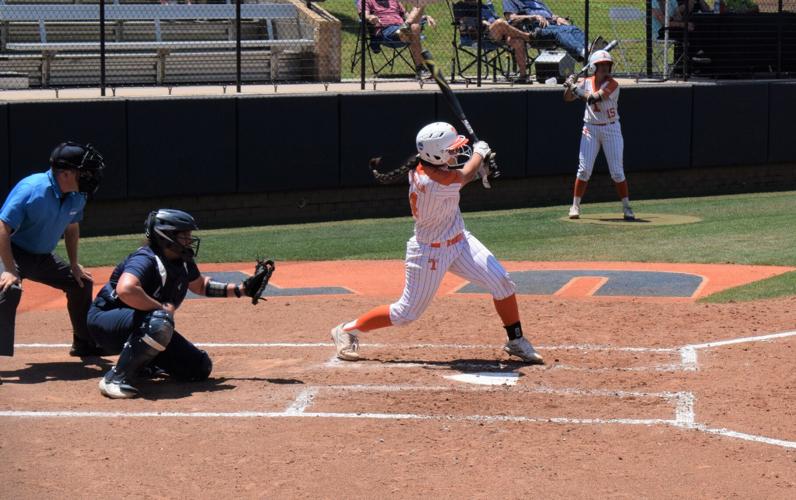 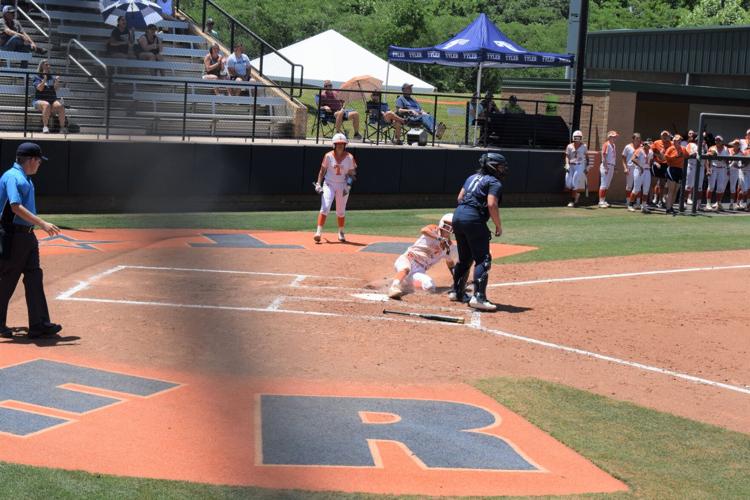 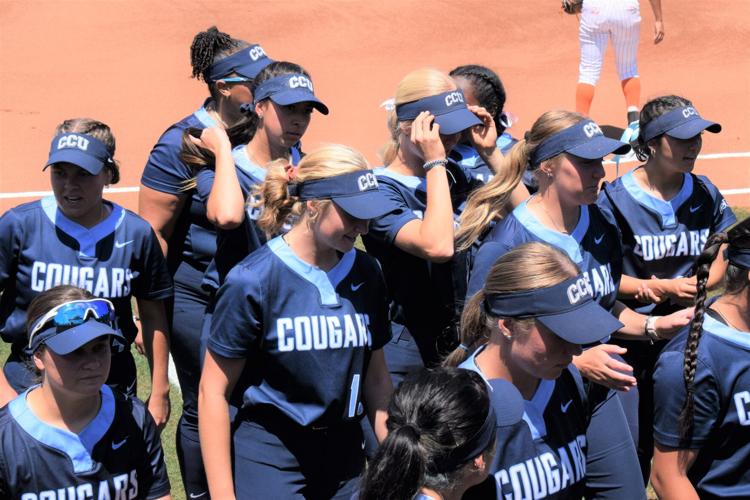 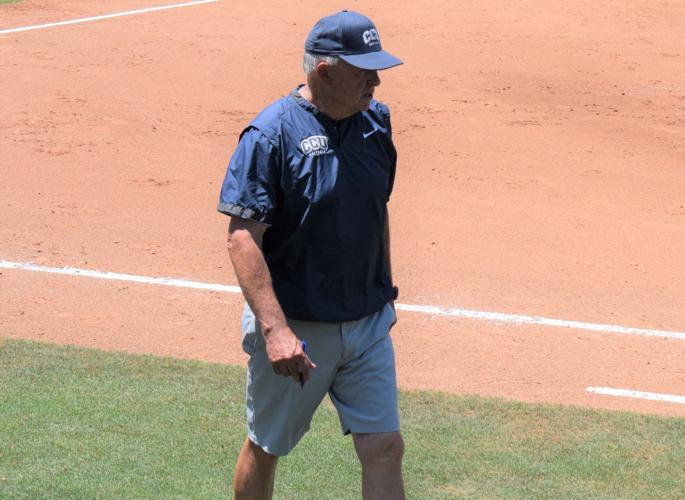 UT Tyler’s Tatum Goff rounds third after hitting a three-run home run in the bottom of the first inning against Colorado Christian Thursday at Suddelink Field.

UT Tyler's Tatum Goff comes home after hitting a three-run home run in the bottom of the first inning against Colorado Christian Thursday at Suddelink Field.

Tatum Goff gave herself an early lead with a three-run home run in the first inning.

Then she went back to the pitching circle and took care of business there, tossing a three-hit shutout as UT Tyler took an 8-0 win in five innings over Colorado Christian in the first game of the NCAA Division II South Central Region I Softball Tournament Thursday at Suddenlink Field.

Goff, a former Rusk High School standout who transferred from the University of Kansas, struck out eight batters while walking three in five innings. She was 2-for-2 at the plate with a home run, a double, a walk and three RBIs.

“When we were first talking to her about making her decision to come here, one question was would I give her a chance to swing the bat? Sure, whatever, just come play for us,” UT Tyler head coach Mike Reed said. “That’s been a great question and a great decision on my part. She really had a big imprint on our game today, as she has all year long.

“She’s grown and gotten healthier. Just to see her happy and competing, it makes a difference. Her hitting has been a pleasant surprise for us, maybe not for her (as Goff laughed in the background).”

The home run was the eighth of the season for Goff, who is hitting .383 with 25 RBIs.

After Goff retired Colorado Christian in order in the top of the first, including striking out the first two batters, it was UT Tyler’s turn to bat. Shannon Klaus singled. After Courtney Plocheck struck out, Ashley Perez singled to bring Goff to the plate. Goff sent a pitch over the center-field wall to give the Patriots a 3-0 lead.

“It definitely did help,” Goff said. “Anytime you add runs on the scoreboard, it takes a little bit of pressure off each time. It was great that our team could add runs every single inning, and every inning, the pressure got less and less.”

Amanda Marek added an RBI single in the inning to give UT Tyler a 4-0 lead.

The Patriots added two more runs in the second inning on a two-run single by Audrey Escamilla. An RBI groundout by Plocheck in the third inning gave the Patriots a 7-0 lead.

Colorado Christian (49-9) got the first three runners on in the top of the fourth inning to load the bases with nobody out.

“I try not to let the pressure build and get to me,” Goff said. “I’ve been in that situation probably two or three times this year. I always take it one pitch at a time and one batter at a time. I trust that Coach Reed is going to be calling the best pitches, and I trust my stuff.”

Goff got two straight batters to pop out in the infield and then got Samaria Roope to ground out to Bayli Simon as shortstop to end the inning.

“She’s hands down the best pitcher we’ve faced this season,” said Colorado Christian third baseman Sydney Reamer, who had one of her team’s three hits on Thursday. Reamer had a double, while Piper Lujan and Kayla Middleton each added a single.

“We struggled at the plate,” Colorado Christian head coach Larry Hays said. “This is the first time this year a lefthander has beaten us. Want to know why? Because it’s the first one we’ve faced. It’s tough to break in. It’s a big adjustment. With that and good hitting on their part, it made it a tough day for us.”

UT Tyler added a run in the bottom of the fourth inning on an RBI single by Simon, and Goff struck out three batters in the top of the fifth to end the game.

“That victory means a lot, because we know the type of program we played,” Reed said. “I thought we played well. We took advantage of some early opportunities. We had some good at-bats early and were able to push some runs across, which allows everyone to relax.”

Alexis Hamilton took the loss, allowing six runs on six hits with one strikeout and three walks in 1.1 innings.

Klaus and Marek joined Goff with two hits for the Patriots. Escamilla had a hit and two RBIs, and Plocheck, Perez, Mak Dominguez and Simon all added a hit.