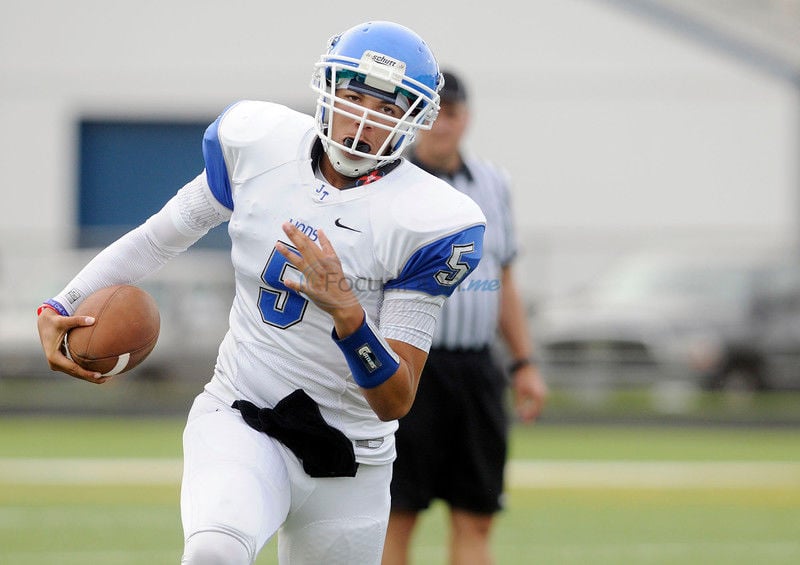 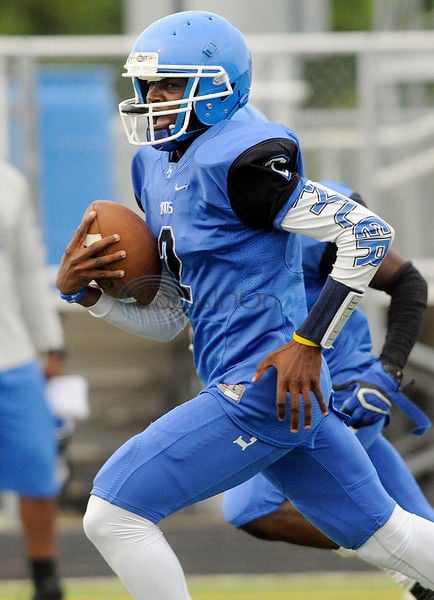 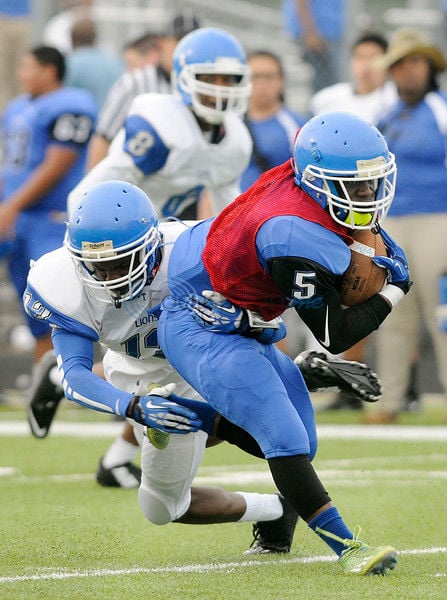 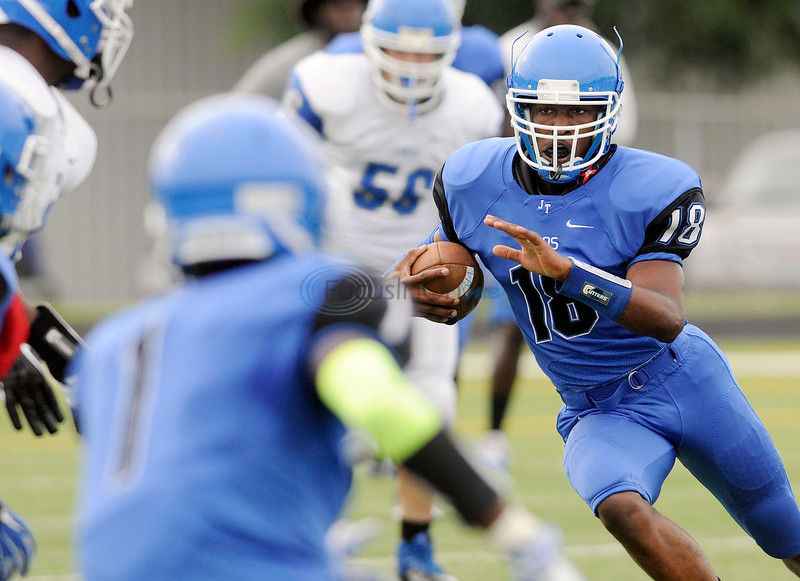 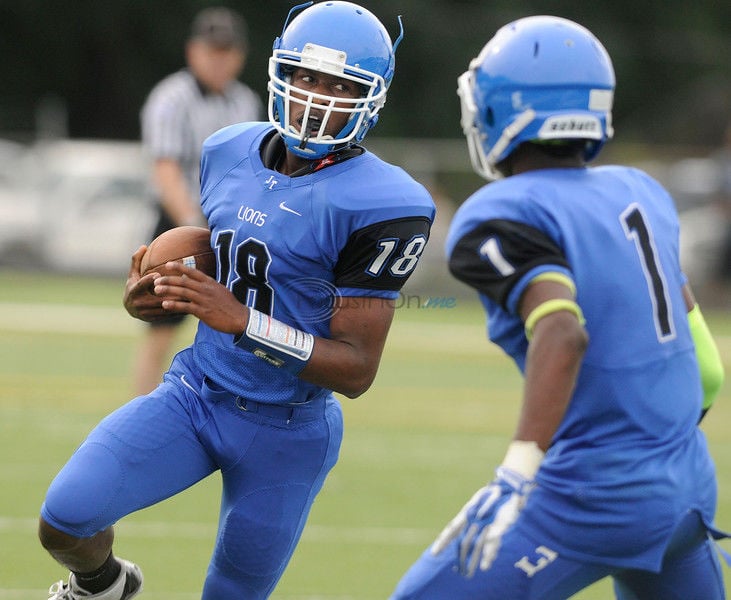 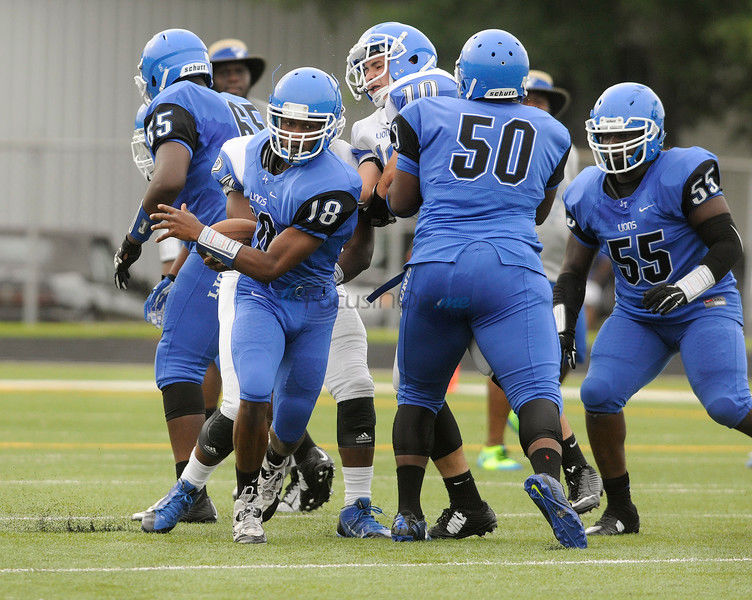 John Tyler quarterback Jamal Cuba breaks away from the pack during the spring football game Thursday night May 28, 2015 at John Tyler High School. (photo by Sarah A. Miller/Tyler Morning Telegraph) 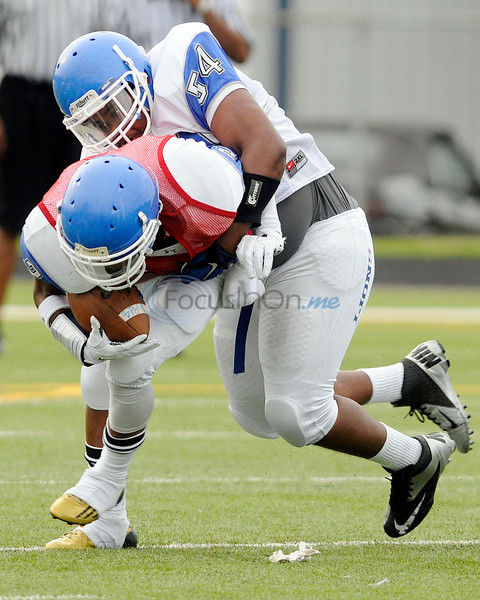 John Tyler's Quaylan Brown is brought down by Kaylon Douglas during the spring football game Thursday night May 28, 2015 at John Tyler High School. (photo by Sarah A. Miller/Tyler Morning Telegraph)

John Tyler quarterback Jamal Cuba breaks away from the pack during the spring football game Thursday night May 28, 2015 at John Tyler High School. (photo by Sarah A. Miller/Tyler Morning Telegraph)

John Tyler's Quaylan Brown is brought down by Kaylon Douglas during the spring football game Thursday night May 28, 2015 at John Tyler High School. (photo by Sarah A. Miller/Tyler Morning Telegraph)

Next in line: Bryson Smith.

Smith, a sophomore, got his first taste as the starting quarterback for the John Tyler Lions on Thursday.

Expected to be the latest in a long list of stellar signal callers, Smith began the annual Blue & White Spring Game with a 35-yard touchdown run as the Lions gave coaches and fans one last chance to gauge the team before August.

The spring game, played on campus at John Tyler Athletic Complex, featured a scrimmage with a set number of plays involving various parts of the team before giving way to a full game-situation competition of Blue vs. White.

Smith threw a touchdown in the latter portion to lead the Blue team to a 28-16 victory. Overall he completed 6 of 11 passes, including a long of 23 to Duntayviun Gross.

"It was just fun," Smith said afterward. "It's a privilege to be a quarterback at John Tyler so I'm having fun with it.

"I think I did OK. It's a spring game, everything's not going to be all pretty and stuff. We've got a lot to work on."

Smith is one of many underclassmen expected to fill in next year for 30 graduating seniors and many of them made a mark Thursday.

The one that stood out the most, however, is already a name familiar to many JT fans: Pierre Leonard.

The senior-to-be defensive lineman was a one-man wrecking crew with four sacks in the first two series in which he played, finishing with five. All while going up mostly against the first-team offense and without fellow standout lineman Braylon Jones, who was one of nine players held out with injury.

"He's a monster," JT coach Ricklan Holmes said of Leonard. "He's doing all that without the bear next to him. That lets you know how dominant he is and what kind of playmaker he is.

"He's a Division I football player no doubt, you've got to look past the 5-9 stature and understand that he can make some things happen."

Leonard led the White team in what was a defensive battle for most of the scrimmage. In all Lions players recorded 11 sacks.

Also on defense, Damion Miller, Kieran Freeman and Gross had interceptions. Miller, who also had a fumble recovery, took his pick to the house, though his team only received three points for the interception in a scoring system that gave seven points to the offense for touchdowns while awarding the defense with two points for fumble recoveries or turnovers on downs.

As for the offense, Dejuan Beal, a senior-to-be who was named as one of six captains after the game, showed glimpses of what he could offer as a successor to Jeremy Wilson, who totaled 1,776 rushing yards last year.

Beal broke off a 52-yard run to set up the Blue team's lone touchdown of game-situation scrimmage. A couple plays later Smith hooked up with Dekalen Goodson for an 8-yard score. Goodson bobbled the ball but managed to tip it to himself for the score.

Stone Johnson responded for the White team with a 17-yard TD toss to Javontavius Mosley, one of a number of underclassmen who Holmes said stood out this spring.

"He's going to be one of those corners that everybody is going to remember," Holmes said of Mosley. "He's also a pretty good receiver."

One player who was able to make an impact Thursday was Jabraylon Vanzandt. While not expected to receive playing time in the fall, Holmes and the Blue team helped thank him for his efforts by setting up a 50-yard touchdown that ended the game.

"He's a special young man," Holmes said. "Vanzandt is a kid that's worked hard and has a lot of heart and he loves this team and he loves football. It's just a kid that you want to try to take care of and you want to let him have some success so he can have some great memories from being a John Tyler Lion."

As the spring game ended exactly three months before the start of the 2015 season (Aug. 28 at Plano), Holmes said he's feeling more comfortable with this team and expects another run at a state title after reaching the state semifinals three of the last four years.

"I'm very proud of the progressive maturity of them from Day 1 to Day 15," Holmes said. "They're starting to understand what they need to do as far as being a complete team."

Smith, with the burdens of expectations as the next in line as JT quarterback after names like Geovari McCollister, Greg Ward, David Bush and Jeremy Johnson, won't be sitting around waiting for the season, not with 7-on-7 around the corner.

"(I'll be) working on my craft," Smith said. "And just trying to go on that road to winning a state championship."

LIONS TALES: Captains for next season announced by Holmes after the game were: Smith, Gross, Beal, lineman Adrian Harris, Jones and linebacker Shaundrick Williams. … During halftime of the scrimmage twin brothers Cedric and Ceidric Mosley held an anticipated 100-meter dash to determine who was faster. Cedric, a senior who finished fifth in Class 5A at the UIL state championships, won the race. … Many former John Tyler standouts attended the game, including Tyus Bowser, Justice Liggins, Fred Ross, Darion Flowers and Chris Mobley.