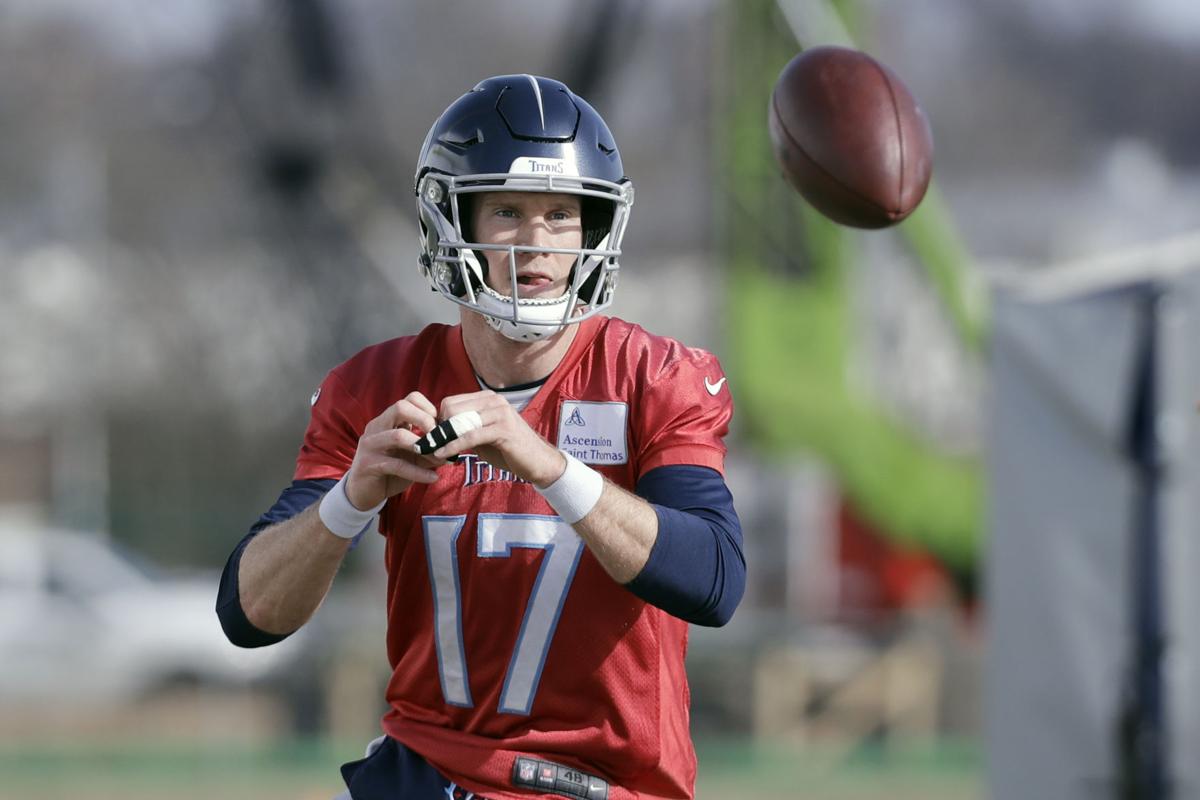 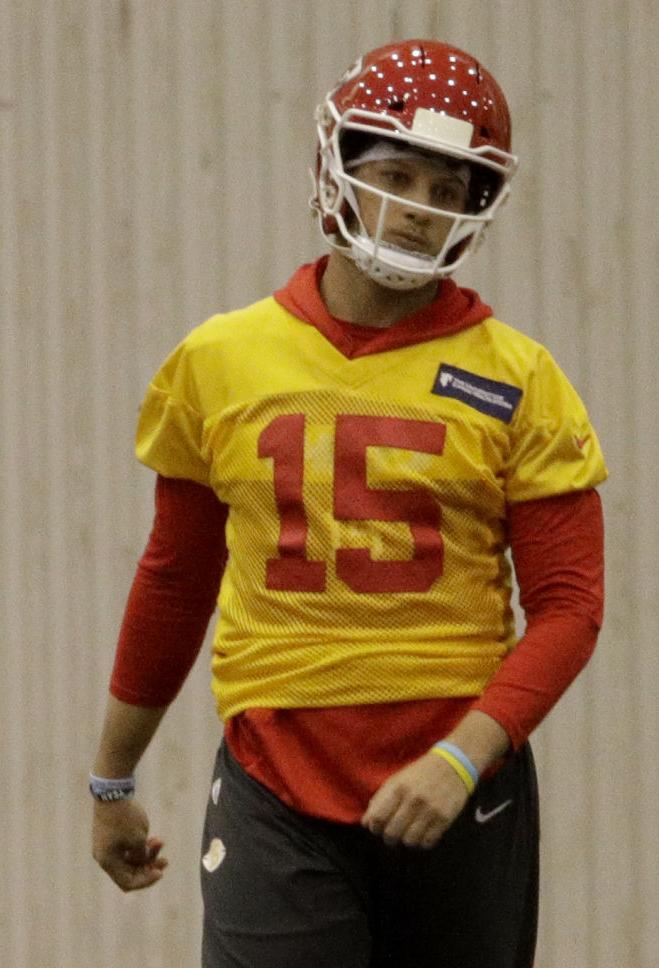 Kansas City Chiefs quarterback Patrick Mahomes, a Whitehouse native, works out Thursday during practice for Sunday’s AFC championship game in Kansas City, Mo. The Chiefs will face the Tennessee Titans for the opportunity to advance to the Super Bowl.

Kansas City Chiefs quarterback Patrick Mahomes, a Whitehouse native, works out Thursday during practice for Sunday’s AFC championship game in Kansas City, Mo. The Chiefs will face the Tennessee Titans for the opportunity to advance to the Super Bowl.

When the AFC Championship kicks off on Sunday, it will feature two quarterbacks with deep East Texas ties.

Mahomes grew up in Whitehouse and attended Whitehouse schools. He is a 2014 WHS graduate.

Tannehill played in West Texas, but his mother — Cheryl Chambers Tannehill — is a former Brownsboro Bearette and his grandparents and other relatives still reside in Henderson County.

So it is an old-fashioned Whitehouse vs. Brownsboro shootout on the big stage of the bright lights of the NFL.

All that is at stake is a berth in the Super Bowl.

Most everyone knows the Mahomes story of being the son of Major League pitcher Pat Mahomes, who grew up in Lindale, and Randi Mahomes, who was raised in Troup. As a youngster, he was in baseball clubhouses across America, being exposed to stars such as Derek Jeter and Nolan Ryan.

As a little leaguer, he was already gaining fame and he became a legend in Whitehouse and East Texas, not only as a superstar athlete but also a great student. Mahomes has since excelled at Texas Tech and now in the NFL with the Chiefs.

Add to that, the NFL superstar was named one of the “Ten Best-Mannered People” by the National League of Junior Cotillions®. Mahomes was touted “for being an esteemed leader and exemplifying outstanding sportsmanship on the field.”

Although he is 24 years old, he has already earned an NFL Most Valuable Player Award and has his Chiefs in their second-straight AFC championship game in his second year as a starter.

On Friday, his hometown was decked out in Red & Gold to show their support.

“It speaks to the people that I have grown up around — Whitehouse, Tyler, the whole East Texas area they support me,” Mahomes said. “Lubbock, Texas, where I went to college, supports me and now Kansas City supports me. I’ve been blessed that way where I’ve had great people in my life that have steered me in the right direction and I’m thankful for everything they do for me.”

Now, Mahomes hopes to lead the Chiefs to their third Super Bowl and first in 50 years.

Tannehill grew up in Big Spring, the son of former Texas Tech quarterback Tim Tannehill and Cheryl Chambers Tannehill, who was a Brownsboro Bearette basketball player who later played at Kilgore College. His mom is a 1983 BHS graduate.

“It is a very emotional time,” said Mrs. Tannehill, before the family headed to KC for the game. “It was always Ryan’s dream of playing in the NFL and being in a big game like this. This is a very proud moment.”

Ryan’s grandparents, Leroy and Fayrene Chambers, still live in the Brownsboro area, along with aunts and uncles — Robert and Michelle Chambers, Roy and Janice Chambers and Stephanie and Zane Ballard — as well as many other relatives in the area.

So the Titans will have some fans in East Texas and in Lubbock.

After Ryan was born in Lubbock, the family moved to Big Spring. There he was first a standout defensive back as a sophomore before becoming one of the state’s top quarterbacks his junior and senior season.

Coming out of Big Spring, Tannehill was a three-star recruit and after receiving offers from Houston, Tulsa, TCU and UTEP, among others, he chose to attend Texas A&M.

As a redshirt freshman, he competed against Stephen McGee and Jerrod Johnson for the starting position. Johnson won the job and Tannehill was third behind McGee. But that didn’t stop Tannehill from working toward his goal of being a starting QB in Aggieland.

There was a side trip as Aggie coach Mike Sherman asked Tannehill to move to wide receiver as that was a thin spot for the Aggies.

Being a team player, Tannehill changed positions and set an Aggie freshman record of 210 yards on 12 catches in his fifth game of the season. His finished his redshirt freshman season with 844 receiving yards, which was 11 yards shy of breaking Robert Ferguson’s (Juco All-America at Tyler Junior College) record set in 2000.

Tannehill eventually started at QB his senior season for the Aggies, finishing his career with 5,450 passing yards and 42 touchdown passes.

His performance impressed the NFL where he was drafted No. 8 overall by the Miami Dolphins.

Tannehill, who with his wife Lauren have two children — 3-year-old son Steel and 1-year-old daughter Stella — was the backup until Week 6 when he replaced Marcus Mariota at quarterback in the second half against the Denver Broncos. He was 13 of 16 for 144 yards in the 16-0 loss in Denver.

Tennessee coach Mike Vrabel liked what he saw and Tannehill was named the starter for the Week 7 game with the Los Angeles Chargers. He threw for 312 yards and two touchdowns as the Titans won 23–20 in Nashville, Tennessee.

Now Tannehill has the Titans on the cusp of their second Super Bowl appearance. And just where will Super Bowl LIV be played? That’s right, in Miami.

Whether the Chiefs or Titans win Sunday, East Texas will have a hand in the winner.