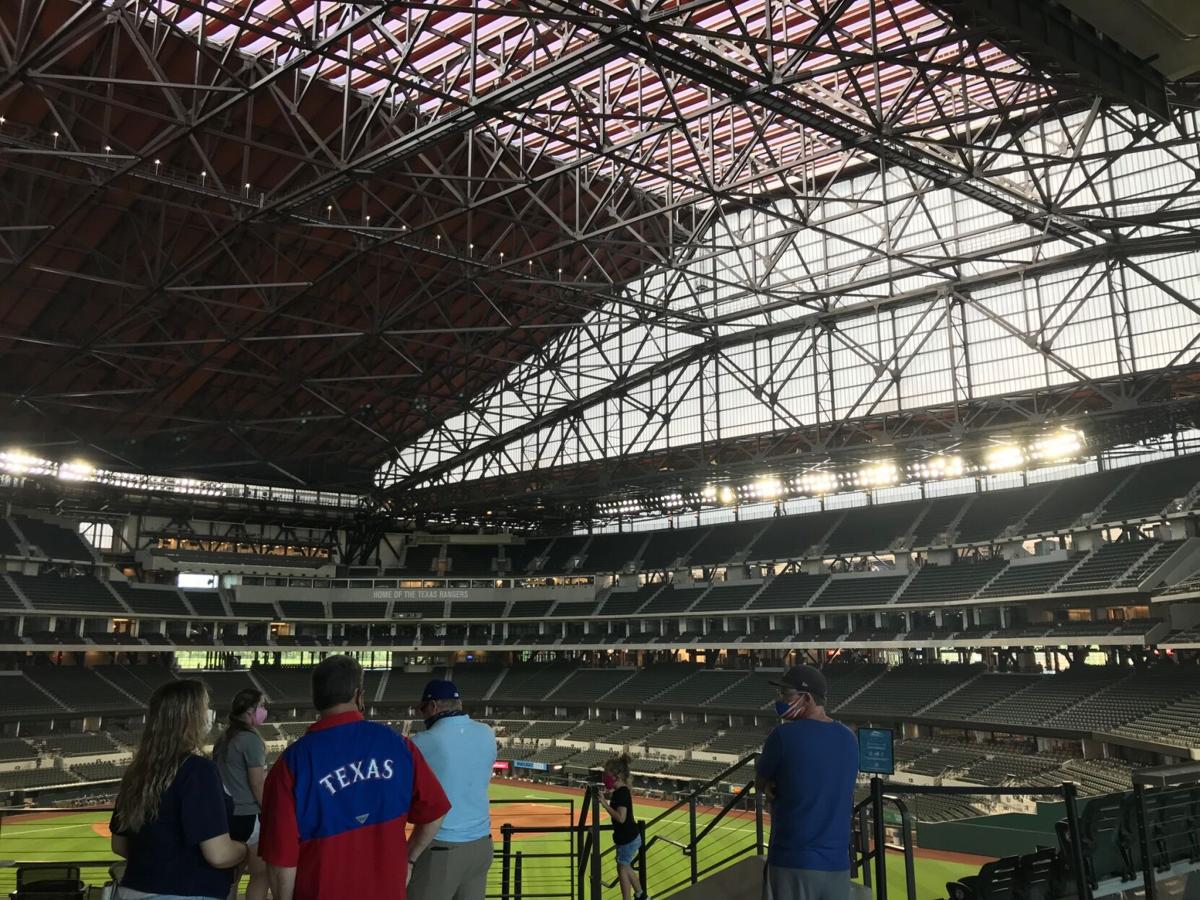 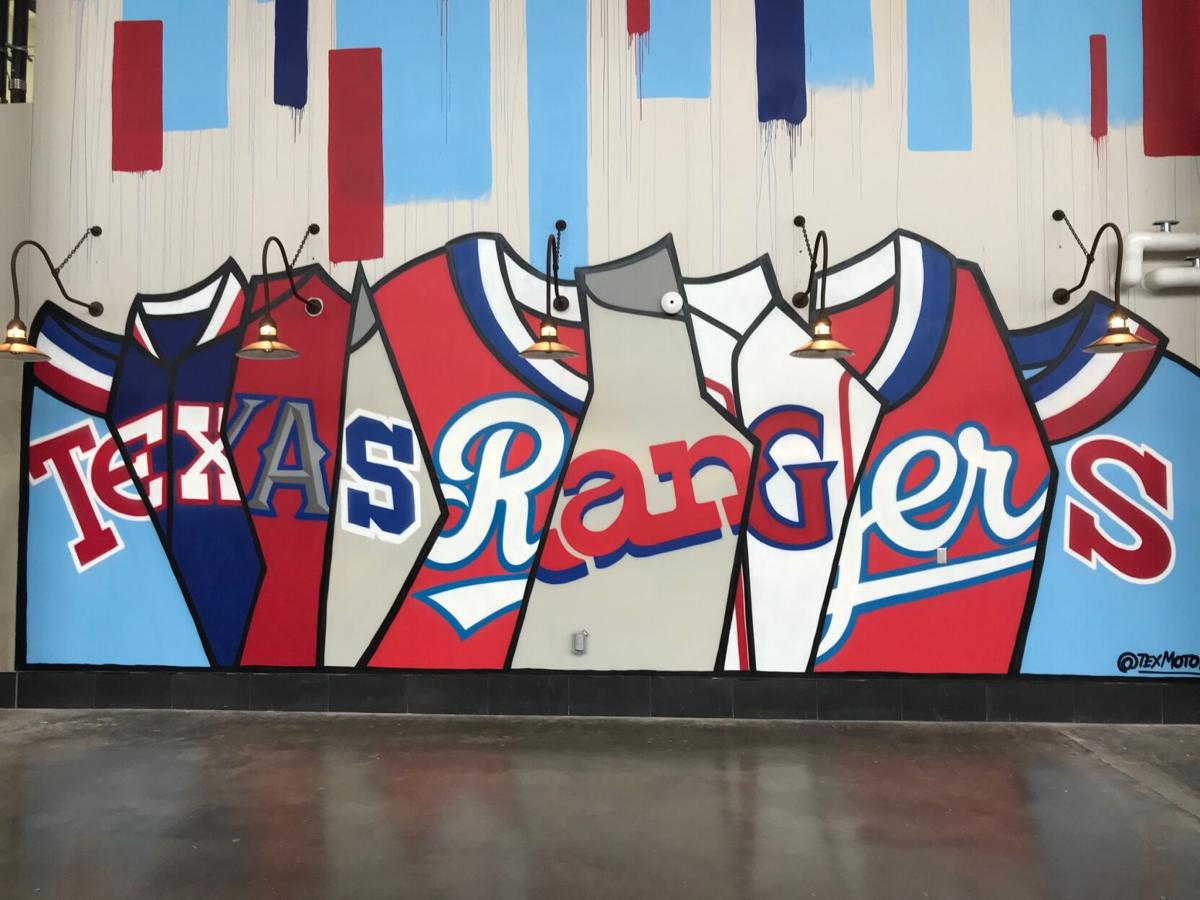 A look of the Rangers uniforms through the years at Globe Life Park in Arlington. 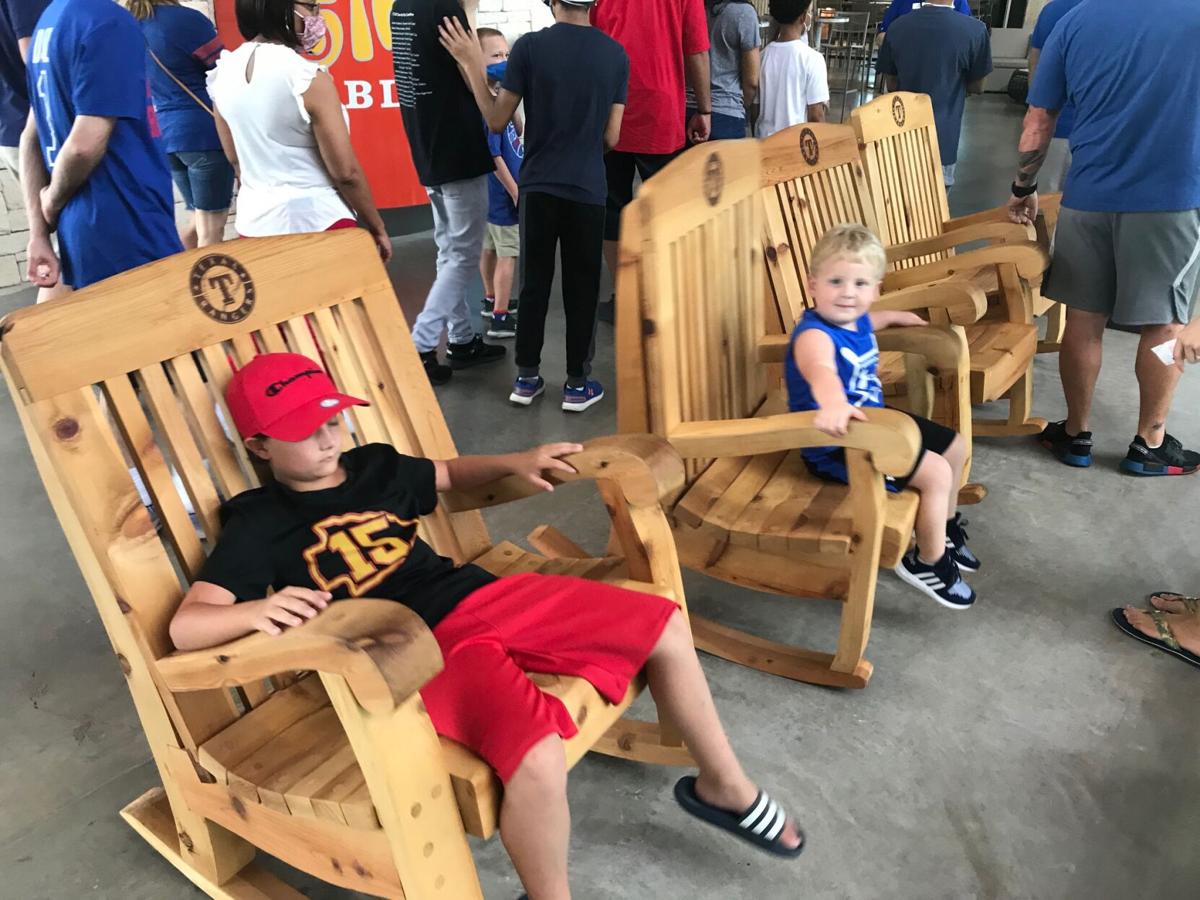 Down the left field line on the top concourse, there are rocking chairs that are first come, first serve. You can order a food or beverage item from Karbach Brewery and relax in the chairs as Lindale’s Dylan Brown (left) and Jayse Brown (right) rock away at Globe Life Field in Arlington. 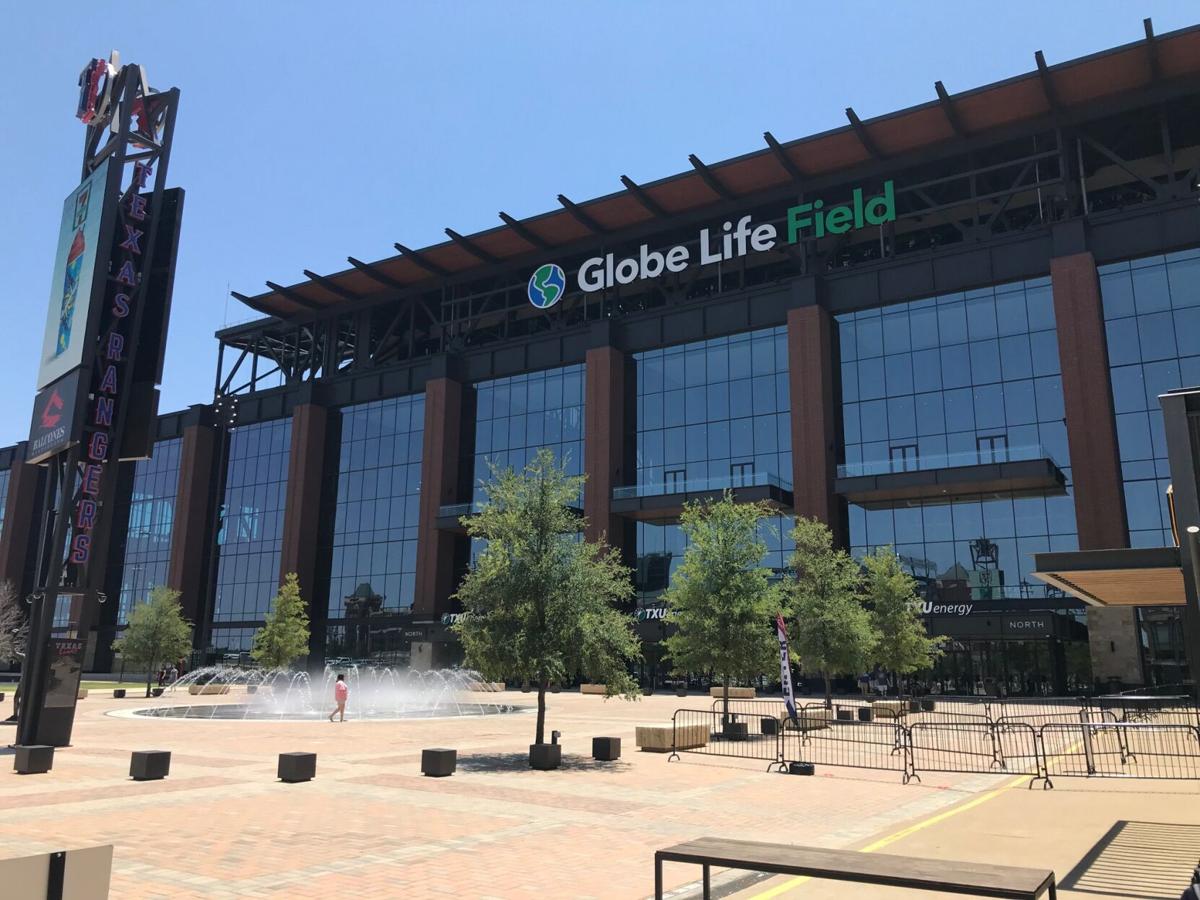 A view of Globe Life Field, home of the Texas Rangers, in Arlington. 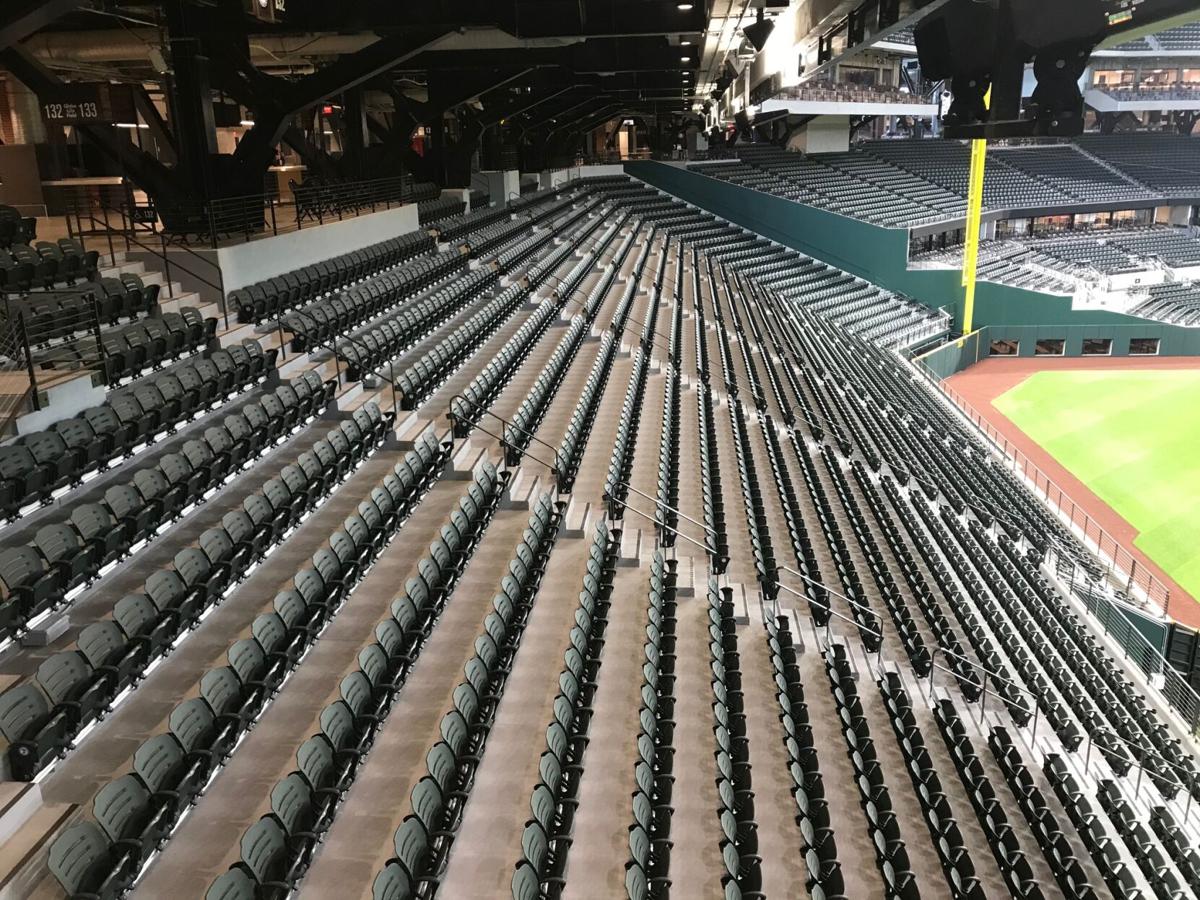 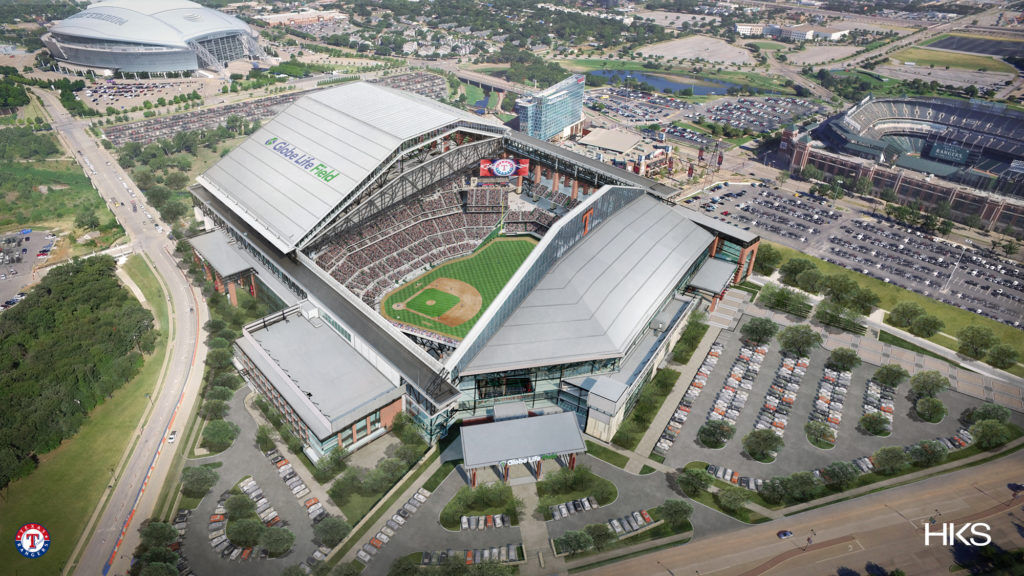 A look of the Rangers uniforms through the years at Globe Life Park in Arlington.

Down the left field line on the top concourse, there are rocking chairs that are first come, first serve. You can order a food or beverage item from Karbach Brewery and relax in the chairs as Lindale’s Dylan Brown (left) and Jayse Brown (right) rock away at Globe Life Field in Arlington.

A view of Globe Life Field, home of the Texas Rangers, in Arlington.

ARLINGTON — The old saying, you can’t judge a book by its cover, would apply to the new Texas Rangers ballpark.

While the $1.2 billion Globe Life Field does not have the beautiful architecture of the adjacent Globe Life Park (or as I still call it, The Ballpark), the inside climate-controlled new structure more than makes up for the exterior.

With a retractable roof, fans will not have to swelter through the brutal Texas summer they have experienced since the Rangers moved to the Metroplex from Washington in 1972.

The new field has a 5.5-acre retractable roof that features clear roof panels, allowing natural light into the ballpark when it is closed. When the roof is open, it is docked behind the third base grandstand. When closed, the temperatures will be in the mid-70s. It is the largest single-panel operable roof in the world and weighs 24 million pounds.

The concourses are much wider than the The Ballpark and although the new park is much larger than the old park (Globe Life Field measures 1.8 million square feet, 400,000 square feet more than Globe Life Park), the capacity is less, about 40,300. The old park could seat up to 48,000, including a record 52,419 for the first World Series home game in Rangers’ history on Oct. 30, 2010.

In the north concourse brick arches are present, reminiscent of the exterior of Globe Life Park.

The Rangers’ first scheduled regular season game at the new stadium is Thursday, July 24 against the Colorado Rockies.

Rangers officials are hopeful in the future fans will be able to attend games for the shortened 60-game regular season. For now, only team members are allowed for games due to the COVID-19 pandemic.

Along with the field, there is an entertainment area called Texas Live! with restaurants and bars. It includes Arlington Backyard, a venue for concerts. It also includes Pudge’s Pizza, Troy’s Arlington and PBR Texas, along with shops. Nearby is the Live! By Loews hotel.

Tours are available of the new field. Tickets are $25 (adults), $22 (seniors, military, first responders), $15 (children ages 4-14) and free for children under 4. Tickets must be purchased in advance (texasrangers.com/tours) with a designated time.

The dimensions pay homage to Rangers’ history and key players.

Down the left field line it is 329 feet, honoring No. 29 and future Hall of Famer Adrián Beltré. Continuing around the outfield the dimensions include: left field just inside the line (334 feet for Hall of Famer No. 34 Nolan Ryan), left field power alley (372 feet for 1972, the first year for the club in Texas), right and left of center field (410 feet for No. 10 Michael Young), straightaway center field (407 feet for Hall of Famer No. 7 Ivan “Pudge” Rodriguez), right field power alley (374 feet for 1974, the Rangers’ first winning season in Texas), right field line (326 feet for manager and No. 26 Johnny Oates who led the Rangers to three American League West titles) and from home plate to the backstop (42 feet for No. 42, Hall of Famer Jackie Robinson who broke the color barrier in MLB).

The outfield walls are 8 feet in height from the left field foul pole to the right field foul pole. The batter’s eye structure in center field is 120 feet in length and 40 feet high.

The Rangers’ bullpen is in right field with the visiting bullpen in left field. Texas’ dugout is on the first base side, and the visiting team utilizes the third base dugout.

Since the Rangers were the first team to sell nachos back in 1976, the club has always been at the forefront of ballpark treats.

Along with the standard ballpark fare, Golden Chick, Pluckers Wing Bar and Bahama Buck’s shaved ice will be served.

Down the left field line on the top concourse, there are rocking chairs that are first come, first serve. You can order a food or beverage item from “Karbach Brewery” and relax in the chairs.

Some of the new food includes:

The Rattler — Rattlesnake sausage on a hoagie roll, drizzled with Venom sauce;

Brisket Eggrolls — Created by a Rangers fan and winner of the fan vote from earlier this winter. Tender house smoked brisket, shredded and rolled up in a classic egg roll wrapper and deep fried. Served with fried rice and Sweet Baby Ray’s BBQ sauce for dipping;

Just like at the old park, there is an “All You Can Eat” section in right field between sections 233 and 237. Seats include unlimited grilled chicken sandwiches, hot dogs, nachos, burgers, peanuts, popcorn and soft drinks from the restaurant located on the First Base side of the Upper Concourse.

NOTES: Globe Life Field will feature a specially designed synthetic grass playing surface that was provided by Shaw Sports Turf with installation completed by Texas-based Paragon Sports Constructors. Instead of the tiny rubber balls that are used on many artificial surfaces, the Rangers’ field will use coconut husks. ... The street address is 734 Stadium Drive, Arlington 76011. ... At its highest point, Globe Life Field is 278 feet from the playing field to the top of the retractable roof. Each exterior side measures 785 by 815 feet. The park has six entry points, the Northwest, North, Northeast, Southeast, Southwest and VIP entry on the West side. ... There are 12 field suites located directly behind home plate as well as low-level club seating down both the first and third base lines. The park has 71 long-term Founders, Legacy and Classic Suites and 16 Party Suites that can accommodate from 30 to 420 individuals. The Lexus Home Plate Club, Evan Williams First Base Lounge, Germania Third Baseball Lounge, Balcones Speakeasy and Stubhub Club provide numerous food and beverage options for premium seat holders. ... Seats in all levels at Globe Life Field measure at least 19 inches in width as compared to 18 inches in Globe Life Park. ... Alba’s OldCastle Building Envelope provided the Curtainwall System (an outer covering of a building in which the outer walls are non-structural, utilized only to keep the weather out and the occupants in) for the park. ... Sports and entertainment design firm HKS was the architect for Globe Life Field. HKS, which has its main headquarters in Dallas, served as architect-of-record on then The Ballpark in Arlington (now Globe Life Park in Arlington), which opened in 1994. Manhattan Construction Company was the project’s General Contractor after previously serving in that role for The Ballpark in Arlington. Approximately 2,000 individuals worked nearly six million man hours to build Globe Life Field.