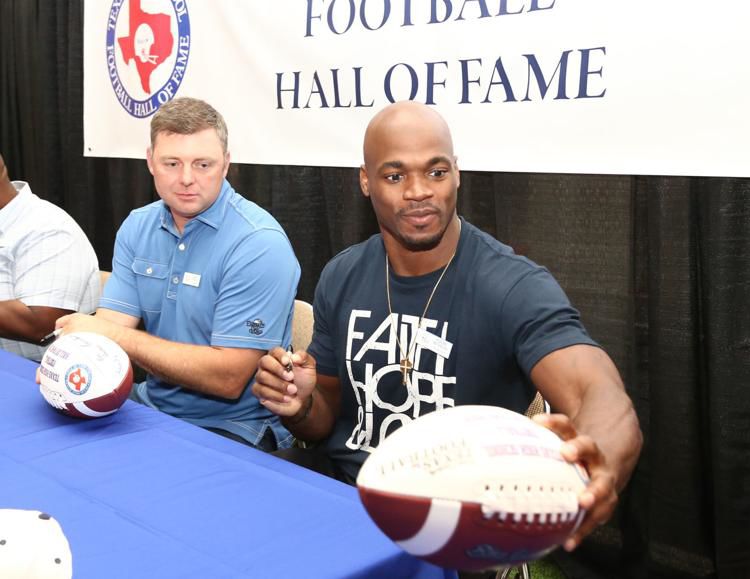 Palestine's Adrian Peterson hands over a football during a autograph session while sitting next to Stephenville’s Jason Bragg at the Texas High School Sports Hall of Fame induction ceremony on Saturday in Waco. 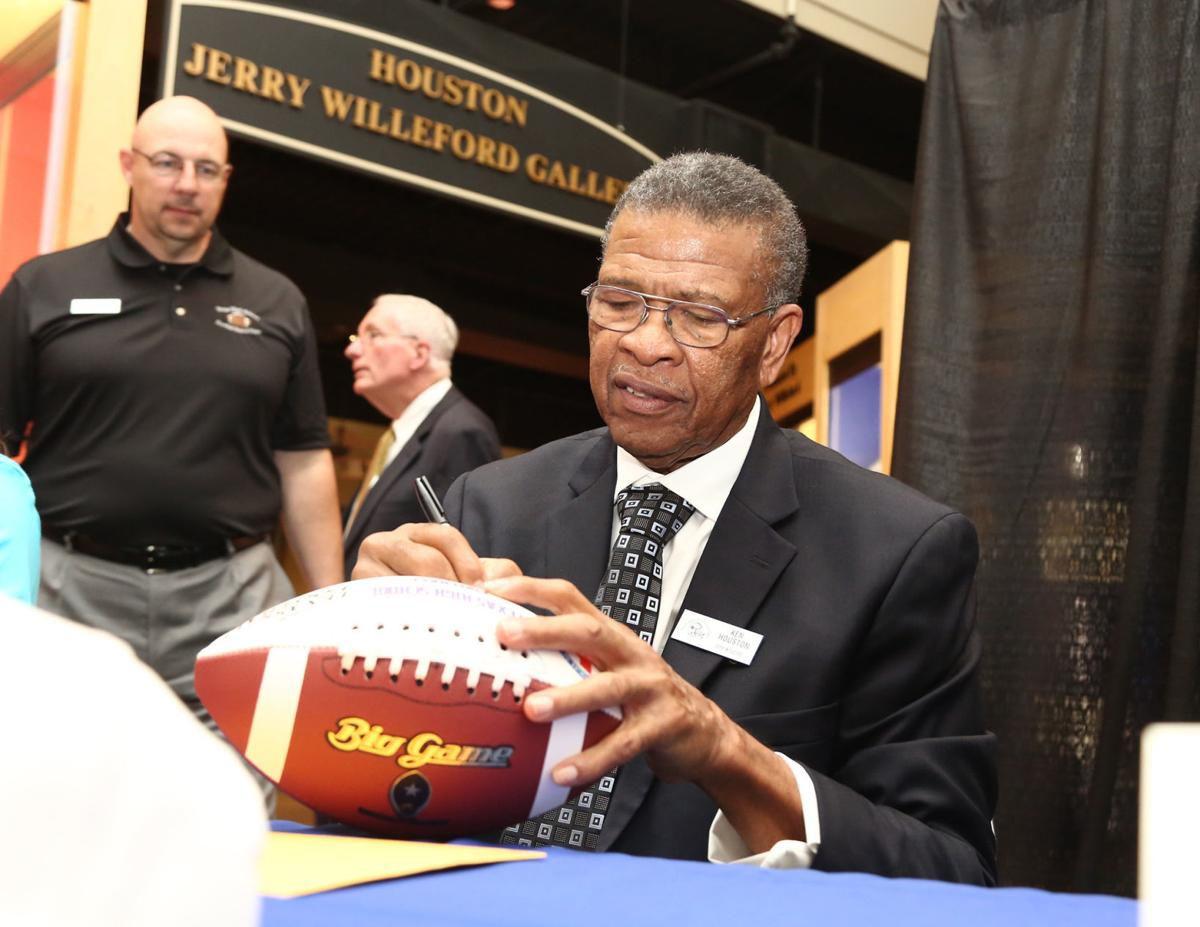 Ken Houston, a graduate of Lufkin Dunbar, autographs a football during a news conference at the Texas High School Football Hall of Fame on Saturday in Waco. 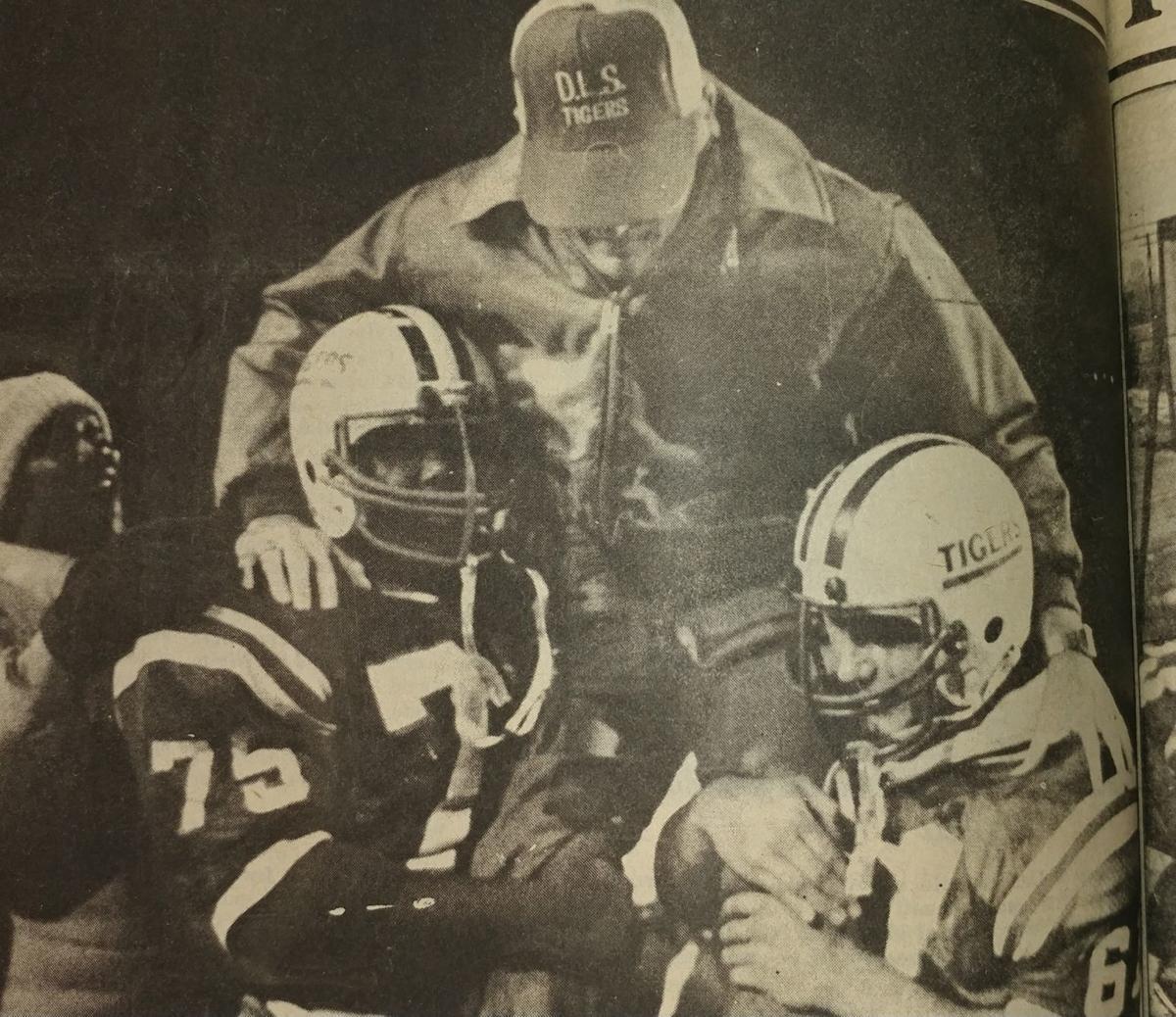 Palestine's Adrian Peterson hands over a football during a autograph session while sitting next to Stephenville’s Jason Bragg at the Texas High School Sports Hall of Fame induction ceremony on Saturday in Waco.

Ken Houston, a graduate of Lufkin Dunbar, autographs a football during a news conference at the Texas High School Football Hall of Fame on Saturday in Waco.

WACO — Every new class that enters the Texas High School Football Hall of Fame has a unique makeup and feel that’s defined by the individuals who are honored.

But they all have something in common, too. Each year the incoming class manages to reflect the grandeur of the history of Texas high school football.

The Class of 2019 was no exception as it included an active NFL star, a four-time state championship coach, another coach who was on the sideline for one of the most famous games in Lone Star State high school football lore, and a Pro Football Hall of Famer.

As the inductees gathered for a news conference and an autograph session at the Texas Sports Hall of Fame on Saturday afternoon, many of those in attendance were focused on Washington Redskins running back Adrian Peterson, the former Palestine High School star.

But Peterson was in awe of the moment.

“It’s really special for me,” Peterson said. “When I got the call that I was being inducted into the Texas High School Hall of Fame, I was smiling ear to ear. It’s such a big accomplishment being from Texas and just knowing the history of Texas football.”

The Texas High School Football Hall of Fame annually inducts one player from each decade along with two Eddie Joseph Coaching Award inductees and a special contributor. The 2019 class included Peterson of Palestine from the 2000s, Jason Bragg of Stephenville from the 1990s, Willie Everett of Daingerfield from the 1980s, Putt Choate of Coahoma from the 1970s, Ken Houston of Lufkin Dunbar from the 1960s, and Ken Casner of Waco High from the 1950s and before.

The Eddie Joseph Coaching Award winners were T.J. Mills of Sealy, and Scott Phillips of Groveton, Waxahachie and Plano East. TV executive Jon Heidtke was inducted as the Dave Campbell Contributor to the Game.

The banquet honoring the inductees was held Saturday night at the Ferrell Center. It’s annually a chance for former coaches and players and their family, friends and fans to gather and swap football stories.

“I’ve got a lot of people coming from Junction, my home town, a lot of my coaches that I haven’t seen in a long time, they’re going to be here tonight,” Phillips said. “It’s going to be like a family reunion for me and I’m excited about that.”

Phillips is most commonly remembered for his Plano East team’s third-round playoff game against John Tyler in 1994. That’s when the Panthers erased JT’s 41-17 lead in the final three minutes of the fourth quarter. Plano East went ahead 44-41 only the see the Lions' Rod Dunn return a kickoff for a touchdown in the final 20 seconds and walk away with the victory.

“That’s the one everybody wants to talk about,” Phillips said. “That’s the one I’m famous for losing. But the comeback was great. Our kids never gave up, never quit. It was a tremendous game.”

The game Phillips enjoys talking about most was his Waxahachie team’s 4A state championship in 1992.

“My son was a senior on the team and we drove 82 yards at the end of the game to take the 28-24 lead and then we went for it on fourth-and-two on our own 48-yard line to seal the deal,” Phillips said. “And I got to hand the 4A state championship trophy to my son.”

That junior season made Peterson a star and one of the most heavily recruited players in the country. He backed up all the hype by rushing for 2,960 yards and 32 touchdowns as a senior.

Peterson rushed for 4,041 yards in three seasons at Oklahoma, despite the fact that his junior campaign was limited by injury.

His NFL career has been an extended study in perseverance. Peterson came back from a knee injury near the end of the 2011 season to rush for a career-high 2,097 yards in 2012.

To this day, more than 35 years later, the 1983 Daingerfield team is still spoken about with reverential tones in East Texas.

The ’83 Tigers took a proud, tradition-wealthy program to another level. Not only did Daingerfield go undefeated on its way to a state championship that year, but the Tigers absolutely overwhelmed teams with one of the most dominant defenses in Texas schoolboy history, holding 16 opponents to a total of eight points. Yes, eight points — on the season.

So, when Willie Everett received the call that he was going to be inducted into the Texas High School Hall of Fame, thus becoming the first member of the ’83 Daingerfield squad to reach that honor, he was a little blown away.

“To be honest, I was kind of elated and happy just to be nominated,” Everett said. “That was a huge honor in itself. Just to be part of that team was special. I played from ’83 to ’85, and that was an amazing group of athletes.”

How does a bunch of 16 to 18-year-old kids become that powerful a force on the football field? Well, for Daingerfield, it all started in practice, where head coach Dennis Alexander demanded maximum effort.

“Our practices were just as intense as the games,” Everett said. “It just sort of became second nature. When you practice against the best, the games become pretty easy. … We never looked at it as a job, it was just fun.”

Everett played offensive tackle for the Tigers, and even though that 1983 team, with its 14 shutouts, gets most remembered for its defense, the team knew its way to the end zone, too. They averaged just under 40 points a game in that 1983 season, and Willie was one of five players to be named all-state that year.

Daingerfield reached the state final a second straight year in 1984, losing to Medina Valley in an upset in the title game. Then in ‘85, Everett was the district MVP and all-state again, as the Tigers completed a second undefeated state championship season in three years.

He signed with Tyler Junior College in order “to get acclimated to college,” he said. After one year at TJC, he moved on to Baylor, choosing his cousin Thomas’s Bears over an offer from Eric’s Texas Tech Red Raiders partially because Baylor was closer to home.

“We had 21 from the ’83 team go on to play Division I football,” he said. “It’s just surreal to think about. We were the first Daingerfield teams to ever go to state back-to-back. But we didn’t think about those honors at the time. We just loved to play football. We’d go out and win, then get up the next day, go fishing, do our chores, and then go out and win again.”

At a recent NFL event in New Jersey, Ken Houston found himself sitting next to his friend “Mean” Joe Greene. Houston was wearing the Pro Football Hall of Fame ring he received as an inductee in 1986.

Greene has also been enshrined in Canton, but on this occasion he was wearing a different ring, and Houston leaned over to get a closer look at it.

The jewelry acquisition in question is a ring representing induction to the Texas High School Football Hall of Fame. Though Houston, 74, has accumulated enough football honors in his life to open up his own personal Fort Knox, he considers this one as special as any of the rest.

“It means an awful lot,” Houston said. “Each one is different, they all have different expectations from the group which set them up. Anytime a group or a Hall of Fame chooses to honor you, you can’t help but feel very excited.”

Houston grew up playing every sport imaginable in his hometown of Lufkin, and even was a competitive swimmer. The school system was segregated at the time, and by the time he was old enough for high school, he enrolled at Dunbar, the school for African-American students.

There, he met a man who laid a firm foundation for his life ahead in Elmer Redd, Dunbar’s head football coach.

“When I look back at it, I wasn’t the first guy who was drafted to play pro ball. I think we had five other guys from Lufkin at the time who went on to play pro ball,” Houston said. “But we didn’t look at ourselves as future pro players. We just looked at ourselves as a good team who worked hard. That was the expectation set by Coach Redd.”

Coach Redd preached discipline, a message that continually echoed in Houston’s eardrums, as he also heard it at home.

“Back then, a lot of parents still had control over their kids,” he said. “I remember coming home sometime on a game day and my mom telling me to get some rest, so I actually got in bed at 4:30. At 5 o’clock, Coach Redd brought the bus by and talked to my mom, so that I could join the team to play that night. The approach was just totally different than what you might see today.”

“We had a guy, Wiley Smith, who was really, really good, and he was the guy Prairie View was after,” Houston said. “They ended up signing me, too.”

Under the leadership of head coach Billy Nicks, Houston developed into one of the nation’s top defenders. He also ran track and competed on the swim team all four years at Prairie View.

The nearby Houston Oilers selected Houston in the ninth round of the 1967 NFL Draft. Houston was glad to get a chance to play, but he also set out to prove that he was just as good a player as any of the first rounders.

“That was the biggest thrill for me, trying to see, ‘What does No. 1 look like? Who is that person?’” Houston said. “Because I wanted to be just as good, if not better. Another person might be smarter than me, they might be bigger or stronger, but I was out to prove that they weren’t better.”

Still, Houston’s desire to prove himself on the field didn’t consume his every waking thought. In fact, he also carried a dream to be a teacher, and said that he took only half of his $14,000 rookie salary as he missed some of camp to moonlight in education.

As a safety, Houston showed an instinctive knack for knowing where the ball was headed. He intercepted 49 passes in his 13-year career, which included 12 trips to the Pro Bowl. Houston also recovered 21 fumbles.

Houston is a member of both the Oilers/Tennessee Titans Ring of Honor as well as the Washington Redskins Ring of Fame. He was named to the NFL’s 75th Anniversary All-Time Team, the league’s All-Decade Team for the 1970s, and in 2009 he was named to the UIL’s All-Century Team for his high school exploits back at Lufkin Dunbar.