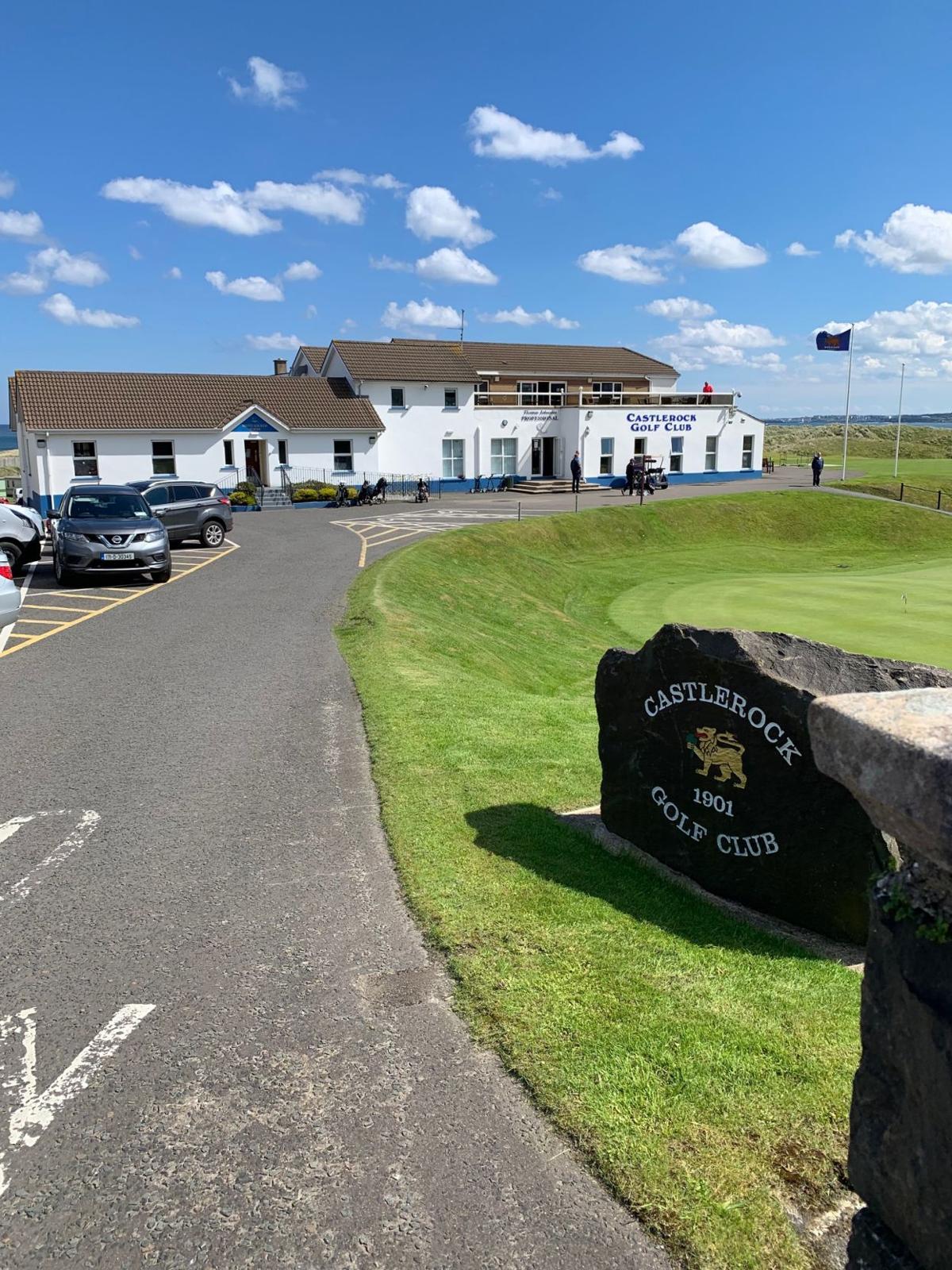 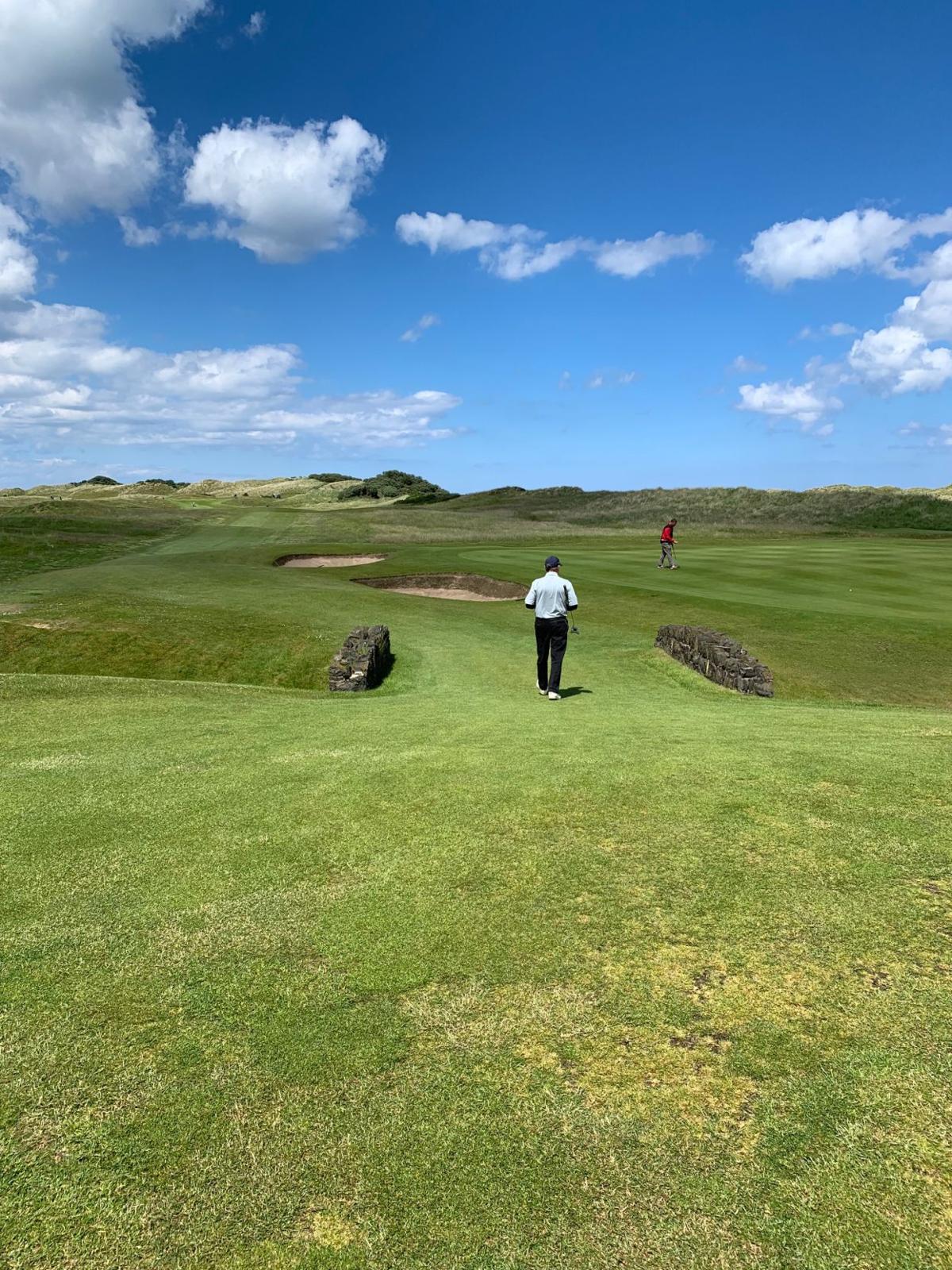 Pat Wheeler/CorrespondentRandy King of Texarkana walks to the green at Castlerock Golf Club in Northern Ireland.

Pat Wheeler/CorrespondentRandy King of Texarkana walks to the green at Castlerock Golf Club in Northern Ireland.

CASTLEROCK, Northern Ireland — An exhausted “Merry Band” of golfers, the Texans, played their final round of the Causeway Coast Amateur at one of the best courses in Northern Ireland that many have never heard about or played — Castlerock Golf Club.

Located along the northern coast of Ireland, it is close to Portrush and will no doubt be better known in a month when many golf fans in the area for the 148th Open Championship at Royal Portrush venture over and play this delightfully pure links course. It is not long but quite challenging with a variety of holes that makes it one of those courses one would never tire of playing day in and day out.

Friday’s round was a great final day of play with pleasant weather and the course was in superb condition. All of us played decently and enjoyed continuing our new friendships with golfers from Wales, England and Ireland.

After the round we had a final dinner while watching the Canadian Open live on television in the grill and joking with our Irish friends. It was great “craic” as the Irish call conversation, citing an old Gaelic word. We were tired but happy, celebrating the perfect ending of a golfing excursion that included seven rounds in seven days for a total of 117 holes played. And I am proud to say all of those holes were walked. We began with nine holes at Bushfoot the day we arrived last Saturday the first of June. That round was primarily to get us to stay up and thus get on local time and over our jet lag. Then we played 18-hole rounds at Ballycastle (two times), Northwest, Ballyliffin, Gracehill and finally Castlerock.

Randy King of Texarkana, our long ball specialist, prevailed as the best of our lot, posting 26 points Friday for a weekly total of 115. He finished 104th out of the 280 golfers in the field but wowed our new friends from across the pond with his prodigious length. King can send his drives over 300 yards but often functions best with his 240 yard 3-iron shots. Some of us marveled that he still uses a 3-iron since most have gone to the hybrid clubs once past the 5-iron.

King plays off of a 10-handicap at Texarkana Country Club and enjoyed his first trip to Ireland.

“I just had a wonderful time playing golf and meeting new people,” King said. “I definitely hope to come back for another crack at links golf. It is so different from what we play at home but I thought it was a lot of fun.”

My friends Howie Alexander and George Rowe, like me, have played in Northern Ireland on many occasions. This was my eighth trip over for the Causeway Coast Amateur but Alexander has played in 10 while Rowe is not sure but thinks at least five times.

Alexander totalled 107 points to my 106 while Rowe had 98. But Alexander, Rowe and King did more totalling than just their golf scores. Alexander detailed his walking mileage at roughly 7 miles per day so that all of us walked about 50 miles for our seven days of golf.

Actually we played 117 holes and it was on about the 110th hole that I think I finally solved the riddle of my poor golf. I played the final eight holes with five pars and a bogey, hitting six of the greens in regulation. I realized I was taking the club away too much to the inside and began to focus on taking it back straighter and the result was solid and straight hits. I hope this remedy proves to be permanent because it really does not necessitate an altered swing movement.

Competing for amateurs, unless at a top level, is always challenging and all of us had our ups and downs. King said he went through every possible swing thought he could think of while Rowe battled with his swing but fought through it to post some good scores and end on a positive note at Ballycastle and Castlerock.

Alexander was thrilled to play well only six months after major heart surgery and certainly the walking is good for his continued recovery.

The cultural experiences made the trip so much fun. We marveled at how a local foursome devoured mussels at the restaurant along the coast on Thursday night and then found several places where the food was delicious, including the grill at Castlerock.

Our last bit of business was checking out of the bed and breakfast, the Red Sails, where we were pampered by the manager Angela Kearns. The breakfasts were made to order and helped sustain us until dinner with only water and snacks the fuel while playing the four-hour rounds of golf.

We didn’t do much other than play golf with one day dedicated to walking the streets of downtown Portrush to “post a letter” and visit the Turkish barbers. Alexander and I will arrive back in Texas much better groomed than when we left. We visited the “chemist”, aka the pharmacist for more over-the-counter remedies for our aches and pains.

It was easy to hang out with our group because we are in it for the golf and the friendship and the laughs and smiles and chance to walk about in nature and appreciate our good fortune. And that includes reveling in the amazing beauty of the Antrim Coast of Northern Ireland. I will put it up against any other meeting of land and sea and that includes our gorgeous Monterey Peninsula in Northern California. To play golf in such a setting is pure joy and it was important for me to soak it in as much as I could because I know I may never be back this way though I hope to come again soon.

Of course we were rained on but only a couple of times and not too badly. A trip to Ireland without some rain would be disappointing.