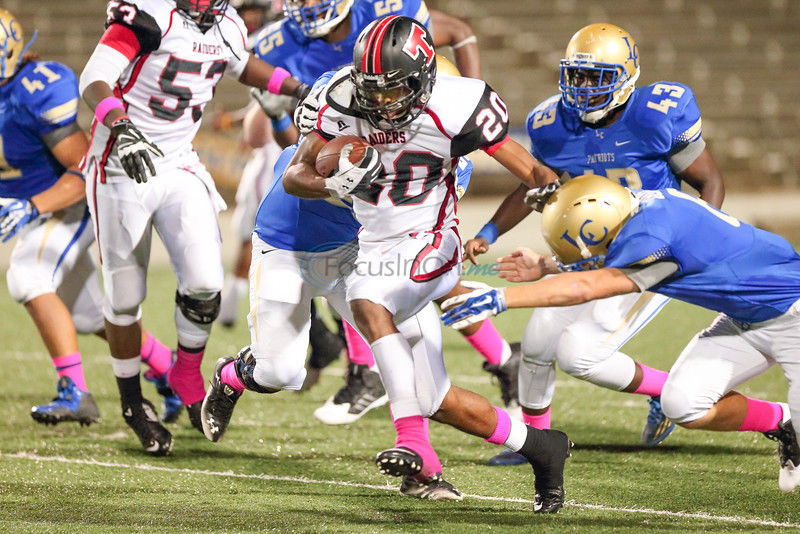 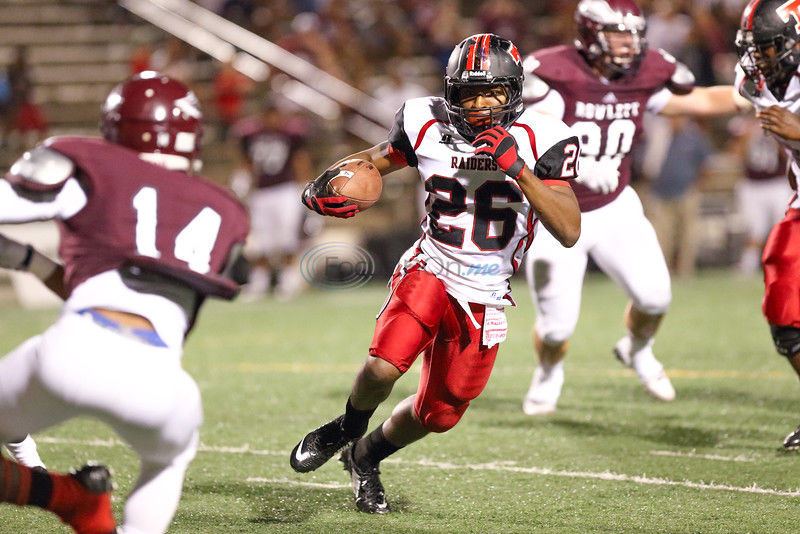 Robert E. Lee junior Tavon Wesley cuts back for a big run against Rowlett in a game played earlier this season. Wesley is coming off a 100-yard effort last week against Lakeview Centennial. (Lang White | Correspondent/File)

Robert E. Lee junior Tavon Wesley cuts back for a big run against Rowlett in a game played earlier this season. Wesley is coming off a 100-yard effort last week against Lakeview Centennial. (Lang White | Correspondent/File)

The rains came minutes after Robert E. Lee's victory Friday against Garland Lakeview Centennial, but there was plenty of thunder and lightning during the game.

The Red Raiders rolled up 328 yards of rushing and five touchdowns on the ground, with nearly all of it coming in the first three quarters, before giving way to the second unit in the fourth quarter of a 41-21 victory.

Junior tailbacks Tavon Wesley and Devonte Craver made sure Lakeview Centennial knew a storm was coming.

Wesley, aka Thunder, churned out 109 yards on 11 carries.

Craver, aka Lightning, finished with 84 yards on 11 carries and scored two touchdowns.

"Tavon likes to use his strength and skill and really read (his blocks). Devonte is just a slasher," Lee backs coach Randy Barnes said. "Tavon is steady, steady, steady and then Devonte gets in there and ‘Boom!' with a burst that a lot of teams (are not ready for)."

That is exactly what happened against Lakeview Centennial. Wesley played REL's first two series and was a big contributor in Lee's opening touchdown with 15- and 17-yard runs sandwiched between two, 3-yard blasts.

Lakeview Centennial stiffened on REL's next drive, understanding Wesley's tendencies and was able to stop the 6-1, 190-pound back for no gain and force a punt.

On Lee's third possession, the Red Raiders unleashed Craver. His first two carries went for 10 and 15 yards. Then one teammate tagged the other and it was now Wesley's turn to get the hard yards on a bruising 11-yard run, and muscle for 4 yards on another carry.

It was finally capped by Craver racing into the end zone for the first of his two touchdowns.

That back-and-forth production continued for the rest of the game as REL converted eight of nine third downs in the first three quarters, with Craver and Wesley taking care of most of them.

"You get people that have to key on one guy and it makes it pretty easy, but if you give them two different types of runners, then good things happen," Barnes said.

Added Lee head coach Darrell Piske, "They are both good runners with good vision, and it's nice to have two of them so we always have fresh legs. They can also catch out of the backfield."

Wesley is in his second year in the Lee backfield after starting as a sophomore in 2013 and finishing with 718 yards and eight touchdowns. He enters Friday's game against Garland with 63 carries for 387 yards and three scores.

"Last year I was just a newcomer and trying to make plays and help the team out any way I could," Wesley said. "This year I know what they expect of me. I know what it takes to make things happen."

Wesley struggled to follow up last year's promise early on this season, totaling 20 yards on 11 carries against Keller Fossil Ridge and 62 on 13 rushes at Lufkin — both games finishing as losses.

In REL's third game against top-ranked John Tyler, Wesley broke out with 103 yards and a touchdown. It snapped a five-game stretch dating to last season where Wesley failed to surpass the century mark. Thus far in three district games, Wesley has 267 total yards with two touchdowns.

"The first thing I look for (is my blockers) and look for a cut and then just go," Wesley said. "When I don't have the ball, I am looking to (blast) somebody on a block."

Craver provided a few fleeting glimpses of his potential in REL's opening two games, but still only had 46 total yards before one play against JT changed everything. Needing to either run the clock down and play overtime or try to get yardage late for a game-winning field goal, REL handed it to Craver on third-and-2 from its own 35.

The junior raced through a gap in the line and did not stop until he was at JT's 5 following a 60-yard run. He later scored the game-winning touchdown.

He enters Friday's game averaging 6.7 yards per carry and has 10 carries of 10 yards or more in REL's three district games.

"I am just trying to play my hardest and give everything I've got," said Craver, who has 342 yards and four touchdowns on 51 carries. "I just want to go as soon as I get the ball. If there is a hole, I will run through it, but if not (I am going to try and make a crease)."

The Red Raiders are now 3-3 overall and 2-1 in District 11-6A, the best record REL has had at this point in the season since 2009. Garland is giving up an average of 222 yards rushing in its three district games.

Lee will move one more win away from clinching a playoff spot if Wesley, Craver and Co. can take care of Garland on "Senior Night."

"I feel we've come together as a team and we are depending on each other to make plays," Wesley said.

Added Craver, "The coaches are just challenging the whole team to work hard. … We can do something that hasn't been done in a long time around here."

Raider Rap: Presale tickets for Friday's Garland vs. Lee game at Trinity Mother Frances Rose Stadium are $3 (students) and $5 (adults). Reserved seating is $7. Tickets may be purchased at the Tyler ISD Athletic Office at Plyler Complex, 807 W. Glenwood, today and Thursday, from 8 a.m. to 4 p.m., and on Friday from 8 a.m. to 1:30 p.m. You also can purchase at Tyler Athletics, 5520 Old Jacksonville Highway. Tickets at the gate are $6 for general admission and $8 for reserved.