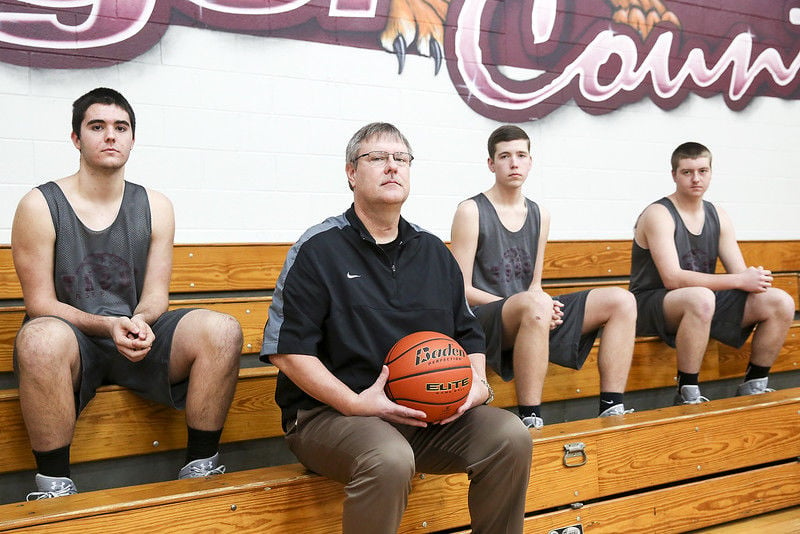 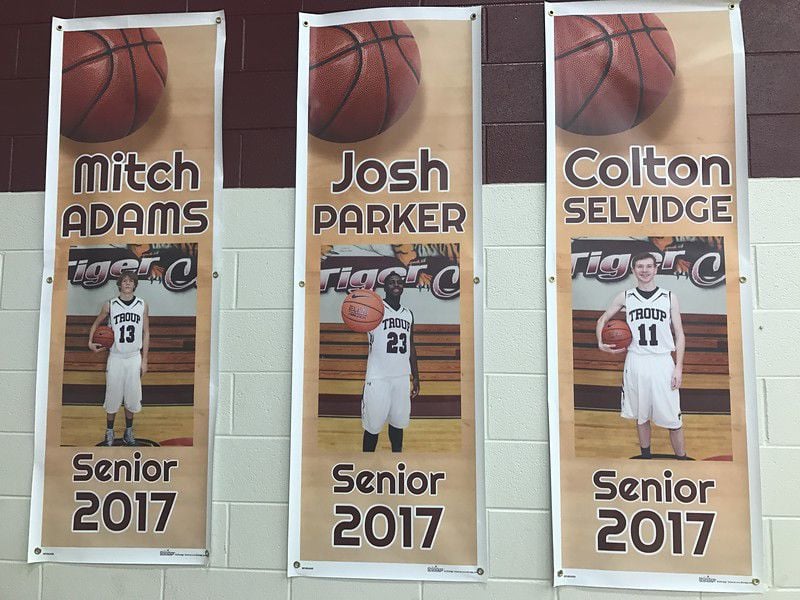 PHIL HICKS/Staff THE DISTRICT 15-3A CHAMPION Troup Tigers have three seniors on their squad. Banners of the seniors hang in the Tigers’ gymnasium - (from left) forward Mitch Adams, forward Josh Parker, a transfer from John Tyler High School, and forward Colton Selvidge. 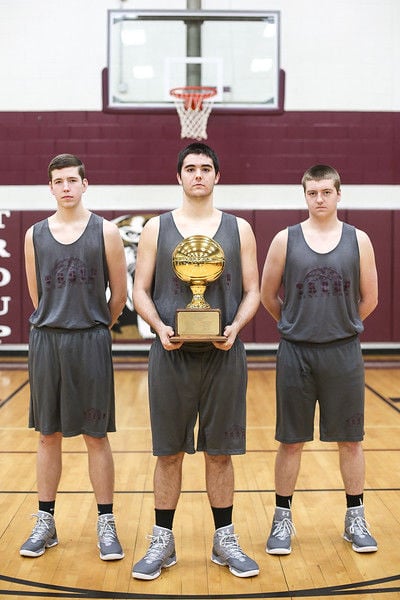 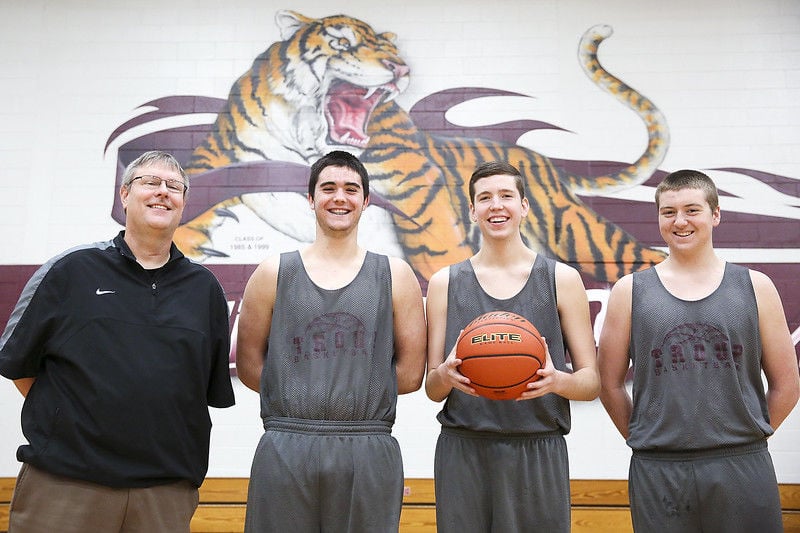 PHIL HICKS/Staff THE DISTRICT 15-3A CHAMPION Troup Tigers have three seniors on their squad. Banners of the seniors hang in the Tigers’ gymnasium - (from left) forward Mitch Adams, forward Josh Parker, a transfer from John Tyler High School, and forward Colton Selvidge.

TROUP - Darin Harley readily admits he's not into Twitter, Instagram or any of the millennials' forms of communication.

"I had to ask my sons, what's a hashtag?" said the first-year Troup High School basketball coach.

His sons - Seth, Christian and Caleb - turned him on to Twitter and he had another motivational tool.

Harley knew he wanted to create some new excitement about the storied Troup program.

So Harley came up with the hashtag #BuildingRome. When there is a rare loss, he uses #Romewasn'tbuiltinaday.

With hard work and a new attitude, Troup is back on top, winning the District 15-3A championship with a 10-2 record. Overall, the squad is 24-7.

The Tigers open the playoffs with a bi-distict playoff against Elysian Fields at 6 p.m. Tuesday at Kilgore High School.

Harley was a three-year member of the Troup basketball teams in the 1980s under East Texas coaching icon Mike Thomas, who is now retired on his farm near Douglass. Later, Gerald Anthony and Leland Hand continued the foundation that Thomas laid and took it to new heights, including multiple state titles and state tournament trips.

"What really makes me happy is seeing some of the old-timers smiling when they come to the basketball games," said Harley, Class of 1985 and graduate of The University of Texas at Tyler. "I know how much basketball means to this town."

Also, he is seeing some of the former players attending.

"Tony Kincade and Greg Austin told me when they were in middle school they would watch our teams. Now, there are youngsters watching this team and wanting to be on the Tigers basketball team," he added.

Although Harley couldn't coach the Tigers during summer league, his sons Christian and Caleb took the courts at UT Tyler and New Summerfield High School to lead the Tigers.

Jared Jackson, a junior guard, said Harley's sons were like an extension of coach Harley. "It allowed us to see coach Harley's technique and coaching style," said Jackson, a 3-point sharp-shooter.

Added Shane Thomas, a junior post, "Coach Harley brought an immediate different vibe to the program. He knew about the great Troup teams of the past."

Junior small forward Jones Ard said the team wanted to return to the tradition of the Troup teams of old.

Harley said half the team is in the National Honor Society with Ard currently ranked No. 1 in the junior class.

This is actually Harley's second tenure as a coach at his alma mater. He was a middle school coach in the mid-1990s in Troup.

The journey back to Troup took a winding road.

With his wife, Shelly, continuing her studies of anesthesiology at Texas Wesleyan University, Harley took a map and made a circle of a 30-mile radius around Fort Worth for an area to look for a coaching job.

He saw Gorman High School in West Texas had an opening for a basketball coach. With his wife waiting in the car for three hours, he was grilled about the 4-3 defense in football.

"When the interview was finished, they asked if I wanted to be defensive coordinator on the football team," Harley said. "I asked about the basketball job because that was what I was interested in. They said ‘oh, you can have that too if you want.'"

So that's how his basketball head coaching career began. Then, he was coaching at Norman High School in Norman, Oklahoma, for three years and, "I had to follow the bread-winner in the family when my wife got a job near Orange."

He went to Little Cypress-Mauriceville High School for 14 years where he was head coach for 11 seasons.

Just as when he was at Gorman, where Brock and Ponder were powerhouses, Harley had to deal with such schools as Beaumont Ozen, Beaumont Central, Port Arthur Memorial and Hardin-Jefferson. Still, his squads made the playoffs seven times in 11 seasons in Orange.

That's where he decided to use the 1-3-1 zone because his clubs were always "out-athleted" by the Beaumont area schools.

With their youngest son, Caleb, heading to college - he is now a junior at the University of Oklahoma, the Harleys decided to come back to East Texas and he got out of the coaching business. Seth (who played football at McNeese State and basketball at Lamar State-Port Arthur and later attended Lamar University) and Christian (University of North Texas graduate) are now teaching, so the Piney Woods called.

They settled in Bullard and his wife is a Certified Registered Nurse Anesthetists at ETMC-Jacksonville.

Then the Troup basketball position came open in May and his Troup buddies started calling him, urging him to apply for the job.

He's glad he got the job and he loves seeing the smiling faces in the gym again.

NOTES: Harley said the 1992 Class 2A state champion Troup team will be one of the honor teams this year at the UIL State Tournament in San Antonio. It is the 25th anniversary of that championship team. … The winner of the Troup vs. Elysian Fields game will play the winner of the Queen City vs. Prairiland game in the area round later in the week.