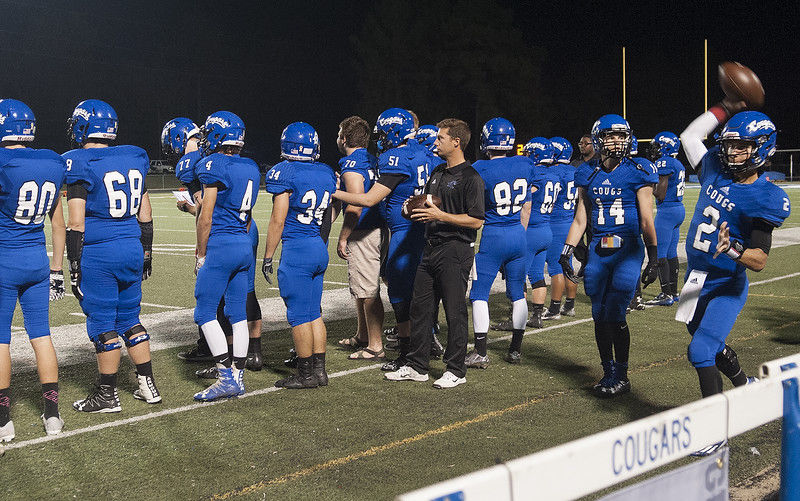 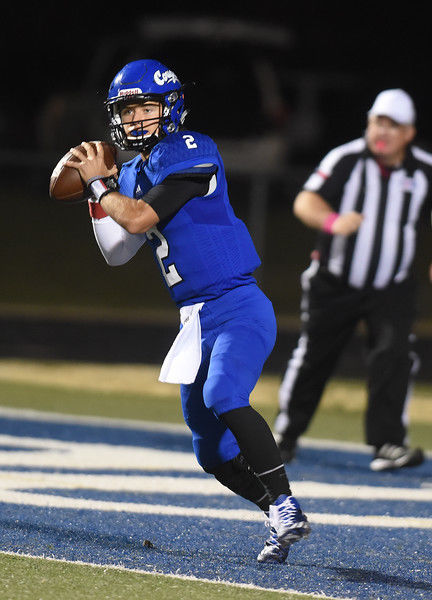 Grace Community School 's Christopher Wilhelmi looks for a pass on the kick off return Friday night as they play Bishop Gorman at home. (Sarah A. Miller/Tyler Morning Telegraph)

Grace Community School 's Christopher Wilhelmi looks for a pass on the kick off return Friday night as they play Bishop Gorman at home. (Sarah A. Miller/Tyler Morning Telegraph)

By all accounts, Grace Community senior Christopher Wilhelmi had a great night on Friday.

The Cougars quarterback threw for 311 yards and ran for 134, accounting for six touchdowns in a win over rival Bishop Gorman.

To top it off, Wilhelmi was named the Built Ford Tough Texas High School Football Player of the Week for private schools.

"Just typical Chris," Grace coach Mike Maddox said. "Spreading the ball around, encouraging his teammates. Just being able to use his running skills as well as throwing. He had a big night."

Grace beat Gorman 56-27 to clinch home-field advantage in the first round of the TAPPS Division II playoffs.

Wilhelmi, who's been working back from an MCL injury, completed 13 of 19 passes for four touchdowns and rushed a season-high 13 times as he nears full health.

"He'll be the first to tell you it's a reflection on his offensive line, his receivers and his backs," Maddox said of the statewide honor. "It's a reflection defensively on getting stops and getting the ball back quickly and you can even throw special teams in there.

"He's the recipient but it's definitely a reflection on the entire team."

The Cougars held the Crusaders to seven second-half points and made a goal-line stand in the first half before driving 99 yards the other way to score.

"I thought that was a big turning point," Maddox said.

Grace travels south to face Bullard Brook Hill on Friday before returning to Clyde-Perkins Stadium for the first round of the playoffs next week.

GORMAN CLASS COULD BE PROGRAM'S WINNINGEST

To say Bishop Gorman's senior class struggled in middle school would be an understatement.

A couple more wins and the senior group will be the winningest in the nearly 60-year history of Gorman football. Their final home game is Friday against All Saints on Senior Night at McCallum Stadium.

"We owe a lot to this class," Gorman coach Coby Gipson said. "With that in mind we really want to send them out on a high note in their last game at McCallum Stadium."

Gorman is locked into the No. 3 seed from TAPPS D-II District 2 win or lose, but Gipson said the team would love to build some momentum heading into the playoffs, where they're likely to face Grapevine Faith Christian, though that could change.

The Crusaders also want to bounce back from their loss to rival Grace, a game Gipson thought turned on a few key plays, like the first-half goal-line stand by the Cougars.

Two quarterbacks went down to injury and All Saints fell behind 23-0 in the third quarter.

Nonetheless, the Trojans nearly were able to come from behind, pulling within 23-15 before Carrollton Prince of Peace held on for a 32-15 win thanks to a long scoring drive in the fourth quarter aided by a couple of fourth-down conversions.

"It was a good game; it was a hard-fought game," Trojans coach Drew Starnes said. "If we could've stopped them ... I think we'd have won the football game."

Though quarterbacks Tanner Towns and Garrett Brown both were able to return to the game after picking up knocks in the first half, the game was a microcosm of All Saints' season.

"I think it kind of embodies everything we've done all year," Starnes said. "Our team has experienced a ton of adversity through injuries. Our kids haven't been phased at all. Our kids keep fighting every quarter, every game, from beginning to end. That's what we're most proud of more than anything."

The Trojans will go for their first district win of the season against Bishop Gorman on Friday at McCallum Stadium, the same place All Saints began the season 11 weeks earlier.

BROOK HILL ALL BUT IN

Bullard Brook Hill's 52-35 win over Trinity Christian-Cedar Hill all but locked a spot in the playoffs for the Guard as the fourth-place team from the district.

Brook Hill is tied at 2-3 with TC-CH but with the head-to-head advantage.

Should the Guard lose at home to Grace on Senior Night at Herrington Stadium, the Tigers would need to knock off top-ranked and undefeated Dallas Christian in Mesquite to overtake Brook Hill.

Should both teams lose, that would create a three-way tie with Brook Hill, TC-CH and Carrollton Prince of Peace, which is playing out of district on Friday. Brook Hill and TC-CH have the better point differential between the three to make it a two-way race and then the Guard have the head-to-head win over the Tigers.