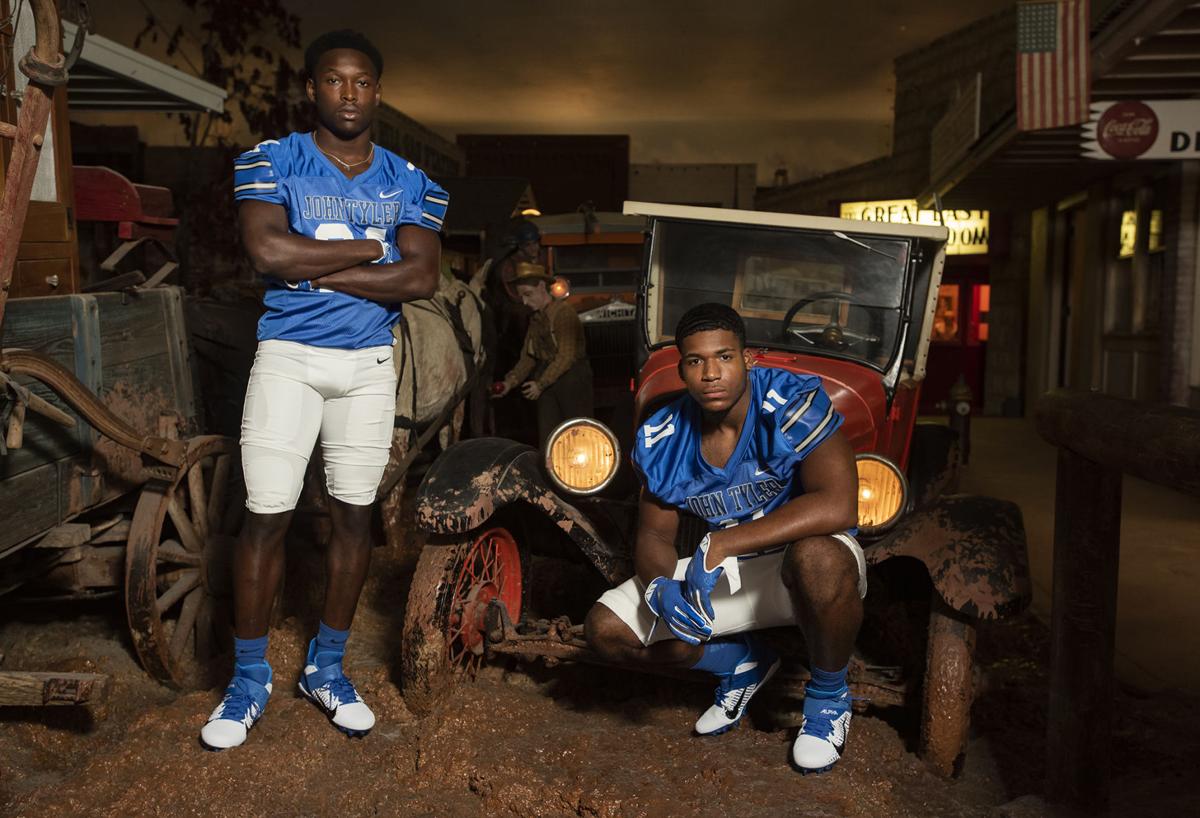 John seniors Kitan Crawford and Kameron Mayfield are shown during a preseason photo shoot at the East Texas Oil Museum in Kilgore.

John seniors Kitan Crawford and Kameron Mayfield are shown during a preseason photo shoot at the East Texas Oil Museum in Kilgore.

There are some 416 UIL football playoff games this weekend in Texas.

But the only one the John Tyler Lions and their fans are concerned with is their bi-district contest with the College Station Cougars on Friday.

Kickoff for the Class 5A Division I postseason game is scheduled for 7 p.m. at Cougar Field.

The winner of the JT-CS game will meet the winner of Frisco Lone Star and Mansfield Legacy next week in area.

Last year the Lions entered the playoffs on a six-game winning streak, eventually reaching the quarterfinals. This season JT begins the postseason on a three-game slide.

The Cougars, who won the Class 5A D-II title in 2017, lost two weeks ago to Tomball 42-35 before rallying to down Magnolia West 37-30 last week in College Station to earn their sixth straight playoff appearance. The Cougars trailed 27-8 at halftime before outscoring the Mustangs 15-3 in the third quarter and 14-0 in the final period.

“College Station is a solid football team, very talented,” JT coach Ricklan Holmes said. “Offensively they are able to move the ball when they want to and on defense they cause confusion and as a result they create turnovers.”

Sosa also doubles as punter with an average of 40.6.

As for JT, the Lions’ offense has not been the explosive unit of the past. The Lions are averaging 20.6 points per game.

Junior Cameron Ford is scheduled to start his second straight game at QB after missing a couple of starts. He has hit on 74 of 167 passing attempts for 1,156 yards with six TDs and seven interceptions. The 6-1, 190-pounder has rushed for 495 yards and four touchdowns on 115 attempts.

Kitan Crawford, who plays both running back and cornerback, is the Lions’ leading rusher — 107 carries for 995 yards and 11 TDs. He is a threat to go the distance on each handoff or reception. Sophomore Jakyron Lacy had rushed for 227 yards on 48 attempts.

Austin Campbell is the top receiver with 25 catches for 301 yards and two TDs. Frank Turner, who has made some acrobatic catches, is next with 19 receptions for 446 yards and three touchdowns. Crawford also has 19 snags for 255 yards and a TD.

Travion Ates and Crawford each have two interceptions with Isaiah Johnson picking off two.

Both teams are plus-2 in turnover ratio.

“Everybody is 0-0 and it doesn’t matter if you were 10-0 or 3-7 like we are, everybody is in the same position this week,” said Holmes, who has led the Lions to seven playoff berths in his eight years as head coach.

College Station, home of Texas A&M University, is in southwest central Brazos County just south of Bryan. According to The Handbook of Texas Online, in 1871 the site was chosen as the location of the proposed Texas A&M College, which opened in 1876. In 1877 a post office, College Station, was opened in a building near the railroad tracks, and the community took its name from the post office. ... The Cougars began playing varsity football in 2014 according to Joe Lee Smith’s TexasHighSchoolFootballHistory.com. College Station has made the playoffs all six years of its playing seasons with three district titles. College Station has an all-time record of 62-15. ... The Lions began playing football in 1906 as Tyler High. They have an all-time record of 720-391-41 with 38 playoff appearances, 28 district titles, three state championships and two state runner-up trophies. The Lions’ playoff record is 59-31-3. ... According to The Handbook of Texas Online, the Tyler townsite, located near the geographic center of Smith County, was selected by a panel of commissioners appointed by the legislature and was named for President John Tyler in recognition of his support for admitting Texas to the United States. On Feb. 6, 1847, commissioners purchased a 100-acre site from Edgar Pollett for $150, and a townsite was laid out in 28 blocks around a central square.