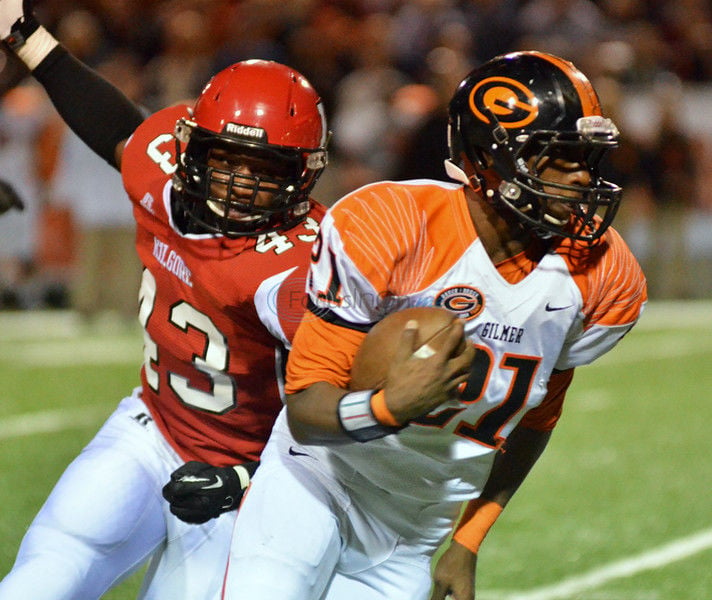 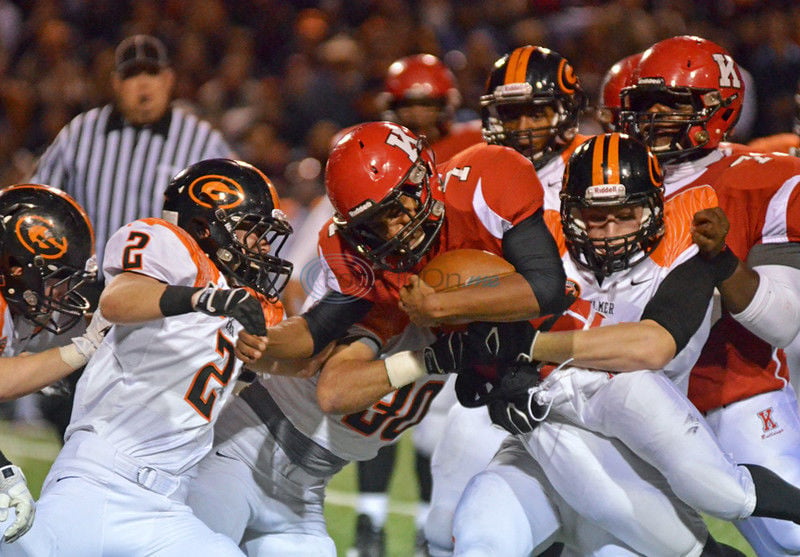 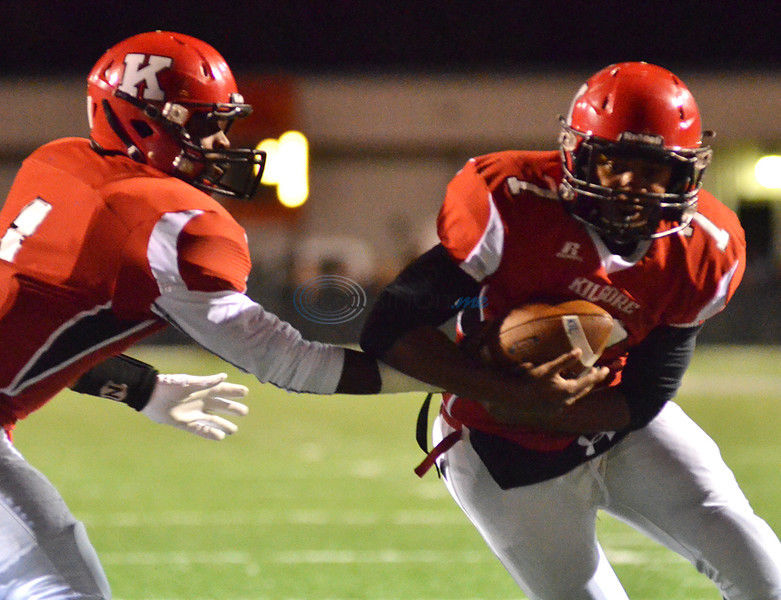 Kilgore senior quarterback Benny Colbert hands the ball off to junior running back Kevrin Justice at the goal line for a first half touchdown against Gilmer on Friday. (Victor Texcucano | Tyler Morning Telegraph) 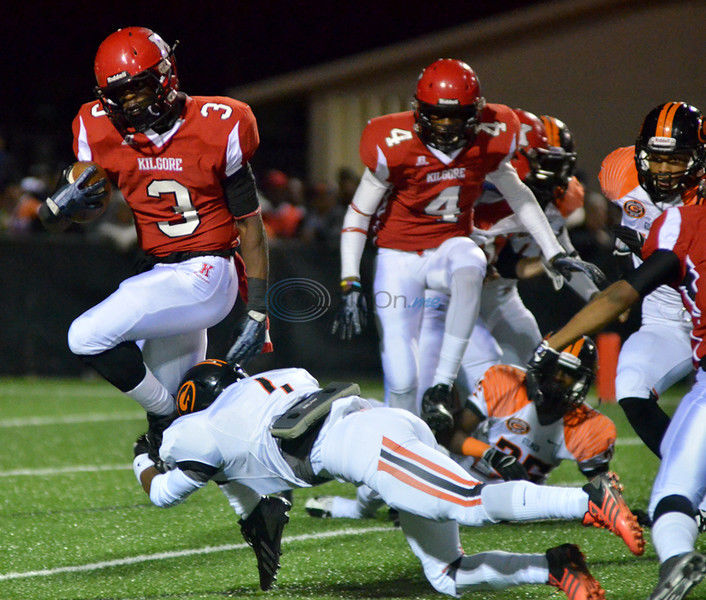 Kilgore senior quarterback Benny Colbert hands the ball off to junior running back Kevrin Justice at the goal line for a first half touchdown against Gilmer on Friday. (Victor Texcucano | Tyler Morning Telegraph)

KILGORE — Kevrin Justice rushed for 118 yards and scored three touchdowns, leading No. 3 Kilgore to a 34-29 comeback victory over top-ranked Gilmer on Friday night before a standing-room-only estimated crowd of 9,000 at R.E. St. John Memorial Stadium.

This marked only the second district loss for Gilmer since 2001. The other was to Carthage.

The victory over the Buckeyes (9-1, 5-1) assured Kilgore (9-0, 6-0) its first outright district championship since 2008 and a bi-district, Division I date next Friday against either Van or Mabank from District 15-3A in Lindale.

Justice scored on runs of 2, 10 and 22 yards as Kilgore stretched its home winning streak to nine games dating back to a triple overtime loss against John Tyler in 2011.

His 22-yard scamper, which was the winning touchdown with just 1:38 to play, came after Gilmer coach Jeff Traylor called a timeout in an effort to preserve time on the clock for his offense. Kilgore was moving the football down the field. Justice took the handoff from quarterback Benny Colbert and hustled into the end zone with little resistance.

The scoring drive covered 62 yards in eight plays in 3:24 in time. The conversion pass sailed incomplete and Kilgore led by five.

JuJu Brown, Justice’s running mate in the Kilgore offense, finished with a touchdown of his own on a 14-yard run. Brown finished with 111 yards on 14 carries in this battle of East Texas 3A heavyweights.

After the Bulldogs took the lead late, Gilmer reached the Kilgore 42. By then the Ragin’ Red defense had pinned their ears back and were coming.

Kilgore finished with two sacks against the Buckeyes. One by LaDarrin Anthony and the other by Anthony and D.Q. Scott. The second of those preceded the final play an incomplete Barr pass to Desmond Pollard.

The Kilgore crowd did not want to leave once the drama of the contest was over and the scoreboard was left lit for more than an hour after the game.

Kilgore finished with 378 yards compared to Gilmer’s 392. Kilgore quarterback Benny Colbert was 8 of 12 passing for 75 yards. He also rushed for 51 yards.

Tanner Barr, Gilmer’s standout quarterback, was 27 of 35 for 257 yards and one touchdown to Kris Boyd, who led the Buckeyes’ rushing attack with 65 yards on eight carries. Boyd also scored on an eight-yard run.

Gilmer’s Chase Tate was 2 for 2 passing for 53 yards and two touchdowns.

His scoring strikes covered 15 yards to Barr and 39 yards to Pollard.

Kilgore recovered four Gilmer fumbles in the first half.

The Bulldogs’ Aaron Foy blocked a 25-yard Pablin Olivares field goal attempt. Quavion Mumphrey scooped it up and returned it 61 yards to the Gilmer 21 yard line to set the stage for the initial touchdown of the contest, coming on a 14-yard run by Brown with 2:27 left in the first quarter.

The scoring drive covered 21 yards in just over a minute. Christian Galvan’s PAT gave the Bulldogs a 7-0 lead.

Barr, who completed his first nine passes of the game, and the Buckeyes responded, though with a four-play, 64-yard march and the tying touchdown coming on a 47-yard completion by the senior quarterback to Boyd. Olivares knotted the score at 7-7 with the extra point.

Kilgore then capitalized on the first of Brantley’s two fumble recoveries in the first half. This one set up a seven-play, 36-yard drive Kilgore navigated in 3:20 with Justice scoring on a two-yard run with 6:48 remaining in the second quarter.

Gilmer scored the tying touchdown, using a little trickery. Barr lateraled to Chase Tate, who threw it back to Barr on what was scored as a 15-yard completion down the Gilmer sideline.

Kilgore regained the lead with just 9.2 seconds left until halftime, putting together a 72 yard, 10 play drive witch Colbert hitting a 14-yard completion to Nick Orange. Galvan missed the conversion leaving the Bulldogs ahead by six, at halftime.

Gilmer took the lead on Boyd’s run with 5:57 remaining in the third quarter. Olivares’ PAT gave the Buckeyes a 21-20 lead.

A 10-yard Justice run for Kilgore opened the scoring in the fourth period.

The touchdown capped a nine-play, 81-yard march in just over five minutes.

The Bulldogs elected to go for two on the conversion and were successful as Colbert completed a pass to his fullback Jack Johnston.

Gilmer responded once again, though, getting Tate’s second scoring toss of the evening, this one covering 39 yards to Pollard with 5:02 left to play.

The Buckeyes went for two and got it, taking a 29-28 lead, on a Jaidon Parrish completion to Barr.

But, Kilgore, which came up just short of knocking the Buckeyes off last season the regular-season finale, answered the challenge.