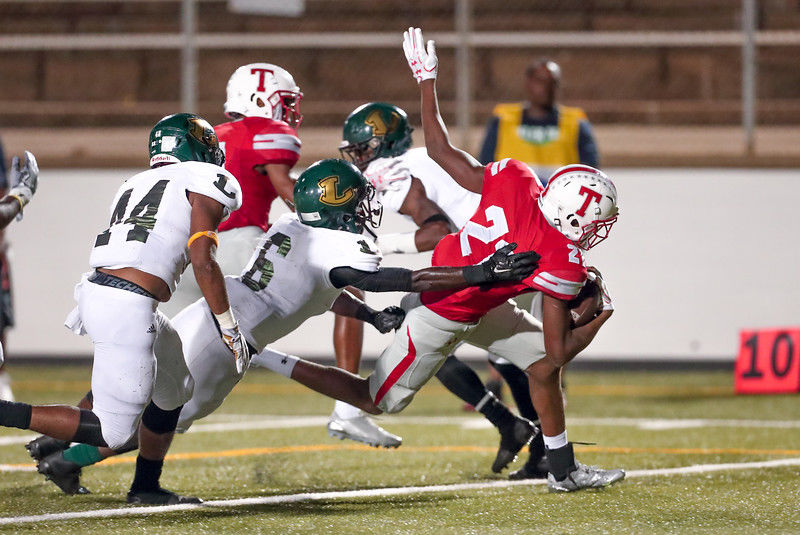 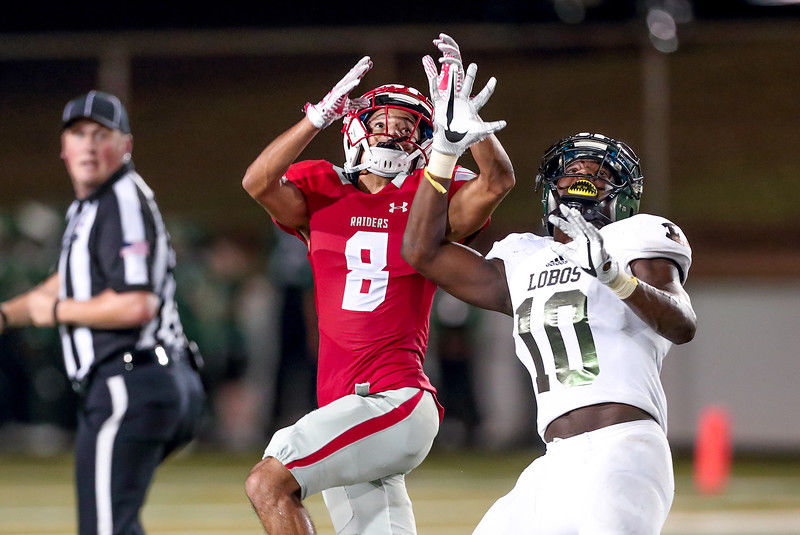 Robert E. Lee's Isaiah Davison (8) watches the ball in, as he makes an amazing catch while being draped by Lobo's Traveion Webster (10), for a Raiders TD, during the district match-up between Tyler Lee and Longview, at TMF Rose Stadium, Friday night. (Lang White / Correspondent)

Robert E. Lee's Isaiah Davison (8) watches the ball in, as he makes an amazing catch while being draped by Lobo's Traveion Webster (10), for a Raiders TD, during the district match-up between Tyler Lee and Longview, at TMF Rose Stadium, Friday night. (Lang White / Correspondent)

Longview used two big plays on special teams to turn the tide in its favor, and the Lobos stayed in control after that to defeat Robert E. Lee 56-35 on Friday at Christus Trinity Mother Frances Rose Stadium.

Played on Earl Campbell Field, there was plenty of smash-mouth football that the Tyler Rose would've appreciated.

Longview senior tailback Kendrevian White rushed 28 times for 179 yards, with the Lobos accounting for 396 as a team. The Red Raiders countered with junior Chance Amie (13-126, 2 TDs), LaDarius Wickware (10-87, TD) and Donerick McCray (14-81) part of 326 yards rushing by the Red Raiders, the most Longview has allowed all season.

The Red Raiders outgained Longview 545-523 and forced two turnovers, but REL coach Clayton George said all that matters is having more points on the scoreboard at the end.

"We didn't execute in all three phases, and that is always our plan every single night," George said. "When you play a good football team, you have to stop the run, you have to execute your offense, you have to protect the ball and you have to win the kicking game."

Longview senior Gaylon Wiley completed six passes with three of those going for touchdowns (15, 36 43) to finish with 127 yards.

The Lobos led REL 28-21 at halftime and scored two unanswered touchdowns in the third quarter to help put the game away for the visitors.

"It was what I thought; a hard-fought game," Longview coach John King said. "Tyler Lee is a good football team and Clayton is doing an excellent job and has them believing and playing hard. I am just proud for our kids; it was a great win. I knew it was going to be tough and we made enough plays down the stretch to pull out a win."

Longview struck first with a punishing 10-play, 50-yard drive, all on ground, which was capped on a 1-yard keeper by Glover.

The Red Raiders had been held on their first possession, but this time needed six plays to answer, highlighted by a 54-yard Amie pass to Rhett Parker on third-and-10. Jordan Printers eventually finished it off with a 6-yard run followed by Leonel Coreas' extra point.

The Lobos came right back and scored again, capped on a 15-yard touchdown pass from Glover to Jaylin Brown. The PAT missed, leaving the Lobos in front 13-7.

The Red Raiders answered with a little power football themselves, using a 36-yard run by Wickware to eventually set up a 1-yard scoring run by Amie. Coreas' PAT gave Lee a 14-13 lead at the end of the first quarter.

The Lobos and Glover went back up top to take the lead back on a 36-yard scoring pass to Polk off a wheel route. The two-point conversion made it 21-14.

Undaunted, Lee responded with a 75-yard drive that took seven plays and ended with a 29-yard scoring run by Amie. The PAT was blocked by Ke'Undre Wilson, a foreshadowing of things to come, leaving the score at 21-20 with the Lobos in front and 7:54 to go in the half.

REL stopped Longview, and a 55-yard run by Amie left Lee seemingly moments away from taking the lead back. A holding penalty on first-and-goal from the 2 pushed the Red Raiders back and eventually the field-goal team was called for a 23-yard attempt.

Wilson blocked this kick too, and this time it bounced straight to teammate Kobe Davis who went the other way for an 85-yard touchdown.

Longview did not have long to celebrate because Lee tied the game seconds later. Amie handed off to Wickware, who pitched it back to Amie on a flea-flicker that ended up being a 74-yard TD hookup to Davison. Lee went for two and Rhett Parker tossed it high up to Amie, who made the catch in the back corner to tie the game 28-28 with 1:49 remaining.

On the ensuing kickoff, the Lobos went in front again when A'Darius Carter rumbled and stiff-armed his way to a 74-yard touchdown return. The PAT gave Longview a 35-28 lead.

The Red Raiders attempted to answer back again with a double pass, but the receiver's pass fell incomplete to a wide-open teammate behind the defense.

Lee's Makyle Sanders intercepted Longview late in the half to stop the Lobos and keep it a 7-point deficit for the Red Raiders at halftime.

"It was (so crazy) I almost don't remember some of it," King said of the final two minutes of the half. "The big play we made by blocking a field goal and score and they go down and hit a big play and then we run a kickoff back and they answer back."

The Red Raiders gave up 21 unanswered points before Amie connected with Davis for a 60-yard strike to cut their deficit to 56-35. Lee's Sanders recovered a fumble to give the Raiders a chance to drive and cut the deficit further, but a Lee lost fumble at the 8 gave Longview the ball back with 7:49 remaining and the Lobos ran out the clock.