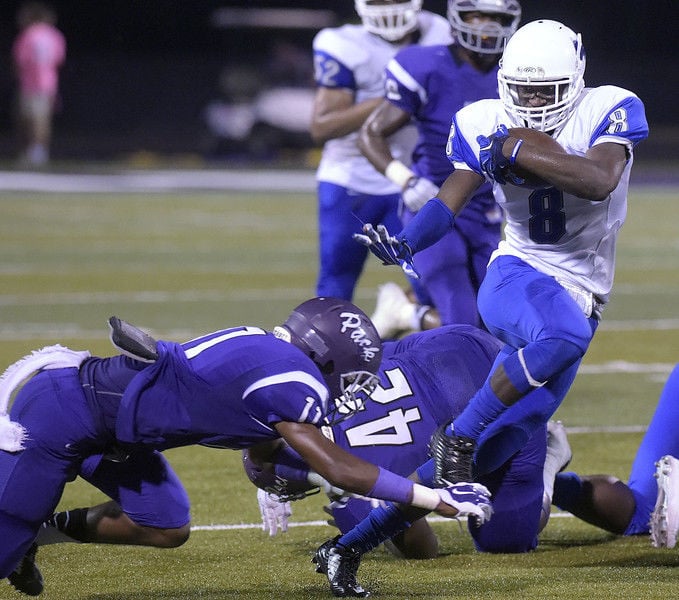 Junior wide receiver Damion Miller, center, dances around a tackle attempt during the first quarter against the Panthers on Friday at Abe Martin Stadium in Lufkin in 2015. Andrew D. Brosig/Tyler Morning Telegraph 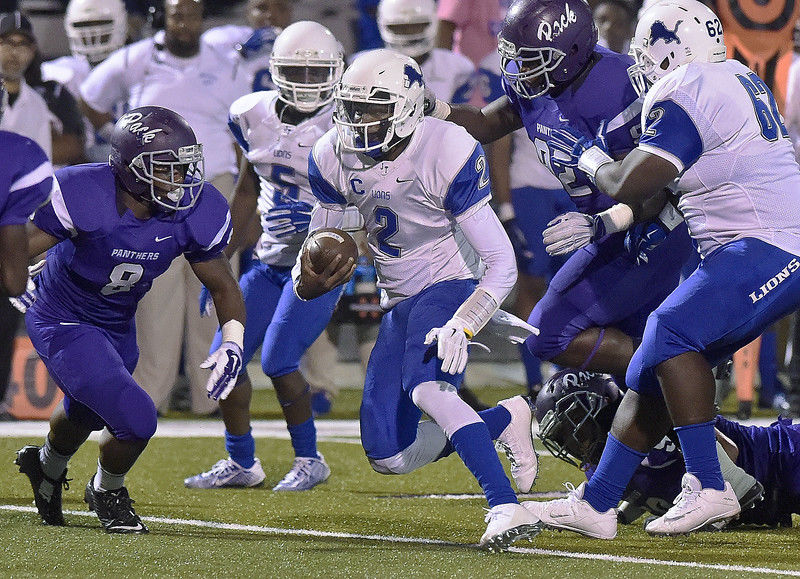 John Tyler quarterback Bryson Smith advances on a keeper during the first quarter against the Panthers at Abe Martin Stadium in Lufkin in 2015. Andrew D. Brosig/Tyler Morning Telegraph

Junior wide receiver Damion Miller, center, dances around a tackle attempt during the first quarter against the Panthers on Friday at Abe Martin Stadium in Lufkin in 2015. Andrew D. Brosig/Tyler Morning Telegraph

John Tyler quarterback Bryson Smith advances on a keeper during the first quarter against the Panthers at Abe Martin Stadium in Lufkin in 2015. Andrew D. Brosig/Tyler Morning Telegraph

John Tyler and Lufkin have been playing each other since 1914.

Only one of the prior 71 meetings took place in the postseason.

This year, the Lions (9-1) shared the District 11-6A championship with Longview but won the No. 1 seed and a right to host the bi-district game via its head-to-head win over the Lobos, who are traveling to play Beaumont West Brook on Friday.

The Panthers (7-3) finished third in 12-6A behind unbeaten The Woodlands and one-loss West Brook.

Friday's winner faces either Dallas Jesuit or Garland Naaman Forest next week in the area round.

John Tyler enters the postseason with a 9-1 record for the first time since 2012, when the Lions reached the Class 5A Division I state semifinals on a team led by the likes of Greg Ward and Tyus Bowser. JT also went 9-1 in the regular season in 2009 and 2010 before finishing 12-2 each time.

The Lions have led by at least 17 points in every game this year, excluding a 20-14 win over Mesquite. That includes the loss to Rockwall, in which the Yellowjackets rallied in the second half to win 59-58 on a last-minute, two-point conversion.

It was a loss that stuck with the Lions, who dominated the remainder of the district schedule, allowing a 3.5 points per game in the second half since the loss in which they allowed 39 second-half points.

"That's all we needed was that one game to know what a loss feels like and to know that we can't get the big head just because we're the best team out here," JT senior captain Shaundrick Williams said. "You can't because everybody is out to beat us. Nobody is our friend out here."

Of all of JT's prior opponents, coach Ricklan Holmes said the one that's most similar to Lufkin is Rockwall, which found a way to win despite being outgained 725-487.

"The way that they run their offense, the way their defense plays it reminds me a lot of them," Holmes said. "We just can't have the mistakes we had in that game moving forward to this game Friday."

Despite finishing third in its district, Lufkin will have plenty of confidence heading into the postseason. The Panthers' three losses came to teams with a combined two losses.

Lufkin lost 69-54 to Bossier City Parkway (La.) in the Battle on the Border at the Independence Bowl in Shreveport, Louisiana, played right after John Tyler beat New Orleans Warren Easton (La.). The Panthers also lost 63-42 to No. 4 The Woodlands and 70-63 to West Brook.

"They can put points on the board but that also lets you know the defense has given up some points and I think that's one thing we're going to have to capitalize on," Holmes said.

As the scores indicate, Lufkin's offense has been flying high this year.

The Panthers average 471.6 yards and 43.4 points per game, much of it from the arm of senior quarterback Kordell Rodgers. The Texas State commit has thrown for 3,103 yards with 30 touchdowns and two interceptions.

"That kid is very, very talented," Holmes said of Rodgers. "We've played against him before; we know how he played last year. I see that he's playing better this year."

Rodgers has plenty of talent around him in receivers Dhailon Phillips (1,016 yards) and Malik Jackson (922) along with running back Kahlil Brown (830 yards, 16 TDs). Rodgers also has eight touchdowns to go with 280 yards rushing.

Last year against John Tyler, Rodgers threw for 224 yards and three TDs but was just as lethal with his legs, scrambling for 104 yards and a score.

However, Lions quarterback Bryson Smith made the decisive plays down the stretch. Smith took off for a 50-yard touchdown run to put JT up 41-31 with 2:46 to play on the way to a 41-38 victory.

Smith had 350 total yards of offense in that game and this year he's averaging 361.1 per game while accounting for 41 touchdowns.

Like Rodgers, Smith has a number of receivers he can call upon, including Damion Miller (29-693), Devlen Woods (35-443) and Michael Givens-Washington (33-542). He also has a quality running back in Cameron Grant (121-779), who will continue to get most of the carries while Justin Samples still works his way back from injury.

Last year's meeting between these two, played for a statewide audience with Fox Sports Southwest at Abe Martin Stadium for the Dairy Queen Game of the Week, was emblematic of recent JT-Lufkin affairs.

The two have played each year since 2008 and in the eight games both teams have won four times, with the average margin of victory a single touchdown. The most recent two meetings were district games, with JT winning both by a total of five points, including winning 26-24 on a last-second field goal by Luis Duran in 2014.

Holmes himself recalls "knock-down, drag-out" affairs when he played Lufkin as a player in the 1990s. Those were district games back then. This being the playoffs, the stakes are raised even higher.

"Now that the regular season is over where there are no more games on the schedule, they know that moving forward it's win or go home," Holmes said. "And a lot of my guys are not ready to go home yet.

"We've got destiny right here in our hands. We've just got to be willing to close our fingers together and hold onto it."

Quick Slant: This game features two longtime rivals who come in with loads of talent on the offensive side of the ball. Both teams average near 500 yards per game and over 43 points per game. However the teams go about the offense in different ways. Lufkin gains most of its yards through the air, with Rodgers (199-307 for 3,103 yards passing, 30 TD, 2 INT) completing 65 percent of his passes, most going to Phillips (61-1,016, 9 TDs) and Malik Jackson (44-922, 9 TDs). John Tyler has been nearly 50-50 in rushing and passing, averaging 258.7 yards on the ground and 241.0 through the air. Bryson Smith (2,371 pass, 1,240 rush) is the quintessential dual threat. Defensively, JT holds the edge, at least statistically. The Lions allow 19.5 points and 339.4 yards per game compared to 34.1 and 442.5 for the Panthers. Williams has 77 tackles and five sacks as John Tyler's defensive captain and Goodson has a team-high 11 sacks. Both will be key to slowing down Rodgers. For the Lufkin defense, Grisby leads the Panthers with 107 tackles to go with four sacks, six tackles for loss and two fumble recoveries.

Quotable: "Playing them as district opponents for the past couple of years and knowing what they bring to the table, they're very athletic, very well coached football team by coach (Todd) Quick. Quarterback and a couple receivers are really good playmakers. We've got to make sure we keep those guys in check. We know we're not going to be able to stop them. It is what it is. They're too good just to stop them. We've got to be able to slow them down and capitalize on their mistakes and use that to our advantage." - JT coach Ricklan Holmes.

John Tyler vs. Lufkin At A Glance