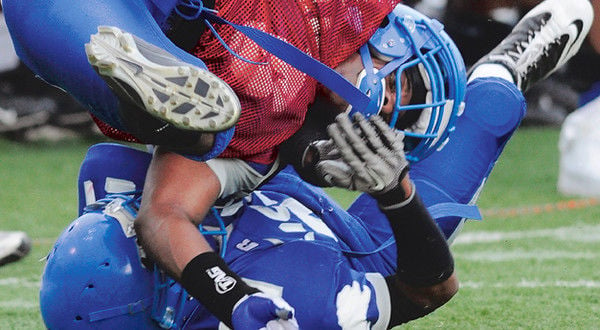 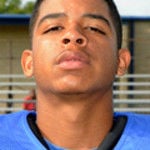 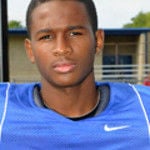 John Tyler’s starting defenders dressed differently to begin the week, just as the team seems to be hitting its peak.

The first-team stop unit all wore black jerseys, signifying a unified attitude for a side of the ball wanting to live up to high expectations set by last year’s record-setting unit responsible for 31 interceptions.

“It represents shutdown, darkness, (giving up) no yards. If your backup is working harder than you he’s going to get that black jersey. You’ll be back to wearing the blue jersey.”

The black jerseys bring attention to the starters, yet puts them on notice at the same time.

“The best 11 is going to play,” said JT sophomore free safety Terry Ausborne, who shares the team lead with two interceptions, and ranks second on the team with 17 assists. “You go out there slacking and somebody’s going to take your spot.”

JT (3-3, 3-0 in 14-4A) opened district play by forcing 10 turnovers, including four interceptions, in a 65-6 win over Hallsville. JT pitched a second-half shutout in last week’s 52-14 victory over Pine Tree to remain unbeaten in district play.

“We scratch and fight, go for all the tackles and loose balls,” said Hart, who has made 41 tackles, including a team-high 24 assists, plus recovered a fumble and intercepted a pass to date. “If it’s in the air it’s ours, that’s how we see it.”

The Lion secondary stifled their first six opponents through the air, holding them to a combined 36 of 76 passing for 504 yards, with four touchdowns and six interceptions. JT intercepted Pine Tree’s lone pass attempt last week.

The JT players credit its own high-powered offense, averaging an area-best (Class 5A/4A) 42.5 points and 471.5 yards per game, for making the defense better.

“We practice against good receivers,” Ausborne said, “(usually) better than what we see in the game.”

In a growing era of spread offenses, JT caught a break facing run-oriented teams in its first six games. That all changes Friday with pass-happy Whitehouse, who throws for an astounding 375 yards per game.

“We’re hoping it’s a tribute to defense, but we hadn’t played that many teams that’s going to throw it like Whitehouse,” JT head coach Dereck Rush said of the Lions’ defensive backfield. “Hopefully our kids are ready for the challenge.”

As most players drifted toward the fieldhouse following Tuesday’s practice, JT’s back seven stayed around for extra drills while the scout team offense simulated Whitehouse’s explosive attack.

“They’re a good offense. I’ll give them their credit,” Hart said of Whitehouse. “But I feel our defense will give them looks they’ve never seen before. We’re in for a dogfight in this district. They’re not going to lie down. We’re going to have to fight.”

LIONS’ TALES: JT practiced with its full complement of starters for the first time since Zero Week on Monday. Returnees included senior athlete DeVonte Haggerty and sophomore slotback Reggie Gipson on offense. On defense, senior cornerback Terrance Stevens expects to see action for the first time since the opener. …Tickets to Friday’s game at Whitehouse will be sold at T&T Lewis and Tyler Athletics through today, on the JTHS campus to students and faculty only through noon on Friday, and at the TISD Athletic Office until 1:30 p.m. Friday. Presale tickets cost $3 for students and $5 for adults. JT is being allotted 2,000 tickets for the game, none of which will be sold at the gate in a contest expected to be a sellout. …The JT freshmen improved to 5-1 on the season and 3-0 in district with last week’s 32-6 win over Pine Tree. The JT JV dropped to 2-1 in district with a 28-25 loss to Pine Tree. Both JT sub-varsity teams take on Whitehouse today at Trinity Mother Frances Rose Stadium, starting with the freshman contest at 5:30 p.m.