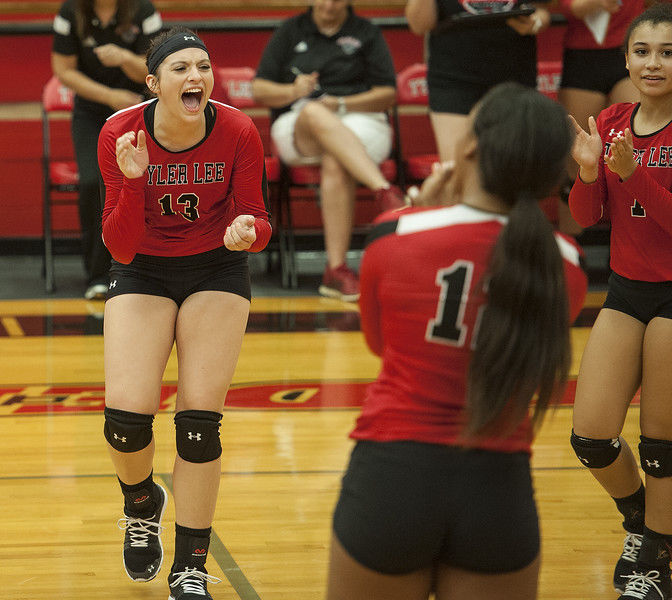 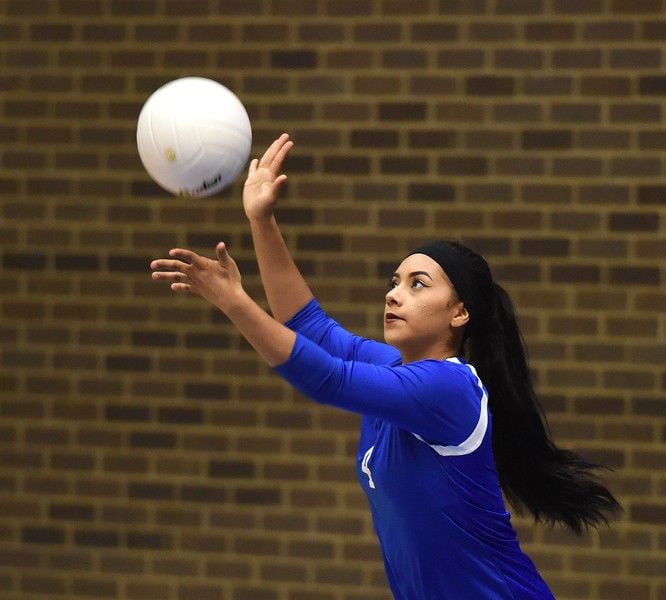 John Tyler's Keily Sanchez serves the ball during the second match of their game against Nacogdoches Tuesday night August 9, 2016 in Tyler. (Sarah A. Miller/Tyler Morning Telegraph)

John Tyler's Keily Sanchez serves the ball during the second match of their game against Nacogdoches Tuesday night August 9, 2016 in Tyler. (Sarah A. Miller/Tyler Morning Telegraph)

Now the Lady Lions are back in the state's highest classification, grouped up with five Dallas-area schools.

But for JT's first volleyball match in District 11-6A, the Lady Lions are staying at home and facing a familiar foe.

"(We're) excited about district play," JT coach LaMessa Derrett said. "Opening up to our crosstown rival is good for them. Better to see crosstown family first instead of our I-20 buddies in our district."

"I have heard good things about all of them," Derrett said of the district competition.

"I do feel like we are more prepared than we were last year; I think we have taken it more seriously using those non-district games to prepare for district," Lee coach Ronda Shirley said.

Heading into the league opener against JT, Shirley cautioned her team not to overlook anyone and focus on themselves.

"Everybody's record is 0-0 and everybody has the opportunity to finish well in district and vie for those top four spots," Shirley said. "We have to get over that hump and not caring what name is on the other side of the court - I think that's been the biggest crutch as long as I've been here.

"When we take care of our side of the net and play confidently and use the skills that we have, I see some great things happening."

Lee senior Deja Hamilton (146 kills) and junior middle April Brown have led the way offensively with libero Taylor Hale solid in the back and everything piloted by setters Mallory Collins and Aliyah Shirley.

"Our offense looks a little more fluid this year; we are more aggressive," Shirley said. "Deja is more consistent and kind of become a student of the game when it comes to hitting and her stats show that. April brings the power and we try to use that for sure and she can definitely be a difference maker.

"Taylor has done a great job on the back row and has a little edge to her as far as owning her position and playing confidently and both setters are doing what is required: delivering the ball and seeing who is ‘on' and keep feeding them."

The Lady Lions (9-13) have had an up-and-down non-district slate.

The season began well with three straight wins but senior leader Dazmonique Johnson injured her ankle during the fourth match.

Johnson returned in a win over Marshall on Sept. 2 but still isn't 100 percent, Derrett said.

"We are gradually trying to work her back to where she was," Derrett said. "Glad to have her back though. We have really missed her motivation, leadership, blocking and attacking. She was our team glue that held us together."

While the Lady Lions have experienced players such as seniors Johnson and Avoree Oliver as well as junior Jazmyne Hicks, they are young in more than a few spots.

"I start four sophomores that are growing every day," Derrett said. "It's great to have them for two more years after this one."