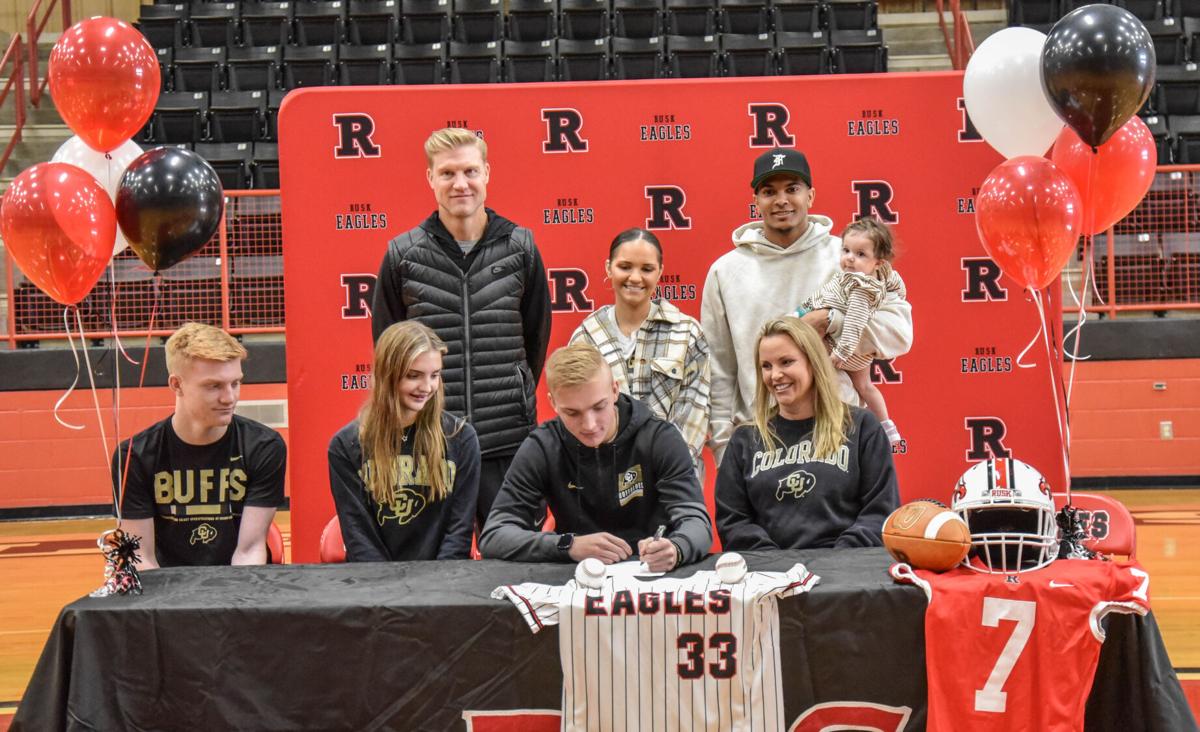 Rusk senior Owen McCown, who will play football at the University of Colorado, during a signing ceremony Wednesday at Eagle Coliseum in Rusk. 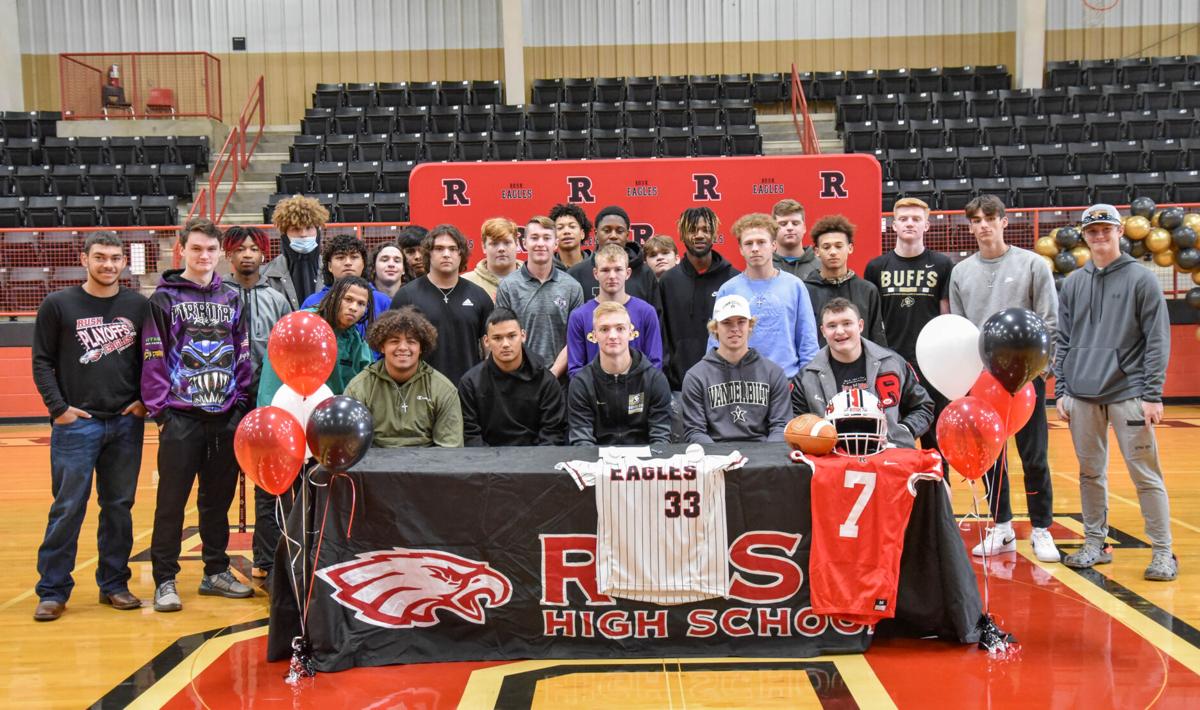 The Rusk High School football team smiles for a photo with teammate Owen McCown (seated center), who will play football at the University of Colorado, during a signing ceremony Wednesday at Eagle Coliseum in Rusk. 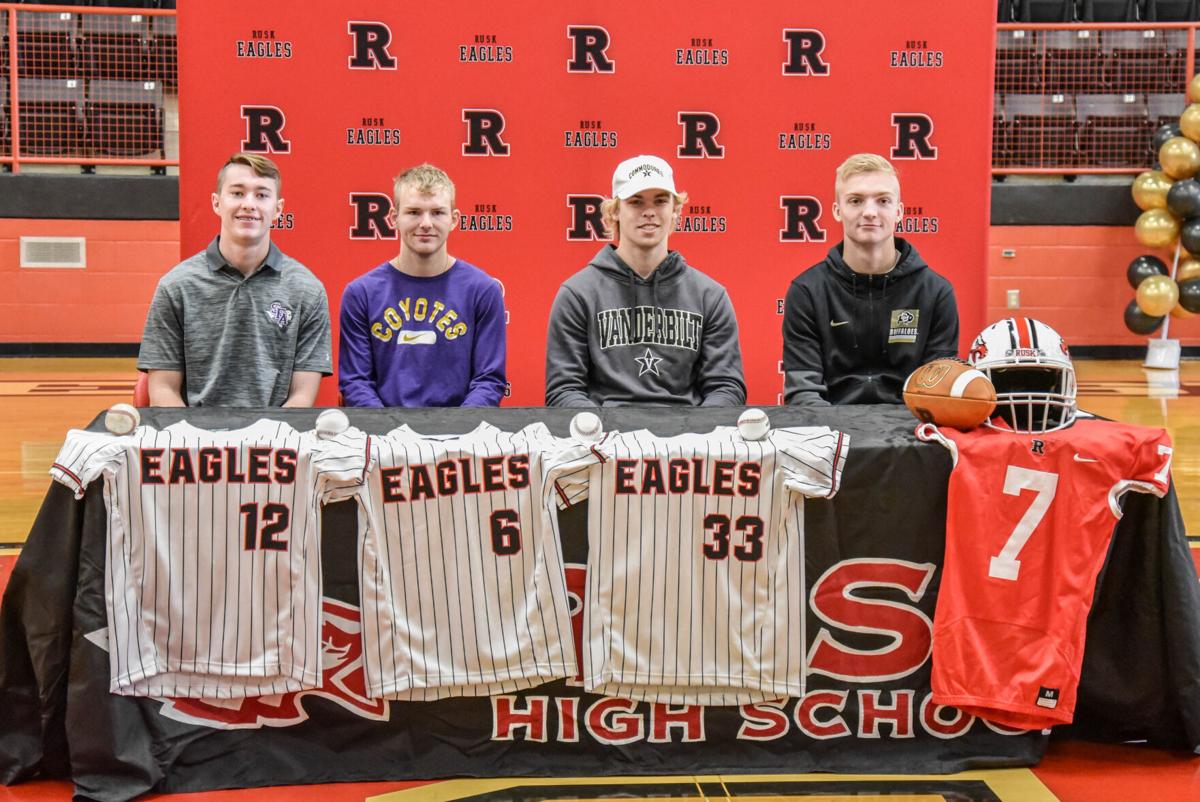 (From left) Rusk student-athletes Will Dixon, Mason Cirkel, JD Thompson and Owen McCown sign their letters of intent on Wednesday to play at the collegiate level.

Rusk senior Owen McCown, who will play football at the University of Colorado, during a signing ceremony Wednesday at Eagle Coliseum in Rusk.

The Rusk High School football team smiles for a photo with teammate Owen McCown (seated center), who will play football at the University of Colorado, during a signing ceremony Wednesday at Eagle Coliseum in Rusk.

(From left) Rusk student-athletes Will Dixon, Mason Cirkel, JD Thompson and Owen McCown sign their letters of intent on Wednesday to play at the collegiate level.

RUSK — McCowns have been known to excel as quarterbacks at the high school level in East Texas and then move on to the next level.

First was Randy McCown, who after his time at Jacksonville High School went on to be a quarterback at Texas A&M.

Then was Josh McCown, another standout at Jacksonville before going to SMU and Sam Houston State and then having an 18-year NFL career as a quarterback with 12 different teams.

And Luke McCown went from Jacksonville to Louisiana Tech before a 14-year NFL career as a quarterback with six different teams.

On Wednesday, it was another quarterbacking McCown who celebrated going to the next level.

Owen McCown — Josh’s oldest son — signed with the University of Colorado in December but participated in a ceremony with his classmates — baseball players JD Thompson, Will Dixon and Mason Cirkel — on Wednesday inside Eagle Coliseum on the Rusk High School campus.

“I am very proud of him, and not just of Owen, but the other young men, as well,” Josh said. “I think it’s a reflection of the program Coach (Thomas) Sitton is building down here at Rusk. And how proud we are of the baseball boys and the accomplishments they made last year, and we are looking forward to the season for them. It’s a proud moment for all these families involved. I’m just excited for these kids.”

Owen said there were multiple factors that led him to choosing Colorado, one of which was getting the chance to play for someone his dad once had as a coach, Colorado head football coach Karl Dorrell.

“I think my dad’s previous relationship with him, we knew him very well,” Owen said. “First of all, he’s an even better man than he is a coach, and the type of offense he runs is great. Outside of football, Colorado is a great place to be with great academics and stuff like that.”

When Josh played for the New York Jets in 2017-18, Dorrell was the wide receivers coach for the Jets.

“I think when the kids go for college, obviously the fit for the athletic experience is part of it, but more than anything, the type of man that Karl Dorrell is is what matters to me the most. His character is through the roof. His integrity is solid. I just believe in him. I’m thankful that my son will get a chance to be around him for the next four years and grow as a man more than anything.

“I think he’s a heck of a football coach. He’s been around a lot of places and been around the NFL. And Owen having grown up in this business and seeing football through the lens of the NFL, I think it’s a good fit on the field, as well. I look forward to him just getting there and learning from those guys and continue to help Karl build the program he sees for the future.”

Josh got to experience being a receivers coach this year at Rusk, coaching both of his sons, Owen and Aiden.

“It was special,” Josh said. “The most special moment I’ve had on a football field in my life was this year. Just to be out there with my sons, those are memories I will cherish forever.”

“He’s a free coach,” Owen said. “I’ve learned a lot from him. This past year, sometimes you might argue, but he’s never wrong because he’s done it and he knows what’s best for me.”

“Owen is one of the best quarterbacks that I’ve ever seen play the game,” Sitton said. “The ball comes out of his hands as fast as anybody I’ve ever seen throw it. His work ethic is second to none with the effort he brings. The toughness that he showed every Friday night was just unbelievable.

“Colorado is getting a great leader and a great competitor. He’s one of the toughest kids probably not just in the state of Texas but in the entire nation. He’s a guy that loves football and has a passion for it. He always puts his teammates first. He’s just an incredible individual that is going to help them as soon as he steps on campus.”

Owen said he feels like he has the tools that can help him be successful at the next level.

“Knowledge of the game is No. 1,” Owen said. “I feel like that’s where I have a head start on the other quarterbacks. I’m ready to get up there and turn Colorado around.”

Owen said he plans to major in kinesiology.