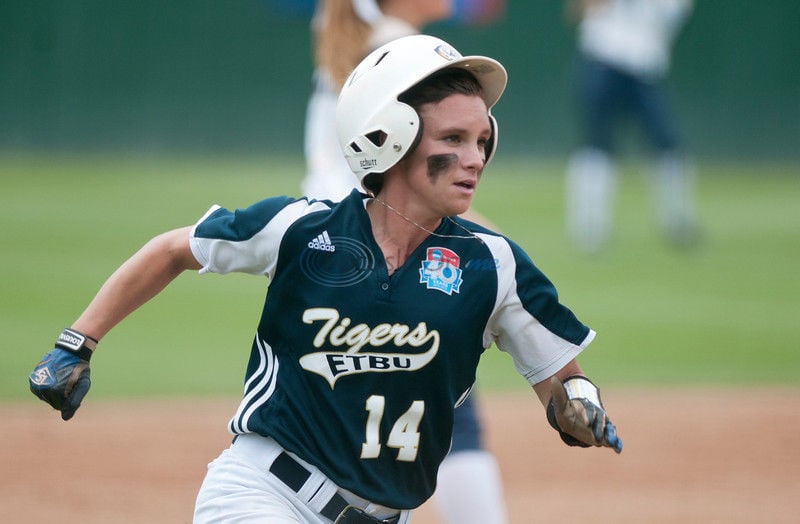 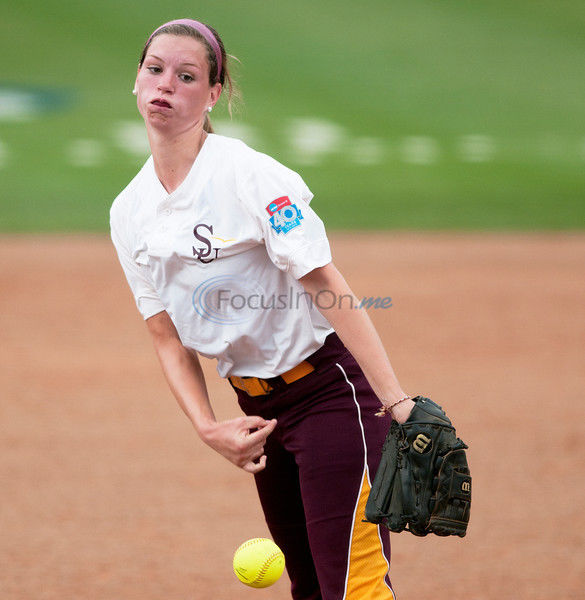 Salisbury (Maryland) pitcher Rachel Johnson fires to the plate in the 7th inning against Wisconsin-Whitewateron Friday. She pitched a 5-hit shutout for the win. (Herb Nygren Jr / Tyler Morning Telegraph) 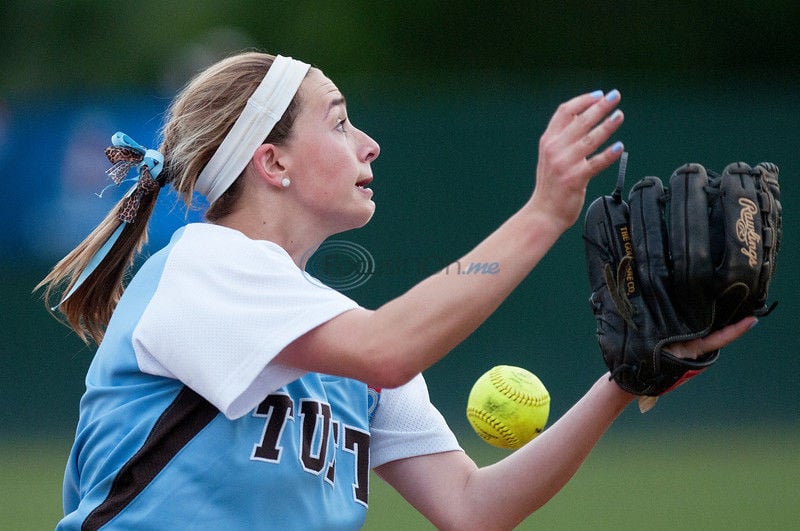 Salisbury (Maryland) pitcher Rachel Johnson fires to the plate in the 7th inning against Wisconsin-Whitewateron Friday. She pitched a 5-hit shutout for the win. (Herb Nygren Jr / Tyler Morning Telegraph)

Thus, the tournament is down from eight to six teams as Rochester and Trine were eliminated.

No. 1 Tufts and No. 4 Salisbury are both unbeaten and thus receive a day off today.

Salisbury (42-3) will play the winner of the St. Thomas-Montclair State game at noon Sunday.

Defending national champion Tufts (44-3) will play the winner of the ETBU-Wisconsin-Whitewater at 2:30 p.m. Sunday.

After being shut down on the opening day of the tournament, the Tommies of St. Thomas got things going on the second day.

Gregory was 3 for 3 with two RBIs.

St. Thomas is 6-0 in elimination games in this year's NCAA postseason play. The Tommies will tie a school record for most games in a season today as they play Game 52 in another elimination situation.

Katie Jo Delisle took the win in the circle with a five-hitter.

ETBU kept its hopes of winning another national championship when the Tigers blasted two home runs and Shelby Parker had another stellar effort in the circle.

The Tigers scored an 11-3 triumph over Trine, the visitors from Indiana.

Parker (24-6) finished the game with her 200th strikeout of the season and now holds ETBU's single-season record for strikeouts, surpassing Alicia Taylor's 198 strikeouts from 2002.

Romero, Jessica Bowden and Lacey Lindsey each had two hits for ETBU. Romero had three RBIs while Lindsey and Lacy Liles had two RBIs apiece.

Rachel Harris and Amy Newell each belted home runs for the Thunder.

The loss eliminated Trine from the tournament.

A second win at the national softball tournament was welcomed by Sea Gulls coach Margie Knight.

Not only is Salisbury undefeated after a 5-0 win over Wisconsin-Whitewater, but also the Sea Gulls get a day off.

"The format for Division III has changed and after being around for a number of years, a day off is really appreciated," Knight said.

Knight's squad, behind the pitching of Rachel Johnson and a three-run homer by catcher Rebecca Hoey, improved to 2-0.

Johnson (27-2) limited the WarHawks to five hits while striking out 10 and not issuing a walk.

"Rachel was hitting her spots," Hoey said. "I have confidence in the entire pitching staff; when I make a call they will throw the pitch."

Paige Knussman led the way for the Sea Gulls with two doubles, while Hoey had two hits including the homer

Mimi Ramirez paced UWW with a double and a single, while Laura Eichenold had two hits. Amy Ricci added a single.

Tufts moved another step closer to a possible repeat with another solid win over Montclair State, a 5-2 victory.

Allyson Fourtnier (25-0) had a stellar effort in the circle, allowing three hits and one earned run while striking out eight.

Cassie Ruscz and Bri Keenan led the Jumbos' offense with 3-for-4 outings and Jo Clair was 2 for 2 with another homer.

Dana Amato hit a homer for the Red Hawks. Jaclyn Allegretta had an RBI single.

Game 13: If the winner of Game 9 defeats Salisbury, Game 13 is necessary.