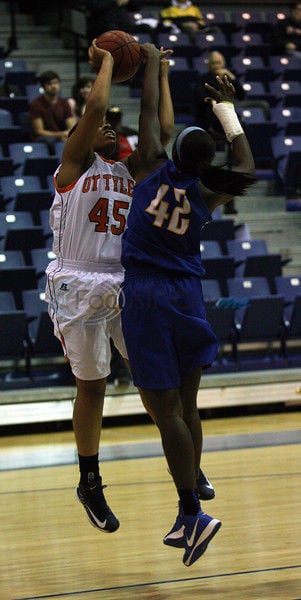 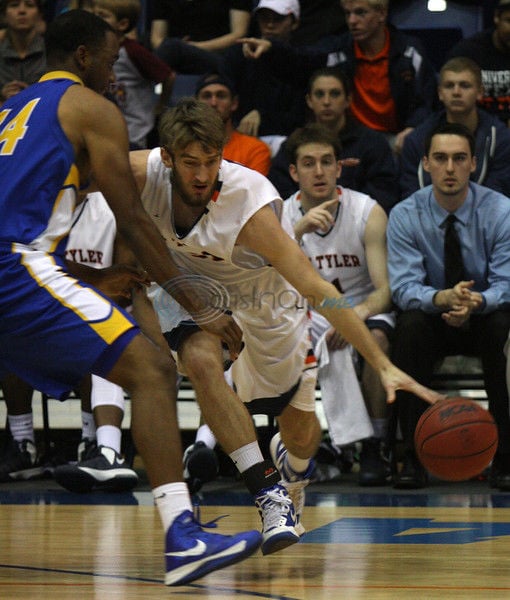 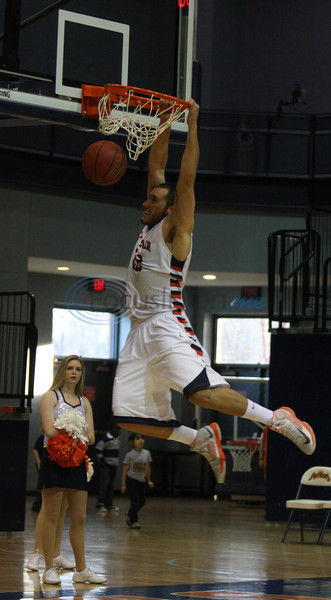 UT Tyler's Darren Houlison breaks away for the slam against LeTourneau on Saturday at the Herrington Patriot Center. (Jake A. Waddingham | Tyler Morning Telegraph)

UT Tyler's Darren Houlison breaks away for the slam against LeTourneau on Saturday at the Herrington Patriot Center. (Jake A. Waddingham | Tyler Morning Telegraph)

The UT Tyler Patriot basketball teams had an outstanding Saturday, sweeping a doubleheader against the LeTourneau Yellowjackets in American Southwest Conference matchups.

The Patriot women handed their counterparts a solid beat down, winning the game 93-49. They improved to 11-6 (6-5 ASC) and are tied for fourth place in the ASC East.

The men won a closer, but still uneven affair in the second matchup of the afternoon, 89-68. The Patriot men improved to 12-5 (7-4 ASC) and are now in second place in the ASC East.

The top four teams in each division of the ASC advance to the conference tournament at the end of the season.

The UT Tyler Patriot women firmly defeated LeTourneau 93-49 on Saturday thanks to an impressive defensive performance and an aggressive mindset on offense.

The Patriots clouded the Yellowjackets all game with a full-court press that quickly stifled any offensive success from LeTourneau in the ASC East matchup.

The UT Tyler women forced LeTourneau into 23 turnovers, 18 of them coming from steals. The Yellowjackets were unable to drive to the basket without a Patriot getting at least a hand on the ball.

On the offensive side, the Patriots put on an offensive clinic, led by Brittany King, who was 18 of 19 on free throws and 2 for 3 from the field, finishing the game with 22 points.

The Patriots will need to continue their aggressive style of play to have a shot at the postseason, head coach Kevin Baker said.

"That's what we do," he said. "We press for 40 minutes and we play as hard as we can and let the chips fall where they may."

The Patriot men started the second game of the doubleheader in a similar fashion, taking an early lead and extending it throughout the game.

Defensively, a LeTourneau team that shot 42.9 percent from the field helped the Patriots. The UT Tyler men recovered 30 defensive rebounds.

The Patriots also put on a passing display, with several skillful assists, including several behind-the-back and no-look passes.

The UT Tyler men will enjoy the next five games at home after accumulating a 7-3 record on the road thus far.

"We did our duties, so to speak; we played on the road a good bit," head coach Kenny Bizot said. "It's nice to be here. We get to do more film sessions, have more practice time, more shoot-arounds. We're used to our surroundings."

The Patriots return to action Thursday when they host Louisiana College.