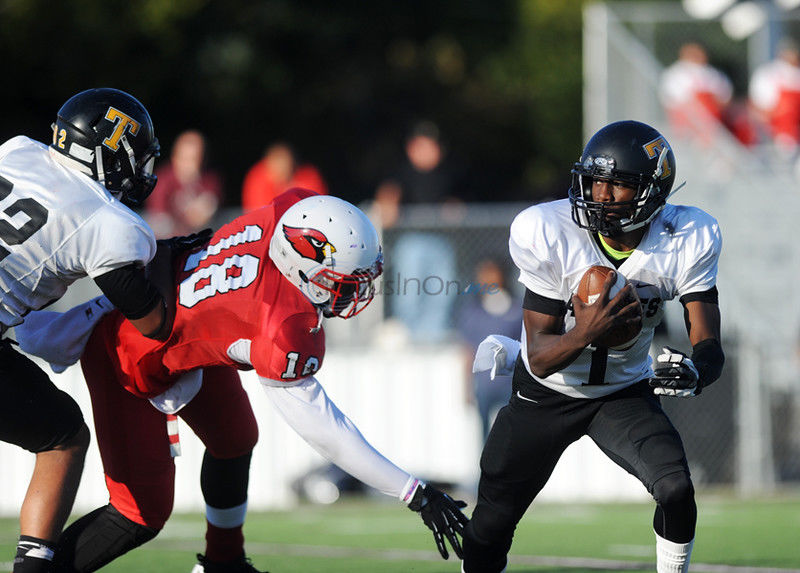 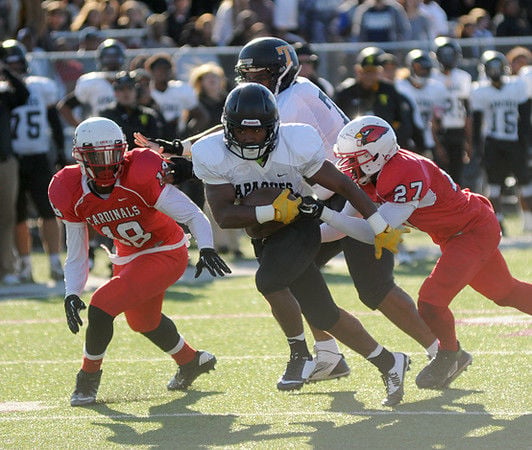 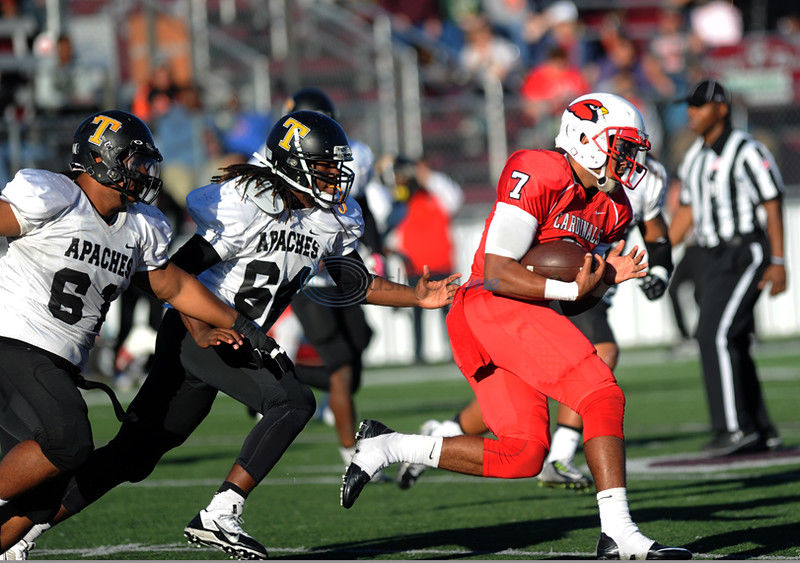 ATHENS — Combine a high-octane offense with a speedy defense and you have the No. 3-ranked Trinity Valley Community College Cardinals.

You also have an unbeaten and Southwest Junior College Football Conference championship team.

TVCC, directed through the air by Jerrod Evans and on the ground by Luis Lopez, scored a 73-46 win over No. 13 Tyler Junior College on Saturday in the SWJCFC championship game before 3,500 fans at Bruce Field.

The 11-0 Cardinals have earned the right to represent the conference in the C.H.A.M.P.S. Heart of Texas Bowl, but would rather take on either No. 1 Iowa Western or No. 2 and defending national champion East Mississippi in the national title game.

“Hopefully, we will get a chance,” TVCC coach Brad Smiley said. “We just won over a very good Tyler team that is ranked No. 13 and we have defeated other ranked teams in Navarro, Blinn and Kilgore. Hopefully, the voters will look at our whole season.”

TJC coach Danny Palmer added, “I am very proud of our team, but Trinity Valley was just a better team than us. Brad has a very good team. They had more speed and No. 25 (Lopez) was the difference.”

The Apaches (8-3) are conference runners-up for the second time in four years. They are also hopeful of going bowling for the second straight season.

“I hope the bowls look at our team,” Palmer said. “This has been an enjoyable team to coach. They are good kids. They are fun to be around. I was proud of the effort. The whole team kept competing. I am also thankful for our fans. Our side was packed.”

Both Palmer and Smiley said the difference was turnovers. The Apaches had three fumbles (all in the second quarter) and an interception.

The teams kept matching one another in the first half until TJC had three consecutive fumbles.

Before the miscues, the Cardinals led TJC, 28-27, with just over five minutes left in the first half.

However, the turnovers helped TVCC take a 45-27 with 17-straight points — 41 TD run by Lopez, 31 TD run by Evans and a 42-yard field goal from Leo Peralta. The three-pointer came with 27 seconds left in the first half.

TJC did get a 44-yard field by Ljundrim Kaba, the former Tyler Lee star and a possible Mississippi State Bulldog, at the end of the half as the Cardinals committed a personal foul which meant an untimed down. Thus, Tyler trailed 45-30 at halftime.

But the Cards carried the momentum into the third quarter, outscoring the Apaches 21-0 in the period.

Chaston Bennett starred for TJC once again as the sophomore from Rusk rushed for 144 yards on 25 carries. He also scored his 25th rushing TD of the season, which leads the nation, on a 23-yard dash in the fourth period.

Melvinson Hartfield did his best to try and replace injured speedy receiver Ryan Parker, who tried to play but his ankle sprain kept him out most of the game. Hartfield had 11 catches for 116 yards and a TD. Parker had one catch for two yards. The freshman from Keller had eight TD receptions in the last three games.

Lopez led the Cardinals with 219 yards rushing and three TDs on 14 carries. Evans tossed for 261 yards and four TD passes. He also rushed for 109 yards with two TDs. The transfer from the Air Force Academy was subbing for injured starter Kyle Postma, who was out with a hamstring issue.

Brandon Stewart had an interception for the Cardinals.

TVCC knows it is going bowling, but the location is up in air. The Apaches are hopeful they get a chance.