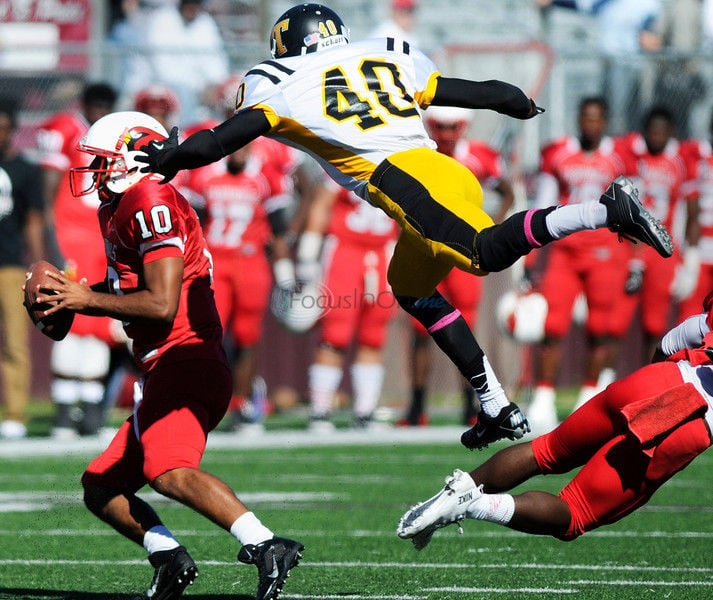 TJC's Darian Morris jumps over a TVCC blocker to get to QB Ryan Polite in the game Saturday afternoon at Bruce Field in Athens (Herb Nygren Jr. | Tyler Morning Telegraph) 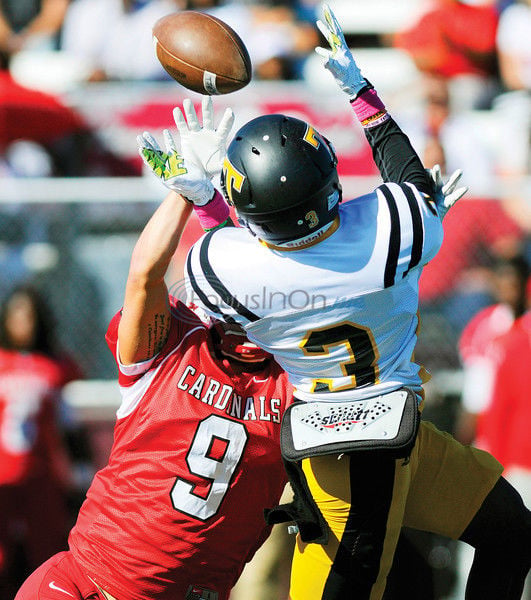 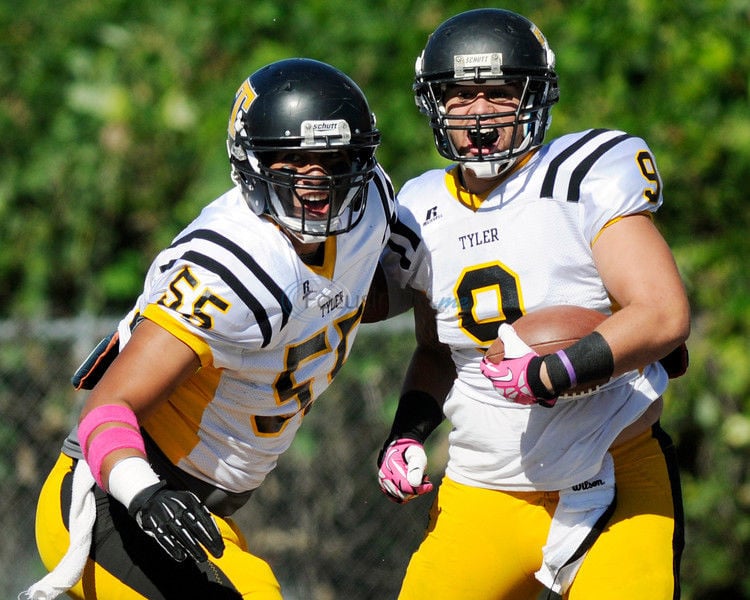 TJC's Darian Morris jumps over a TVCC blocker to get to QB Ryan Polite in the game Saturday afternoon at Bruce Field in Athens (Herb Nygren Jr. | Tyler Morning Telegraph)

ATHENS — After relying on defense and special teams, Tyler Junior College took the opening possession of the second half and moved the ball with ease. Just like that, the Apaches took an 18-point lead and appeared on the way to another win.

On a crisp and bright fall afternoon, TJC's hopes for staying unbeaten turned overwhelmingly bleak with the top playoff seed on the line. The third-ranked Apaches allowed 42 unanswered points in a 55-31 loss to No. 17 Trinity Valley in a Southwest Junior College Football Conference showdown Saturday at Bruce Field.

In front of a packed TVCC homecoming audience, TJC (7-1, 4-1) took a 31-13 lead with 11:36 left in the third quarter when Terrance Taylor scored from 14 yards away to complete the Apaches' most impressive drive of the game. But things were never the same as TJC fell victim to the opposing passing attack, turnovers and a controversial call.

"We made too many penalties and made too many mistakes to beat a good football team," Apaches coach Danny Palmer said. "I give them credit. They did a great job of coming back."

TVCC (6-2, 5-1) quarterback Ryan Polite finished 26 of 51 for 407 yards and accounted for four touchdowns (three passing). The sophomore from DeSoto got help from a defense that intercepted TJC quarterback Matt Davis (playing for injured starter Randy Price) twice in the second half, once with the Apaches driving for a third-quarter insurance score while still holding the lead.

"I'm so proud of the guys and so happy for them," said Cardinals coach Brad Smiley, whose team has won five consecutive. "We had a great week of preparation. …I got a group of guys who've never flinched, all season long."

TVCC's Josh Pickett returned a fumble 31 yards to the end zone with less than three minutes remaining to complete the resounding second half. That followed a controversial call on which TVCC advanced a blocked punt – which set up a score — despite the ball seeming to cross the line of scrimmage.

"We blocked the punt and if the ball was over the line of scrimmage and they caught it and (the refs) gave it to him, then that was a bad call," Palmer said. "But that didn't cost us the game. We couldn't block them in the second half. "

TJC took a 24-13 lead into the break without generating much offense and going 0 for 7 on third downs. The reason: defense and special teams.

On the game's first play, Apaches sophomore linebacker Caleb Tuiasosopo jumped on a Polite fumble and returned the ball three yards for a 7-0 lead with only 11 seconds having expired from the clock. TJC's second score came with 9:24 remaining in the second quarter, thanks to Devante Davis tipping a Polite pass to himself and returning the ball 44 yards for a score.

On special teams, the Apaches blocked a punt inside TVCC's 20 and scored their first offensive TD one play later on a 6-yard run by Dobbins.

The Apaches finished the half with only 85 total yards, including only 21 carries for 64 yards and a 0-for-7 performance on third downs. TJC's defense spent much of the half on the field; the Apaches had only 29 plays compared to TVCC's 60.

"Our defense stayed on the field too long," Palmer said. "We got some running backs beat up and got a quarterback hurt, but they are still a very, very good football team."