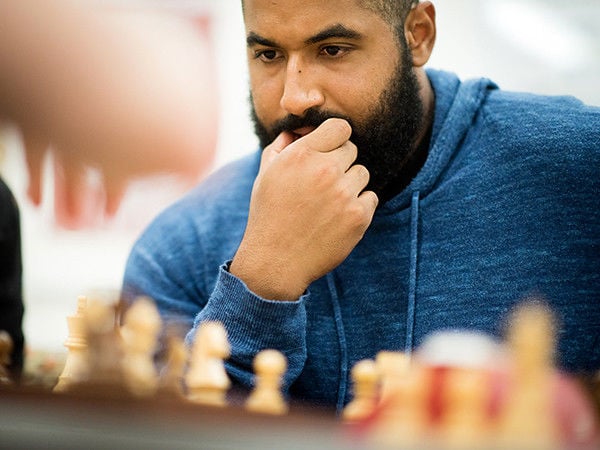 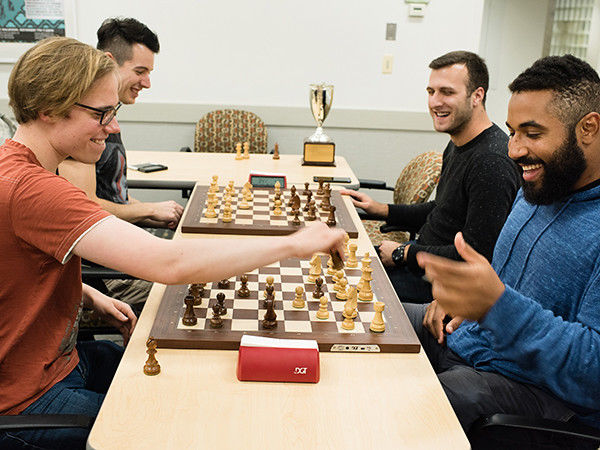 On the football field, lining up John Urschel across from Tanguy Ringoir would be unfair and possibly lethal.

Urschel, a Baltimore Ravens offensive lineman, is 6-foot-3 and weighs more than 300 pounds. Ringoir, a grandmaster chess player known as the "Belgian Butcher," is a flight risk in a sharp wind.

Across the chess board, they are better-matched opponents.

Urschel is pursuing a PhD in math at MIT during the offseason and last year published a paper titled "A Cascadic Multigrid Algorithm for Computing the Fiedler Vector." Ringoir is studying economics at the University of Maryland Baltimore County and captains its powerhouse chess team, which has won six national collegiate championships.

Squaring off recently on campus, the 25-year-old lineman surveyed the board, then pushed one of his pieces into a problem.

"Finally," the butcher said, making a move that knocked Urschel back to his goal line. "I kept thinking, 'When will he make a mistake?' "

Urschel resigned, offering his enormous right hand across the board. There is no equally civilized move in football, especially Sunday when the Ravens played the Redskins in Baltimore. And for that, Urschel is thankful. The noncontact world of chess is where he exercises his brain, and his vicious competitiveness, when he's not blocking blitzes or solving problems in applied mathematics.

That difference - taking on beasts, not pawns - worries his family, math mentors and chess buddies as the reported number of ex-National Football League players suffering from brain damage increases.

More than 40 percent of retired players showed signs of traumatic brain injury, a study released earlier this year found. Some have even killed themselves. What, Urschel's relatives and friends sometimes wonder, will be left of his brain when he retires to pursue a scholarly career in math? Is his four-year, $2.3 million contract worth the possible long-term costs?

"I think it is a valid concern, and I have talked to him about it," said Ludmil Zikatanov, a math professor at Penn State University, where Urschel earned his bachelor's and master's degrees. "It is obvious he is very talented in math and will one day be teaching at a top university."

His mother, Venita Parker, also worries. Going back to his college days, she has asked him the same question after every season:

And Urschel will answer, "No, I still have some more football left in me."

People who encountered Urschel as a child generally came away with two impressions. One, he was a very smart boy. Two, he was a very large boy. His parents - father a surgeon, mother an attorney - divorced when he was 3.

Raising him as a single mom in Buffalo, Parker bought him math games at Toys 'R Us, but he quickly conquered them. She bought games for higher age groups, but he mastered those, too. Her son's brain became increasingly costly. Parker challenged him at stores to quickly calculate the amount of change she was supposed to receive. If he was correct, he could keep the amount.

"After a few weeks, we had to stop that," Parker said. "It was just too expensive."

One day, she taught him how to play chess. That didn't turn out well for her either.

"He quickly became better than me," she said.

Urschel was an equally astute athlete, though his size was problematic for youth football. He couldn't play Pop Warner because he weighed too much. He couldn't play for his middle school because the circumference of his head exceeded the capacity of the team's helmets.

Urschel played lacrosse and soccer instead, waiting until his freshman year of high school to play football. Why did he yearn for football? Urschel admired his dad's success in college football at the University of Alberta, where he played linebacker but became a surgeon instead of pursuing a pro career. Also, Urschel enjoys physical contact.

"I love hitting people out there," he said.

Urschel turned down scholarship offers to play at Stanford, Princeton and Cornell, choosing Penn State for its combination ofbig-time football program and solid academics. "I never wanted to have to make a choice between football and academics," he said. "They were both important to me."

So Urschel studied math. And he played for Joe Paterno.

He made straight A's. And he was drafted by the Ravens in the fifth round.

"I have never had a student like him," said Zikatanov, Urschel's Penn State math mentor.

And though Ivy Leaguers and gifted minds are found throughout professional sports, there are few professional athletes like him in history - with the gravitas and pure genius that go beyond the extraordinary.

There was Bill Bradley, a Rhodes scholar who played basketball for Princeton and then the New York Knicks before becoming a U.S. senator. Moe Berg, a baseball player in the 1920s and '30s who graduated from Princeton University and Columbia Law School, spoke multiple languages and became a spy during World War II. And Byron White, who led the NFL in rushing in the 1930s and later became a Supreme Court justice.

But none of them, even White, endured the relentless and violent hits to the head that today's NFL players live through. Urschel says he has calculated the risk.

"I understand this could be a thing, and I recognize it completely," he said, "but I accept the risk."

So far, he's suffered just one concussion. He said his dad, now 58, is doing well after playing college football at an intense position.

Urschel doesn't worry what his life might be like when he's 60 or 70. And he says he's not playing for the money. He lives frugally, driving a 2013 Nissan hatchback.

"I think for a lot of things in life, it's less about the length of time and more about cherishing the time you have," he said. "And let me tell you, I'm living an amazing quality of life. I get to play football. I get to play math. I get to play chess."

Urschel began taking chess seriously during his junior year at Penn State, when the football team manager was looking for an opponent. Urschel saw connections between chess and football - thinking ahead about the other guy's next move, blocking out distractions, having a plan B.

It wasn't long before Urschel was watching both SportsCenter and ChessCenter, an online chess news show that airs on Chess.com. And now, three seasons into his NFL career, the notoriety of being a professional football player/math PhD student/chess player has turned him into a peculiar celebrity.

Urschel is the "advanced stats columnist" for the Players Tribune, an online publication started by former New York Yankees star Derek Jeter that publishes first-person essays by sports stars. He posts a math quiz every Wednesday. Last week, the questions included "What is the smallest positive integer not definable in fewer than twelve words? (No hyphens!)"

Good luck figuring the answer out before Urschel provides it a week later. The explanations sometimes run several paragraphs.

Ravens fans are proud of their genius lineman. One fan even mailed him a physics textbook. Urschel, who reads math books to relax, wishes more fans would send books. (If you have an advanced text you no longer need, Urschel asks that you mail it to the Ravens' training facility at 1 Winning Drive, Owings Mills, Maryland, 21117. He promises to read everything).

In chess, Urschel has been invited to play against some of the country's best players, including a charity event this spring against Fabiano Caruana, the third-highest-rated player in history. Urschel resigned less than four minutes into the game.

But he got to hang out with Caruana and Robert Hess, a prodigy who earned his grandmaster title at 17 while playing football at Stuyvesant High School in New York.

"He was actually more excited to meet me than I was to meet him," Hess said. "It's just unbelievable how much he loves chess."

Urschel was game. He took black. The hustler took white.

"Big man coming to play," the hustler said, as Urschel made a move. The hustler's other commentary consisted of "Mmmm" and, "That's a good move, fella."

It did not go that well at UMBC, where the match between Urschel and the Belgian Butcher was arranged by The Washington Post. It was not exactly a fair fight. Urschel has a provisional rating of around 1600 - good, but not grandmaster great. Ringoir's rating is a much-better 2496.

Even so, Urschel took it about as seriously as a Sunday NFL game. A few hours before the match, Urschel FaceTimed with Hess, going over potential openings.

The lineman lost the first game but commanded the butcher's respect.

"There were some moves I was impressed by," Ringoir said.

They decided to play again.

It was silent for a while. They went back and forth. The butcher cracked a smile.

"What?" the lineman said.

"I'm getting the bishop, so I'm very happy," the butcher said.

"Can you show me where I went astray?" he asked.

They put the pieces back on the board, setting up an instant replay in slow motion.