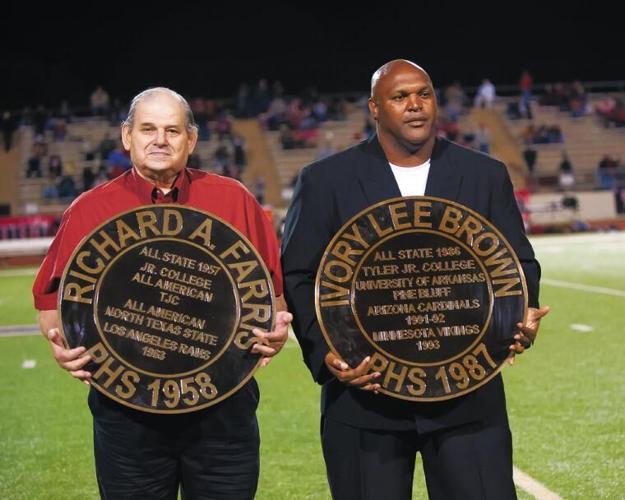 Palestine football legends Richard Farris, left, and Ivory Lee Brown, right, were inducted onto the PHS Wall of Honor during homecoming festivities in 2014. Mr. Farris passed away on Monday. 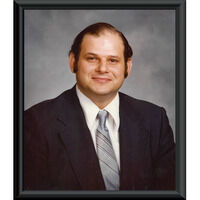 Palestine football legends Richard Farris, left, and Ivory Lee Brown, right, were inducted onto the PHS Wall of Honor during homecoming festivities in 2014. Mr. Farris passed away on Monday.

Richard Farris Sr., an All-America guard and linebacker who led Tyler Junior College to its only national football championship, passed away on Monday in Tyler. He was 82.

Services are scheduled for 2 p.m. on Saturday at St. Philip’s Episcopal Church in Palestine. A visitation will be held from 5:30-6:30 p.m. on Friday at Bailey & Foster Funeral Home in Palestine.

Before helping the Apaches to the 1960 National Junior College Athletic Association football championship, Mr. Farris was an all-state and All-America guard/linebacker at Palestine High School.

He graduated in 1958 and was named All-America for the 1957 season as well as being tabbed Class Favorite.

Mr. Farris received the Palestine Herald-Press Athletic Award for the 1957-1958 school year. He was inducted into the Palestine Wall of Honor in 2014.

He was recruited by Coach Bear Bryant and attended Texas A&M for one year before transferring to TJC.

At Tyler Junior College he was Junior College All-America as a guard/linebacker and was named the conference’s Most Valuable Player. Mr. Farris helped lead the Apaches to the 1960 national championship. TJC was 12-0 during the regular season and was invited to the Junior Rose Bowl in Pasadena, California. Although the Apaches lost to Long Beach City College, 38-16, TJC was awarded the national title before the postseason game.

In 2009, Mr. Farris was inducted into the TJC Sports Circle of Honor.

In 2018, the TJC 1960 championship team received a Special Recognition Award from the TJC Alumni Association. This award recognizes an individual or a team of individuals for their outstanding professional achievements, contributions to society, and/or service to their community thus bringing honor to the College.

In the 1962 NFL Draft he was selected by the Los Angeles Rams as the 100th overall player and the second pick of the eighth round. Mr. Farris was also selected in the 23rd round (184th player) by the San Diego Chargers in the 1962 AFL Draft, but chose to play for the Rams.

After his professional career, he returned to his beloved hometown of Palestine. He helped develop and grow the family real estate business.

Mr. Farris was President of the Shriners Club for many years, a Kiwanis Club member, a 32nd degree Mason with Waco consistory and served 39 years as a reserve sheriff’s deputy.

He was born on Sept. 10, 1939 to Louis and Victoria (Gani) Farris. He passed away on Monday at Hospice of East Texas in Tyler after a battle with cancer.

He was preceded in death by his parents and his brother Louis A. Farris. He is survived by his wife of 49 years Beverley Roberts Farris; daughter Melanie J. Jeffery and husband Will; son Richard A. Farris Jr. and wife Tara; brothers Robert Farris and Michael Farris; and grandchildren Asa Davidson, Olivia Bernardon, Brayden Sanchez, Micah Farris and Aliyah Farris.

The Reverend Ted Welty will conduct the service on Saturday. Burial will follow in the Syrian Cemetery. A Memorial Celebration will be held at Old Magnolia after burial.