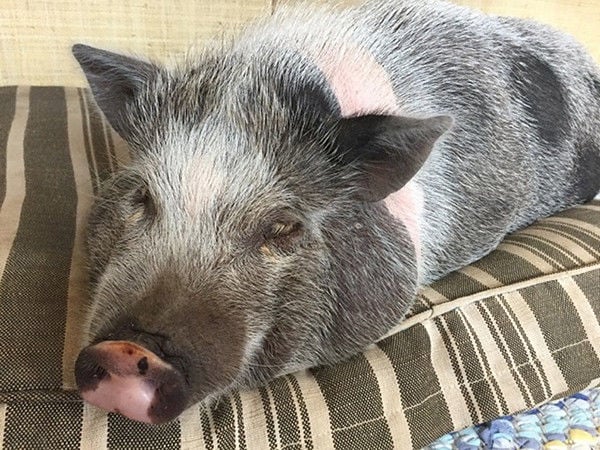 Nigel, a teacup pig with a big appetite, got even hungrier after eating peanut butter cookies that contained marijuana. (Family photo) 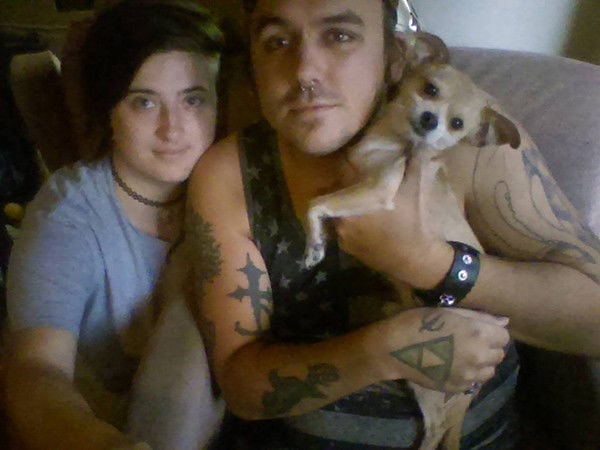 Anson Graves and his girlfriend, Tina Pontiff, were amused - and then afraid - after Rusty found and ate a pot brownie. (Anson Graves) 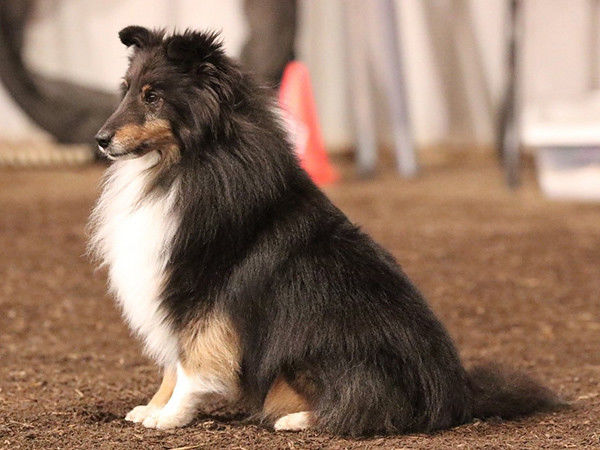 Star, a 6-year-old sheltie from Oregon, spent a night at the vet after getting into a supply of marijuana. (Susan Fry)

Nigel, a teacup pig with a big appetite, got even hungrier after eating peanut butter cookies that contained marijuana. (Family photo)

Anson Graves and his girlfriend, Tina Pontiff, were amused - and then afraid - after Rusty found and ate a pot brownie. (Anson Graves)

Star, a 6-year-old sheltie from Oregon, spent a night at the vet after getting into a supply of marijuana. (Susan Fry)

Star, a petite 6-year-old sheltie who competes in dog agility shows, almost missed a contest this month. She had spent the previous night at the vet, totally stoned on pot.

Her drug trip was an accident. Star lives in Oregon, where recreational use of marijuana became legal last year. Her owner's husband had left some loose-leaf pot on the dining room table, and Star got curious. That was days after her sister, Kicker, gobbled up a pot-infused hard candy she found in the car, leaving her wobbling and incontinent. A veterinarian gave both dogs activated charcoal to absorb the toxin, which contributed to nearly $3,000 in medical bills and caused Star to poop in the ring during her competition.

"It was a bad week," said the dogs' owner, Susan Fry, of South Lebanon, Ore.

But it was probably a fairly routine week for the clinic that treated the dogs. As more jurisdictions legalize marijuana, veterinarians across the country say they are seeing a sharp increase in cases of pets accidentally getting high. Tasty "edibles" such as muffins and cookies that people consume for a buzz are also appealing to animals, who can't read warning labels, and, in the case of dogs, rarely stop at just one pot brownie.

"Dogs used to kind of chew on the stash growing in the basement. Now they're finding a big bag of gummy bears," said Heidi Houchen, a veterinarian at VCA Northwest Veterinary Specialists in a suburb of Portland, which treats a few marijuana cases a week. "Dogs are Hoovers. Dogs are the rock eaters."

These incidents, which are rarely fatal, have driven a 330 percent increase over the past five years in calls about pets on pot to the Pet Poison Helpline, said Ahna Brutlag, a veterinary toxicologist who is associate director of the Minnesota-based animal poison control center. Two-thirds of the calls involve marijuana edibles, and nearly all involve dogs, she said. Veterinarians also cited examples of chihuahuas lapping up bong water, cats being exposed to vaping, and even rabbits, ferrets and birds getting accidentally stoned.

In the year after pot became legal for recreational use in Oregon, DoveLewis, a large emergency veterinary clinic in Portland, saw a 63 percent increase in marijuana toxicity cases despite a client base growth of just 7 percent, said Alaina Buller, a clinic spokeswoman. Those findings echoed the results of a 2012 study that found such cases quadrupled at two Colorado veterinary clinics in the five years after medical marijuana was legalized in that state.

As several YouTube videos illustrate, baked pets look a lot like really high people: Glassy-eyed, teetering, lethargic and pretty pathetic. In the case of Nigel, a 1-year-old pet teacup pig who was vacationing with his family in Nantucket this summer, it led to a serious case of the munchies. One member of the family - none of whom would agree to be identified in this article - had recently been in Colorado, where he had acquired pot peanut butter cookies that were in his backpack. Nigel, who was described as having a voracious appetite when sober, rooted them out and left the empty package as evidence.

"Very soon, we had a very stoned pig on our hands," said one witness, a 54-year-old writer who lives in New York City. "He's just wandering around the kitchen desperate for food, doing a lot of whining and oinking. Then eventually, he just passed out."

Animals can sleep off a marijuana high in many cases, according to veterinarians interviewed, all of whom said they immediately suspect the substance when an incontinent pet shows up. Other common toxins, such as caffeine or pesticides, can be far more dangerous. But veterinarians say there's growing concern about the increased potency of today's marijuana edibles, many of which are made with butters or oils infused with highly concentrated tetrahydrocannabinol, or THC. Many also contain chocolate, which can be fatal to dogs.

Marijuana ingestion by animals can lead to vomiting, racing or slowed heart rates, tremors or even seizures. Veterinarians said it is usually treated by inducing vomiting or administering intravenous fluids or anti-nausea medications. In some cases, medications to control heart rates or tremors are necessary.

"Most of them just need a night of detox," said veterinarian Shawn Thomas, who owns Tanasbourne Veterinary Emergency near Portland. The worst cases, Thomas said, involve owners who have also partaken. He recalled one standard poodle that was hospitalized for more than two days after devouring THC-infused butter. Its owner, Thomas said, didn't quickly realize the dog was suffering because "he was blitzed out of his mind, too."

"Ten years ago, we would have told you there's no chance your dog is going to die of this," he said. "But now, I tell people, it's so much stronger, and you have a four-pound Chihuahua and it could die."

Anson Graves, whose three-pound Chihuahua mix ate most of a pot brownie in August, said he really started to worry when the dog still could not walk 12 hours later. Rusty had fallen under the influence - accidentally, according to Graves, a 25-year-old waiter -- amid the revelry of Bourbon Street in New Orleans, which recently decriminalized marijuana possession. Graves and his friends had stopped for beers and cocktails known as Hand Grenades when, he said, he looked down to see Rusty inhaling a packaged brownie lying on the curb. The label indicated it contained 60 milligrams of THC, he said.

"I've had my experiences," said Graves, who lives in Patterson, La. "That's quite a bit for a dog."

Half an hour later, Rusty was so lethargic that Graves headed home. The next morning, he was "like a slinky," said Graves, who posted a video of the stoned dog on his Facebook page. He called his vet, who advised rehydrating Rusty by offering him Pedialyte. That helped, but the dog wasn't fully recovered until the fourth day, Graves said.

"He was trying to run and jump on the bed. But he'd just hit the bed," said Graves, who added that Rusty's New Orleans visits are over. "That was too much hassle."

The upshot to widening legalization and tolerance of marijuana, veterinarians say, is that pet owners now readily admit when they know their animals have consumed it. In some cases, they even acknowledge having given their pets pot for medical purposes, said Lisa Parshley, a veterinary oncologist in Olympia, Wash. Veterinarians are not allowed to prescribe medical marijuana, but Parshley said she had a client who used her own topical cannabis balm on her dog, which had end-stage cancer.

"The dog got a little drunk on the THC," said Parshley. "I convinced her to reduce the dose, and darn if the dog didn't do well for almost another month."

Veterinarians say the biggest lesson from the increase in stoned pet patients is an obvious one: Pot, like any potentially dangerous substance, needs to be kept out of a pet's reach.

Fry said she's now enforcing that with her husband, John, who she said began using marijuana when he contracted multiple sclerosis 30 years ago - before it was legal in Oregon. He "isn't noted for being a super clean guy," she said, explaining why he'd left the candy in the car cupholder and the pot on the dining room table.

Kicker, the candy-eater, had a particularly strong reaction that left Fry - who said she tried marijuana once and was not a fan - in tears and worried she would lose the "feisty little thing."

But both dogs bounced back - Star so well that she performed two of her agility events flawlessly just two days after her inadvertent overdose. Next month, both dogs are competing at a national event in Arizona where, luckily for them, there are no drug tests.

Karin Brulliard is a national reporter who runs the Animalia blog. Previously, she was a foreign correspondent and a local reporter.