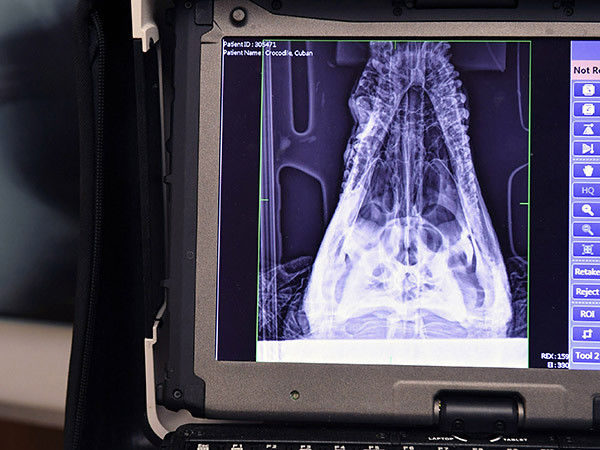 An X-ray of Dorothy's head gives doctors at the National Zoo a look at the extent of her injury. (Photo by Matt McClain, The Washington Post) 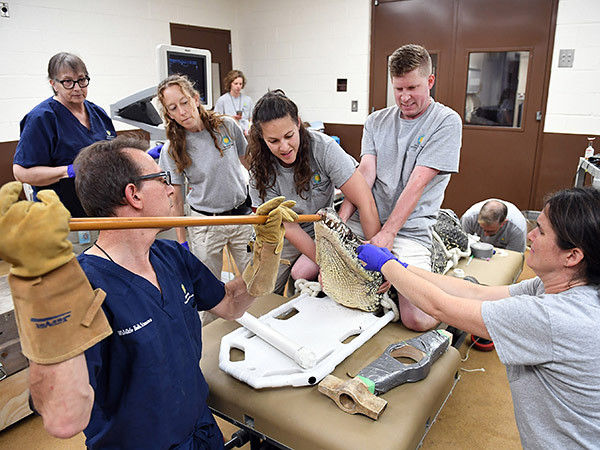 Don Neiffer, left, and other workers at the Smithsonian National Zoological Park try Wednesday to pry open the jaws of a Cuban crocodile before the surgery to repair a wound in her jaw. (Photo by Matt McClain, The Washington Post) 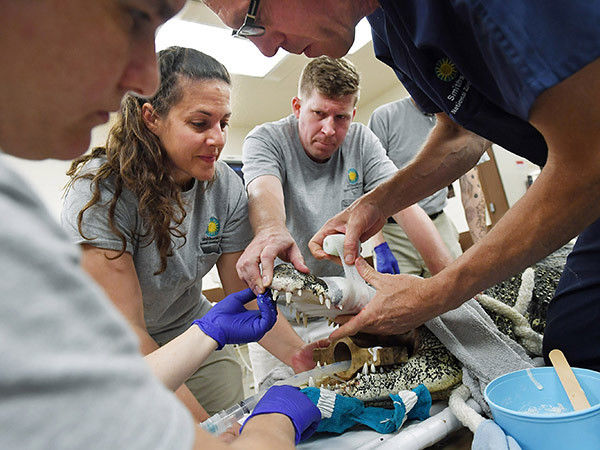 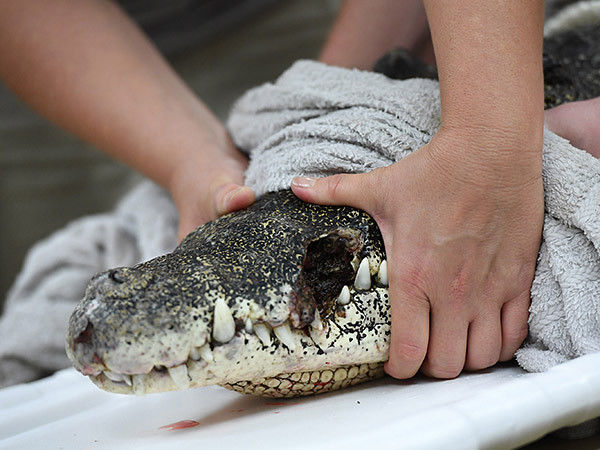 Repairing this crocodile's mouth required ropes and a broom handle to get her mouth opened so that the team could begin work on the injury. "This is ugly and dirty," veterinarian Don Neiffer said. (Photo by Matt McClain, The Washington Post)

An X-ray of Dorothy's head gives doctors at the National Zoo a look at the extent of her injury. (Photo by Matt McClain, The Washington Post)

Don Neiffer, left, and other workers at the Smithsonian National Zoological Park try Wednesday to pry open the jaws of a Cuban crocodile before the surgery to repair a wound in her jaw. (Photo by Matt McClain, The Washington Post)

Repairing this crocodile's mouth required ropes and a broom handle to get her mouth opened so that the team could begin work on the injury. "This is ugly and dirty," veterinarian Don Neiffer said. (Photo by Matt McClain, The Washington Post)

Dorothy the Cuban crocodile has been anesthetized for three hours. National Zoo veterinarians have patched the hole in her jaw that she got in a fight with another croc. And now they're going to give her a shot that will help wake her up.

But caution is in order. Dorothy has a mouthful of jagged teeth, a wicked underbite, and her species is notoriously irritable and athletic. Cuban crocodiles can run on land and leap from the water to grab prey from tree branches.

Chief veterinarian Don Neiffer warns his staff that he is about to give the shot. Dorothy's mouth is being held open by a wooden "bite block." (Her jaws are so powerful that it had taken several people with ropes and a broom handle to pry them open.)

Assistant curator Matt Evans and keeper Lauren Augustine sit astride the crocodile, as if on a log, just in case. "Everybody, I'm giving reversals," Neiffer calls out, as he administers the shot to reverse the effect of the anesthesia.

But Dorothy is quiet. The staff slides her back into the padlocked wooden transportation crate where she can recover safely. And the procedure on the critically endangered reptile is finished.

Over much of Wednesday morning, in an operating room at the zoo's animal hospital, experts got a chance to work on Dorothy's injury and get a rare, up-close look at an exotic animal they dare not approach unanesthetized.

The room was filled at one point with 16 people, while others watched from an adjacent corridor.

"We've never had our hands on one of these before in our lives," said Michael Maslanka, head of the zoo's department of nutrition science. "I've been doing this for 20 years. ... So we're kind of feeling things for the first time."

Dorothy, 58, is eight-feet-long and weighs about 165 pounds. She had been in several fights over the past few weeks in her enclosure with another Cuban crocodile named Blanche, the zoo said.

Both were named after characters in "The Golden Girls," a TV sitcom from the late 1980s and early 1990s.

Both had suffered minor injuries, but Blanche had managed to bite a golf-ball-size hunk out of Dorothy's left jaw.

Zoo veterinarians feared that the wound had made a hole through the bone where Dorothy might aspirate water and then contract pneumonia. The plan was to treat the wound, and find and plug the hole with cement.

Cuban crocodiles are mainly found in the swampy wilderness of southwestern Cuba, the zoo said, and are threatened by, among other things, hunting and changes in habitat. The zoo has nine Cuban crocodiles, with six of them on exhibit.

Crocodiles differ in appearance, temperament and distribution from alligators, which are found chiefly in the United States and China. Crocodiles have more narrow snouts, tend to be more aggressive and are more widely distributed than alligators.

Dorothy was first anesthetized with a syringe a little after 7 a.m. and taken to the zoo's hospital in the transportation box, which was carried in a van.

Before the staff extracted her from the box, veterinarians had to make sure she was asleep. Upon arrival, Neiffer nudged her with a pole to see if she reacted. She did.

"Because she'll bite me," he said.

After the crocodile was sufficiently sedated, Neiffer prepared to pull her out of the box by the tail.

As he did, veterinarian Jessica Siegal-Willott cautioned bystanders to watch out for the potential "arc" of danger should Dorothy suddenly thrash her head or tail. "I want you outside that arc," she said.

At one point, Dorothy jerked, and the staff jumped. More anesthesia was administered. At 8:59, Neiffer pulled her out. Keepers placed her on a rescue board and put a towel over her eyes. Her jaws were tied and taped shut.

As they prepared to lift her onto the operating table, Neiffer said, "if she starts to thrash, [put her] back down."

Up on the table, the vets got a good look at the wound. "This is ugly and dirty," Neiffer said. Keepers cut the restraints off the crocodile's mouth, and Neiffer donned a pair of heavy protective gloves to try to get Dorothy's jaws open.

Eventually, the vets and keepers got Dorothy's mouth open, inserted a breathing tube and the bite block, and addressed the injury.

Veterinarian Katharine Hope cleaned out the wound with cotton swabs. Asked if she had ever had her hands in a crocodile's mouth before, she said: "Not one this big."

Neiffer prepared a mix of pasty antibiotic bone cement and used a tongue depressor to apply it to the wound. He then added some bandages and wrapped the animal's upper jaw in gauze tape to hold it in place.

As he worked, Neiffer reminded the staff that Dorothy was now heavily anesthetized: "She's very deep, so we just need to be breathing for her and watching her heart rate."

As he spoke, a heart monitor beeped in the background, and veterinary technician Marilyn Small called out "breath" each time she squeezed the breathing bag connected to the crocodile.

When the procedure ended at about 11 a.m., Neiffer sat on the floor by Dorothy's head as she rested in the open box.

He said the bone cement and the bandage would probably bother the crocodile. "She's not going to like it, but it should not preclude her from eating," he said.

Dorothy's diet, by the way, consists of deceased rabbits, which come frozen and are thawed for crocodile consumption.

"The hope is that [the procedure] will allow the wound to ... close and heal," he said. "At the best case, she's going to have a scar there."

But even if the cement pops out, he said, and she has a "divot that's covered up with healthy tissue otherwise and the hole is [closed], we're gold."

Dorothy will probably not return to her quarters with Blanche, the zoo said.