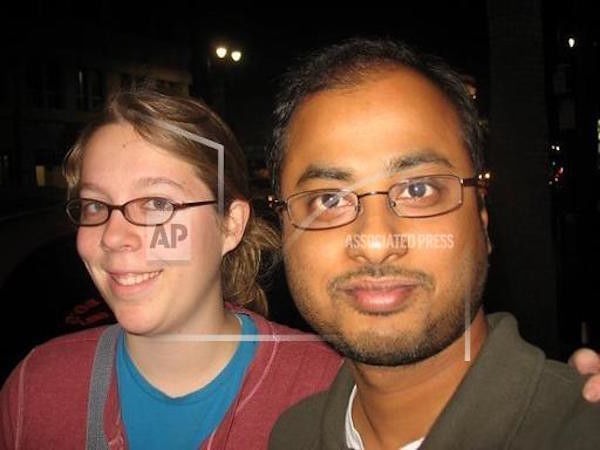 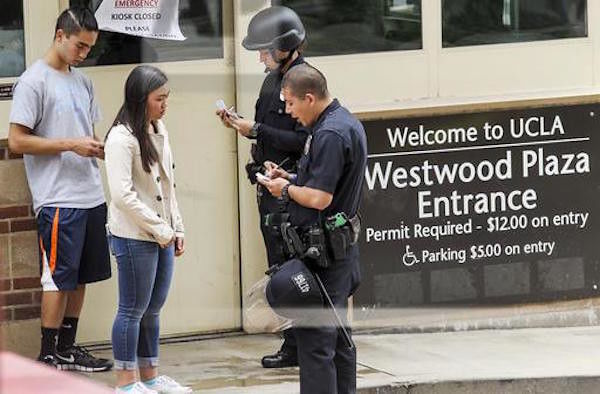 Police officers get information from the student at the scene of a fatal shooting at the University of California, Los Angeles, Wednesday, June 1, 2016, in Los Angeles. (AP Photo/Ringo H.W. Chiu)

Police officers get information from the student at the scene of a fatal shooting at the University of California, Los Angeles, Wednesday, June 1, 2016, in Los Angeles. (AP Photo/Ringo H.W. Chiu)

LOS ANGELES (AP) - The Latest on a murder-suicide at UCLA (all times local):

Hundreds of students have gathered at UCLA to remember a professor who was shot and killed by a former student, who then took his own life.

The crowd gathered for a vigil Thursday night in Bruin Plaza, where the base of the bear mascot statue was covered with colored notes paying tribute to William Krug.

The 39-year-old professor was shot in a campus office Wednesday by one of his former students, Mainak Sarkar, who then turned the gun on himself.

Sarkar claimed Klug had stolen his computer code. Los Angeles Police Chief Charlie Beck says Sarkar was mentally unstable and the theft was all in his mind.

Authorities say days before the shooting, Sarkar also shot and killed his estranged wife in Minnesota.

The grandmother of the slain wife of the UCLA gunman says the two of them "just didn't get along."

Jean Johnson, grandmother of Ashley Hasti, told the Minneapolis Star-Tribune that her granddaughter and Mainak Sarkar split about a year after they married in 2011, and she moved back to her hometown of Brooklyn Park, Minnesota.

Johnson said the two didn't get a divorce because Hasti couldn't afford one.

Johnson says Hasti was in medical school at the University of Minnesota and expected to graduate in spring.

She says Sarkar was the only enemy her granddaughter had.

Authorities say Sarkar shot and killed a professor at UCLA on Wednesday and later found a "kill list" he had made.

A law enforcement official with knowledge of the investigation tells The Associated Press Hasti was on the list.

The official was not authorized to publicly discuss the case and spoke on condition of anonymity.

The wife of a UCLA professor gunned down in his campus office says she'll miss him every day for the rest of her life.

Mary Elise Klug released the statement Thursday via UCLA a day after her husband, engineering professor William Klug, was shot and killed.

Klug says she is grateful for the outpouring of support from UCLA and elsewhere for what she calls an indescribable loss.

She says Klug was so much more than her soul mate and knowing so many others share her sorrow has provided comfort.

She asks that her family's privacy be respected so they can mourn.

A campus vigil for Klug will be held later Thursday night.

A law enforcement official says the Minnesota woman on the UCLA gunman's "kill list" was Ashley Hasti, and documents show they were married.

Following Wednesday's UCLA shooting that left one of the professors and Sarkar dead, police went to the woman's home in Brooklyn Park, Minnesota, and found her dead.

Police would not disclose the woman's name.

However, a law enforcement official with knowledge of the investigation said the name on the kill list was Hasti, and a neighbor told The Associated Press that Hasti lived in the home with her father.

The official was not authorized to publicly discuss the case and spoke on condition of anonymity.

The neighbor, Gordy Aune Jr., is the neighborhood watch commander and said he sometimes spoke with the Hastis on his walks. He described them as quiet.

Records in Hennepin County, Minnesota, show Hasti married Sarkar in 2011. It's not clear if they still were married.

The man who carried out the UCLA murder-suicide wrote a dissertation in which he thanked the professor he fatally shot.

The 2013 dissertation by Mainak Sarkar includes two lines about professor William Klug. It says: "I would like to thank my advisor, Dr. William Klug, for all his help and support. Thank you for being my mentor."

The document thanks several other professors and three friends, with Sarkar saying, "I will always remember all the good time we had together."

A woman on the "kill list" was found dead in her home outside Saint Paul, and authorities say it appears she was killed before the UCLA shooting.

The Los Angeles police chief says a note about a cat at the scene of the UCLA murder-suicide led to the discovery of a so-called kill list and a dead woman's body in Minnesota.

The note was found Wednesday after Mainak Sarkar killed engineering professor Bill Klug and then himself in Klug's office.

Beck says the note requested that the finder check on a cat at Sarkar's residence in St. Paul, Minnesota.

At the residence, investigators found a so-called kill list with the names of two professors and a woman living in Brooklyn Park outside St. Paul.

Local police found the woman's body and believe she was killed before the UCLA shooting.

Police believe Sarkar also intended to kill the other professor, who was off campus at the time.

The Los Angeles police chief says investigators believe the man who carried out the UCLA murder-suicide went to the campus to kill two professors.

Chief Charlie Beck says the second professor was off campus Wednesday when Mainak Sarkar (MY'-nahk SUR'-kahr) arrived armed with two guns and many rounds of ammunition.

Sarkar killed engineering professor Bill Klug and then killed himself.

Beck says the other professor's name turned up in a "kill list" discovered in Sarkar's Minnesota residence.

A woman also named on that list was found dead early Thursday of an apparent gunshot at her Minnesota home.

A blog post that appears to be written by a man who carried out a murder-suicide at UCLA calls the victim of the crime a "sick guy."

The blog, posted in March by a man identifying himself as Mainak Sarkar (MY'-nahk SUR'-kahr), says he and UCLA Professor Bill Klug had personal differences.

The blog accuses Klug of stealing Sarkar's intellectual property and giving it to another student and says "he made me really sick."

It ends with: "Your enemy is your enemy. But your friend can do a lot more harm. Be careful about whom you trust."

Los Angeles Police Chief Charlie Beck told KTLA-TV on Wednesday that the motive of the UCLA shooting was tied to Sarkar's belief that Klug released his intellectual property. Beck says UCLA asserts it was all in Sarkar's imagination.

Family and friends of Klug describe him as a kind, gentle man who didn't appear to have conflicts with anyone.

Police in Brooklyn Park, Minnesota, say they found a dead woman when Los Angeles police asked them to conduct a welfare check at a local address in connection with the UCLA murder-suicide investigation.

The statement says early indications are that the woman's shooting happened before the UCLA shooting, which occurred at midmorning Wednesday.

The Los Angeles police chief says the man who carried out a murder-suicide at UCLA left a "kill list" at his Minnesota home that led authorities to find a woman's dead body.

Beck says when authorities searched Sarkar's home in Minnesota, they found a "kill list" with the names of Klug, another UCLA professor and a woman.

Beck says the woman was found shot dead in her home in a nearby Minnesota town. The other professor on the list is all right.

Beck says it appears that mental issues were involved and says Sarkar's dispute with Klug appears to be tied to Sarkar thinking the professor released intellectual property that harmed Sarkar.

Police are asking the public's help to find the car Sarkar drove to Los Angeles, a 2003 Nissan Sentra with the license plate of 720KTW.

Los Angeles police have identified the man they say carried out a murder-suicide on the UCLA campus.

Sarkar gunned down mechanical engineering professor William Klug in an office Wednesday before taking his own life.

The shooting triggered a huge police response until authorities determined there was no continuing threat.

Classes are resuming Thursday except for the engineering department, which will reopen next week.