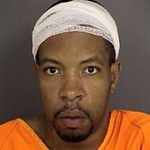 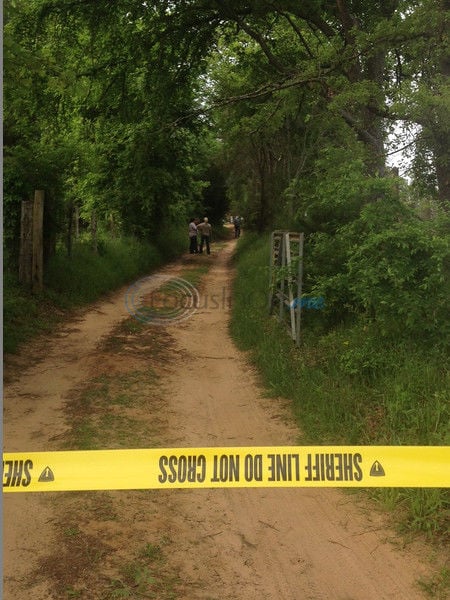 FAITH HARPER/STAFF Cherokee County Sheriff deputies man the scene of a homicide Sunday afternoon after the body of Kayla Nicole Thompson, 27, was found by her mother.

FAITH HARPER/STAFF Cherokee County Sheriff deputies man the scene of a homicide Sunday afternoon after the body of Kayla Nicole Thompson, 27, was found by her mother.

A Cherokee County man was in jail Monday and facing a murder charge in the stabbing death of his wife, a mother of four children.

Kayla Nicole Thompson, 27, was found dead Sunday in the driveway of her home in the 1500 block of County Road 3201, west of Lake Jacksonville at 9:35 a.m., according to a statement from the Cherokee County Sheriff's Office.

Her body was discovered by her mother, who was going to the house to check on the family after other relatives were unable to reach Mrs. Thompson for several hours to notify her that they took her husband, 34-year-old Cedric Dewayne Thompson, to a hospital near Kilgore.

Thompson was taken there for treatment after he called family members that morning and said he wanted to hurt himself.

Several other neighbors also came to help, and several calls were made to 911, according to police.

EMS and sheriff's office deputies were called to the scene, and Precinct 4 Justice of the Peace Vera Foreman pronounced Mrs. Thompson dead at the scene. Her body was sent to Dallas for autopsy.

The children were found still in the home and appeared to be physically unharmed, according to police.

The children were locked into a room without food, water or access to a bathroom overnight, she said.

She said by the time, she made it into the home to check on the children, they already had been released from the room, and the oldest girl was trying to calm the younger ones.

"The big sis saw their Easter stuff, (and she was) doing their Easter baskets to help calm them down a little bit," Ms. Morris said.

The children were released to the custody of their grandparents and later interviewed by staff at the Crisis Center in Jacksonville, according to police.

Deputies and investigators remained at the Thompson residence until after 6 p.m. Sunday while other investigators obtained search warrants for the vehicle Cedric Thompson was driving and an arrest warrant for his arrest.

About 2 p.m., a Cherokee County deputy, with the help of Longview police, arrested Cedric Thompson on a charge of first-degree murder. Precinct 3 Justice of The Peace Phillip Grimes signed the warrant.

Cedric Thompson went before a Kilgore magistrate and taken back to Cherokee County Jail before 6 p.m. Sunday night, according to police. His bond was set at $1 million.

Cedric Thompson's car was found at a residence south of Marshall on Farm-to-Market Road 31 in Harrison County. The vehicle was brought back to Cherokee County around 1 a.m. Monday.

The sheriff's office declined to release details of Mrs. Thompson's injuries, or a possible motive for the crime, and final autopsy results will not be available for several weeks.