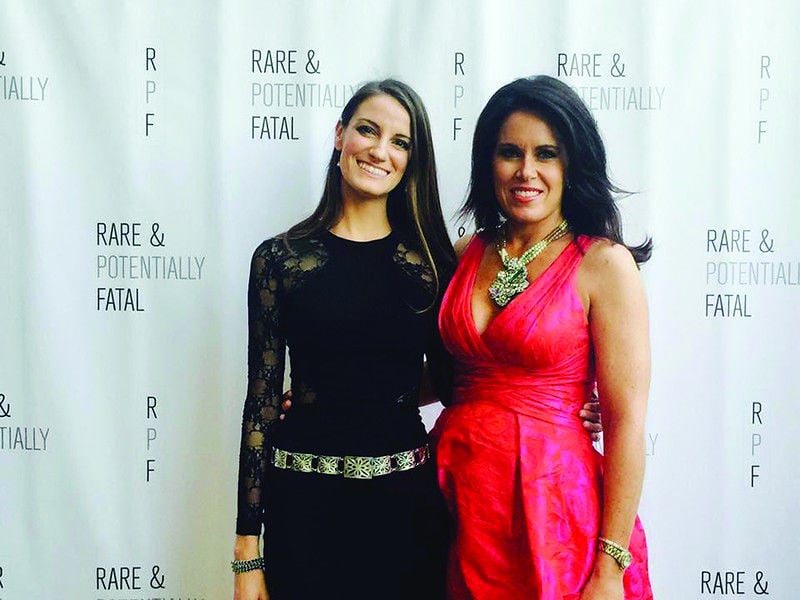 CALLYNTH PHOTOGRAPHY/COURTESY NATALIE METZGER (left), director of the film, “Special Blood” about hereditary angioedema, appears with Tyler resident Sarah Bulloch Wyrick at the world premiere of the movie in July in San Diego. Both women have the rare genetic disorder.

CALLYNTH PHOTOGRAPHY/COURTESY NATALIE METZGER (left), director of the film, “Special Blood” about hereditary angioedema, appears with Tyler resident Sarah Bulloch Wyrick at the world premiere of the movie in July in San Diego. Both women have the rare genetic disorder.

When Tyler resident Sarah Bulloch Wyrick was 31, she learned she has a rare genetic disorder - hereditary angioedema or HAE.

Ms. Wyrick had suffered from severe swelling of her hands and feet in high school, and had been fighting the symptoms for years. According to Ms. Wyrick, after finally having answers and an accurate diagnosis, she felt relief but was compelled to become more educated on the disease.

“The best way I know how to describe the disease is spontaneous swelling even without trauma to the body part or organ,” Ms. Wyrick said. “The swelling is so severe, it cracks the skin.”

The condition is not well known or easily diagnosed, but after becoming an ambassador for a pharmaceutical company and traveling for work, Ms. Wyrick began to network and meet other sufferers of HAE and became increasingly interested in continuing her connections with other patients and their families. Along the way, she learned a documentary was being filmed about the condition and was able to attend the world premiere of the film, “Special Blood,” in San Diego. While there, she met the director, Natalie Metzger, who also has HAE.

“I had the idea to make a film back in 2008, but couldn’t begin that process until I graduated from grad school in 2011,” Ms. Metzger said, adding that the process of finding the cast was a yearlong event. “I felt that the most important thing (was to) inform the public mainly to raise awareness of the disease and also to show diversity with the patients. Race, age and location were all important.”

The documentary follows four patients living with HAE and shows their day-to-day lives as their own bodies turn against them. The film attempts to show ways the patients have been failed by the health care system, which Ms. Metzger said is largely ignorant of their existence, and they learn to find strength in each other and their small but strong community.

Ms. Metzger was selected as one of 25 filmmakers for the CineCause Women’s Initiative - a resource to help social impact filmmakers complete their projects.

“It is important to me that this can allow the patients to know that their voices are being heard,” Ms. Metzger said. “After the world premiere, I’ve had people coming to me saying this is the first time they felt understood. The response has been gratifying.”

“There are people in East Texas with HAE , and this film will help promote awareness,” Ms. Wyrick said. “Natalie stood for everything that I speak about, and I felt it needed to come to Tyler.”

What: Special local screening of the documentary film, “Special Blood,” which chronicles patients living with angioedema

For information and tickets: www.tugg.com/events/special-blood-htkh