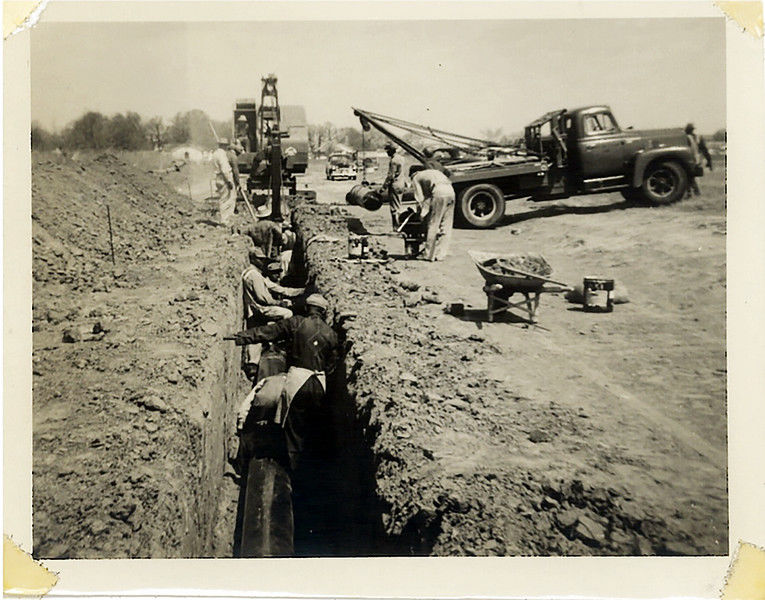 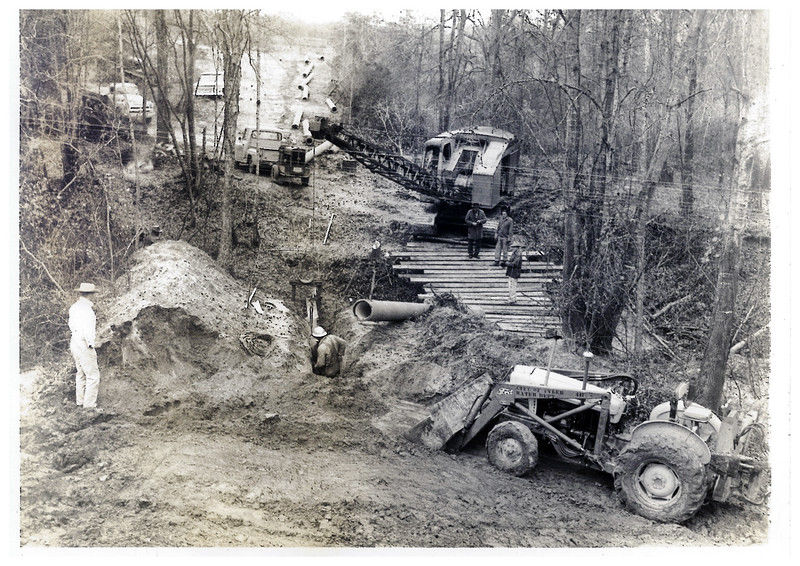 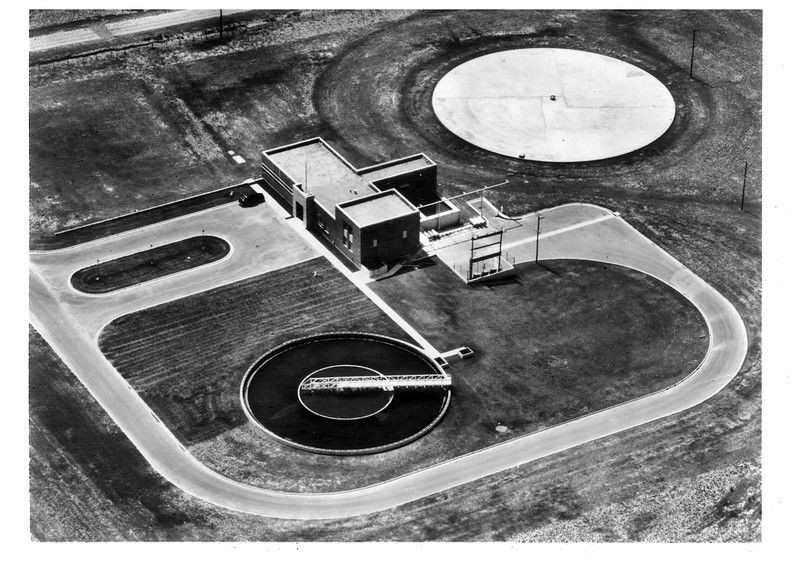 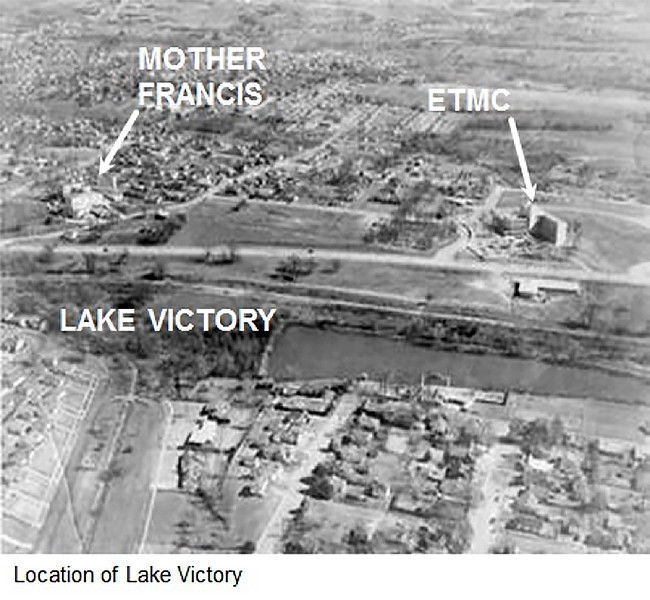 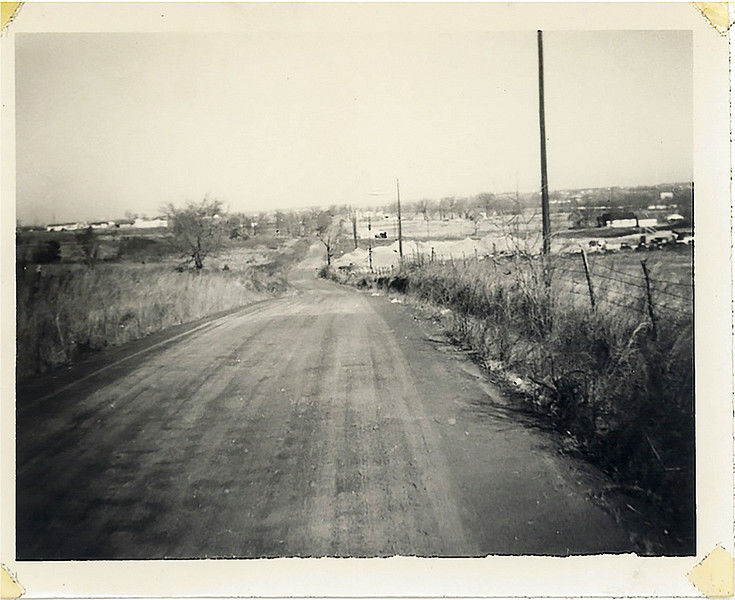 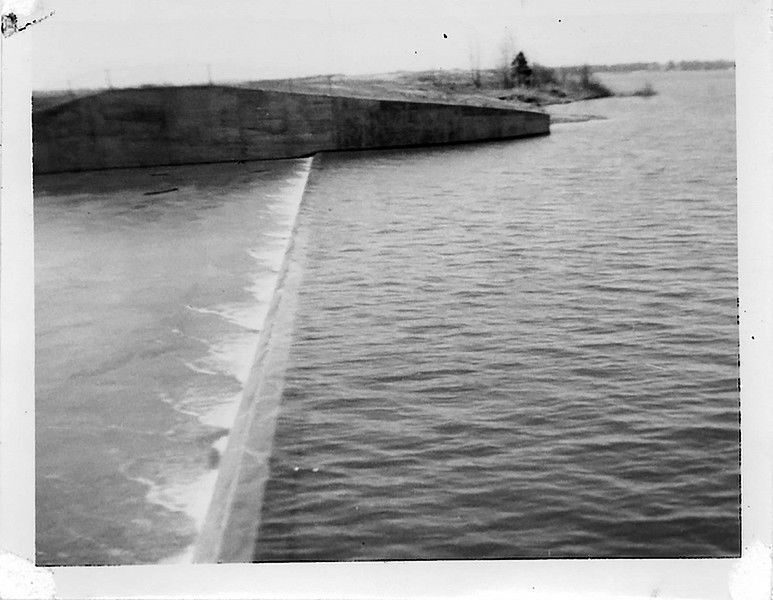 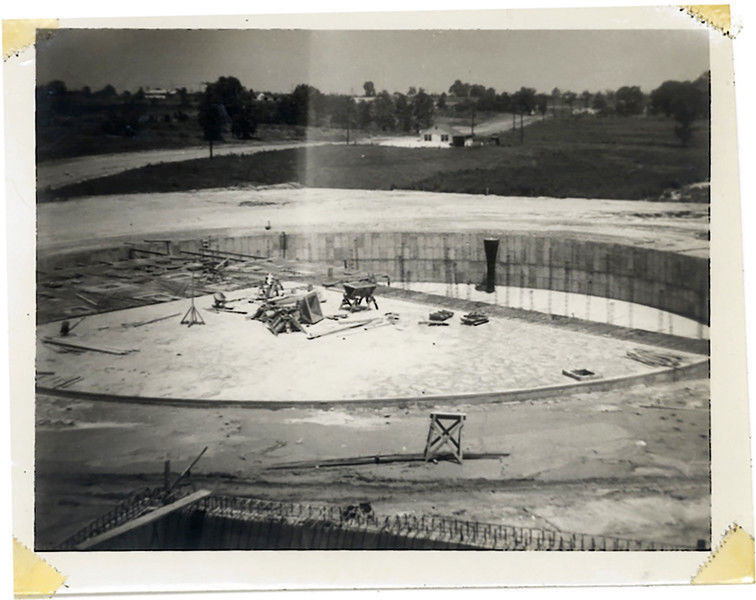 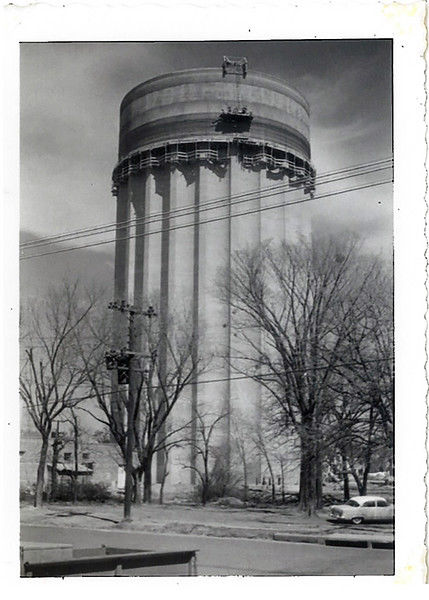 March 1958 — elevated storage tank on N. Broadway Avenue. At the time it was built, it was the largest continuous pour concrete structure west of Mississippi. Courtesy photo. 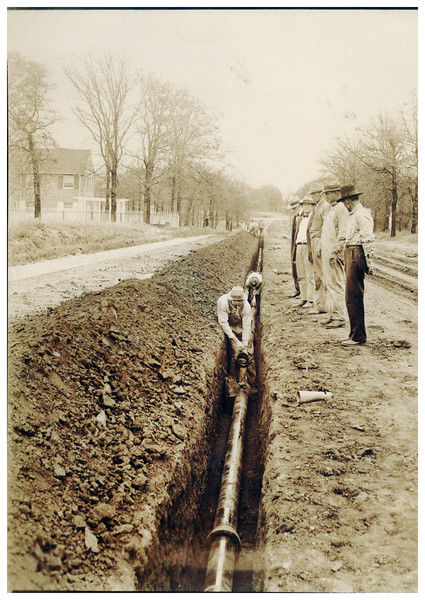 A water line is installed on Fourth Street between Broadway and Chilton in this undated file photo. 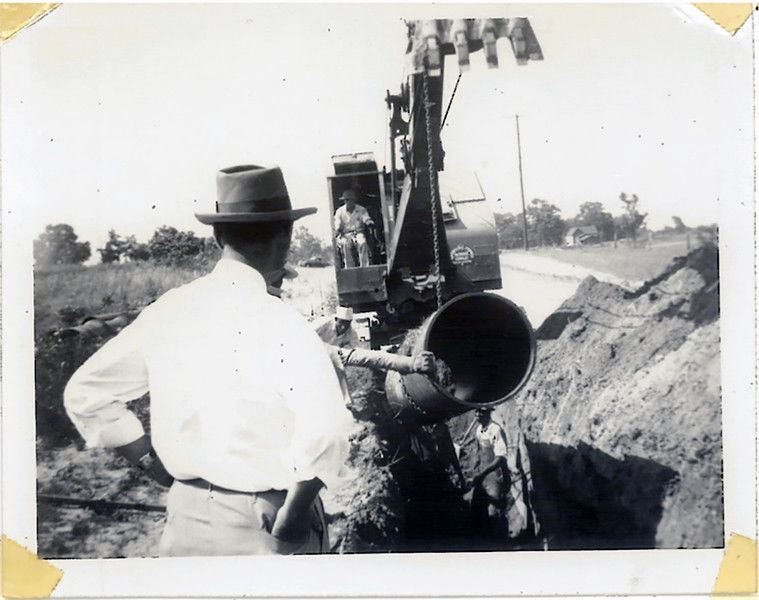 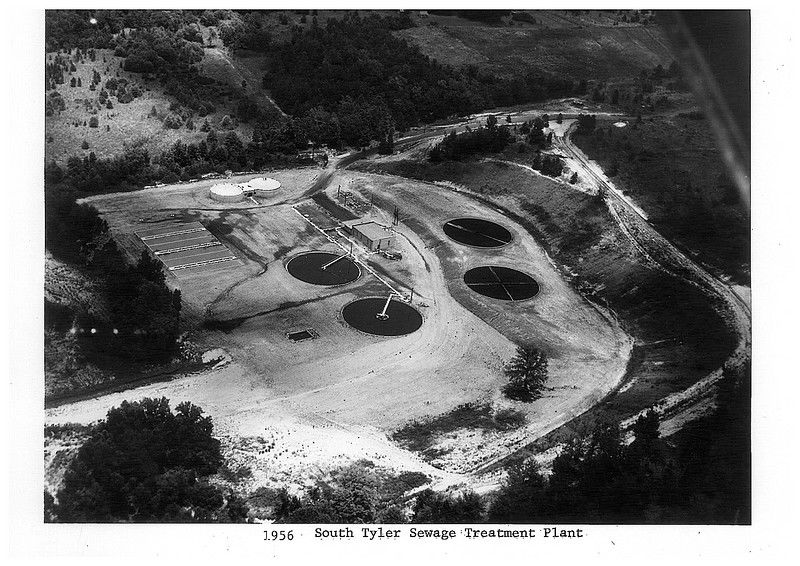 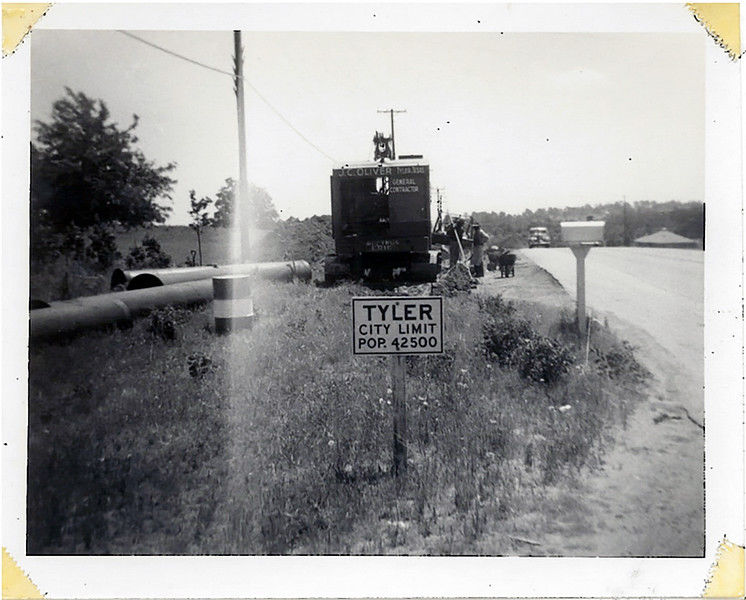 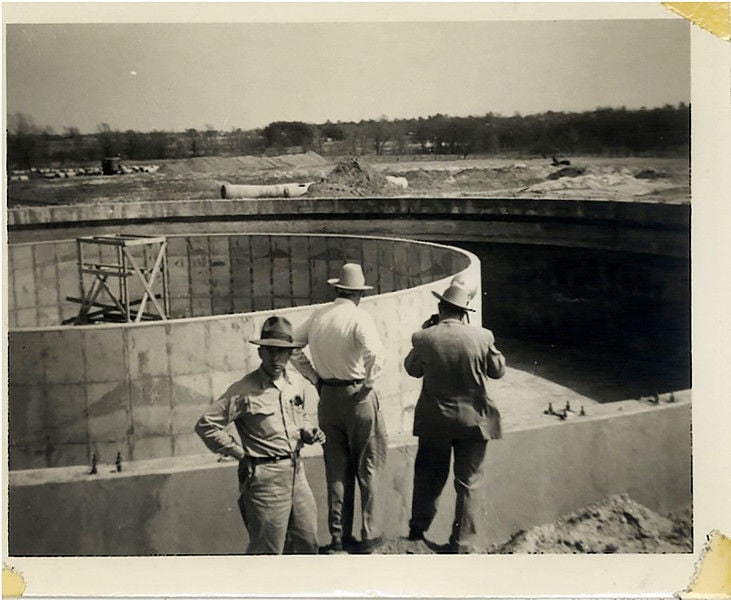 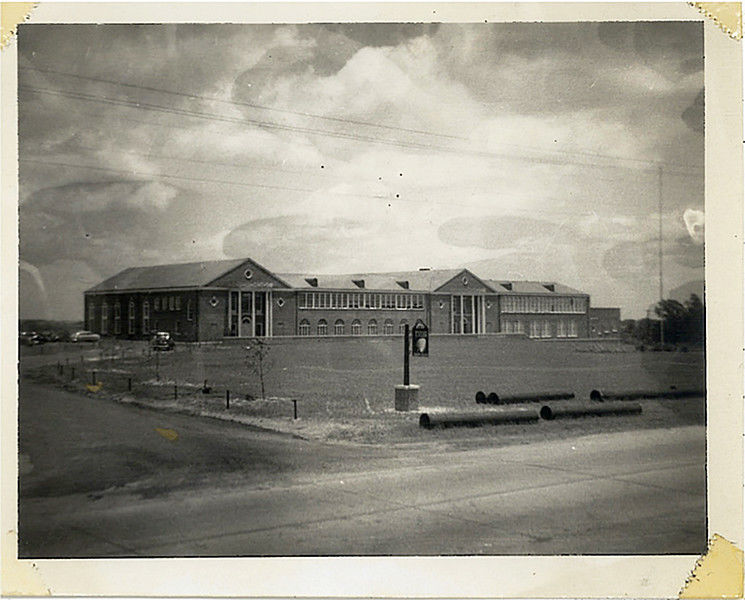 In this June 1951 file photo, 16-inch pipes for a water line are pictured at E. 5th Street in front of Tyler Junior College.

March 1958 — elevated storage tank on N. Broadway Avenue. At the time it was built, it was the largest continuous pour concrete structure west of Mississippi. Courtesy photo.

A water line is installed on Fourth Street between Broadway and Chilton in this undated file photo.

In this June 1951 file photo, 16-inch pipes for a water line are pictured at E. 5th Street in front of Tyler Junior College.

For more than 100 years, Tyler residents have been able to turn on a tap and get clean water.

Water sanitation and distribution made the modern world possible and are the reason Cholera outbreaks are a thing of the past.

“The reason we have the societies we have today and the size of population centers we have today (is because of) the sanitation of drinking water,” said Torey Nalbone, a water and air specialist and department chair of the civil engineering department at The University of Texas at Tyler.

“Prior to that, most people had wells in their yards and outhouses,” Nalbone said. “Eventually they would be contaminating their own well.”

In September 1916, the city purchased the Tyler Water Co. for $65,000. The deed included Bellwood Lake, which is still owned by the city, located near the Cascades subdivision.

The long-term benefit of the purchase and the expansion of the municipal utility is lower rates for customers, Tyler Development Manager Greg Morgan said.

“The profits go into the system as opposed to shareholders,” Morgan said, adding the ratepayers have better access to their elected officials than they do to the board member of private utility companies. That results in better control over the rates, he said.

The deed, signed in 1916, included the water distribution system, as well as the pumping and sanitation systems on the lake, which were fueled by oil. A rail line to bring raw materials to the site also was included in the deed.

The city also became the owner of a boathouse on the lake, one black horse, a set of harnesses, a spring wagon and a buggy, an electric gong and two row boats - one made of iron and the other of wood. The wooden boat is referred to as an “oil boat.”

But the city’s efforts to bring water to its residents actually started 30 years earlier.

In 1883, the city of Tyler issued bonds to build Victory Lake as a public water source, according to a history of Tyler Water Supply dated 1950. The only reminder left of the body of water is Lake Street, near where the lake was located in what is now the Midtown district, near hospitals.

The city sold the plant on Lake Victory to Tyler Water Co. in 1887, and it was that company that built Bellwood Lake in 1891. Originally the water plant at Bellwood was powered using wood.

Some of the underground distribution pipes purchased are still in use today.

“Our water system is primarily ductile iron pipe,” Morgan said. “That has given us the longevity that you don’t see in other types of materials. That’s why we have some of the lines still in service at their age. It’s because of the quality of materials.”

Some of the wastewater pipes also are still in use.

“Vitrified clay pipe (used by the city) has been around for 2,000 years,” Morgan said. “The Romans used it in ancient times, and some of that is still there.”

Bellwood Lake remained the city’s primary source of drinking water until the late ’40s. In 1946, Tyler taxpayers approved a bond to build Lake Tyler. Construction started in 1949. The water treatment facilities at Bellwood were retired and abandoned in 1965, but Tyler still owns the lake.

Today, the city treats an average of 29 million gallons of water daily, with a peak demand of 49.6 million gallons during the summer. Average production is far below the current system capacity of 72 million gallons daily. Tyler projects it will have ample water supplies to serve the city and Smith County until 2084.

Tyler Water Utilities maintains about 690 miles of sewer lines and about 630 miles of water lines.

Today, the city gets the lion’s share of its water from surface water - lakes - but it also has ground wells that can be turned on when demand gets high.

Lake Tyler was built in 1949 on Prairie Creek, a tributary of Mud Creek in the Angelina River watershed, according to a 1982 Tyler Water Utilities report.

Then came the expansion of the lake to meet demand. Construction on Lake Tyler East started in 1967. The smaller lake is connected to Lake Tyler by a channel, effectively forming one lake from a water standpoint.

The city can draw 30 million gallons a day from Lake Tyler.

The city gained rights to draw water from Lake Palestine in 1965, but its water wouldn’t be regularly used for another 40 years.

The lake is under the control of the Upper Neches River Municipal Water Authority. The city contracted to buy water rights in the 1960s, with the expansion of the Blackburn Crossing Dam, Morgan said. The dam was made taller, increasing the size of the lake.

The city paid $12.5 million for the rights, which were paid in monthly payments for 35 years. It was paid off in 2001, and wasn’t brought online until the Lake Palestine Treatment plant was constructed in 2004.

“That water was purchased 40 years ahead of it ever being needed by the city, and today we are only using half of it,” Morgan said. “That reflects the long-term commitment Tyler made to the utility system. The property the Lake Palestine Treatment Plant is on was purchased in the ’80s and was not used until 20 years later. It’s 150 acres with room to build a duplicate plant on it.”

Looking ahead, the city has interest in the proposed Lake Columbia, which would be in the Mount Selman area.

The city also is looking for places to strategically place sanitation facilities. Morgan said the city purchased about 200 acres southwest of Bullard in anticipation of eventually needing another wastewater plant. The land was purchased about eight years ago and likely won’t be needed for another two decades, Morgan said.

The hope is the plant can serve as a regional wastewater plant for Tyler, Bullard, Whitehouse and possibly Troup.

“Tyler is fortunate in that it has a water supply that is reliable and healthy to support more than the number of people in our metropolitan area. I think this is special,” Nalbone said. “There are cities in Texas that would kill for the water we have available to us in Tyler.”

SANITATION ADVANCES: From boiling to modern-day chlorination, clean water has long been a key to healthy societies.

Boiling water is the age-old way to sanitize water. The first writing of a water purification system was by Hippocrates, who is often considered the father of modern medicine.

“The first cleaning mechanism was called the Hippocratic sleeve - it was a cloth bag with sand in it. You would boil the water and pour it through it,” said Torey Nalbone, a water and air specialist and department chair of the civil engineering department at The University of Texas at Tyler.

Then came the middle ages and numerous cholera outbreaks in Europe.

In 1954, Dr. John Snow noticed people were very sick with Cholera near Bradstreet in England. He theorized it was due to the water and took the water handle off a water pump, forcing people to walk several blocks to another pump. The number of cases dropped.

By the time Tyler took over the Tyler Water Co. 100 years ago, the idea of water sanitation and its source as a healthy community was mainstream.

The Environmental Protection Agency and Texas Commission on Environmental Quality were nonexistent, but Congress had passed the country’s first environmental act in the Legislature - the Rivers and Harbors Appropriation Act of 1899. Among other things, the act prohibited dumping of certain materials in rivers, which were a steady water supply for a large number of U.S. residents.

That act became the basis for the Clean Water Act of 1972, Nalbone said.

But, as time went on, it wasn’t quite enough that the water was safe to consume. People wanted it to be palatable, too.

That included the sedimentation process, where sediments naturally in water settle to the bottom, leaving the water at the top free of debris.

That process has been around since the 1900s, but today plants use chemicals to expedite the natural process, making it more efficient.

Today, several thousand gallons of water can be processed in a minute, but previously, only about a gallon or two could be processed a minute, Nalbone said. Today’s processes use lime, activated carbon, alum and others to speed up the natural process.

The use of chlorine was a later development, which became widespread in the ’30s and ’40s.

“Chlorine itself as an oxidant didn’t come around as a beneficial use until later,” Nalbone said. “It was first recognized as a very toxic gas. Sodium hypochlorite, pool chlorine, was the first thing used until they could find an inexpensive and safe way to use gaseous chlorine.”