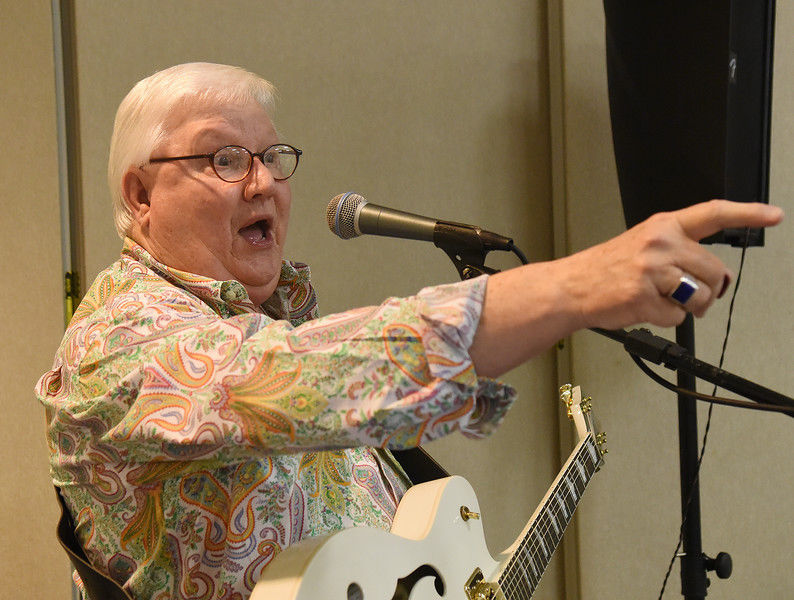 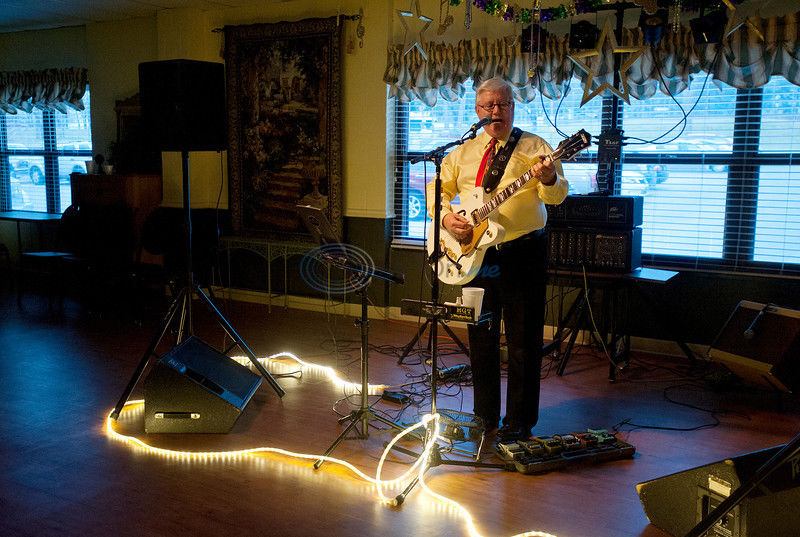 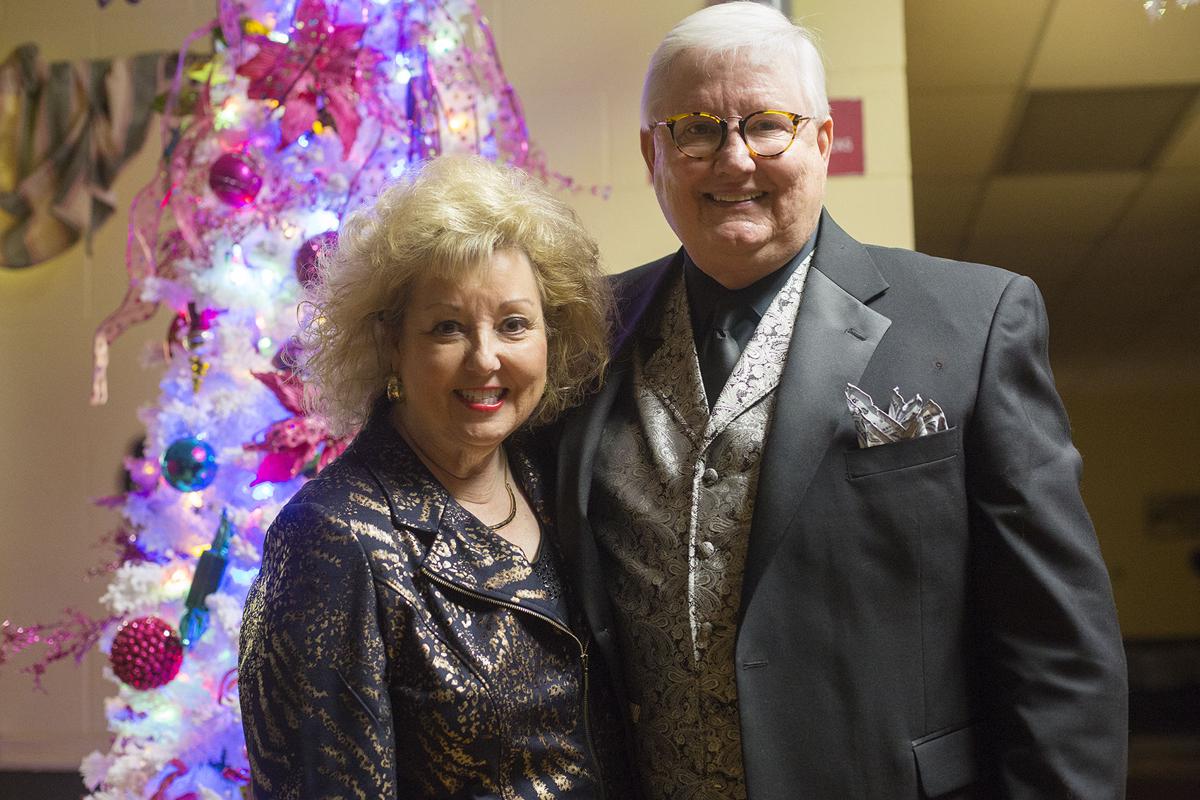 Kay and Patrick Odom are shown during a New Year’s party at the Tyler Senior Center in Tyler on Dec. 29, 2017. Guests enjoyed a dinner made up of traditional New Year’s foods and danced to live music. 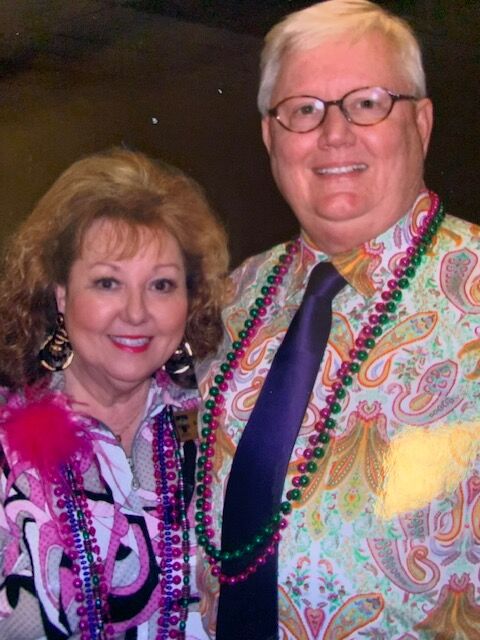 Kay and Patrick Odom pose for a photo together. Patrick Odom died at 72 on Jan. 10 due to COVID-19. He loved playing music for the senior living facilities and the Alzheimer’s Alliance of Smith County. 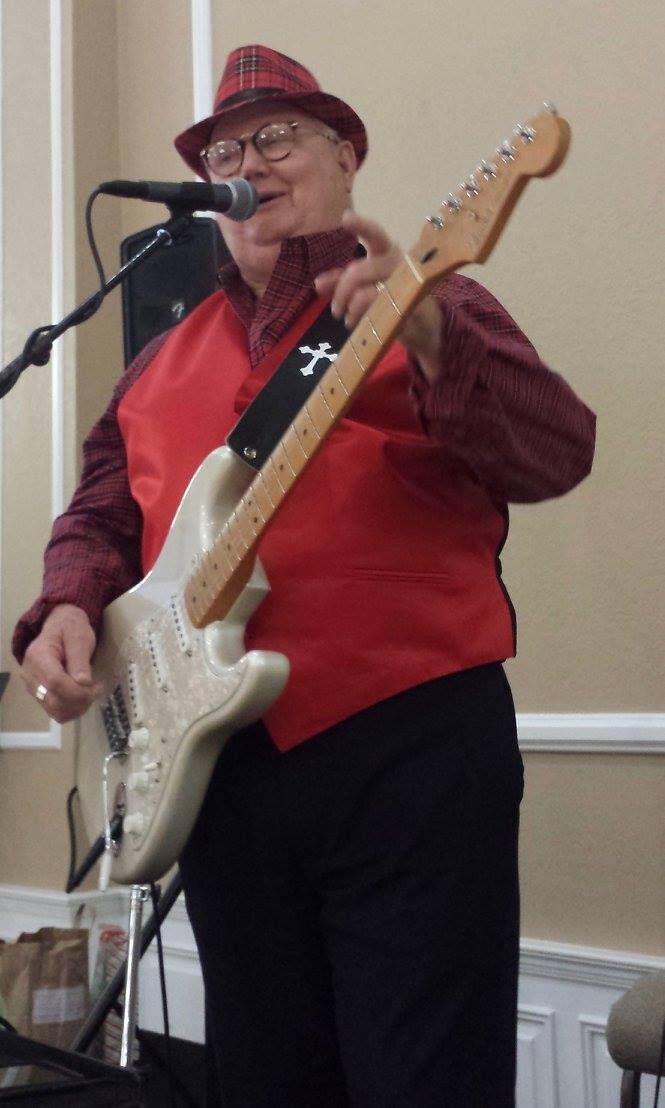 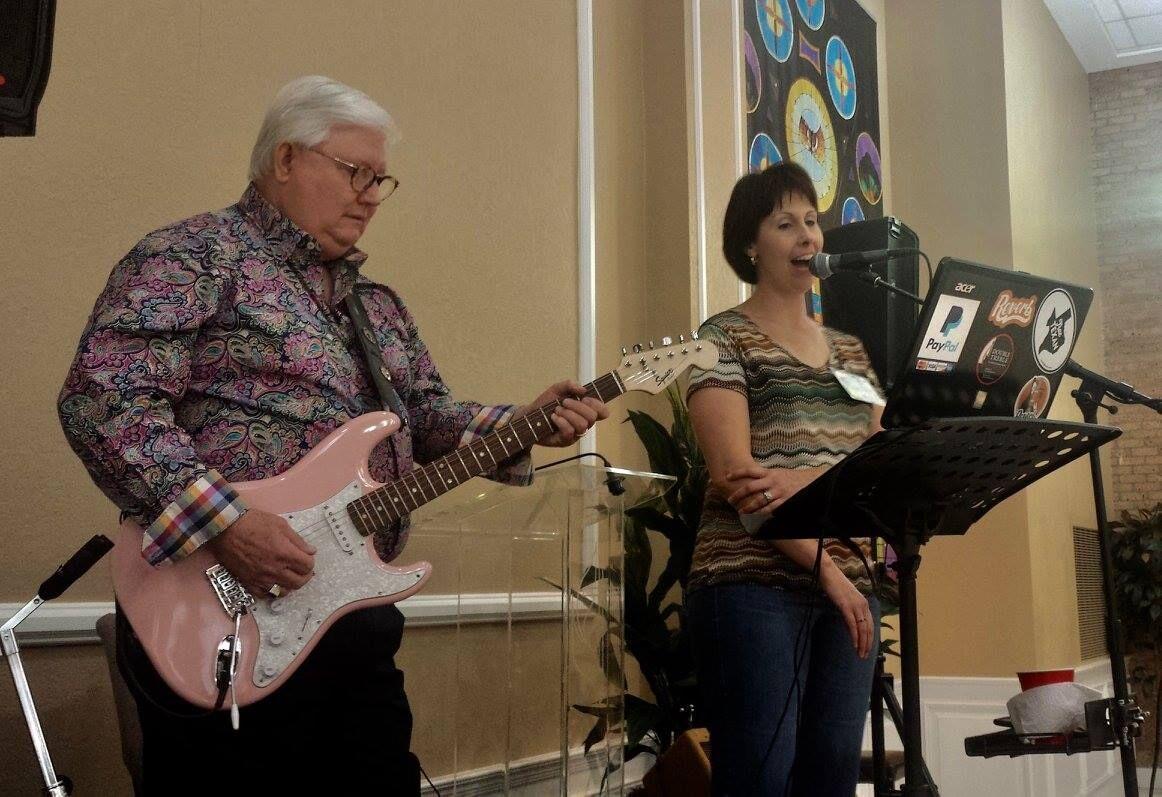 Patrick Odom begins to perform on stage while Jamie Huff, program director at the Alzheimer’s Alliance of Smith County, stands next to him during one of the alliance’s day club meetings to help people struggling with dementia. Odom died at 72 on Jan. 10 due to COVID-19. He loved playing music for the senior living facilities and the Alzheimer’s Alliance of Smith County. 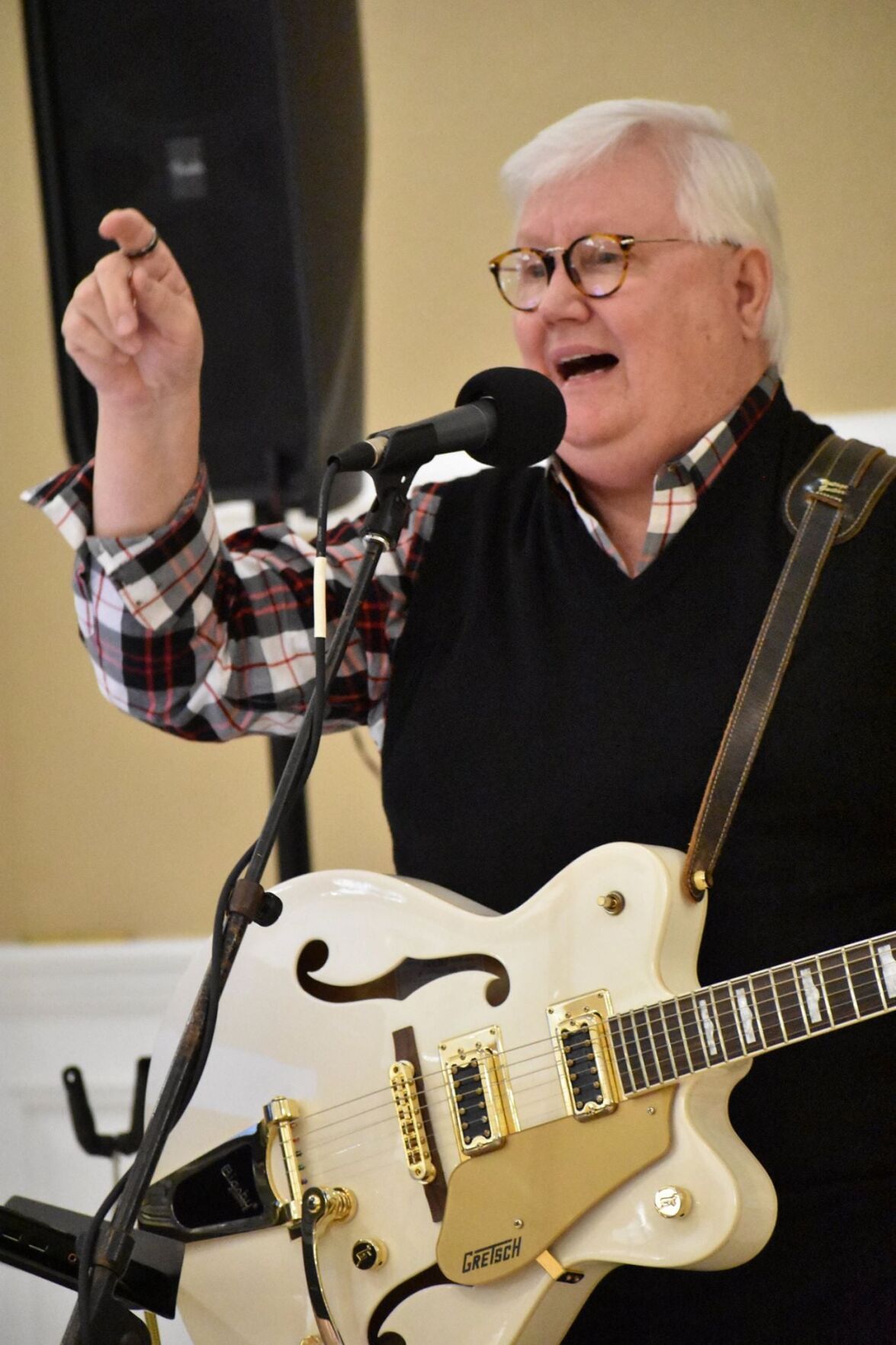 Kay and Patrick Odom are shown during a New Year’s party at the Tyler Senior Center in Tyler on Dec. 29, 2017. Guests enjoyed a dinner made up of traditional New Year’s foods and danced to live music.

Kay and Patrick Odom pose for a photo together. Patrick Odom died at 72 on Jan. 10 due to COVID-19. He loved playing music for the senior living facilities and the Alzheimer’s Alliance of Smith County.

Patrick Odom begins to perform on stage while Jamie Huff, program director at the Alzheimer’s Alliance of Smith County, stands next to him during one of the alliance’s day club meetings to help people struggling with dementia. Odom died at 72 on Jan. 10 due to COVID-19. He loved playing music for the senior living facilities and the Alzheimer’s Alliance of Smith County.

Patrick Odom’s music and personality were famous in Tyler-area senior living homes and the Alzheimer’s Alliance of Smith County. Through his strumming of the guitar and singing of the oldies over the years, he brought back memories and happiness for local seniors.

His wife, Kay Odom, and their daughter, Shawn Phelps, said he never met a stranger and that he was just full of life.

“You never met him without a smile on his face. He loved spreading joy through music, which was his passion,” Phelps said. “And he felt like it was his mission to bring some joy to nursing homes and the Alzheimer’s Alliance.”

Odom loved spending his retirement years at senior living facilities and seeing the joy in their eyes.

He was heartbroken when the COVID-19 pandemic stopped visitors from coming to the nursing homes or the Alzheimer’s Alliance Tuesday and Thursday day club meetings.

And after a lifetime of bringing joy to others, Odom, of Tyler, succumbed to COVID-19 on Jan. 10 after a few weeks of treatment at a hospital.

Kay, his wife of 16 years, described her husband as her everything, including her dance and sports-watching partner. She said COVID-19 attacked the weakest part of him — his lungs.

She said Patrick tried a ventilator the day before he died, but doctors called at 3:30 a.m. Sunday saying his vital signs were dropping. She and their children came to the hospital to say goodbye.

“That was the only time we got to see him,” she said. “The nurses said, ‘We knew he was waiting for you.’ COVID has taken my world. It took my husband away. It can happen in the blink of an eye. The one thing COVID can’t take is the memories and love from him.”

She hopes people can come together to get rid of the virus spread.

Both Kay and Patrick Odom had a passion for helping senior citizens. Patrick brought the music, and Kay is the supervisor for the Tyler Senior Center. Prior to COVID-19 precautions, he would play music for the Friday night dances at the senior center.

“You just have to listen and be there for those sweet seniors,” she said. “My husband and I lived our lives for the city of Tyler.”

Before retirement, Patrick worked in the corporate world as a software salesman at General Electric and Oracle for 35 years in Dallas. The Odoms then came to Tyler, where Kay’s parents were living.

The couple first met at John Tyler High years ago when she came from Baytown and he transferred from Longview High. In high school, their passion for dancing grew. After graduation in 1966, they found each other decades later at a reunion in 2005 and later got married.

“We teamed up and we danced at everything. We just loved dancing,” she said. “Dance is the total package. When my seniors are dancing, I know they’re in great shape.”

He also graduated from Stephen F. Austin State University in 1970, and later spent seven years in the Texas National Guard.

Kay said she and her husband did everything together, and she’ll miss the loving notes he left in her coffee cup every morning along with their dances.

All the attendees at the Alzheimer’s Alliance day club and nursing home residents loved Patrick’s music that he created all on his own, Kay said.

“He would say, ‘If the dance floor isn’t crowded, I don’t need to play the song,’” she said. “That is what he dedicated his life to, that’s where his passion and ministry really was. He had this way of opening Pandora’s box to people’s hearts.”

Jamie Huff, program director at Alzheimer’s Alliance of Smith County, said the day club meetings, also known as Terrific Tuesdays or Thursdays, would include four hours of trivia, guest speakers and music to bring happiness to Alzheimer’s patients and their caregivers.

Huff said Patrick was always involved in the day club meetings and loved getting people moving on the dance floor.

“Since I’ve been the day club director, he has played the guitar in one hour with singing and dancing. It was the favorite hour of each session for those folks. He will be greatly missed,” Huff said. “He played some oldies. He played a lot of things that the participants knew in high school, and so it was reminiscing for them.”

Huff added that day club activities give a dementia patient cognitive and social stimulation and the caregiver also gets a break to relieve stress.

“It’s a very powerful tool,” she said. “Music can touch a part of the soul that lasts till the very end.”

She described Patrick as an “excellent musician” who “really made a connection with people that had dementia.”

“Everybody knew Patrick in the senior care community,” Huff said. “His music and personality are just unmatched. He just had that unique connection with our folks. And he was fun.”

The loss of Patrick will have a huge impact for those who loved his music.

“We will miss the fun he helped facilitate and memories he helped invoke,” Huff said. “But Patrick would want us to continue singing and dancing so somehow we will.”

Kay recalled some of the seniors crying as he would sing songs like Tony Bennett’s “I Left My Heart in San Francisco” or when they would walk to their cars singing the tune of “Elvira.”

“For that short time, he was able to touch their hearts. Music is just the key to opening all the doors to their heart,” Kay said.

He would always say performing was not about him, but to help the seniors. He would often get videos of people dancing to his music.

“He went into a real depression this year because he missed playing for them,” she said.

Patrick was also a sharp-dressed man, who only wore the best, wonderful clothes, Kay noted.

“He was not just the best dancer and best entertainer, he dressed. He was the total package,” Kay said. “Style was certainly important to him, and he just shined wherever he went.”

She added that Patrick was a man of God as well.

Kay said the Alzheimer’s Alliance, local seniors and the city of Tyler have been extremely kind to their family in this time of grief. She calls the senior citizens and the city her family.

“My precious family has reached out. We’ve had food come every day,” Kay said. “There’s nothing we’ve had to want for. We’re just very, very blessed.”

Due to COVID-19 restrictions, a celebration will be held at Celebration Memorial at a later date. Memorials may be made to the Alzheimer’s Alliance of Smith County, 211 Winchester Drive in Tyler, or to alzalliance.org.

“But you, dear friends, by building yourselves up in your most holy faith and praying in the Holy Spirit, keep yourselves in God’s love ... ”