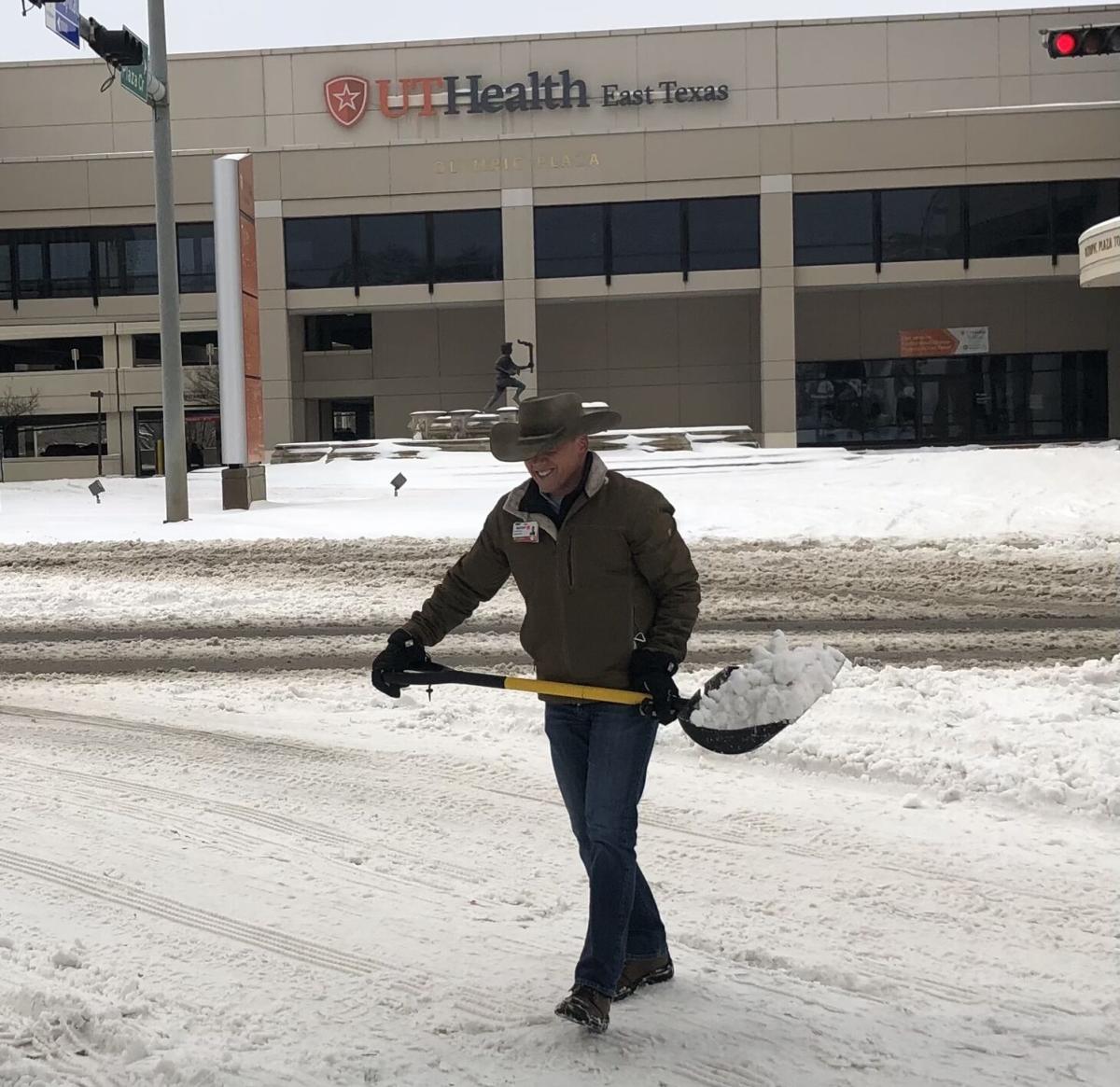 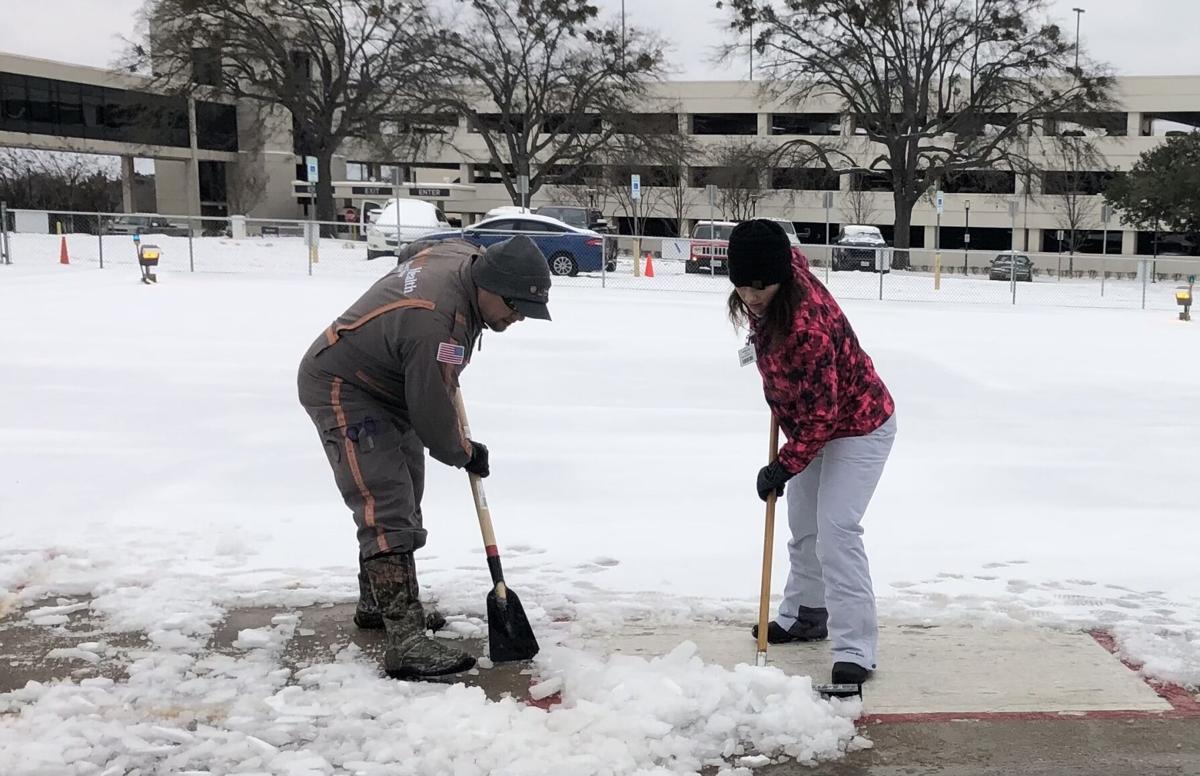 The AIR1 flight crew shovels snow and ice off the helipad at UT Health East Texas in Tyler. 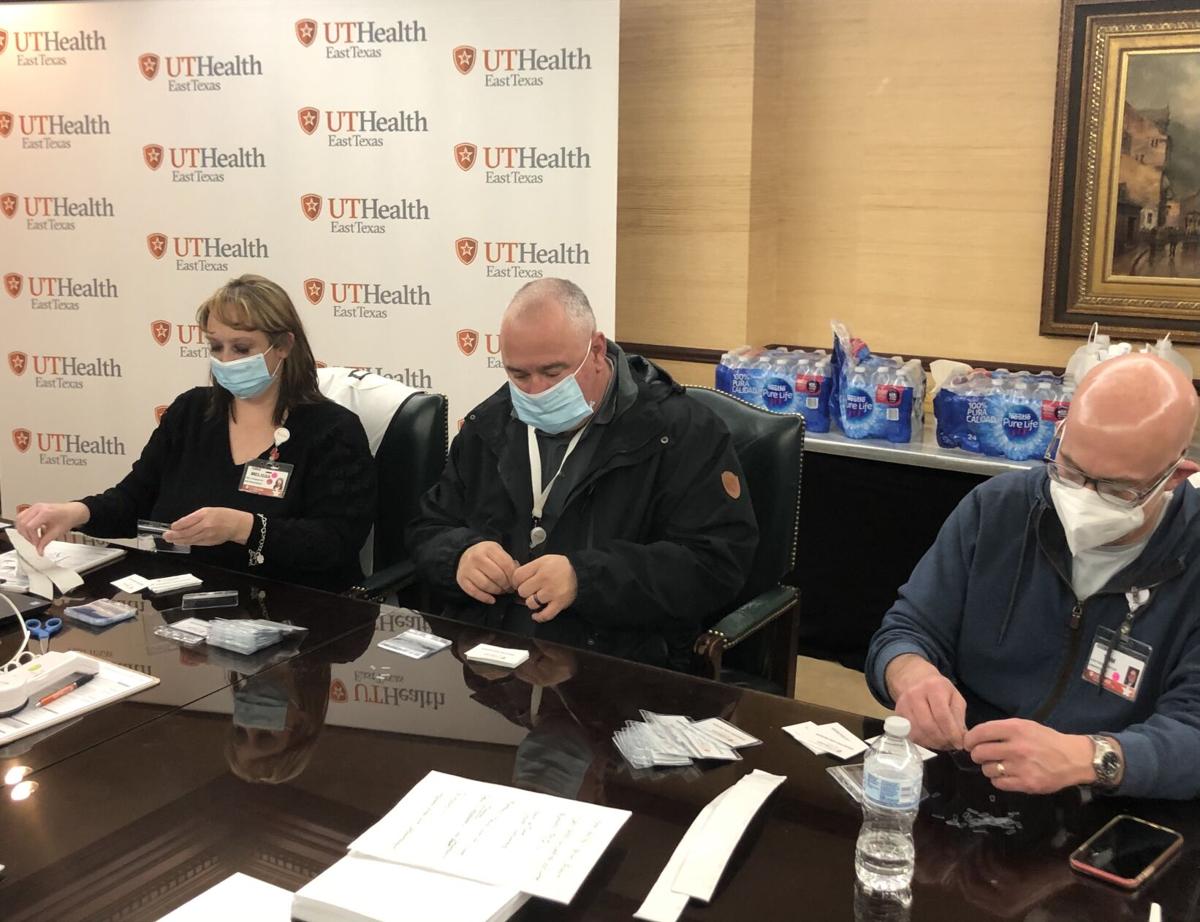 The UT Health East Texas leadership team assembles volunteer badges for volunteers who came in to help in any way needed.

The AIR1 flight crew shovels snow and ice off the helipad at UT Health East Texas in Tyler.

The UT Health East Texas leadership team assembles volunteer badges for volunteers who came in to help in any way needed.

For many health care workers at the Tyler hospitals, their workplace became another home this past week as the winter storm led to poor road conditions across East Texas.

She said the staff members came in ahead of their shifts to make sure the hospital would have enough employees.

“We knew that would be easier and safer. We started planning last week,” she said. “It just wasn’t even a question in our mind. It feels safe here.”

Throughout this week, UT Health employees have been coordinating rides for co-workers that were driving to their homes and work.

Community members also volunteered and got 50 to 60 employees safely to work, while places like Villa Montez, Brookshire’s and Cut Beef delivered food for workers.

Bowman said everyone’s been pitching in to make sure people are safe.

She loves helping people as a nurse, but is modest when talking about how she’s assisted others.

“I’ve always had a drive and passion to take care of people that are in vulnerable positions that needed me,” Bowman said. “To me, it’s just absolutely a part of the job. And when disaster hits, we step up to help.”

Bowman said she and other workers are thankful for both UT Health leadership and helpful community members.

“It’s absolutely incredible. East Texans tend to step up,” Bowman said. “When you think you’ve seen it all, a weather crisis hits the community. Nobody missed a beat.”

She wants the community to know how appreciative UT Health East Texas is for their support.

“The community always pulls through for us. It’s amazing,” Bowman said.

Ballard said on Friday that she’s been staying at the hospital since Tuesday.

“I live over 30 minutes so I felt like it was best for me to come in the night before the beginning of my shift, which was graciously offered to us,” Ballard said.

She added the biggest challenge has been not going home to their families, but knowing that she and her family were safe was for the best.

Christus workers were still able to decompress and relax after their shifts concluded, she said.

“We were able to care for our patients as we always do,” Ballard said.

Ballard said the hospital has not faced power or water outages, and some staff have been transporting people back to their homes.

“I think the message would be that rain, sleet, snow or shine our patients can come here for care and they’re always going to get great care,” she said.