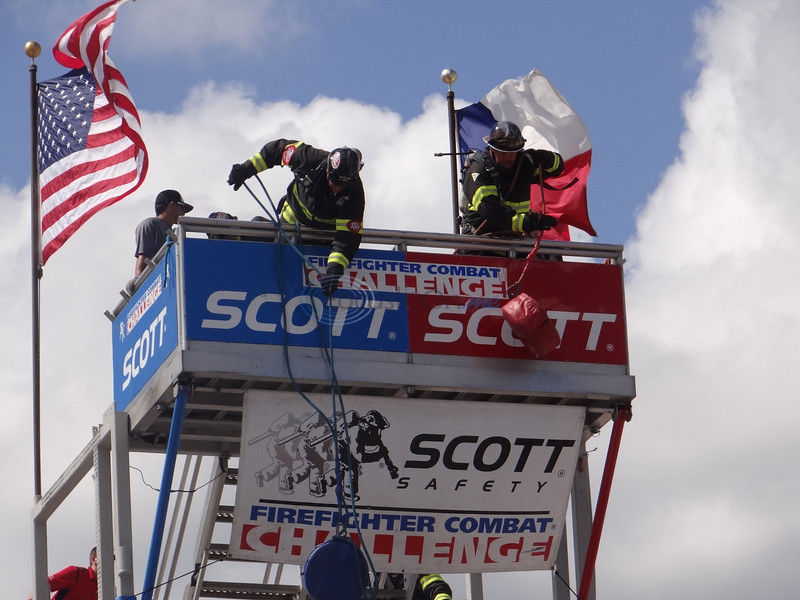 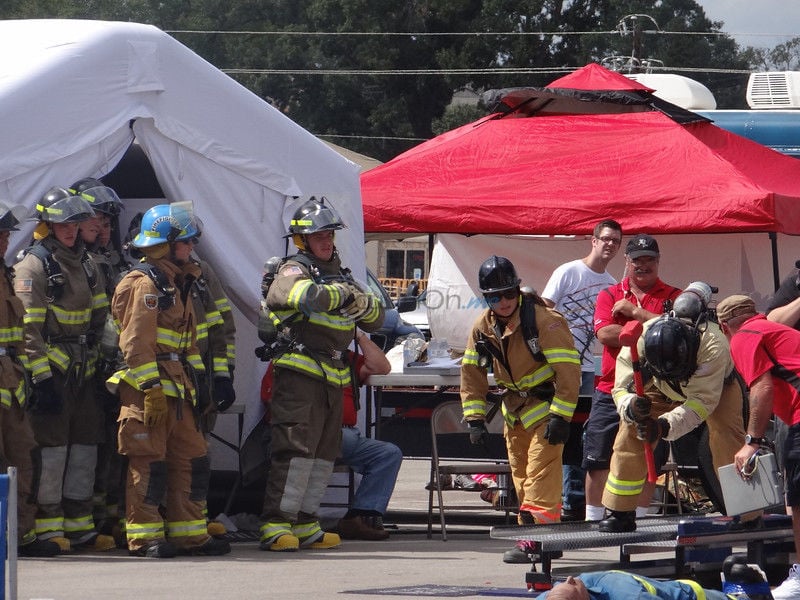 The next team of firefighters waits on standby while watching the race ahead of them on Saturday during the annual Brookshire’s Firefighter Combat Challenge at Broadway Square Mall. (Jarah Wright | Correspondent)

The next team of firefighters waits on standby while watching the race ahead of them on Saturday during the annual Brookshire’s Firefighter Combat Challenge at Broadway Square Mall. (Jarah Wright | Correspondent)

It's a hot Saturday afternoon as two teams of firefighters are neck and neck racing through the Brookshire's Firefighters Combat Challenge. The final two men pick up the 175-pound mannequin and hurry down the course. One of them falls 20 feet before the finish line as his competitor crosses the finish line.

Before his competitor can even take his gear off, every firefighter from both teams rushes to the fireman who fell, encouraging him to get up and finish the race. As he crosses, high-fives and congratulations are exchanged all around. Members of the Tyler Junior College baseball team watch the end of the race before helping reset the course.

"To see them work together and cheer each other to the finish line, it's motivating," TJC sophomore infielder Justin Monsour said. "You never really understand how athletic firefighters are, or how big and strong they are until you see them out here running up and down the stairs or carry a 175-pound mannequin. It's an eye-opener really."

TJC's assistant baseball coach, Travis Chick, said the team tries to help out with the Combat Challenge every year.

"We've done it for a few years now. Typically in the fall, we will do at least one community service project a month," Chick said. "The guys enjoy doing it. It's an easy way to give back and we like to find ways to get out there, help the community and serve those who serve us. It's also a way the guys can come out and see what hard work really is because what the firemen do is a team thing too."

Monsour said he sees similarities between the baseball team and a group of firefighters.

"The more time we spend together as a team, I think the better we play on the field because we know each other and we're brothers," Monsour said. "I think it's the same kind of dynamic with the firefighters which you can really see when they cheer each other on."

And there was lots of cheering as the crowd sat in the sun watching the races throughout the day. At least eight different events took place involving fire departments from Tyler, Palestine, Noonday, Irving, Prosper, Farmer's Branch, Oklahoma, Nebraska and New Mexico.

The Tyler Fire Department had a strong showing, taking home several awards including first place in the Over 40 Relays event and third place in the Open Relays event while also qualifying for the World Finals, which will be held in Las Vegas in three weeks. The overall winner of the regional event was the Carlsbad Fire Department from New Mexico. It was their second win in two weeks.

Other area fire departments qualifying for the World Finals were Palestine and Tyler Junior College.

As the day wound down, teams slowly dispersed through the parking lots to head home with finalist flags in their hands and memories of a successful weekend in Tyler.